Are we ready for a 'Caucasian Spring'? 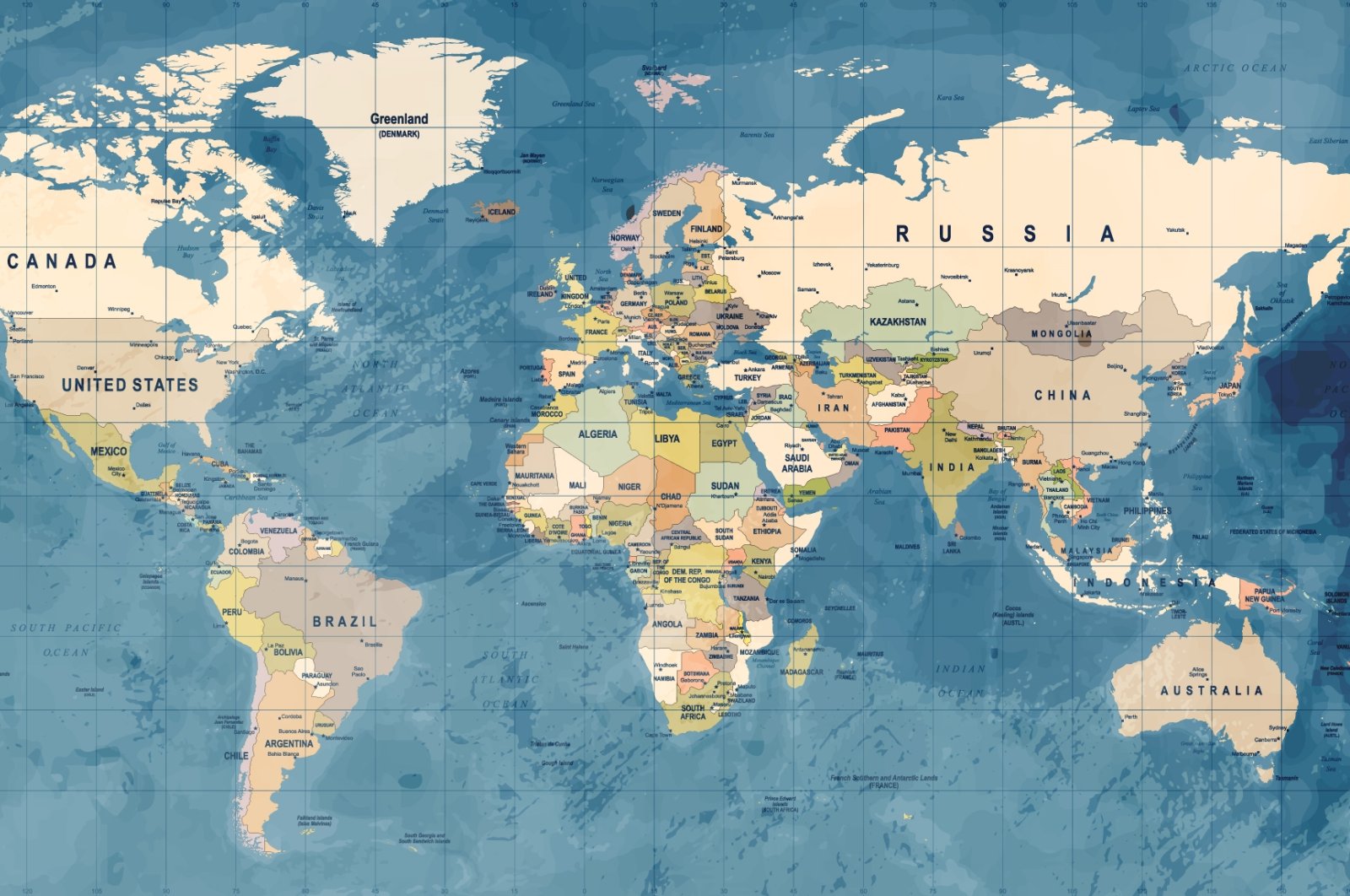 A series of uprisings and armed rebellions called the “Arab Spring” began in Tunisia on Dec. 17th, 2010, spreading to many other countries in Africa and the Middle East. These demonstrations and revolts in the Arab world caused the further deterioration of the institutional structures of states, and in some cases their complete eradication.

The traumatization or collapse of some states in this vast territory paved the way for an environment of severe instability where the full authority of a sovereign state does not exist. This eventually led to the formation and/or regrowth of global terrorist organizations such as Daesh, al-Qaida and the PKK/PYD.

As these terrorist organizations remain the main reason behind the instability in the Middle East and Africa today, external intervention by global powers to combat terrorism in the region and the forms of these interventions touched off a vicious cycle, constantly fuelling the instability.

The human tragedy in these parts of the world has become a chronic situation, in which people in Tunisia, Libya, Iraq and Syria are facing irrevocable changes to their way of life. Also, it is observed that the devastating waves of socio-political discontent and collapse are affecting all other countries in the region that are trying to survive in the midst of this chaos. Not only that, these waves are spreading from the Africa-Middle East axis to the Caucasus with each passing day.

As a matter of fact, all this socio-political turmoil is an indicator of the rising new global system. In today’s world, instability has become a monster that feeds those who created it while destroying others. We could say that the turmoil will not cease in the upcoming period either, considering that the new world order, shaped through both asymmetric and apolitical methods, has not yet reached its full balance, unlike the bipolar world order.

Taking into account the fact that China is the main factor that triggered the formation of a new world order, it would not be inaccurate to say that China is the ultimate target of this global state of great commotion and disturbance. Accordingly, it might be useful to analyze the upcoming developments of the axis of Middle East-Far East, which comprises Iran, Russia and China, as well as Turkey.

In this context, as Nicholas J. Spykman stated in his Rimland theory, the United States and some European states’ Eurasia policy is designed to encircle Russia and China. It could therefore be assumed that, after Africa and the Middle East, the Caucasus will be the new playground for many global actors. Western influence on Armenia, and on the axis of Southern Azerbaijan-East Turkestan, may ensure the encircling of Russia and China as well as the isolation of Iran.

It is a known fact that Russia and China, fully aware of the intentions of the United States and certain Western powers, have been cooperating for a very long time to keep the instability alive. For that purpose, both countries have been conducting military drills in the Eastern Mediterranean since 2014.

The fact that Russian intervention in the Syrian civil war began in 2011, and that Russia has significantly increased its military presence in the region since then is a natural result of Russia’s desire to maintain instability in the Middle East.

Similarly, unlike the U.S., NATO and EU, Russia sided with Turkey following FETÖ's failed coup attempt on July 15, 2016. This can be explained by Russia’s intention to fuel instability. We could say that the most important action, preventiveness-wise, was taken in 2018.

Russia, Iran, Azerbaijan, Kazakhstan and Turkmenistan, all sharing the natural heritage of the Caspian Sea, signed a deal on Aug. 12, 2018, designed to determine the status of the Caspian Sea, which is the world's largest inland body of water and holds large reserves of crude oil and natural gas, an estimated 50 billion barrels of oil and nearly 10 trillion cubic meters of natural gas beneath the seabed.

The fact this major problem in the Caucasus, with undeniable, long-term potential for conflict, was resolved in this very period proved to be quite functional indeed, in terms of preventing the African-Middle Eastern fire from spreading to the Russian mainland. Also, convincing all parties to sign an official deal, especially Iran, which had been quite obstinate about the status of the Caspian Sea, can be seen as a Russian diplomatic success.

However, thinking that this growing fire could be stopped with some sort of tactical collaboration turned out to be utterly wrong. Appointed as prime minister by the United States following the street protests that rocked Armenia in 2018, Nikol Pashinian brought Armenia to war with Azerbaijan two years after coming to office, causing the country to face a colossal defeat. Russian-Armenian relations have at no point been good since 2018 under the leadership of Pashinian, and it looks like they will not improve in the future either.

So, Russia, once the master of the Caucasus, is paradoxically caught in the middle. The process that began with Pashinian’s appointment as prime minister in 2018 in fact represents the power struggle between Russia and the United States (in a broader sense, between the East and the West) to seize domination over the western Caucasus.

Both countries are struggling to gain power over the west, east and south of the Caspian Sea and the North Caucasus, the part of Russia that is situated towards the main ridge of the Caucasus mountains, for their geopolitical positions.

The fact that Pashinian managed to stay in power after Azerbaijan’s Turkey-backed military success in Nagorno-Karabakh shows that U.S. foreign assistance to Pashinian still continues. With the open U.S. support, it was never in doubt that Pashinian would win the Armenian snap election scheduled for June 20, 2021. And the important thing here is that the United States continues to back Pashinyan despite Russia, who, on the other hand, is trying to build a barrier against the U.S. by deploying troops in the Karabakh conflict zone. As such, tensions still remain.

The artificial borders established by Russia in the Caucasus from 1924 to 1926 and Russian policy to make small nations under its rule dependent on each other by using various tools in a bipolar world eventually created a conflict-ridden area in the eastern Caucasus, called Fergana Valley.

An enormous intermountain depression lying mainly in Uzbekistan, Kyrgyzstan and Tajikistan, Fergana Valley is bordered by the Xinjiang Uyghur Autonomous Region, where the Uyghurs of Eastern Turkestan are subjected to crimes against humanity.

Fergana Valley has about 17 million inhabitants. Apart from its dense population, there are other problematic factors in Fergana as well. One of them is multiple “exclaves” that are struggling to exist in the valley.

Exclave refers to a part of a region or a country that is geographically separated from the main part by one or multiple surrounding foreign territories. For instance, Uzbekistan has four exclaves within Kyrgyzstan today while the latter has one exclave in Uzbekistan. Similarly, Tajikistan has one exclave in Uzbekistan and two in Kyrgyzstan. And what makes things even more complicated is that some of these exclaves are inhabited by different ethnic groups. For example, Uzbekistan’s Sokh exclave is mostly populated by ethnic Tajiks, which brings us to the conclusion that the Fergana Valley has a considerably complex demographic, political and social structure; hence, never-ending border conflicts.

Another important issue is water. The rivers of Amu Darya (Jay-hoon) and Syr Darya (Jaxartes) are two main sources of water in Central Asia. With its total length of 1,415 kilometers (879 miles), Amu Darya rises in Tajikistan and runs along the border of Afghanistan-Uzbekistan.

Tajikistan and Kyrgyzstan, on the other hand, with slightly less agricultural lands, control four-fifths of the available water sources. These two countries stay in control of the water flow by building dams and reservoirs on Amu Darya and Syr Darya, two critically important rivers in terms of providing sufficient water supply for drinking and irrigation, and power purposes. This whole situation intensely worries Uzbekistan as the world’s fifth-largest cotton producer and the world’s second-largest cotton exporter.

New crisis at the door

Another important factor that must be considered in terms of regional dynamics is the fact that the Fergana Valley is home to a large number of different ethnic and religious groups. This valley has been used by extremist organizations, especially after the dissolution of the Soviet Union in 1991, as a territory where they could conveniently flourish. Also, U.S. military bases have been founded in Kyrgyzstan, Uzbekistan, Tajikistan, Azerbaijan and Georgia during the U.S. intervention in Afghanistan following the Sept. 11 attacks.

In relation to these developments, Uzbek air space had been made available for the use of the U.S. forces on Nov. 12, 2001, along with a number of military and civilian airports. It is a known fact that Russia still has military bases in the region and is demanding more. The number of interventions that violate basic human rights in Eastern Turkestan is growing by the day.

If Fergana Valley, the power key of Central Asia, catches fire then the whole continent could burn. One cannot predict for how long China and Russia, both recently mediating to ease tensions over border conflicts, will continue this but I can certainly say that it will only take a spark to set off a new crisis in the region.

In conclusion, we could say that the traumatic processes that people in Africa and Middle East have been facing for a very long time are now being heavily experienced in the Caucasus as well. The only way to stop these tremors in the Caucasus, which have the potential of turning into stronger earthquakes, is for global powers to reach a consensus by finding a balance between what different people want.

However, history tells us that, oftentimes, consensus is not an option, especially in places majorly affected by global conflicts. In these days, where we are hearing the footsteps of a "Caucasian Spring," the impacts of the events transpiring in the region is another matter of discussion. But Turkey’s preparedness against possible crises, opportunities and other multi-directional outcomes that the Caucasian Spring might bring about is crucially important in terms of maintaining stability in the region.

Turkey has powerful influence over the Turkic-speaking countries in Central Asia and the Caucasus due to its historical, cultural, religious and ethnic ties with these nations. Therefore, Turkey opting for a proactive course of action in its multilateral policies vis-a-vis the important processes in the region seems like the most promising option both for our national interests and the future of the local people. The informal summit held between the Turkic Council Heads of States in Turkistan on March 31, 2021, and potential future summits might be the indicators that strengthen this promising option.