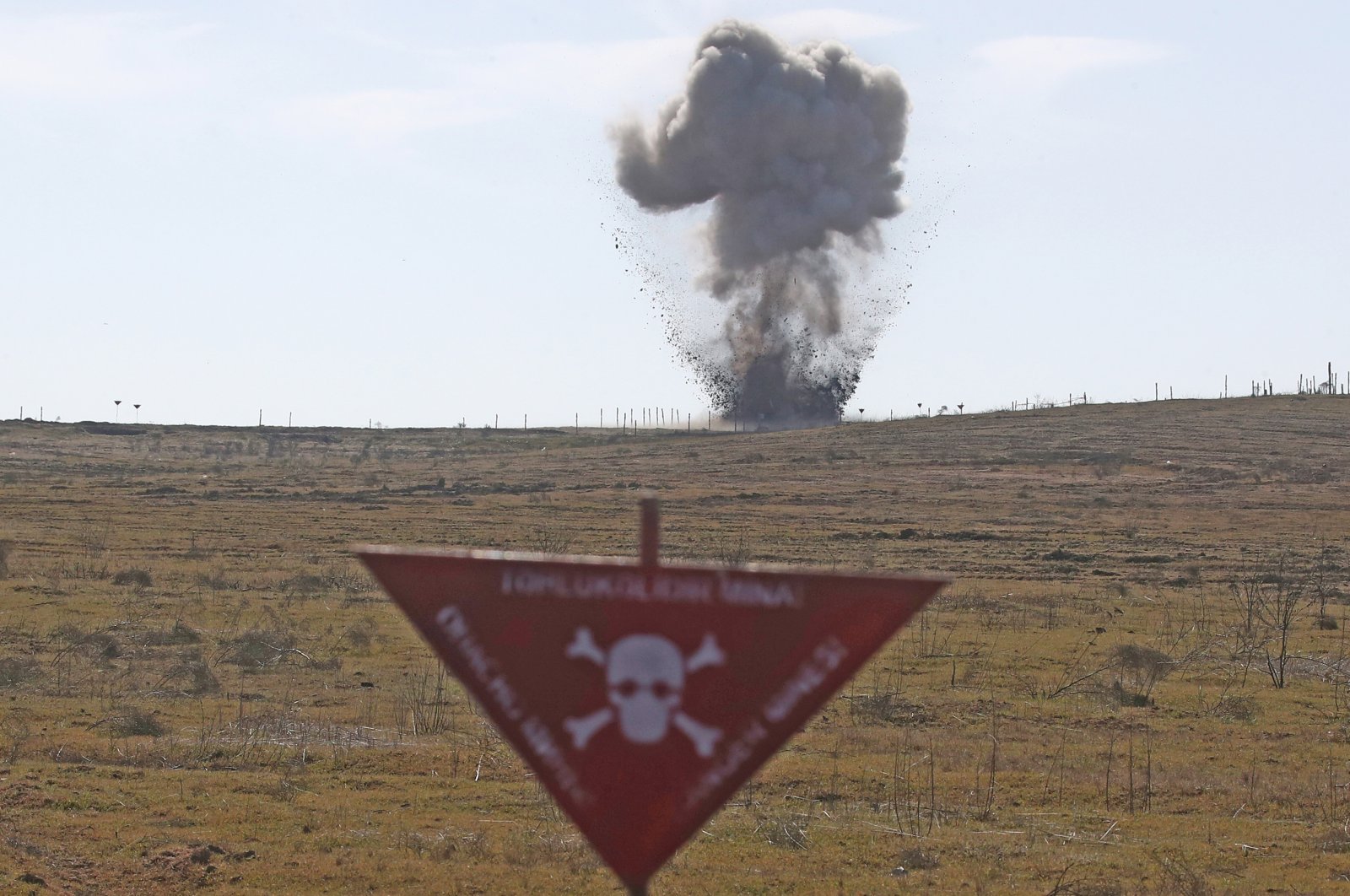 Unexploded ammunition is detonated during a demo mine clearing operation by the Azerbaijan National Agency for Mine Action (ANAMA) to further operations to clear mines previously planted by Armenian forces, Fuzuli, Azerbaijan, Feb. 27, 2021. (Photo by Getty Imags)
by Pat Walsh Jun 09, 2021 12:05 am

The latest mine explosion in Azerbaijan’s Karabakh marks another violation of international protocols. But since there is no organization to remove the mines, local authorities and officials are left trying to protect their own lands

On June 4, a mine explosion killed three people, including two journalists, who were traveling in the Kelbajar region of Azerbaijan, which had been liberated last year from Armenian occupation as a result of the second Karabakh war.

There is video evidence that seems to suggest the land mine was recently laid, probably by Armenian saboteurs who continue to infiltrate Azerbaijan’s territory.

Since the signing of the trilateral cease-fire agreement in November 2020, some 22 Azerbaijani citizens, including 14 civilians, have died, and 87, including 16 civilians, have been seriously injured as a result of mine explosions in the liberated territories.

In every respect Armenia’s presence on this land proved poisonous: Its possession of its neighbor’s territory ruined its own economy and led to a great exodus of its people; its incapability of doing anything in terms of development led Armenia to simply pillage Karabakh of its many resources, effectively leaving behind a wasteland; its desire to maintain a hold of territory without the means to sustain it meant that Armenia has traded its independence for dependency on Russia while its revanchist intransigence led to its ultimate military defeat.

Armenia proved incapable of trading land for peace during its occupation of Karabakh and surrounding districts. Instead, it destroyed and mined the territories it was incapable of developing so that no one else could enjoy the riches of the region.

It sowed a deadly harvest in the fields of Karabakh that has remained for long after it was forced to withdraw last year. These are the mines that continue the war after Armenia’s defeat.

This is Armenia’s legacy to the land it supposedly declares its everlasting love for.

Throughout the occupation and the conflict it brought on, mines planted by Armenia were consistently found across most of the occupied territories of Azerbaijan, including cemeteries, historical sites and civilian areas.

Since its defeat, Armenia refuses to provide information about the areas it mined, thereby deliberately endangering the lives of people.

This can only be seen as a cynical attempt to impede post-conflict reconstruction and much-needed humanitarian efforts in the liberated territories, as well as the safe return of the 750,000 internally displaced persons to their homes and land.

Under the specific rules of the protocol, anti-personnel mines must be equipped with self-destruction and self-deactivation mechanisms (Article 5) unless they are placed within a perimeter-marked area monitored by military personnel and protected by fencing to ensure the effective exclusion of civilians from the area, and must be cleared before an area is abandoned. Among their general obligations, states must take all appropriate steps, including legislative and other measures, to prevent and suppress violations of the protocol on territory under its jurisdiction or control (Article 14).

The problem with this protocol is who enforces it? There are no international mechanisms available obligating mine layers to cooperate in the decommissioning of the mines they laid. It has been left to the victim states to bear the human and financial costs of clearing up the dirty work of the perpetrators.

Azerbaijan found out in the course of three decades that while international law might be on its side, finding anyone interested in applying it was an entirely different problem.

That is not to say that international law is irrelevant. It is very useful in driving home a moral case internationally. When Azerbaijan won on the battlefield last year no one was inclined to support Armenia in view of its breaches of international law regarding Karabakh.

So international law is useful, but only as an adjunct to military force and politics, it seems.

The main reason why Armenia must hand over the maps containing details of its mining operations is because in terms of conflict resolution, Armenia’s attitude to its mines is a litmus test of its commitment to peacebuilding.

Mines are a particularly harmful weapon to peace and reconciliation. They effectively continue the war for years after its conclusion. Most weapons are decommissioned from a conflict once an armistice is signed.

However, by killing people continually, years after the conflict’s formal end, landmines maintain hostilities and hamper the building of good relations among different communities.

Azerbaijanis who cannot return to their homes and work their land again, who see their children killed by Armenian mines will not be enthusiastic about building good relations with their neighbors.

The international community could certainly help by pressuring Armenia into handing over the maps of their minefields.

Why does the U.S. Congress not attach this condition to Armenia for the receipt of further financial aid? Why does the EU not do likewise? Russia certainly has the power to influence the Armenian government on this matter.

This is not a punishment for Armenia. It would represent a valuable contribution to peace and reconciliation and the building of peace in the Southern Caucasus. That is surely in the interests of all, Armenian and Azerbaijani.