As Kabul falls, what is in store for Afghanistan? 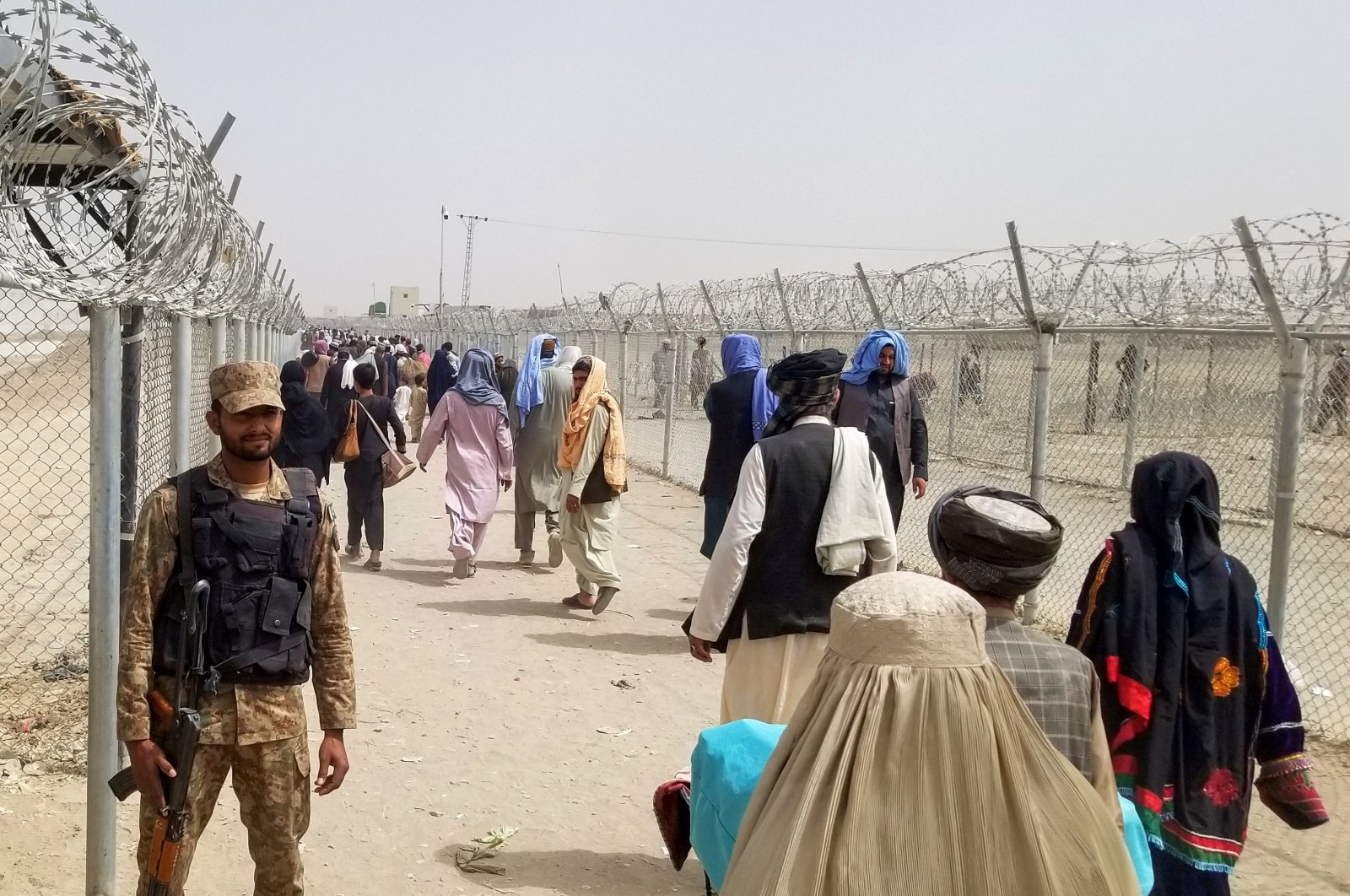 A soldier from the Pakistan Army stands guard as people arriving from Afghanistan make their way at the Friendship Gate crossing point in the Pakistan-Afghanistan border town of Chaman, Pakistan, Aug. 16, 2021. (REUTERS Photo)
by Hamoon Khelghat-Doost Aug 17, 2021 12:05 am

As Afghanistan falls under the rule of the Taliban, the fear that the country will once again turn into a safe haven for global terrorism is real

Coinciding with the ouster of Afghan President Ashraf Ghani and the capture of the Kabul presidential palace by the Taliban, the group announced the end of the war in the country. News agencies broadcasted images of Taliban members in various parts of the palace, confirming that the Taliban had taken control of the capital city.

The images show Taliban members lowering the country's flag inside the palace and raising their flag instead. This literally means that the power has been handed to the Taliban and the group is the new ruler of Afghanistan. The speed and violence of the Taliban sweep through the countryside and cities the previous week caught the American military and government flat-footed.

Two decades after American troops invaded Afghanistan to uproot al-Qaida, the American nation-building experiment failed due to misguided and often contradictory policies and a persistent insurgency whose staying power had been profoundly underestimated by the U.S. and Afghan military planners.

In an almost short period of four decades, the two world superpowers in Afghanistan were forced to swallow the bitter taste of defeat after costly wars and clashes. The Soviet Union spent more than $150 billion to maintain the occupation of Afghanistan, sacrificing more than 20,000 of its soldiers in a period of 10 years from 1979 to 1989.

The war in Afghanistan drained the Soviet Union and paved the way for the collapse of the super power. That war changed the fate of Afghanistan forever as well.

Statistics indicate that nearly 2 million Afghans lost their lives during the Soviet occupation in different clashes. That means up to 11% of the total population of Afghanistan died during the Soviet invasion of the country. More than 5 million Afghans were also forced to flee the country to survive that horrific occupation and its related clashes.

Nearly 10 years after the tragedy of the Soviet invasion, Afghanistan once again suffered a major setback when the United States decided to invade in the aftermath of the 9/11 attacks in the United States. During the years of Soviet and American occupation, various Afghan groups fought for control of Kabul, killing many Afghans and forcing many others to escape the country.

According to available statistics, during the 20 years of the U.S. occupation, nearly 50,000 civilians and approximately 66,000 Afghan soldiers were killed in the civil war. During the U.S. intervention, some 2.7 million Afghans were forced to emigrate, and about 4 million were displaced inside Afghanistan.

During this costly war, some 2,500 American soldiers were killed and more than 20,000 wounded. In addition, approximately 4,000 American contractors and private contractors also lost their lives in different parts of Afghanistan. The death toll among soldiers and other NATO troops is close to 1,200.

As Taliban fighters took Kabul on Sunday evening, roaming through the halls of the abandoned presidential palace, the group issued a statement: It would soon revive Afghanistan’s former name. The country that was built in the wake of the 2001 U.S. invasion at a cost of over $2 trillion would revert to the “Islamic Emirate of Afghanistan.”

No amount of American training and equipment was sufficient to create a security force willing to fight and die for a besieged nation that American forces were leaving behind.

However, can the new version of the Taliban (commonly known as the "Taliban 2.0") rule Afghanistan as in the 1990s? What are the possible obstacles ahead for the group in ruling the current Afghanistan?

If the Taliban do not address the serious concerns of many Afghans about their strict style of governance and do not amend their extremist strategy and ideology, they are more likely to face popular opposition in near future.

It has been about 20 years since the fall of the previous Taliban government. Over these years, a new Afghanistan has emerged and there are clear signs of socioeconomic change and growth in Afghanistan's urban areas. Governing Afghanistan like the 90s is not viable anymore.

However, many in the West and Afghanistan are banking on the fact that the Taliban movement has changed and that, having failed to defeat them militarily, it is time to embrace them. The Taliban 2.0 is described to have changed and have acknowledged its past mistakes with women’s education, their relations with the world and in harboring terrorist groups.

However, in reality, the Taliban still rule through fear, heavily tax local populations, close down schools in areas they control, have no representation of women and provide few public services. To properly rule Afghanistan, the Taliban have a long way to go to prove the changes they claim.

In the past few years, there has been a significant improvement in the education sector of Afghanistan with thousands of Afghan students pursuing higher education in their hometowns throughout the country. It is estimated that about 22 million Afghans have access to internet services.

Statistics indicate that up to 65% of Afghanistan's population are young people. It is very unlikely this population will tolerate the Taliban’s strict interpretation of Shariah, or Islamic law, without resistance.

The young Afghan generation is fully aware of the Taliban’s state narrative and its oppressive approach, and it is likely that now that the Taliban have returned to power, they will resist and fight to defend their current social way of life in spontaneous movements.

This resistance could, unfortunately, lead to further instability in Afghanistan and yet, could also become a major obstacle to the Taliban's complete domination.

As Afghanistan falls under the rule of the Taliban, fear that the country will once again turn into a safe haven for global terrorism is real. Like a couple of decades ago, Afghanistan is at risk of converting into a hub for exporting terrorism and fundamentalism to the region and beyond.

There are already several other active terrorist organizations such as Daesh in the country and the rule of the Taliban can intensify their destructive activities.

The Taliban currently consider themselves unique among all the other extremist groups in having defeated the United States and forcing it to negotiate an exit. This has made the group quite popular and a center of gravity within the radical world.

Despite the group’s positive propaganda, at this stage, the Taliban hardly believe that change is necessary and have no incentives to acknowledge the realities of the new Afghanistan.

At the same time, the Taliban have also failed to announce a specific plan for the future of Afghanistan. That means that the group does not have a clear agenda on how to restore the rule of law, service delivery and legitimacy to rule.

At the same time, the world community is optimistically hoping that the challenges of governing Afghanistan in practice force the Taliban 2.0 to adopt more pragmatic approaches for governing the country. This is expected to open doors for the international community to initiate constructive negotiations with the group.

The possible instability caused by the rule of the Taliban can also trigger a new massive wave of migration from Afghanistan to neighboring states. Media reports indicate that Kabul Hamid Karzai International Airport is still in complete chaos, and although the United States has claimed control of the airport, images posted on social media show otherwise. There are thousands of Afghans marching toward the country’s borders to leave Afghanistan as soon as possible.

Countries such as Iran and Turkey are likely to once again face millions of refugees at their gates. The costs of the upcoming crisis in Afghanistan will certainly burden the neighboring countries the most.