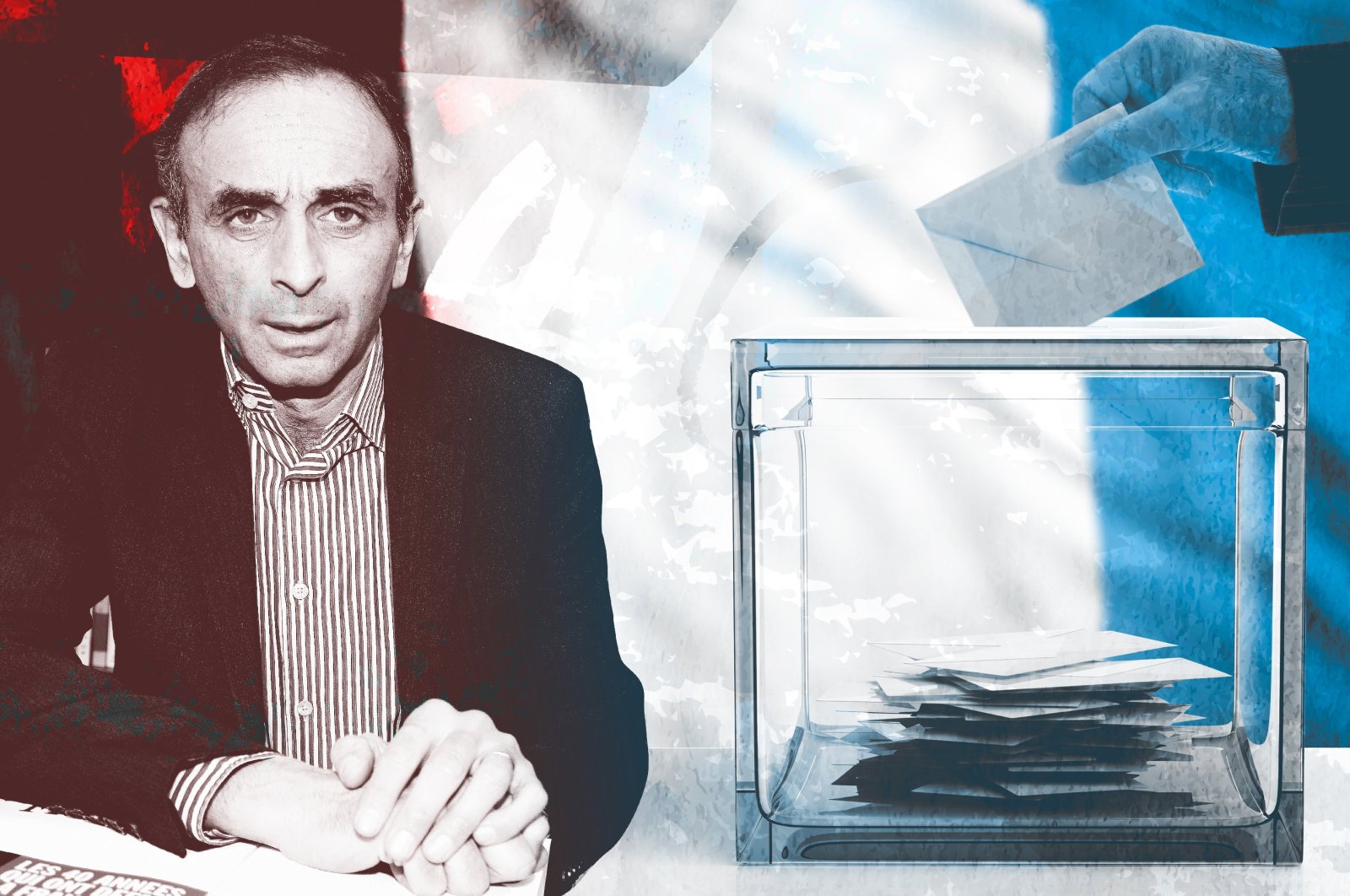 In the French presidential elections, Muslims make up a very small proportion of the electorate. However, Muslim votes should not be underestimated, especially by Islamophobic figures like Zemmour

France is facing a substantial leadership crisis and a dearth of political ideas and movements. In light of the presidential elections to be held next spring, there is no clear frontrunner nor an underdog, a political mood that has provoked blurry political progress. However, with these alarming elements, an undeclared hysterical political campaign has set the tone for the voters in the coming seven months. Analysts argue that France has the opportunity to reshape its politics, and reach out to voters who are totally shunning the conventional political parties, as a result, they are lost in the populist discourse of the darling boy of anti-Muslims and Islam voices in France, Eric Zemmour.

Throughout the ongoing undeclared campaign, different visions of the declared and undeclared candidates like Zemmour can be seen. The controversial journalist, Zemmour, who is loudly imposing his posture as a political and "image" adviser on national TV, radio talk shows and print, as was seen in the latest Paris-Match Magazine’s front page, has a message based on two words: Islam and immigration. In his recent book, "La France n'a pas dit son dernier mot" (France did not say its last word), he expresses the wish to reinvigorate Napoleon’s 1803 law, to ban all Muslim names and replace them with Christian ones.

Zemmour is a phenomenon that has become a political reality thanks to the media. He positioned himself in the political “debate” as a credible and audible voice for the anti-Muslim and Arab voters. The question of racism in France politically has slipped from its ethnic expression to a religious imperative post the so-called controversy in the country over the scarf known as l'affaire du voile (the veil affair) of 1989.

Ever since, the French right, far- and extremist-right politicians and voters have been in conflict with Muslims in France. Where the question is no longer taboo in the French political and media lexicon, on the contrary, it has become a banal scapegoating tactic used by politicians and pundits.

How are the Muslim voters responding to Zemmour and the far-right propaganda machine? Muslim voters are divided: They vote according to their ideology, social status, ethnic origin and demography. Though those who are active on social media, for instance on Twitter, are blaming the media and the political establishment for letting Zemmour take a free ride. The leader of the leftist party la France Insoumise (LFI), Jean-Luc Melenchon challenged Zemmour in a debate, Melenchon tried to slow down Zemmour’s rolling bulldozer truck.

The rise of Zemmour in national opinion polls is, however, traumatizing for both potential contender candidates in the run-off to next spring's election: incumbent President Emmanuel Macron vs. Marine Le Pen, the leader of the National Rally Party (RN), according to the leading national polls since last summer. A remake of the 2017 presidential election that Macron is desperately praying for!

Nonetheless, seven months in politics is an eternity, the surprise effect factor is still valid and French undecided voters are still waiting for the providential man to show up.

Following the Zemmour factor, Marine’s confusion and Macron’s panic mode, how would Muslims vote in the next spring presidential election? This thorny question raises the paradoxical Muslim vote’s orientation in French elections in general. Basically, Muslim voters are willing this time to go en masse and vote for Melenchon who appears to be their “champion” – nevertheless, Muslims in France are not organized in one political block for the reasons stated earlier. They do not constitute an electoral block either.

Prisoners of the semantic and politics

Semantically, before one speaks about the Muslim vote, it should be said that the Muslim “community” is a victim of its communities’ leaders and recently of the republic's new laws that aimed to domesticate Islam in France in general and French Muslims in particular.

Consequently, there is no single Muslim community in France, but there are Muslim communities whose votes tend to be divided among the contenders. In medium-sized cities, the majority of the Muslim

vote goes to RN candidates while in the so-called immigrant hubs (banlieues) of large cities, and in the main large city administrative districts, the Muslim vote is split between left-wing and ecology candidates and the Republicans Party (LR). This is the most ideal scenario that one could hope for because in the last municipal and regional elections of summer 2020 and spring 2021, one out of 10 Muslim voters did not even bother to register to vote, notably, mostly the youth and first-time voters who recently became eligible to vote.

For this reason, the Muslim vote should not be seen as a religious vote but rather as a social and demographic one like the rest of their fellow citizens, who are highly cynical about politics and politicians. According to a survey conducted by Institut Montaigne Parisian think tank, and the French Institute of Public Opinion (IFOP) in May 2016, there is no Muslim community in France. There are French citizens who share both Muslim culture values and faith, hence implicitly Muslims in France and in particular, the third generation of those originating from Sahel and Maghreb countries, are stuck in the dichotomy of identity and origin.

This is a clear observation among the youths. Muslims over the age of 18 represent around 6% of the French 67 million population, among the 6% only 69% are French citizens. Some 87% of voters living in France are registered to vote, therefore, the Muslim vote represents 3% in France. However, only two-thirds of Muslim voters participated in the 2012 presidential election, which amount to 2% of the French population, 24% abstained and 8% cast a blank ballot. Out of the 36 million who voted in 2012, 1.3 million were Muslim.

In 2012, 86% of Muslim voters voted for the Socialist candidate Francois Hollande in the second round, he was elected with 51.56% of the votes. One could see that the Muslim vote played a part in Hollande's victory. Eighty-six percent from 3.6% amounts to 3.1% of the total vote. It’s likely that many of these voters cast their ballot for Jean-Luc Melenchon in the first round.

In 2017, there was a very high turnout of Muslim voters at 62%, and 92% voted for the candidate of La Republique En Marche (LREM), Macron. According to Opinion Way, Macron got 2.1 million of the Muslim

votes, whereas his opponent Le Pen got 200,000. Subsequently, without the Muslim vote, Hollande would have had been beaten in 2012 by ex-incumbent President Nicolas Sarkozy and Le Pen would undoubtedly have come out on top in the first round of 2017.

Analysts are estimating that in the next presidential election in April 2022, the Muslim vote will undoubtedly make up around 10% of the votes. This means that the candidate who does not benefit from this vote would have to get about 60% of the non-Muslim votes to win. An assumption that can already feed the strategies of political campaign managers, who are unfortunately not paying attention to the Muslim vote, especially the right, far- and extreme-right and even Macron’s party and government. Managers of these candidates are doing everything to alienate Muslim votes further. Because of purely political calculation, genuine manifestation from the far and the extreme-right candidates, and finally electoral gesticulation from the government, one could argue it’s a first round strategy’s complex communication politics.

For a long time, Muslim voters have been taken for granted by the left and not taken into consideration by the right. Yet, the next election could be decided in favor of the popular hard-working banlieues by the majority of well-integrated Muslims that are regularly targeted by the fringe of right-wing candidates and voters. They are blaming Muslims for their misery, linking domestic security issues to immigration and Islam.

In sum, the Muslim vote is not a religious or ethnic vote of an unjustly stigmatized minority that finds itself in a new electoral equation of abstentionists and rejectionists. The France of Zemmour could face more division and diversion, which is hurting France’s sacrosanct “universalist” values, encouraged by the right and the far-right leaders and elite. In such a context of political uncertainty and high socioeconomic, health care and geopolitics anxiety, French voters are preparing to vote for their next president. This time the majority of Muslim voters will have their say.