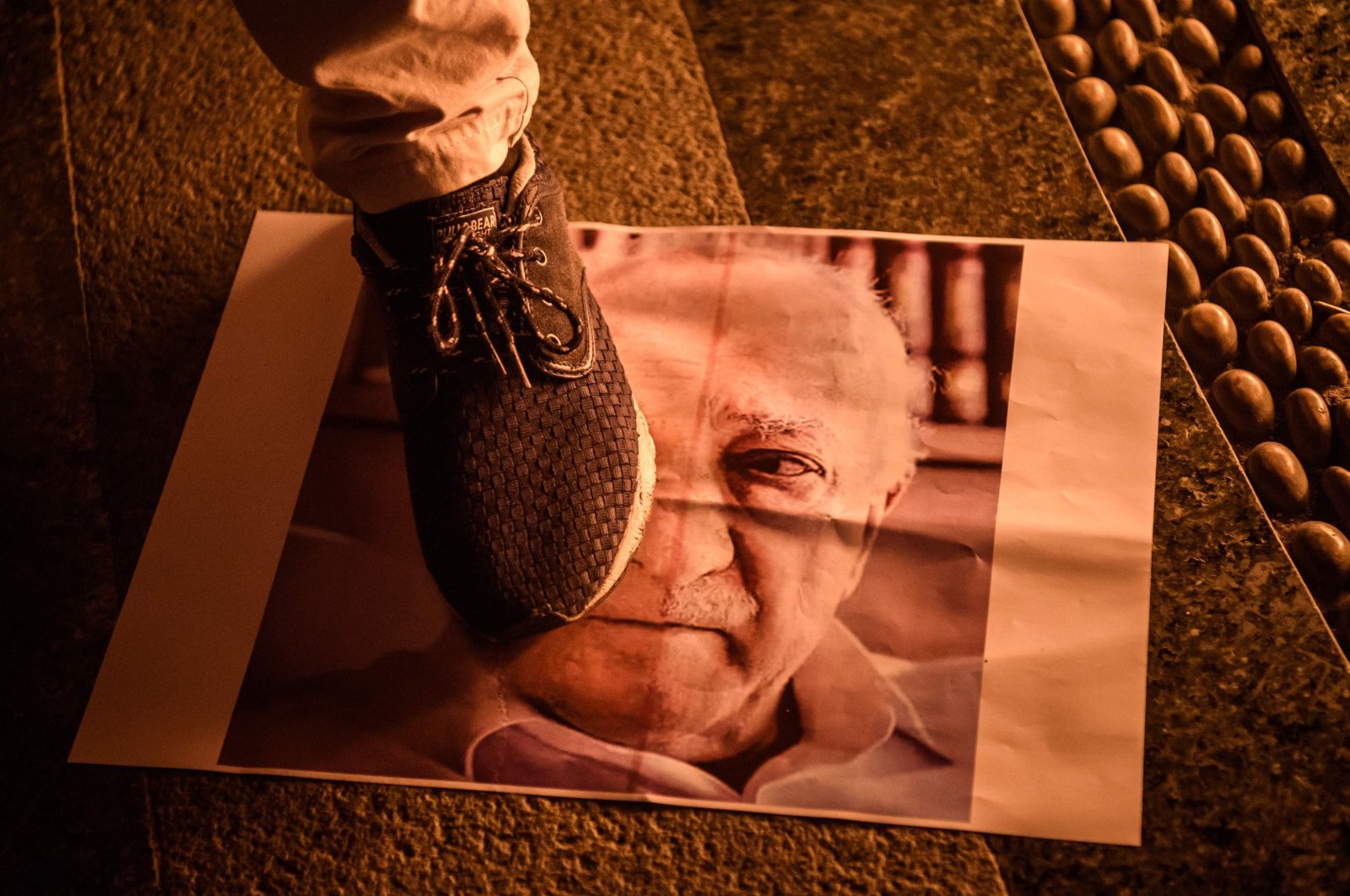 A protestor walks on a poster of U.S.-based Fetullah Gülen, the leader of the Gülenist Terror Group (FETÖ), during a demonstration, Istanbul, Turkey, July 18, 2016. (AFP Photo)
by Robert Amsterdam Feb 22, 2021 12:05 am
RECOMMENDED

During this particularly challenging period for U.S-Turkey relations, it can be quite frustrating to witness the interference of outside special interests seeking to deepen divisions. But that’s exactly what we’ve seen happen with the recent Feb. 9 letter to President Joe Biden signed by Sen. Ron Wyden and Sen. Marco Rubio, among others.

The letter contained the usual overly simplified and misleading list of complaints which we have become used to, but there was also specific language bearing the fingerprints of the Gülenist Terror Group (FETÖ).

Despite having experienced their own (thankfully much less violent) insurrection only one month earlier, the U.S. senators argued that Turkey was somehow guilty for seeking accountability of coup perpetrators living in the United States while describing the celebrity Gülenist athlete, Enes Kanter, as a “human rights advocate” – evidently showing their total lack of awareness of Gülen’s atrocious human rights record in Turkey.

This wasn’t the first time that we’ve seen U.S. politicians at the state and legislative level exhibit casual naivety toward the Gülenist network – but one may ask, why does this keep happening? The answer lies in the system itself and the sophisticated machinery by which his charter school empire is able to seize control of federal and state taxpayer funds and in turn recycle part of those proceeds back into lobbying and campaign contributions.

By the time Gülen had arrived in the U.S. in 1999, he found a system ripe for exploitation, particularly vulnerable to his organization’s methodology of "takiyye," the patience of hiding their members in plain sight and worming their way deeper and deeper into the hierarchies of influence.

The ideological commitment to charter schools in the U.S., certainly among the Republicans but also among large sectors of the Democrats, created an environment of almost zero accountability for bad operators, including those who may – for example – choose to import all their teachers from abroad and self-deal most of their contracts to their own firms to generate hundreds of millions of dollars in profit every year.

To be clear, this has become possible because the U.S. is a federal system that has uniquely deferred the oversight of education as a state issue. This has allowed each state to implement its laws concerning charter schools, which in turn resulted in a conflicting patchwork of legislation and poor oversight, opening numerous gaps for FETÖ to exploit.

States like Texas, home to more than 50 Gülenist charter schools, and Florida, Illinois, Ohio and Arizona are known for a lack of transparency when it comes to establishing new charters and allowing for rapid expansion. An independent investigation of charter schools in the U.S., conducted by the Network for Public Education, found a troubling pattern of "insufficient applicant review, contradictions between information provided by applicants and available public data, the gifting of funds to schools with inadequate financial and governance plans, a push-out of large grants to the states with little supervision by the department and the waste of hundreds of millions of taxpayer dollars."

In fact, when serious problems are discovered, there are many policymakers who prefer to turn a blind eye for fear of being perceived as “anti-charter.” With this level of impunity, charter schools like those in the Gülenist franchise have taken advantage of the situation to pursue scams such as wildly inflated real estate deals and rampant hiring of affiliated vendors at noncompetitive rates without government intervention.

Education boards have proven themselves to be without teeth and to date, have been unable to force schools into complying with best practices or following state law with any real fear of retribution. Only a very few states have been able to successfully remove the schools after they had been approved. Numerous schools were forced to close after damaging audits revealed Gülen’s scheme in both Georgia and Alabama. Despite the findings, no other state government has followed the path set by these investigations.

Gülen and his co-conspirators immediately recognized the opportunity to protect their racket via influence with the public sector at every level, which is why they established more than a dozen front nongovernmental organizations (NGOs) and charities whose main focus of work appeared to be award ceremonies for their targets of flattery and lavish foreign travel junkets. Illinois House Speaker Mike Madigan, who was recently forced to resign amid an entirely separate corruption investigation, took no fewer than four of these trips abroad paid for by the Gülenists at the same time he oversaw the creation of the commission that granted them charters, and in turn, his son’s insurance firm ends up with charter school contracts. The American dream is alive and well in Gülen’s charter universe.

As international lawyers retained by Turkey to investigate FETÖ's unlawful activities in the U.S., we responded to the senators with a letter pointing out exactly how they are being misled by the Gülen influence machine and why they should be urgently concerned not only about the threat they pose to Turkey but also how they are ravaging and pillaging the U.S. public education system.

For some, it may come as a surprise that the Gülenists continue to flex their muscles in Washington, especially after the humiliating series of events over the past few years. One of his top lieutenants, Kemal Öksüz, was indicted and convicted on charges of lying to the U.S. Congress about paying for illegal travel benefits for U.S. politicians. Following a highly successful FBI investigation, one of his top charter businesses, Concept Schools, agreed to settle with the Department of Justice and pay millions of dollars on charges that they had violated the law through their infamous noncompetitive bidding practices. Numerous new charters sought by Gülen schools have been rejected, including a revocation by the state of Alabama, while the National Association for the Advancement of Colored People (NAACP) has called for an investigation into civil rights violations by the Gülen schools. Whistleblowers are coming forward with testimony about rampant fraud and abuse. For the first time, fear has given way to anger, and some are allowing their names to be used.

The new Biden administration has a dramatic anti-charter school bend. This is part of a new charter accountability movement that is occurring in all sectors of American government, many of the members of which have worked with our firm over the last number of years in bringing to light Gülenist practices of self-dealing, visa fraud, testing fraud and widespread racial and other forms of discrimination. This task will be greatly aided by the publication in April of Volume 2 of "Empire of Deceit," which explains and outlines some of Gülen’s lobbying practices in the U.S.

There is a great deal more work to do to educate U.S. lawmakers on who these people really are. The irony is that a Gülen organization based in the U.S. is corrupting American politicians on the state, local and federal levels with funds that should be used to educate American children. Sadly, the corruption that poisons American politics continues to poison the relationship between two important allies.

Lastly, a country that cages children for the crime of illegal migration should learn humility when addressing a country that quietly absorbed well over 3 million desperate refugees without complaint. It is time for America to look at itself in the mirror before lecturing anyone.