Is it possible for Taliban to be recognized as a state? 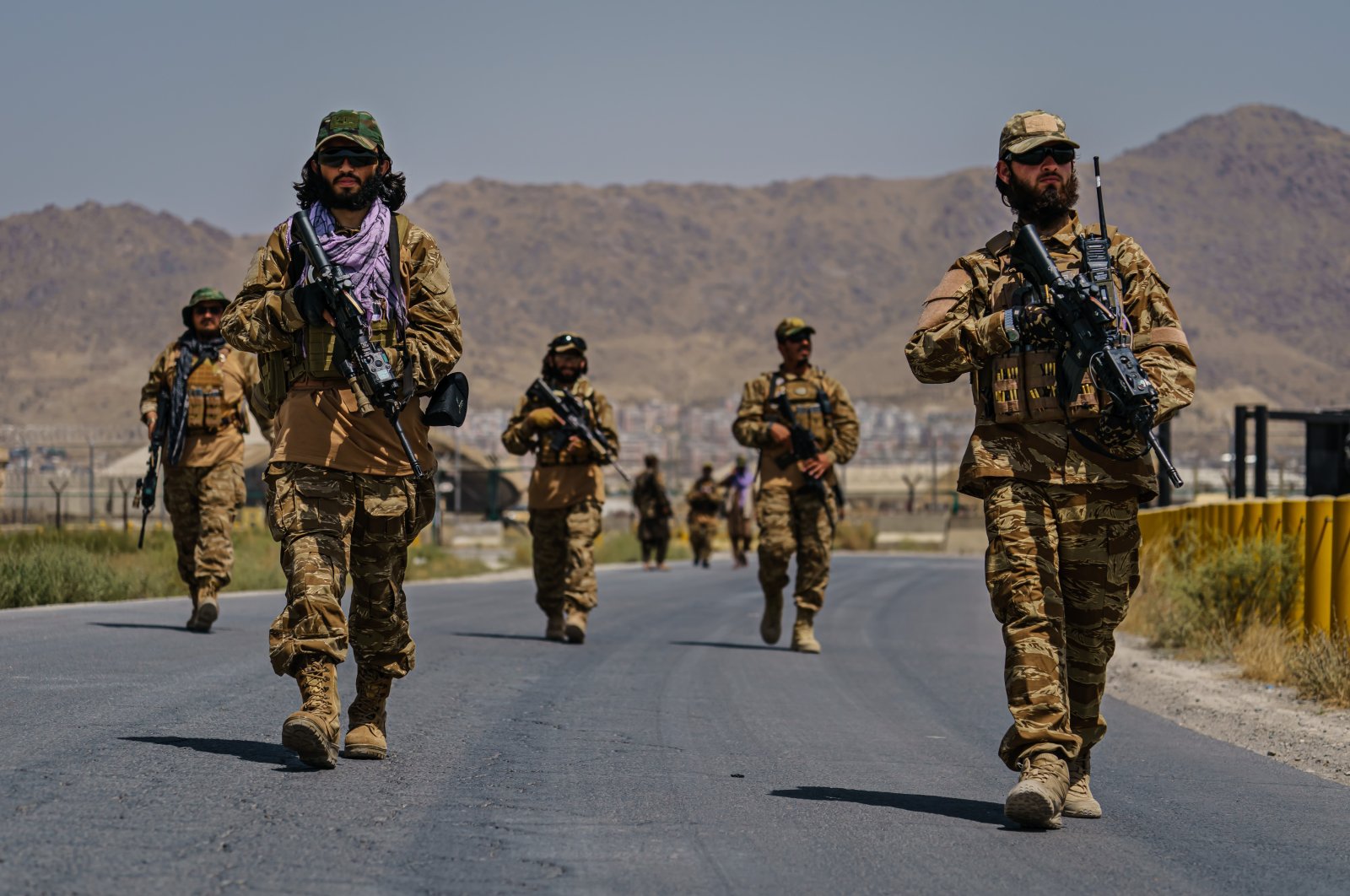 Taliban members secure the outer perimeter, alongside the U.S.-controlled side of of the Hamid Karzai International Airport in Kabul, Afghanistan, Aug. 29, 2021. (Photo by Getty Images)
by Büşra Göktaş Nov 16, 2021 12:05 am

As the U.S. completes its withdrawal, the 20-year war comes to an end, and the long-standing battle between American exceptionalism and Pashtun theocracy gives place to diplomacy

The U.S.-backed Afghan government and the Taliban both appear on the world stage, each aiming to seize control of the country. Following the fall of Kabul on Aug. 15, 2021, the Republic lost control of the majority of the country to the Taliban, and Ashraf Ghani, the last president of the U.S.-backed Afghan government, fled to the United Arab Emirates (UAE) seeking political asylum. As a result, the Republic was overthrown and the country is now ruled by the Taliban’s Islamic Emirate of Afghanistan.

However, the Taliban are the de facto ruling government, and no country or organization has granted them de jure or formal recognition. Is it necessary to obtain state recognition in international law? And what stage is the Taliban at in terms of recognition?

Territory, population, government and capacity to enter into relations with the other states are constitutive elements of statehood, as codified in the Montevideo Convention on the Rights and Duties of States of 1933. It is a legal requirement that the population residing in the territory be socially structured, governed and represented by authorities in order for the government to be functional and independent enough to engage in international legal relations.

Notably, if one of the constitutive elements is missing, the state does not immediately vanish; instead it survives. For instance, with the fall of the Third Reich, Germany was left without any central government, yet the state did not cease to exist. Thus, the government’s instability does not detract from the fact that Afghanistan is a state and an identified independent persona under international law.

Given that Afghanistan is already a state, what does state recognition signify? The Taliban are attempting to solidify statehood through diplomatic means, claiming that Afghans living in the Taliban's territory are citizens of the country and that the Taliban have the ability to engage in international relations.

State recognition has no explicit legal consequences, as it is a political rather than a legal act. However, such an act has significant weight in international affairs and is never taken lightly. Therefore, it is difficult to confer state recognition. In general, recognition entails some constitutive effect, but recognition is not constitutive of the state. It is a sort of chicken and egg situation.

While some states may recognize the Taliban, other states do not. At the end of the day, you may wonder what that entity is, whether it is a state or not. It depends on whether or not the Taliban achieve political legitimacy. Simply put, state recognition is a puzzling matter positioning a state as a legal entity, and the Taliban are attempting to unravel the puzzle.

The Taliban have been engaged in diplomacy for a long period of time. Since the early 2010s, senior Taliban leaders have been stationed in Qatar's capital Doha for the purpose of political reconciliation with various states. Although the Taliban’s political office was initially unofficially established, the Qatari government accommodated the Taliban leaders to create a venue for peace negotiations and many meetings were set with other states in Doha. In 2013, the Taliban flag was raised above the "office of the Islamic Emirate of Afghanistan," but Hamid Karzai, Afghanistan's then-president, refused to accept it, and the flag was lowered.

The Doha agreement, signed between the U.S. and the Taliban on Feb. 29, 2020, was one of the most significant steps for Afghanistan. It is also known as the "Agreement for Bringing Peace to Afghanistan," as it aimed to bring an end to the Afghanistan war. The Taliban were referred in this agreement as "the Islamic Emirate of Afghanistan, which is not recognized as a state by the U.S. and is referred to as the Taliban."

The U.S. explicitly does not recognize the Taliban, but it is unclear how long the non-recognition will last. After the Taliban took over Afghanistan, the first face-to-face meeting between the U.S. and the Taliban took place in Doha on Oct. 9-10, 2021. The two-day discussions focused on security and terrorism concerns, women's rights and evacuations. Ned Price, spokesperson for the U.S. State Department, evaluated the discussions as "candid and professional."

On Oct. 20, Russia hosted a high-level Taliban team for negotiations in which representatives from China, Pakistan, India, Iran and Central Asian states Kazakhstan, Kyrgyzstan, Tajikistan, Turkmenistan and Uzbekistan participated. Russian President Vladimir Putin said Moscow was contemplating removing the Taliban from its list of extremist organizations as part of its outreach to Kabul's new government.

“We note their efforts to stabilize the military and political situation and set up work of the state apparatus,” Russian Foreign Minister Sergei Lavrov said, adding that the Taliban are "a new administration in power now." At this conference, the Taliban was recognized as "efforts" and "new reality" of their ascent to power despite the fact that the Taliban's "Islamic Emirate" has yet to receive official recognition.

A delegation led by the Taliban’s Foreign Minister Amir Khan Muttaqi met the officials of other states. The delegation visited Turkey on Oct. 14.

The delegation also started its three-day visit to Pakistan on Nov. 11, holding talks on several issues, including trade and border crossings. Turkey's Foreign Minister Mevlüt Çavuşoğlu said that recognizing the Taliban and engaging with them are two different things. The main issue is the necessity for an inclusive government in Afghanistan.

State recognition is both significant and insignificant in influencing political outcomes because states are free to choose any form of government they wish under traditional international law, such as republic, emirate, monarchy, federal state, military dictatorship or liberal democracy. As can be seen, the Taliban enter into relations with the other states despite of all the concerns about democracy, women's rights and security.

Beyond international law, diplomacy leads to some rather surreal situations. Palestine and Israel are two examples that come to mind. The United Nations established new status for Palestine as a non-member state of the U.N. to participate as a permanent observer of the U.N. General Assembly (UNGA) on Nov. 29, 2012. Otherwise, Israel is not de jure recognized as a state by some countries such as Libya, Lebanon and Malaysia. Yet, fact is fact. Israel and Palestine are states that have territory, population and governments with diplomatic relations with other states. The disputed region does not change the fact that being a state is about controlling a certain territory.

Even if the Taliban are not recognized by any state, their future as a state is dependent on their diplomacy and control of Afghanistan. Time will only tell whether the Taliban can gain recognition by attempting to portray a new image of the Taliban to the world that is safe and stable and respects women's rights.