Is Kashmir becoming a new combat-zone of global powers? 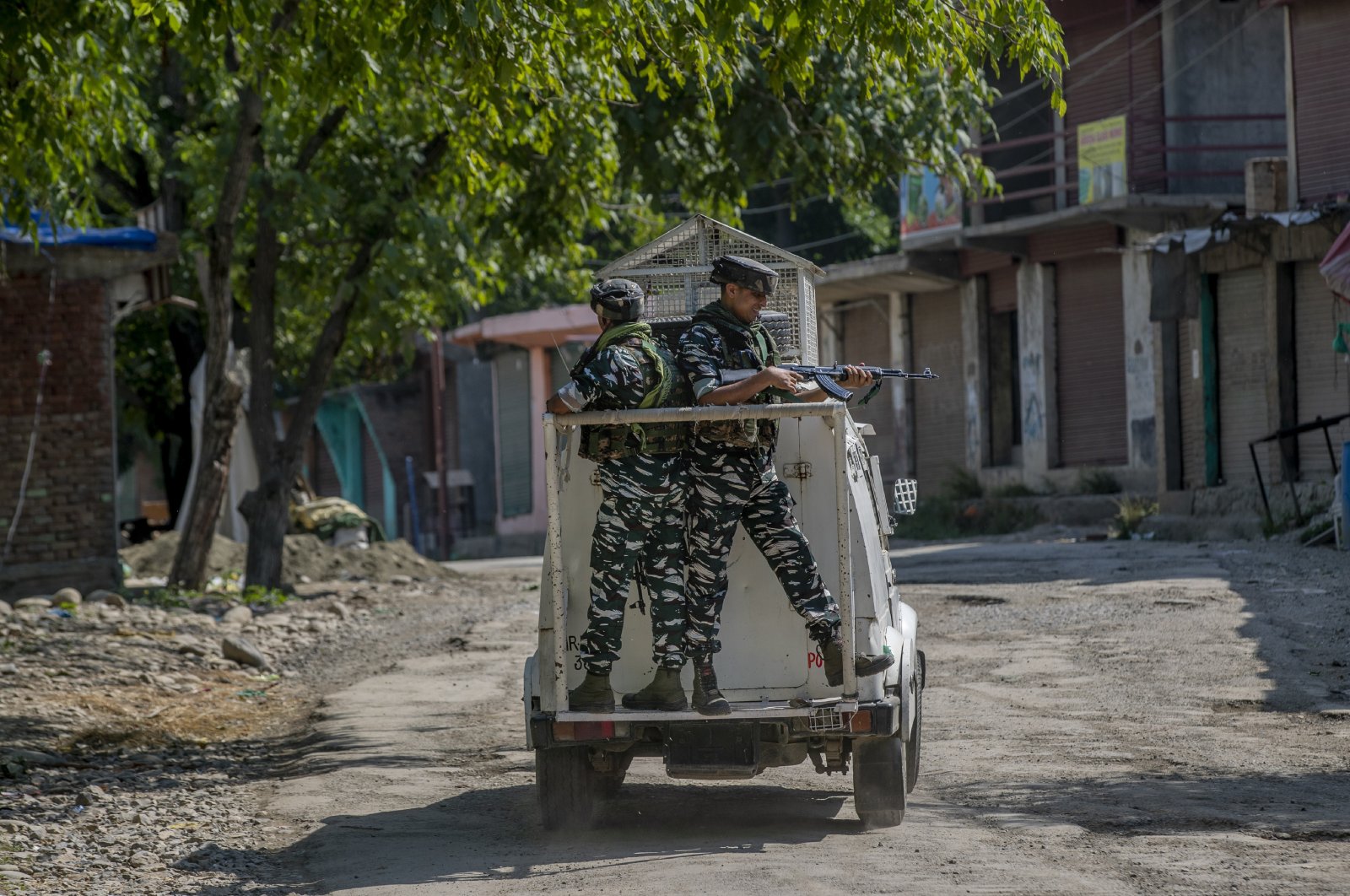 Indian paramilitary soldiers stand guard on an armored vehicle as they move toward the site of a gunfight in Pulwama, south of Srinagar, Indian-controlled Kashmir, July 2, 2021. (AP Photo)
by Irfan Raja Jul 09, 2021 12:05 am

Kashmir has long been a chessboard for countries wishing to make geopolitical moves to show their position to the world. Kashmir, a paradise on earth, now needs peace and tranquility, not war

As the deadline for the withdrawal of American forces from Afghanistan looms, there is news of reshuffling of some U.S. military bases in the Middle East, speeding up the American administration's efforts to repair its democratic values at home, and abroad.

For years, the U.S. has been exporting its own style of democracy around the world and unfortunately, that has lost its real meaning at home. Henry Farrell writes both U.S. President Joe Biden and U.K. Prime Minister Boris Johnson “agreed to protect democracy and open societies” and that is “All about shoring up democracy.” So, “it is time to rebuild America.”

Most importantly, Biden is on a mission to repair and restore the American image at home and abroad by rebranding and turning an old “human rights” slogan into an ultramodern motto, so it appeals to the world.

To be fair, Europe does deserve some credit over its domestic human rights and liberty records in comparison to China that restricts the media and believes in one-party politics.

In recent months, the Western media's focus has shifted to the human rights violations by China against the Uyghur Muslims. Indeed, the new cold war with China may not be a head-to-head bout in the South China Sea, but it can be a fight through the successful use of the “human rights” hymn.

To encircle China by using the human rights armor would be a perfect weapon that would work equally well to gain public support in Muslim countries where present ruling elites are silent over the alleged ill-treatment of Uyghur Muslims.

This means starting a new proxy war in the heart of China. Will China be silent over it? Or will it support separatist movements in India including Kashmir?

Kashmir has become a chessboard for global powers. Although their next moves aren't apparent yet, one can still guess that Kashmir is going to become a new battleground in the coming months and years.

So far, some selected Kashmiri leaders are once again in the good books of Delhi for a possible dialogue over Kashmir but opposing voices have been side-lined as usual.

Verma branded Modi’s government revocation of Article 370 and Article 35A as a “masterstroke” aimed for two strategic reasons: First, “With Kashmir’s special status gone, people from anywhere in India can now buy the property and permanently settle in the state” and second, “The ball was set rolling for the return of Kashmiri Pandits.”

Verma’s article discloses that Modi will offer (select political groups) a mega-development package including a hydro energy generation by 2024.

For some, it may sound like a strategic plan but in reality, it’s yet another package of false hopes and a chain of broken promises made to Kashmiris. Before, Modi, India's former Prime Minister Jawaharlal “Nehru never kept his promise on Kashmir.”

Referring to political circles, Kashmiri journalist Naseer Ganai believes India is under growing international pressure, particularly from the U.S., to hold dialogue with political parties in an attempt to make grounds for “restoration of electoral democracy.”

Modi’s talks with an alliance of eight secular political parties – Peoples Alliance for Gupkar Declaration – in Delhi while ignoring the mainstream Kashmiri politicians have raised concerns and suspicions about Delhi’s intentions for Kashmir.

Pakistani political analyst Shahid Masood raised alarms over Modi’s intentions as he chose to speak to a few political groups while intentionally ignoring the mainstream political entities including Syed Ali Shah Gilani, Yasin Malik, Shabir Shah and Mirwaiz Umar Farooq. Besides, the All Parties Hurriyat Conference (Tehreek-e-Hurriyat), an alliance comprising 26 political, social and religious bodies formed as a political front to further the cause of Kashmiri separatism, was also ignored.

Masood believes Modi wants to discredit some of the leading Kashmiri politicians and perhaps tries to create an internal rift and fight amongst Kashmiris leadership. So maybe India is testing an old colonial-style “Divide and Rule” strategy in Kashmir.

The question is who represents Kashmiris? Those planted and supported by Delhi that has enjoyed fruits of power for decades? Or those leaders that have been tortured, imprisoned and murdered for speaking up for Kashmiris?

The Modi junta wants to present Hurriyat leaders as "separatists" and "extremists," and thus outliers to the world as they do not represent the Kashmiris who are peaceful citizens.

What could possibly happen?

At this moment, several bloggers, YouTubers, TV anchors and opinion writers are offering a wide range of views on Modi’s government's next move in Kashmir. The result is a cluster of rumors, predictions, and stories.

Will there be any change in the Modi government's attitude toward Kashmir? Is Modi going to reverse Articles 370 and 35A?

Everyone is analyzing and predicting the next moves of the Indian government. An unusual troop build-up along the line of control (LOC), or an accelerated move to grant separate statehood to Jammu?

A YouTuber, Sanjay Dixit foretells “Something cooking between Gupkar Mafia and Central Government.” As long as the strings of the government are in the hands of the ruling Hindu Nationalist Bharatiya Janata Party (BJP), anything can happen. Some commentators warn of the mishaps, for instance, David Devadas presumes “some leading figures among the new crop of political activists” could be “terrorists” targets.

Evidently, many governments use “good terrorists” to blame, portray and present opposing groups and individuals as “bad guys” and “threats” to society.

A research paper by the Indian public research university TISS, titled: “Engendering Conflict: Understanding the impact of Militarization, Conflict and Pandemic-Induced Lockdown on Domestic Violence in India Occupied Kashmir” has recently revealed a shocking role of the Indian army in engineering domestic violence to propagate it. “As a serious gender based concern in the valley will contribute to the larger Indian state rhetoric of vilifying Kashmiris men which will then validate the Indian state’s imperialist intentions on the pretext of 'protecting' and 'rescuing' Kashmiri women,” the research paper said.

Another Indian plan relates to a strategically and naturally rich region in minerals, the Gilgit-Baltistan and Ladakh that are long on the imperialist's list. A book by John Keay (1994) “The Gilgit Game: The Explorers of the Western Himalayas 1865-95,” best explains present-day political moves by international powers engaging in a new cold war in the heart of the Ladakh region that could easily sabotage the China–Pakistan Economic Corridor (CPEK) project.

Sudheendra Kulkarni warns “Any attempt by the Modi government to forcibly wrest Gilgit-Baltistan (which has been under Pakistan’s control since 1947-48) would trigger a catastrophic and unwinnable two-front war with both Pakistan and China.”

Time is flying by, snow will disappear on the Himalayan Mountains, and blossoms will welcome the fresh air and sing Imran Pratapgarhi’s poem, “Han main Kashmir hoon” meaning “Yes, I am Kashmir.”

Kashmir is a paradise on earth so let’s make it a place of peace and harmony. Say no to proxies in Kashmir. Please don’t bomb it, love it, live it.