Is the Israeli occupation in Palestine forever? 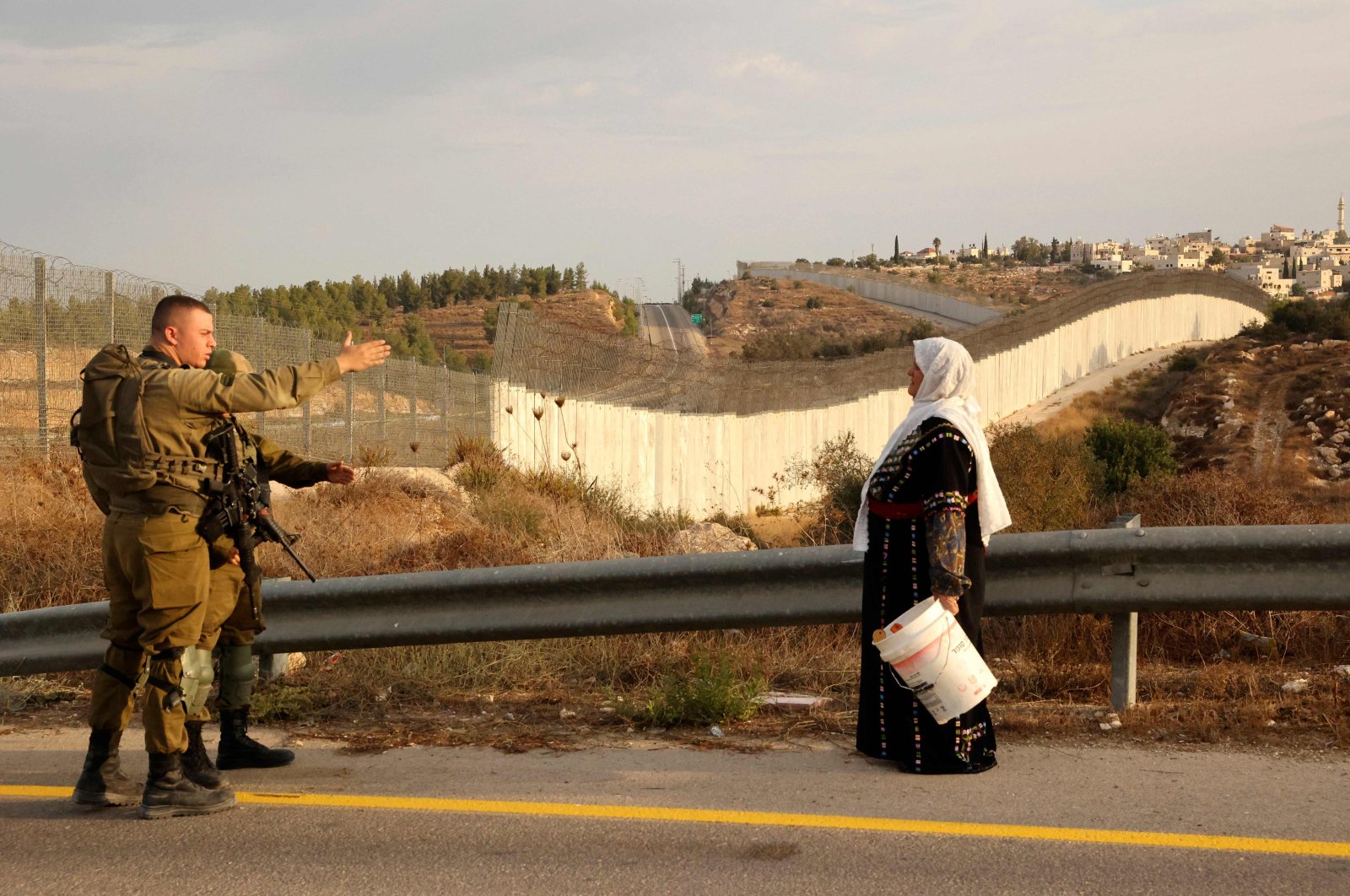 A Palestinian woman stands with others (not pictured) as they gather near an Israeli army checkpoint and wait to reach their olive fields on the other side of Israel's separation barrier (background), near the village of Bait A'wa on the outskirts of the West Bank city of Hebron, occupied Palestine, Oct. 13, 2021. (AFP Photo)
by Najla M. Shahwan
Oct 15, 2021 12:05 am

A global mobilization is still lacking to end Israel's wrongdoings, and it naturally brings up the question of whether Palestinians will ever be able to exit the bloody conflict

Decade after decade, there has been an endless longing to end the Palestinian-Israeli conflict. The dreadful feeling of "no exit" that Palestinians have felt since the start of the conflict is today more than ever raising the question of whether the current situation of the Palestinians will continue as it is for another decade – or even forever. Will the creation of a Palestinian state remain the legacy of another era?

According to a new report by the London-based relief and development agency Christian Aid, there are deep inequalities that divide Palestinians and Israelis across Israel and the occupied Palestinian territory and threaten a further escalation of violence and loss of life if left unaddressed.

The report's author, William Bell, Christian Aid's head of Middle East policy and advocacy, said: "Palestinians face an even more grim future than many currently experience if governments and those with influence do not act now and embrace justice and accountability as an essential precursor to lasting peace. Without justice and equality there will be no Palestine and without Palestine neither Palestinians nor Israelis can enjoy the security, dignity and prosperity that all need to thrive and survive."

The report called "Where is Palestine? A story of loss, inequality and failure" shows how there has been no peace since the first Oslo Accord, while the daily life of Palestinians has continued to worsen.

Israel continues to impose institutionalized discrimination against Palestinians living under its rule in occupied East Jerusalem, the West Bank and Gaza. It continues to restrict the freedom of movement of Palestinians through checkpoints and roadblocks, arbitrarily detain thousands of Palestinians, and hold hundreds in administrative detention without charge or trial. Torture and other ill-treatment of detainees, including children, have been committed with impunity. The Israeli forces continue to use excessive force during law enforcement activities in Jerusalem and the occupied territories.

According to reports, between January 2008 and July 2021, some 5,951 Palestinians, including 1,340 children, were killed. Israel displaced hundreds of Palestinians as a result of home demolitions and imposition of other coercive measures. Despite the COVID-19 pandemic, more Palestinian property in the West Bank and East Jerusalem was demolished in the first 10 months of 2020. In this period alone, some 798 Palestinian families lost their homes, while some 301 Palestinian nonresidential structures were destroyed, including critical facilities such as water cisterns and electricity.

Israel maintained its illegal blockade on the Gaza Strip, subjecting its residents to collective punishment and deepening the humanitarian crisis there.

Currently, 80% of the Gaza population is aid-dependent and almost half the population is unemployed. It can be said that, since 2007, they've been living in the largest prison in the world due to Israeli blockade, lacking key hospital equipment and facing travel bans. The lives of residents there are simply intolerable. Meanwhile, in Gaza, the pandemic worsened the situation as there is a lack of public health care infrastructure.

Besides, the Israeli government expands, assists and protects the illegal settlements in East Jerusalem and the West Bank. It uses them as a tool to further fanaticism. Peace Now, an Israeli nongovernmental organization (NGO) with the aim of promoting a two-state solution to the Israeli-Palestinian conflict, said that Israel approved some 4,948 settlement units in a couple of dozen plans in October 2020. That makes 2020 the highest year on record with12,159 units approved in settlement plans since Peace Now began keeping records in 2012.

According to the United Nations Conference on Trade and Development's (UNCTAD) latest report, the environmental impact of settlements is serious as the occupying power transfers large quantities of hazardous materials and e-waste every year for processing in the West Bank, where its own regulations and monitoring are less stringent than those applied within its borders. The pollution from the informal e-waste sector and unregulated industries are already affecting health, particularly that of children. The Israeli occupation further undermined the environment by destroying millions of olive and other trees to make room for settlement growth.

On the other hand, the crippled Palestinian economy is having a devastating impact on unemployment, manufacturing, agriculture, large-scale revenue, humanitarian conditions and socioeconomic indicators – all these issues and more are linked explicitly and repeatedly to the political situation.

Former U.S. President Donald Trump's "peace plan" revealed in 2019 was rejected by Palestinians as it envisions permanent Israeli domination over large swaths of the West Bank, formal annexation of settlements, the Jordan Valley and other parts of Area C, full Israeli sovereignty over Jerusalem and Israeli control over vital resources and border security. Besides, the plan also means rejecting the Palestinians' right to return to their homelands. In a nutshell, the plan is just a mere continuation of the status quo with Palestinians being forced to accept being overpowered.

In response to the U.S. plan, the 27 European Union member states, including Germany and France, called for ensuring equal rights for Palestinians and Israelis.

Throughout the time, the two-state solution proposals have constantly become a virtual dogma or an empty promise as it always failed to materialize due to Tel Aviv's desire for territorial maximization and Jewish demographic supremacy, opposing the existence of a Palestinian state.

What is the status quo?

Gaza remains under siege amid increasingly devastating conditions. East Jerusalem and the West Bank continue to be occupied and colonized, while Palestinians continue to be dispossessed and subjected to apartheid. The Israeli government would like to paint an overly simplified picture for the world. Reports confirm that the situation has steadily deteriorated over the past years and the initiatives that once might have been capable of stabilizing the situation have become increasingly detached from the realities on the ground.

The latest round of fighting between Israel and the Palestinians last May is a tragic reminder of how deep the gap remains between each side in finding a path to some stable form of peace.

Last month, in a virtual address to the United Nations General Assembly (UNGA), frustrated Palestinian President Mahmoud Abbas, who has long been committed to a two-state solution, gave Israel an ultimatum of one year to end its occupation of territories. He called on U.N. Secretary-General Antonio Guterres to "convene an international peace conference" for the conflict. Israeli Prime Minister Naftali Bennett ignored the Palestinian issue at the U.N. gathering and made no mention of Israel’s decadeslong conflict with the Palestinians.

The U.S. and the international community must promptly engage in a thorough, serious and firm approach to this conflict for a sustained political and just initiative that gives Palestinians their human rights according to international laws, ends the occupation and stops further escalation. The world must take action now.