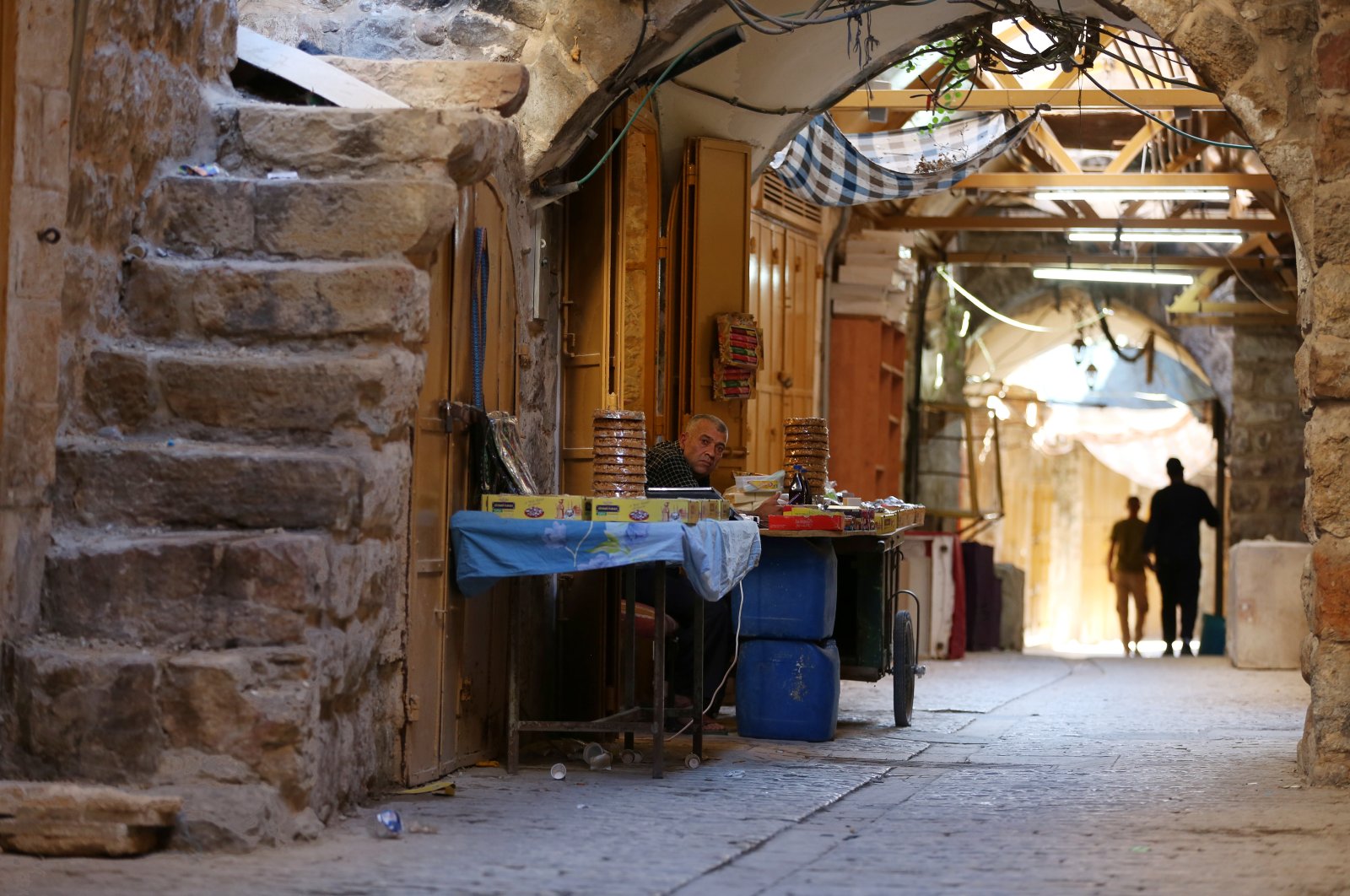 Suffering is deepening in Palestine as its economy continues to deteriorate, poverty levels rise, unemployment increases and the environmental toll of occupation rises rapidly

Suffering is deepening in Palestine as its economy continues to deteriorate, poverty levels rise, unemployment increases and the environmental toll of occupation rises rapidly.

For months, the PA government has been struggling to meet its obligations to contractors and is facing continuous difficulty in paying its employees and workers while rumors spread every month that wages might be delayed.

Although the private sector had become the main lender to the PA, today there is simply no more cash as the banks have reached their limits.

Last month PA Finance Minister Shukri Bishara said during a virtual meeting with international donors that government borrowing from banks “is no longer an option due to the limited liquidity conditions of the Palestinian banking sector.”

Bishara also warned “of a bleak future if finances with Israel are not set straight.” He called on the international community to assist the PA in settling their outstanding financial files with Israel. This would save it over $500 million annually, and help it avoid a financial collapse in light of the decline in international grants and the Palestinian economy reaching the limit in generating domestic revenues.

Among these files is the exemption from the accumulated fee for departing travelers that have accumulated since 2008, as Israel is currently withholding about 740 million shekels ($225 million).

Also, reducing the commission that Israel collects in return for collecting the Palestinian clearance funds from 3% to 1%, and more transparency in Israeli deductions for services (water, electricity, sanitation, and health) is in order.

Bishara added that the total amount of these deductions in 14 years amounted to $10 billion.

The Palestinians also called on Israel to release the deductions that have been withheld unilaterally from the clearing proceeds since 2019, an accumulated amount of 810 million shekels ($247 million) of money the PA had allocated to the families of individuals killed in combat, prisoners and the wounded.

Among the pending files are also taxes and fees on fuel purchases from Israel, as the PA demands tax exemption from the Israeli fuel-providing company that amounts to about 40% of the monthly clearance revenues of the PA.

Bishara said that not paying this percentage would allow PA to save up to $82 million per month in cash flow.

Bishara warned of a rise in the government's financial difficulties after a series of crises over the past three years at a time when donor aid is close to zero.

Bishara considered that all the government's financial reform initiatives, despite their importance, "will not help in addressing or reversing the structural obstacles that are a direct and absolute result of 55 years of continuous military occupation."

He added, "There is a limit to what we can do in terms of rationalizing spending, and this is given the fact that we only have pro forma operational control over 20% of the occupied Palestinian territory while bearing the associated expenditures for 80% of what is left of it."

In this context, Bishara said that the government's spending on the Gaza Strip is 35% of the total general spending, without any revenue generation.

The government bears significant costs incurred in East Jerusalem, especially with regard to the Arab medical facilities as most of them deal with referrals of Gaza patients. They also have to provide support to the Jerusalem Electricity Company, which constitutes about 4% of the operating budget, without recovering the costs.

The government's debt to banks currently stands at about $2.3 billion, up from $1.4 billion in 2019, according to the finance minister.

The blockade, three wars in the last 12 years and divisions have crippled the local economy in Gaza. Due to the violence last May, hundreds of Palestinians have died, including children. Over 100,000 have fled their homes across Gaza.

Over 80% of the population is aid-dependent. Gazans are trapped in a cycle of poverty, unemployment and food insecurity. They have limited access to basic services such as safe water, electricity and medical care and few educational or economic opportunities. Continued coronavirus restrictions and lockdowns have further worsened people’s living conditions and eroded their purchasing power.

Gaza is increasingly becoming unlivable under the severe and worsening socioeconomic conditions. In the West Bank, 900,000 Palestinians in East Jerusalem, H2 sector, and Area C (an area controlled by Israel that extends to over 60% of the West Bank) have limited access to water, health care, education and other basic services.

Because of violence, intimidation and the non-granting of building permits, the population is increasingly subjected to forced evictions and seeing their homes and infrastructures demolished. These demolitions have intensified despite the COVID-19 pandemic. As a result, Palestinians are separated from their land and families as well as from schools, hospitals, workplaces, and places of worship.

The short-term economic prospects are even grimmer and there are no signs that the negative trends in the key drivers of economic growth will reverse anytime soon.

The critical facts behind the near-collapse of the Palestinian economy are the rapid expansion and tightening grip of occupation, suffocation of Gaza’s local economy, drop-in donor support, deterioration of the security situation and lack of confidence as a result of bleak political horizons.

Even though all sectors of the economy are constrained by occupation, agriculture and manufacturing are disproportionately impacted and the ensuing massive trade deficit adversely affects economic growth.

The viability and competitiveness of Palestinian producers are undermined by Israel's multi-layered system of physical and administrative restrictions.

In the West Bank alone, around 705 permanent physical obstacles restrict the movement of Palestinian workers and goods which include checkpoints, gates, roadblocks and trenches.

In addition, the economy is further weakened by the Israeli ban on the importation of a long list of “dual-use” essential technological and intermediate goods as well as other critical production inputs (“dual-use” goods are products deemed to have potential military applications by Israel).

On the other hand, occupation isolates the Palestinians from international markets and thus compels them into overwhelming trade and economic dependence on Israel, which accounts for 80% of Palestinian exports and supplies 58% of its imports.

The small Palestinian market ranks fourth among Israel’s top export markets, just behind the United States, China and the United Kingdom – but ahead of trading giants such as France, Germany and India. The resulting trade deficit with Israel cannot be covered by the value of all Palestinian exports.

Occupation has prevented the Palestinian people from developing their oil and natural gas resources in Gaza and the West Bank.

Consequently, the estimated accumulated losses are worth billions of dollars and the associated opportunity cost of forgone development is staggering. The longer this situation persists, the higher this cost will be, and the total economic cost of occupation borne by the Palestinian people will continue to rise.

The current PA financial crisis was predicted years ago and periodic reports by the World Bank and the International Monetary Fund (IMF) on the Palestinian economy have been warning of harsh fiscal times unless urgent easing measures are taken.

Their recommendations have included calls for the PA to continue its fiscal consolidation measures to reduce its deficit, for the international community to increase budgetary support for the PA and for Israel to ease its restrictive policies and measures that have been suffocating the Palestinian economy.

The gravity of the current PA financial crisis is such that it is compounded only by few options to manage it – if it can be managed at all .

Crisis then and now

In the past, when faced with financial crises, the PA appealed to donors and to Arab states for more budgetary aid, implemented austerity measures, and increased domestic borrowing but today the PA has very limited room for action in all the past fronts.

Donors’ direct budget support to PA has declined over the past years by a hefty 58%, the record of Arab financial assistance to the PA in the past few years has largely been disappointing and the PA’s ability to pursue stringent financial measures has already reached its safe limits.

Besides, domestic borrowing is no longer a viable option.

With all options effectively exhausted, it is not clear how the PA will handle its way out of the current crisis as the PA’s financial troubles are deeply rooted in an extremely complex political setting. Since its establishment 27 years ago, it has been operating under a military occupation that is in total control of all aspects of the Palestinian economy.

The continued occupation conditions, heightened political instability, and the occasional renewed episodes of violence have added a high degree of unpredictability and risk to this already volatile context. This discourages the Palestinian private sector from playing its vital role as an engine of economic growth.

These factors have produced a weak economy that is increasingly unable to generate enough resources to finance its national budget and made it chronically dependent on international aid for financial survival.

Unless and until this context completely changes, troubles will continue to mount, edging the PA ever closer to the brink of financial collapse, with unexpected consequences.