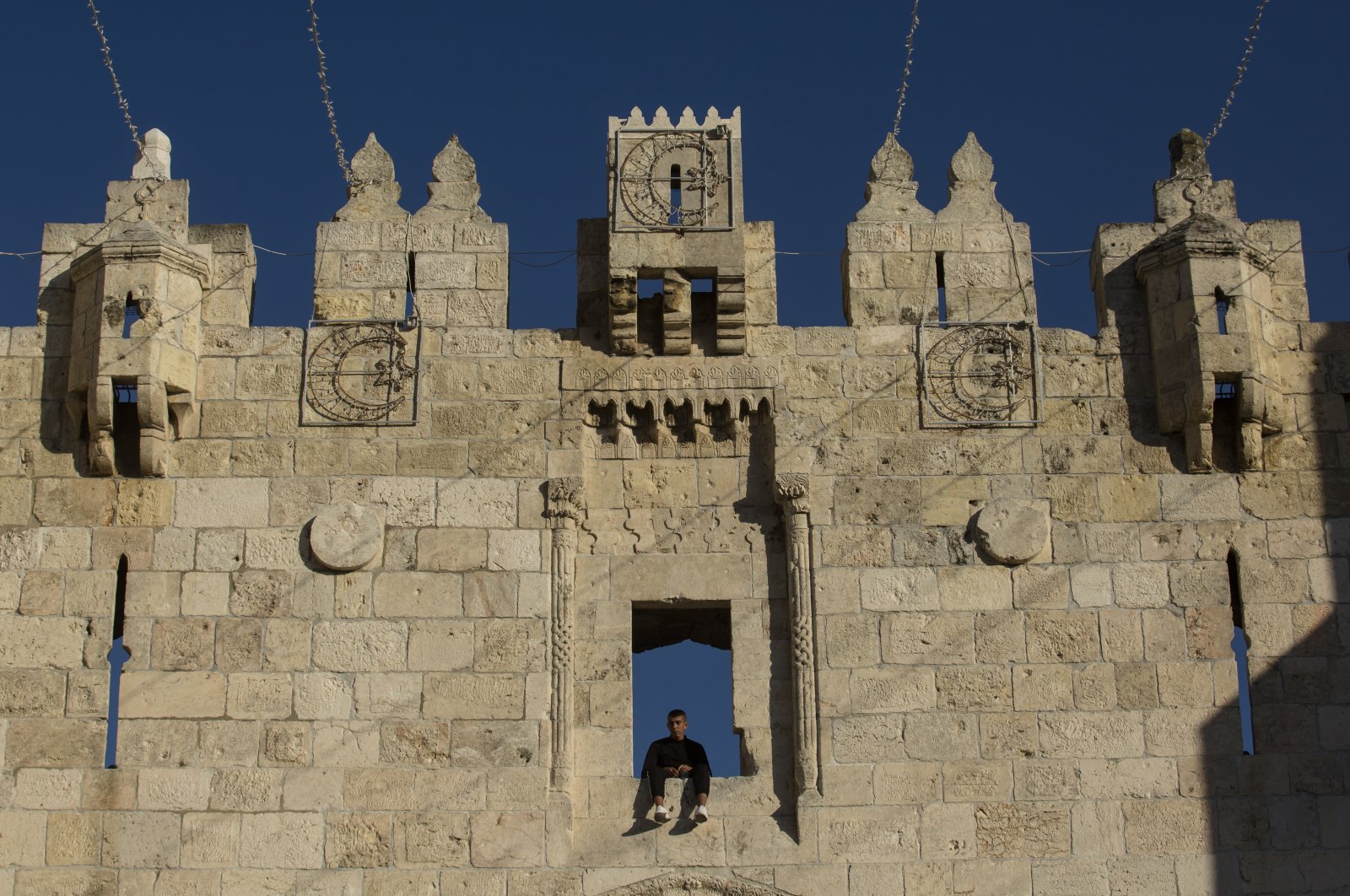 A Muslim man sits on Damascus Gate ahead of the first evening of the holy Muslim month of Ramadan, Old City, Israeli-occupied East Jerusalem, April 12, 2021. (Photo by Getty Images)
by Najla M. Shahwan Apr 14, 2021 12:05 am

In East Jerusalem's Sheikh Jarrah, Tel Aviv furthers its decadeslong mistreatment of Palestinians. Even worse, it does it regardless of what the international law says

Over the past years, Israel has demolished tens of thousands of Palestinian properties and displaced large swathes of the population to build homes and infrastructure to illegally settle its own population in the occupied East Jerusalem, violating international humanitarian law and causing a war crime.

Owing to its strategic location, the Israeli extremist settler groups, backed by the Israeli government and the Israeli Jerusalem Municipality, continue to overtake Palestinian homes and claim the ownership of Palestinian properties under the pretext of pre-1948 "Jewish ownership."

The residents of the Sheikh Jarrah neighborhood have been lately among many Palestinians in the city facing this threat as Israel's goal has been for years to forcibly displace the Palestinians of Jerusalem and clear the way for more illegal Israeli settlements as a part of a broader pattern to change the demography of the city.

Sheikh Jarrah, one of the prominent Palestinian neighborhoods, has historical significance with respect to its national and religious identity for Palestinians and its location – between East and West Jerusalem, at the crossroads linking the Old City to Mount Scopus to the northeast part of the city amid consulates and centers of international organizations.

It is home to around 3,000 Palestinians, all refugees who were ethnically cleansed from their homes in other parts of historical Palestine during "nakba," or “catastrophe,” when hundreds of thousands of Palestinians were forced to flee during the 1948 war over Israel's establishment.

Sheikh Jarrah has preserved a cultural significance throughout history as it is home to the historic Sheikh Jarrah Mosque, the late-19th century St. George’s Cathedral and archaeological sites including the Tomb of Simeon the Just, Dar-el Tefl college, the Palestinian National Theatre (Al-Hakawati), the Orient House, the French and Saint John Hospitals, prominent hotels and several diplomatic missions.

Over the past decades, Sheikh Jarrah has been a victim of Israel's vicious colonial plans that are designed to alter the character and identity of the occupied Palestinian capital – supporting the illegal colonial-settlement of "Ma'alot Dafna,” a new settlement complex on the premises of the historic Shepherd Hotel, a complex for three Israeli hotels (Olive Tree, Grand Court, and Leonardo) and the headquarters of the Israeli settler' organization Amana.

Israeli courts have, over the last few months, upheld eviction orders to force six Palestinian families from the houses where they lived for more than 70 years, in favor of settlers in the Sheikh Jarrah neighborhood.

The eviction orders appear to be strategically focused on an area in East Jerusalem known as the "Historic Basin," aiming at clearing the way for the establishment of more illegal Israeli settlements in this area and physically segregating and fragmenting East Jerusalem from the rest of the West Bank.

More than 70 Palestinian families living in the Karm al-Ja’ouni area of Sheikh Jarah are at present undergoing this legal battle in Israeli courts to confront the threat of forcible transfer that allows settlers to take over their homes.

Four of these families, (Skafi, Al-Jaouni, Al-Kurd and Al-Qasim), comprising 30 people in seven households, have already received eviction orders and have until May 2, 2021, to vacate their homes. Last February, the Israeli District Court rejected the families’ appeal.

The 28 extended Palestinian refugee families, all of whom fled or were forcibly expelled from their homes in 1948 from areas that are now in Israel, were resettled in the area of Sheikh Jarrah by the United Nations in 1956.

Under a housing scheme sponsored by the United Nations Relief and Works Agency for Palestine Refugees in the Near East (UNRWA), the 28 Palestinian refugee families were granted funds to build homes on land given by the Jordanian government, provided they relinquished their right to food assistance from the UNRWA.

According to individual lease agreements between the respective families and the Jordanian authorities, the families were to pay a nominal rent for three years, after which ownership of the land and the properties would be transferred to them.

However, despite assurances to the contrary, the legal titles to the homes were never formally transferred to the families.

Since the start of the Israeli occupation and annexation of East Jerusalem in 1967, which continues to date, the Palestinian refugee families in Sheikh Jarrah have been the target of eviction proceedings brought about by settlers.

The most recent litigation has been initiated by settler organizations seeking to enforce provisions of an Israeli law that allows Israeli Jews to initiate claims in East Jerusalem for properties that may have been owned by Jewish families prior to 1948, while the Israeli law does not allow Palestinians to make similar claims for appropriated family-owned property in Israel before the 1948 war.

The two Israeli organizations that have brought many of the eviction lawsuits, Nahalat Shimon and Ateret Cohanim, function as both land ownership companies and settler associations.

In December 1948, under resolution 194, the United Nations set up the Palestinian Conciliation Commission (PCC), comprised of the United States, France and Turkey, to “take steps to assist the governments and authorities concerned to achieve a final settlement of all questions outstanding between them." Although the PCC did not fulfill its mandate, it produced a valuable property database belonging to Palestinian refugees covering 5.5 million dunums (1,359 acres) of privately owned Palestinian properties that Israel seized.

In 1950, Israel approved the “Absentee Property Law “which became its primary tool to seize Palestinian property. The modus operandi was clear: Palestinians are prevented from returning to their lands and properties, then they are declared absentee, and consequently, the state takes over control.

Irrespective of the commitment to fulfilling the U.N. Charter and implementing its resolutions, upon its U.N. membership in April 1949, Israel has been violating all U.N. resolutions for the past seven decades – including U.N. resolution 273 that explicitly mentions the Israeli "commitment" to implement U.N. Resolution 194.

Within this process, Israeli courts' collaboration has allowed these settler organizations to continue making use of such arguments (also of forged documents) that would be deemed illegal under any fair trial.

The illegal annexation of Jerusalem has facilitated such tactics whereby the Israeli government, municipality, courts and settler organizations have acted as one group targeting the very Palestinian existence in the occupied East Jerusalem.

With the increase in evictions, home demolitions and settlement expansion, the historic Palestinian neighborhood of Sheikh Jarrah is either gradually disappearing or is becoming completely surrounded and isolated by the Israeli settlements.

Sheikh Jarrah is not the only targeted neighborhood in East Jerusalem as the Old City (the Islamic Waqf and Church properties), Silwan and al-Esawiyah are all targets and a part of the occupied Palestine, where Israel’s illegal annexation has been considered null and void by the international community.

Also, Israel as an occupying power has the obligation to act in accordance with the IV Geneva Convention, including stopping the home demolitions and the forced evictions of Palestinians.

The struggle for East Jerusalem and its neighborhoods has been long, bitter and embroiled in unfulfilled promises and illegal dealings, while the international community watches silently.

Failure to protect the Palestinian people under Israel's colonial-settlement occupation, including taking concrete actions to hold Israel accountable, is encouraging such crimes and violations, perpetuating the violation of Palestinian national and human rights and threatening the prospects of a just and lasting peace.