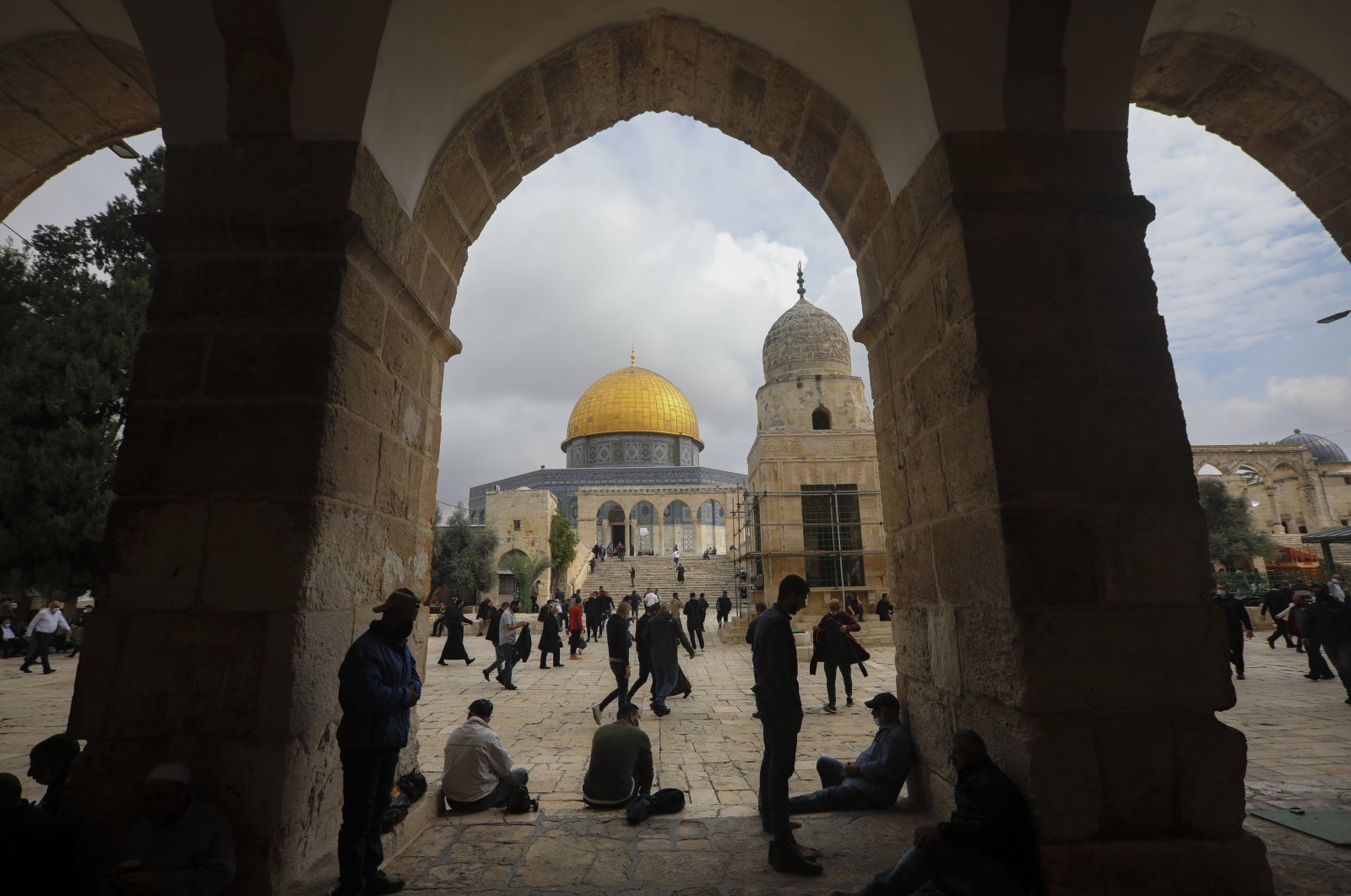 Muslims gather for Friday prayer next to the Dome of the Rock Mosque in the Al-Aqsa Mosque compound in the Old City, Israeli-occupied Jerusalem, Palestine, Nov. 6, 2020. (AP Photo)
by Najla M. Shahwan Mar 02, 2021 12:05 am
RECOMMENDED

The status of Jerusalem is at the heart of the Israeli-Palestinian conflict and it is one of the most contentious areas of the dispute between Israel and the Palestinians.

Israel claims the whole of Jerusalem as its capital while the Palestinian vision is for East Jerusalem, on the basis of 1967 boundaries, to be the recognized capital of their future Palestinian state, fully integrated and part of the Palestinian territory of the West Bank and Gaza Strip (territorially, economically, politically and socially) and independent of Israeli control.

Palestinians also demand freedom of movement between West and East Jerusalem without any blockade.

This vision is diametrically opposed to the matrix of policies implemented by Israel in East Jerusalem since 1967, which has aimed at separating Jerusalem from the West Bank and obstructed the growth and development of the Palestinian population in East Jerusalem.

These policies range from land confiscation, construction of settlements, utilization of zoning and planning laws to limit Palestinian expansion. It is a demographic policy aimed at limiting the numbers of Palestinians able to reside in Jerusalem, prohibiting entry of Palestinians from the West Bank and Gaza to Jerusalem without Israeli-issued permits, which are given only in extremely limited circumstances.

Israel has been establishing "facts on the ground" designed toward a greater Jewish majority in East Jerusalem aiming to create a new reality that makes realizing the two-state solution and Palestine’s sovereignty over the city impossible.

Last February, the Israeli district court in Jerusalem rejected an appeal by four Palestinian families living in the Sheikh Jarrah neighborhood in the occupied East Jerusalem against their eviction from their homes for the benefit of Jewish settlers.

The very settlers claimed that the land, where the houses are located, was owned by Jews prior to the 1948 Arab-Israeli war that ended in Israel occupying most of Palestine and displacing three-quarters of its citizens who became refugees until today.

The court gave the four families until May 2 to implement the eviction decision.

Settler organizations, which claimed ownership of the land where the homes, are located in what is known as the Karm al-Jaouni area in Sheikh Jarrah, have registered it at the Israeli lands department as their own.

The court refused to allow discussion of ownership of the land despite attempts by the Palestinians’ lawyers to prove that the settlers do not own the land on which the housing project was built in 1956 by the Jordanian government and the U.N. Relief and Works Agency for Palestine Refugees (UNRWA) for the Palestinians displaced following the Israeli occupation in 1948.

In a number of separate rulings issued in recent months, Israeli courts ordered the eviction of a large number of Palestinian families from their homes in the Sheikh Jarrah and Silwan neighborhoods and the handover of the properties to Israeli settlers' organizations.

In the last several years, the number of eviction decisions has increased in particular in Sheikh Jarrah and Silwan, where entire communities of around 200 families are at risk.

In Batan al-Hawa alone, 14 families have already lost their homes since 2015 and over 80 other households are facing eviction demands and are at imminent risk of displacement.

Depriving the families of their homes, main assets and source of physical and economic security frequently result in a disruption in livelihoods and increased poverty.

Besides, forced eviction has a grave physical, social, economic and emotional impact on the Palestinian families concerned.

What do Israeli laws say?

The U.N. Office for the Coordination of Humanitarian Affairs (OCHA) recently estimated that over 800 Palestinians are at-risk of forced eviction in East Jerusalem, due to cases brought before Israeli courts, primarily by Israeli settler groups.

This is the result of the application of Israeli legislation in the occupied territories including specific laws that facilitate the takeover of properties for the establishment of Israeli settlements. The Legal and Administrative Matters Law, which was enacted by the Knesset in 1970, was legislated in order to deal with many different issues concerning people and the areas annexed to Jerusalem in 1967, and one of those issues was the status of properties owned by Jews before 1948.

The very law was intended to correct what it considered to be a historical injustice by restoring the property to its original Jewish owners while the law was not applied to Palestinian properties.

According to Peace Now, an examination of the protocols of the legislative process indicates that the legislators viewed a situation in which Jews would be able to return vacant properties, while in cases where the properties were occupied, they would receive financial compensation.

The legislators took into account the personal connection of a person to his property, but in practice, the law is being used by settlers who have nothing to do with the original owners.

In the end, a mechanism was created by the government to exploit the law in order to take control of Palestinian populated areas and to transfer them exclusively to settlers.

The individual right that the law sought to protect was made by the settlers and with the assistance of the Israeli government for the right of one collective (Jewish) at the expense of another collective (Palestinian).

Shortly after capturing East Jerusalem during the six-day Arab-Israeli war in 1967, Israel expanded the municipal boundaries of Jerusalem to take in large areas of land on which it later constructed Jewish settlements while at the same time, it fiercely limited the expansion of Palestinian neighborhoods, forcing many in the increasingly crowded areas to build illegally.

For years, the Silwan neighborhood has been the target of repeated settlement activity by the Israeli government and religious settler organizations which include archaeological digging underneath Palestinian homes to search for the lost biblical "City of David."

These developments are part of wider settlement expansion within Palestinian residential areas in the so-called "Holy Basin" area of East Jerusalem.

In addition to Silwan, this includes the Muslim and Christian quarters of the Old City, Sheikh Jarrah, Al Tur (Mount of Olives), Wadi al-Joz, and Ras al-Amud.

Settlers reside in houses that have been expropriated by means of the Absentee Property Law, on the basis of alleged former Jewish ownership and in residences custom-built and financed by settler organizations.

The impact of settlement activity in Palestinian areas such as Silwan includes restrictions on public space, residential growth and freedom of movement, along with increased friction and violence.

In the most severe cases – Silwan, the Old City and Sheikh Jarrah – settler expropriation has resulted in the loss of property and the eviction of long-term Palestinian residents.

Today, 86% of East Jerusalem is under the direct control of the Israeli authorities and Jewish settlers.

Around 200,000 settlers live in settlements that have been mostly built either entirely or partially on private Palestinian property while 2,000 of them live in the midst of Palestinian neighborhoods under army protection.

Since 1995, the Israel Antiquities Authority has been excavating sites in Silwan with the support of the settler foundation, Ir David, officially in order to create a new tourist attraction and find evidence of the existence of the three-millennia-old "City of David."

The completion of the "City of David" project, including a Roman-style "avenue" built over streets that have been home to generations of Palestinians, would cement the position of the 450 illegal settlers currently living in Silwan and marginalize the 10,000 Palestinian residents of the neighborhood.

The case of demolitions

After seizing the West Bank in 1967, Israel unilaterally annexed 72 square kilometers, including the eastern part of Jerusalem and 28 surrounding West Bank villages, to the Jerusalem municipality. This area, commonly called East Jerusalem, had 66,000 Palestinian residents, 24% of the new municipality’s population.

Israel has since transferred thousands of its own Jewish citizens to East Jerusalem, a war crime under international law while refusing to approve most zoning plans in Palestinian neighborhoods that would allow expansion. Left with no choice but to build and expand their homes without permits, Palestinians live under the threat of home demolitions.

In 2019, Israeli authorities demolished at least 140 Palestinian homes in occupied East Jerusalem, the highest annual number since it began keeping records in 2004, and 238 Palestinians, including 127 minors, have lost their homes to demolitions, according to Israeli rights group B’Tselem. The second-highest number of demolitions on record was in 2016 when 92 homes were demolished, the group stated.

Over the past decade, more than 2,600 people have been rendered homeless after their houses were demolished.

Meanwhile, critics have charged that discriminatory permits by the Israeli government have forced a vast number of Palestinians to build illegally.

According to a report by the OCHA, Israeli authorities have demolished at least 90 homes in East Jerusalem since the beginning of 2020. Accordingly, more than 100 Palestinians were left homeless.

Noting that there is no legal basis for implementing such measures, Palestinians say that it is "part of Israel's policy of intimidation and Judaization of the city.”

The Israeli municipality often collects demolition costs from the people whose homes were destroyed.

The Palestinian inhabitants of occupied East Jerusalem are trapped and strangled, as Israel tries all means to remove them from the holy city where they were born.

Since Israel seized the eastern part of Jerusalem in 1967 and illegally annexed it in 1981, it has intentionally left the status of its Palestinian population living there unresolved by giving “permanent residency,” thus revoking the residency status of around 14,595 Jerusalemites and often compelling their families to join them outside the city borders.

The Israeli government works on imposing a greater Jewish majority in East Jerusalem at a ratio of 70-to-30 to prevent the realization of Palestinian national aspirations in the city.

On the other hand, the "Separation Wall" which Israel started building in 2002, sliced East Jerusalem, divided villages, encircled towns and split families from each other thus cutting around 140,000 Palestinian residents off from the rest of the city.

All these measures were designed to push the Palestinians out of the city, usually to areas outside the wall or to nearby Palestinian cities.

Moreover, Palestinians in Jerusalem are required to pay large sums of taxes, such as the national insurance tax, for services they barely receive, in contravention of international law, which considers East Jerusalem as occupied territory and thus, Israeli law should not be applied to the area.

Despite the clarity of international law, Israel continues its illegal policies of annexation settlement of East Jerusalem and the silent eviction of its Palestinian residents.

Moreover, the Israeli high court continues, illegitimately, to accept jurisdiction over settler claims to Palestinian land in East Jerusalem while the extension of Israeli civil jurisdiction to occupied land is illegal.

The rate of demolition, discrimination and displacement is accelerating systematically putting the holy city and its Palestinian residents in a dangerous situation.

This issue must be placed high on the political agenda of the international community which must exert maximum pressure on Israel to ensure full compliance with international law and stop those developments that alter the status quo of the Holy city and block a future two-state solution between the Israelis and the Palestinians.