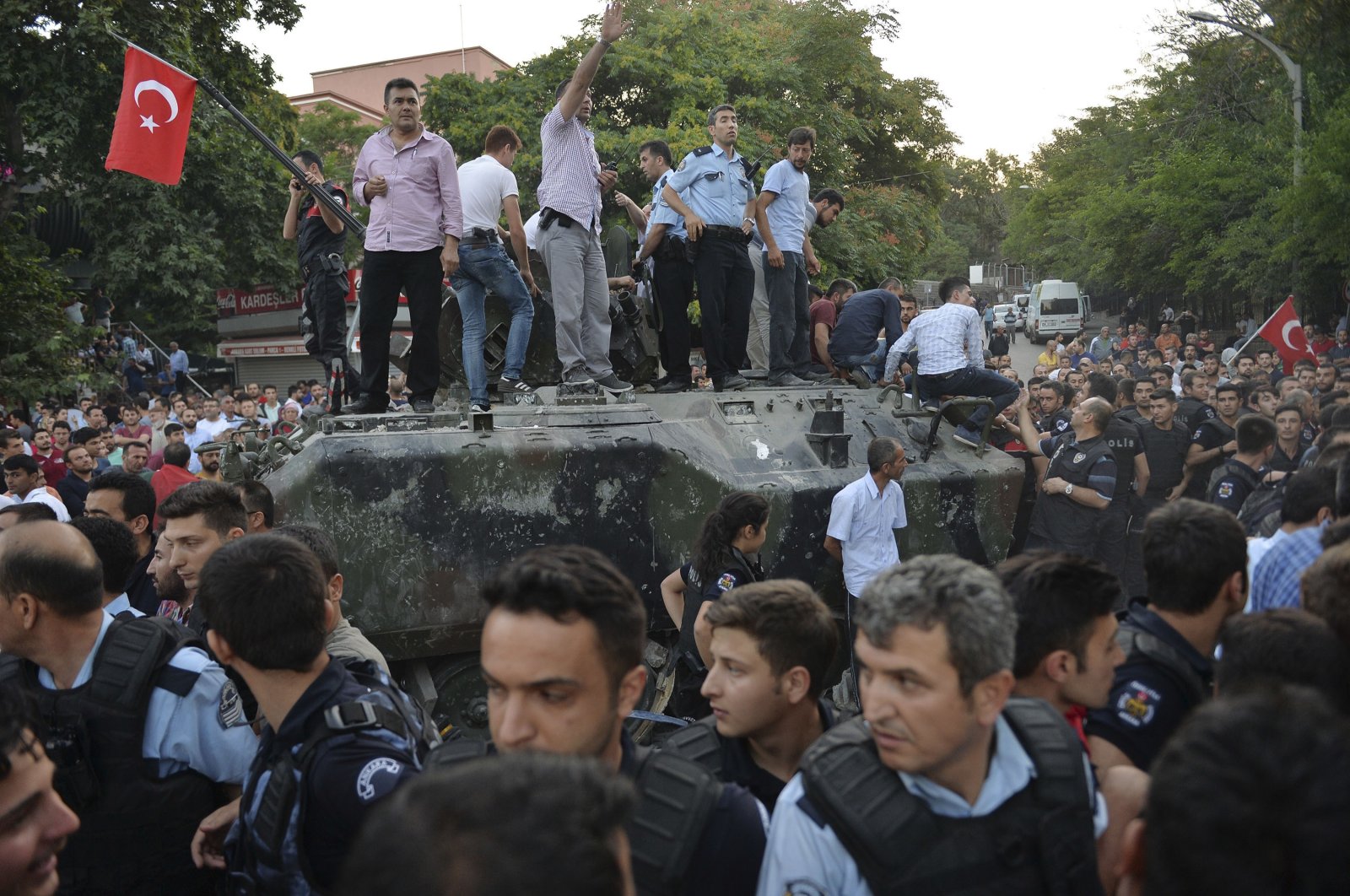 July 15, 2016, is a date that will never be erased from Turkey's collective memory. The day society united for the sake of democracy will be remembered forever

Tanks on the Bosporus Bridge (now the July 15 Martyrs Bridge), fighter jets bombing the Turkish Parliament, public and private institutions under siege and an attempt to either kidnap or murder the president – the night leading from the 15th to the 16th of July 2016 will forever be a part of Turkey’s collective memory.

A small faction of the nation’s military under the command of the Gülenist Terror Group (FETÖ) had staged a heinous coup attempt with the barbaric aim to destroy modern Turkish democracy and install a dictatorship instead. Yet what the terrorists had not anticipated was all of Turkey taking to the streets to defend exactly the former: their cherished way of life, their personal and societal liberties and freedoms – democracy indeed.

Before we approach the issue of explaining to our esteemed international readers why the Turkish people spoke up so vehemently and above all else unanimously against the putschists, let us pause a moment and pay respect to the 251 martyrs who lost their lives during the fateful events and recall the 2,196 injured citizens.

It is impossible to find the correct words when addressing their families’ pain and grief; rest assured your loved ones will always be remembered as heroes as your children and grandchildren will live in peace and harmony.

In order to understand why the Turkish population demonstrated such a determined reaction in 2016, one must look back at the national elections of 2002. In a landslide victory, the Justice and Development Party (AK Party) had won two-thirds of the seats in the assembly. The party and the majority of the electorate united behind now President Recep Tayyip Erdoğan, who became the country’s prime minister.

It was a protest vote of sorts, as citizens had little faith in past governments unable to steer Turkey clear of a massive financial crisis. But solely focusing on the economy would be misleading.

Erdoğan and his party had set out on an impressive path of reform, which over the coming years would reconstruct and modernize each and every aspect of daily life and society as a whole. He became a trusted and admired leader who year after year continued to strengthen Turkey.

Although the AK Party is clearly a proponent of mainstream conservatism, it is not wrong to compare Erdoğan, at least in this context, with former West German Chancellor Willy Brandt, a social democrat, who famously said, "let us dare more democracy." And this is exactly what Erdoğan managed to accomplish: a complete overhaul of the way the country was run.

Compiling a full list of reform projects would present more than enough material to fill a small library. One reflection of these changes is that Turkey became a nation where young people, for the first time in decades, had the opportunity to express themselves. Besides, individualism was no longer considered something negative as long as one's individual actions did not infringe on another's beliefs.

What is more, the government started to privatize many state businesses that had proved unfit for the new millennium. And last but not least, we must not overlook a related development: as the Turkish nation modernized itself at great speed, Erdoğan put an end to what had previously been known as splendid isolation – and Ankara became a highly respected regional (and beyond) political actor.

Few would disagree that when embarking on such a courageous path of reform, wherever in the world, and the numbers of supporters increase, as does resentment in certain (political) circles. This is true for the Gülenist clan, who saw their influence dwindling and probably saw the 2016 coup as their last chance at survival.

Generally speaking, one of the most daring undertakings Erdoğan had proposed was to end the system of military tutelage. Turkey had all too often fallen victim to military intervention in society during its sad history of coups and coup attempts.

The AK Party did not suggest abolishing the armed forces, of course not. It simply suggested updating its command structures to match other European democracies in which a soldier is considered a citizen in uniform, fully connected to what goes on in the society they serve, proudly representing it.

Reforms at home and international recognition abroad paired with a clear commitment to the notion that "the era of coups is over for good" resulted in the steady increase of cross-partisan supporters. Step by step Erdoğan became not just the leader of a particular political party, but the leader of all Turks.

The geopolitical situation and global financial crisis from late in the first decade of the new millennium affected Turkey’s policy-making efforts.

And the more the electorate came to understand that a threat to Turkey constitutes a threat to every Turkish citizen, the more people identified with the current government, and now President Erdoğan.

Think about terrorism, consider the PKK, then add the migrant situation and civil wars along the nation’s southern borders. We have not even yet mentioned the ongoing reluctance in Brussels to finally let Turkey join the European Union.

Another very interesting observation that will set the stage for the third and fourth chapter of this opinion piece is that many who were initially staunch opponents of Erdoğan and his party realized that the modernizing of the nation was more than just party manifesto chatter. It was clear that the process actually benefited all citizens, including their very own families, regardless of political leaning and background.

As President Erdoğan took to FaceTime on his iPhone after managing to make contact with CNN Türk, the first sigh of relief was palpable across the country. Twenty-five minutes had passed since midnight and the killer putschists pressed on with their heinous, monstrous plan.

There had been rumors circulating on social media that the coup plotters had stormed the holiday complex in the coastal resort of Marmaris where Erdoğan had been staying, so when the president addressed his nation everyone somehow knew it would soon be over.

What he asked of his country was no small feat: He called on the people to take to streets amid the bombs and terrorists and occupy town and city squares. He wanted all of Turkey to unite and put an end to this tragic undertaking as swiftly as possible.

And that happened. The Turkish nation fought back the biggest threat to peace, freedom, equality and stability their generation has ever faced, with their bare hands.

The attack on Turkey was not interpreted as an attack on the government of the time or an assault on just one person, Erdoğan. It was immediately viewed as an attempt to destroy modern Turkey in its entirety in one night. The coup plotters had apparently hoped for less solidarity among the people with their nation. Perhaps "just one more coup," no one will be bothered. But bother the nation it did.

Secular and more traditional, blue- and white-collar, politically left, right or somewhere in the middle, young and old, men and women, residents in cities and villages – everyone felt under siege and attack and fought back. People met in town squares and on the streets, standing shoulder to shoulder to end this nightmare, the last coup attempt of all coup attempts.

The coup plotters misjudged how strongly the Turkish people believe that democracy is worth fighting for.

Why does West not appreciate reality?

This article was written with an international audience in mind, who five years ago may or may not have followed the events in detail but relied on overseas media, who for the most part misinterpreted what was going on or in some instances even openly sided with the putschists as if they intended to bring democracy, not erase it.

Hence finger-pointing would be wrong – the aim of this piece is to raise awareness among foreign readers about the why and how, about the buildup to the 2016 coup and the ongoing reform process in its wake.

Just as in all other democracies, one could argue that this way of living together has its flaws from time to time, but for now, it is the best way we've ever known. Democracy is a threat to totalitarianism, a threat to extreme ideologies and, luckily, a threat to fugitive preachers who try to topple elected governments back home.

The terrorists struck out in Turkey. God forbid, but they may be on the lookout for new terror playing fields. The EU, Washington and all other nations must do just as the Turkish people did on July 15 and 16 just five years ago: show solidarity, stand hand in hand and shoulder to shoulder. Unfortunately, terrorism knows no national frontiers. Fortunately, neither does democracy.