Palestinian prisoners are free even when captured 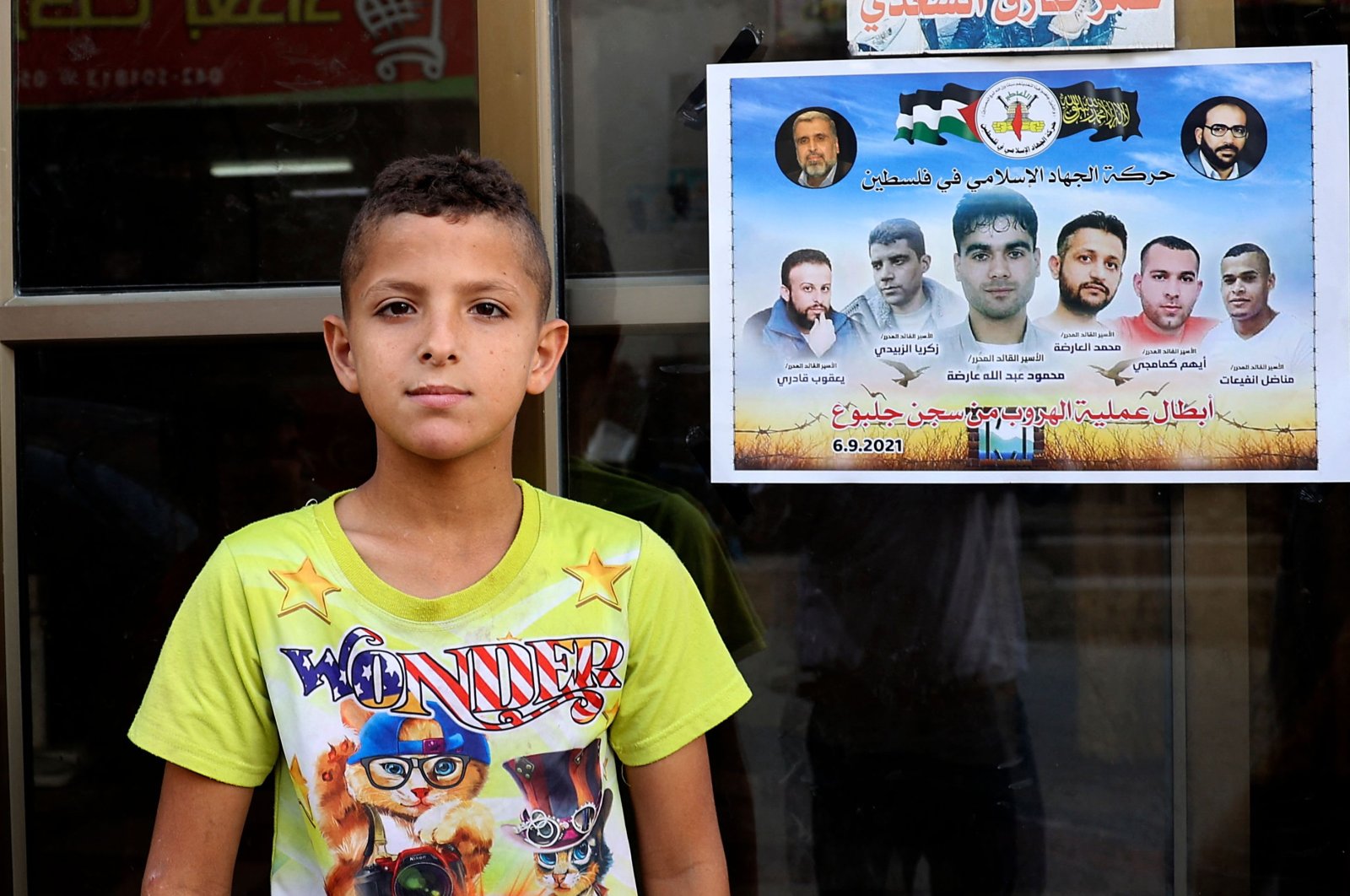 A Palestinian child looks on while standing next to a poster expressing solidarity with the six Palestinian prisoners who escaped from Israel's Gilboa prison, hanging outside a shop at the Jenin camp for Palestinian refugees in the north of the occupied West Bank, Palestine, Sept. 12, 2021. (AFP Photo)
by Najla M. Shahwan Sep 18, 2021 12:05 am

The escape of six Palestinian prisoners from Israel's Gilboa Prison affected the whole world. But there are still hundreds of Palestinian "prisoners" inside and outside the jails

It was not a Hollywood movie that featured a prison escape, both tonally and practically, emphasizing the conditions that created the need for the escape, the process of planning and strategizing the escape including the teamwork. No, it was not the “Great Escape” movie, it was a real-life escape, and an actual atmosphere of fear, fascism, paranoia and injustice.

One of the most important aspects of the prison escapes is that they emphasize the oppression and abjection promoted by Israeli prisons, especially within the Israeli injustice system that relies on occupational carceral institutions.

Six Palestinian prisoners attempted to extricate themselves for another chance at freedom because freedom is absolutely worth the risks of being captured.

A shocking prison break recently caused Israeli authorities to launch a massive manhunt in the north of occupied Palestinian and the West Bank after six Palestinian prisoners escaped an Israeli jail through a tunnel.

Digging with a rusty spoon

Around 1.30 a.m. the first prisoner poked his head up through a hole in a dirt track just opposite the jail tower and hauled himself above ground followed by a second and third. All six prisoners emerged within 10 minutes.

The prisoners are believed to have been digging a hole for months by scraping a rusty spoon on the floor of their cell at the highly secure Gilboa prison. They then crawled 32 yards (29 meters) through a cavity and tunneled beneath the outer wall emerging from the hole.

The six prisoners have vanished from Gilboa Prison, in what prison officials say was the biggest Palestinian jailbreak of its kind.

What is certain is that the six men left their shared cell by removing a small part of the floor of their communal shower cubicle, a video released by the prison service showed. Then they lowered themselves into a pre-existing subterranean cavity that extended beneath the prison and toward its perimeter, allowing them to evade 40 prison guards, three watchtowers, two walls, two barbed-wire fences and a pack of sniffer dogs, said a spokesperson for the prison service.

All jailed by Israel – for so-called serious terrorism offenses – the inmates tunneled out of their cell and escaped.

The six prisoners included Zakaria Zubeidi, a former commander of the Palestinian militant group Al-Aqsa Martyrs Brigade in the West Bank city of Jenin, as well as five members of Islamic Jihad.

Four of the Islamic Jihad members were serving life sentences after being convicted of planning or carrying out attacks that killed Israelis, while the fifth had been held without charge for two years under a so-called administrative detention order, according to Israeli media.

Zubeidi was arrested by Israeli forces in 2019 on suspicion of involvement in a number of shooting attacks and is currently standing trial.

An Israel Prison Service official described the escape as "a major security and intelligence failure." Palestinian groups hailed it as "heroic."

The six men were among about 5,000 Palestinians incarcerated in Israeli prisons after being convicted or accused of militant activity. The escape marked an embarrassing security breach just ahead of the Jewish New Year, when Israelis usually flock to the north to enjoy beaches, campsites and the Sea of Galilee.

The incident constituted a rare humiliation of the Israeli security establishment and has provoked alarm about the security lapses that may have aided the fugitives’ escape.

Israeli Prime Minister Naftali Bennett spoke to Public Security Minister Omer Bar-Lev and "emphasized that this is a grave incident that requires an across-the-board effort by the security forces" to find the fugitives.

On the other hand, Islamic Jihad described the jailbreak as "heroic" and said it would "shock the Israeli defense system," while Hamas spokesperson Fawzi Barhoum said it was a "great victory" that proves "the will and determination of our brave soldiers inside the prisons of the enemy cannot be defeated."

Located in the north of Palestine, Gilboa prison was established in 2004 next to Shatta prison in the (Beesan) area. It is a high-security prison known as "The Safe,” and is described as the most intensely secured of its kind where occupation authorities incarcerate Palestinian prisoners.

This prison was the site of a failed escape attempt in 2014 when a tunnel was found leading from a bathroom, which appears to have exploited the same structural issues used in the latest escape.

Prisons are a disturbingly common experience for most Palestinians who are struggling for their freedom and around one-fifth of the population has at one time or another been imprisoned since the 1967 war.

Thousands of Palestinians have been held under “administrative detention" without being charged or even told what crime they are suspected of having committed.

In jail, Palestinian prisoners live in appalling conditions and are subjected to harsh treatment.

Human rights groups have documented various forms of physical and psychological abuse as arbitrary beatings, excessive use of solitary confinement and the denial of family visits.

The U.N. has concluded some techniques used by the Israeli Shin Bet (General Security Service) during prisoner interrogation constitute torture.

Last June, Addameer Prisoner Support and Human Rights Association called, among others, on the International Criminal Court (ICC) to initiate investigations into the situation of Palestine for crimes against humanity and war crimes, taking into account the multitude of forms of torture and ill-treatment systematically perpetrated against Palestinian prisoners and detainees.

The six prisoners fled for their freedom and are still free even when captured as freedom is not geographical – it is a state of mind and a strong belief in a just cause.

For decades Palestinians have inhabited the “Biggest Prison on Earth,” a title which professor Ilan Pappe perfectly chose for his book exposing the brutal effects of the Israeli occupation, from the systematic abuse of human and civil rights, such as military roadblocks, mass arrests, property demolitions and house searches, to the forced population transfers, the annexation of land, proliferation of unlawful settlements and the infamous Separation Wall that rapidly turned the West Bank into an open prison.

Freedom remains the challenge, goal and hope for every Palestinian inside and outside the prison and fighting for it will continue until justice and liberty are granted.