Regional challenges with US withdrawal from Afghanistan 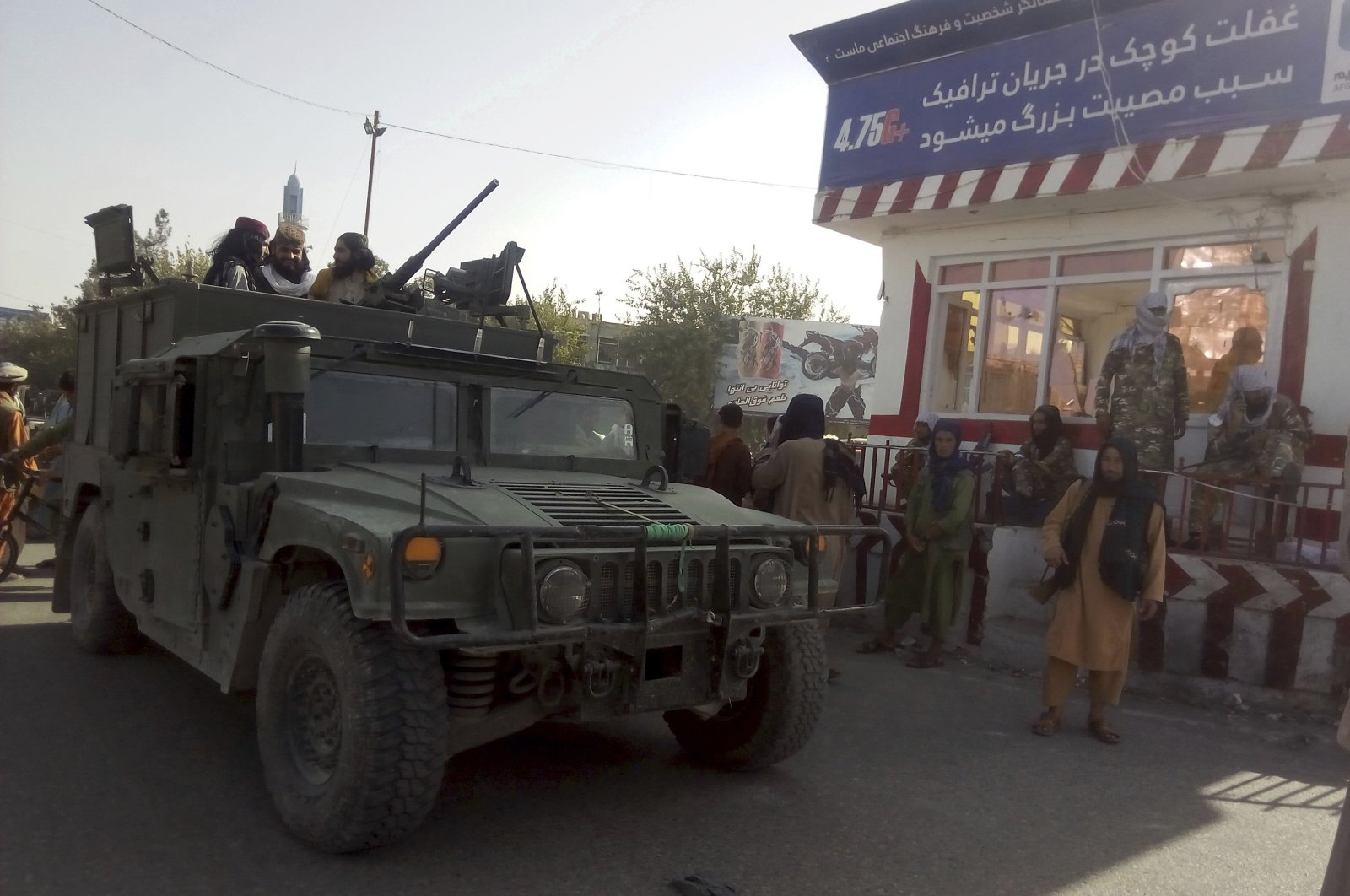 Both the Afghan people and neighboring countries are worried as the Taliban vie for control of Afghanistan. Afghanistan must not be abandoned to anarchy and lawlessness

In recent weeks, international diplomacy's focus has shifted from the Middle East to Afghanistan, where the U.S. troops have begun their withdrawal after two decades of waging war on terror. In this war, the U.S. failed to accomplish the dream of recasting the "archaic tribal land" of Afghanistan into a functional democracy and remodeling a war-torn ethnic society into a terror-free liberal, plural social order.

The withdrawal began after a year of marathon negotiations between the U.S. and the Taliban, who finally came to an understanding in February 2020 in Doha. The U.S. had entered Afghanistan in 2001 under “Operation Enduring Freedom” to dislodge the Taliban from power and smoke Osama Bin Laden, who was allegedly behind 9/11, out of a cave.

Since then, Afghanistan has endured four U.S. presidents for whom the decimation of terrorism remained the principal goal of U.S. foreign policy. Current President Joe Biden had said in 2006 that he could not think of war more justified since World War II, but in 2010, while serving as former President Barrack Obama's deputy, he called for an early withdrawal in 2014. Now president, Biden said in a meeting with his Afghan counterpart on June 25 that Afghans are going to have to decide their future.

The withdrawal of U.S. forces will be complete by Aug. 31, marking the end of the longest war in U.S. history. The land of Afghanistan is known as the graveyard of empires for a reason; it now serves as the graveyard of America's arrogance if not Pax Americana.

Two decades of war have cost the U.S. 3,500 of its soldiers, 38,00 private U.S. contractors and 1,144 NATO personnel, including 454 British soldiers, 72 journalists and 444 aid workers. The war has also left 47,000 civilians and 7,000 soldiers of Afghan origin dead. The conflict has sent 3 million Afghans as refugees to Pakistan and 2 million more to Iran in addition to displacing 3.5 million Afghans internally.

The U.S.’s claim of victory against terrorism seems hollow and the reality of present-day Afghanistan is just the opposite of what is being applauded.

The U.S. spent more than $2 trillion to train the Afghan army but the U.S.-trained Afghan army deployed at the Pakistan-Afghanistan border could not withstand the Taliban’s recent attack and fled into Pakistani territories.

Today 50% of Afghan territories are under the direct control of the Taliban, 30% remain under government control and a fierce battle rages for what's left. Many have predicted that Kabul will fall in a matter of weeks or months.

A recent U.S. reports suggests that coordination among Afghan Taliban, its Pakistani affiliate TTP, the Haqqani group and Al-Qaida has deepened further. In the weeks of the start of U.S. withdrawal, around 3,500 Afghans, both civilians and soldiers, were killed from both sides and around 200,000 have left their home regions.

The ongoing Taliban offensive could once again throw the country back to the 1990s. President Ghani’s forces may find it difficult to delay the inevitable fall of his government as even the CIA in its recent report predicted the fall of the Kabul government within six months.

Saifullah, 35, says that the U.S. and U.K. came and fanned the flames of war, and the U.S. withdrawal leaves the country in a life and death struggle. The Taliban are trampling in every direction and have reportedly captured Sher Khan Bandar, a town bordering Tajikistan. Fighting continues in Kunduz in northern Afghanistan and in the predominantly Shiite town of Mazar-e-Sharif.

The province of Helmand in southern Afghanistan is completely under siege in the battle between the two sides. A flag with the Taliban emblem flies high at the victory gate of Herat. One resident said what was ours yesterday could be the Taliban’s today. U.S. Secretary of State Antony Blinken recently noted that Afghanistan might soon turn into a rogue state if the Taliban are not resisted.

Afghanistan's strategic location has historically meant that its neighbors are aware of the happenings on the ground in the country, and the same holds true today. Afghanistan is already heading towards implosion, something that would certainly impact bordering countries like Pakistan, Iran, China, Tajikistan and Uzbekistan and the contiguous region.

Every regional country has opened a diplomatic channel with the Taliban and every other week one capital or another hosts Taliban representatives to discuss Afghanistan's future. The Shanghai Cooperation Organization (SCO) meeting held at the foreign ministerial level on July 13-14 in Dushanbe was held with the same objective.

The most affected country is likely Pakistan as it shares the longest border with Afghanistan. Civil war in Afghanistan could directly affect Pakistan and it could have to host more refugees, in addition to the 3 million already in the country.

Pakistan had already shut its border town of Wesh with Afghanistan, which sits opposite the Chaman Afghanistan-Pakistan border, after it was rampaged by Taliban. A Taliban flag was hoisted at Weshmandi, a crucial point of the Pakistani-Afghan crossing.

Extremist movements’ on the battlefield in Afghanistan could bolster extremist forces in Pakistani, and smaller radical groups may find a mentor in the Taliban and create trouble for the country already trapped in war against terrorism.

Pakistan entered the U.S.-led war in 2002 reluctantly. It always maintained its alliance with the Taliban above and below the table, making Pakistan the holder of the most valuable cards in the post-U.S. Afghanistan.

But the country's joy over the U.S. withdrawal is dampened by worries about long-term consequences not just in terms of security but spreading to other social milieus as well.

The significance of Pakistan in Afghan politics can be captured by the statement of the Afghan president who said that whether there is peace or hostility is now completely in Pakistan's hands. Pakistan has invested heavily in Afghanistan in its four decades of multiple engagements and could try to regain the ground lost after the U.S. attack in 2001.

Another neighbor of Afghanistan, Iran shares a 572-mile (around 920-kilometer) border with Afghanistan and today its buffer zone provinces of Helmand and Kunduz are in full control of the Taliban.

Iran has also taken additional security measures fearing the violence could spill over into its territories. Iran is still haunted by the ghastly killing of nine of its diplomats and a journalist in 1998 in the town Mazar-e-Sharif at the hand of the Taliban and it still fears the rise of an anti-Iran Sunni militia on its border.

Aware of the prospect of the Taliban emerging as a strategic actor, Iran hosted a Taliban delegation led by Mullah Abdul Ghani for a week in January this year, saying that it is part of Tehran’s policy to communicate with parties involved in the peace process. Though the U.S. accused Iran of hobnobbing with the Taliban to weaken U.S. forces in Afghanistan.

China has its own concerns about the Taliban's deepening footprint in Afghanistan's political sphere as it is eying Afghanistan as a major investment destination. Chinese is fearful of future cooperation between the ascending Taliban and Uyghur Muslims.

China is already jittered by the killing of its nine employees in northwest Pakistan at the Dasu Hydroelectric Dam and has already evacuated 210 employees engaged in several China-funded projects in Afghanistan. Many of the projects agreed on in past with the Afghan government would have to be approved by the Taliban.

Khorasan Province is reported to be extending assistance to Uyghur Muslims and the arrival of the Taliban may further deepen the cooperation between the two, which would naturally bolster Uyghur movement. Though the Taliban have promised not to interfere in Uyghur affairs, given the growing role of digital technology in spreading terror, nothing can be ruled out.

Similarly, central Asian courtier like Uzbekistan, Tajikistan and Turkmenistan, which all share borders with Afghanistan, are scared of an influx of refugees due to the escalations in violence. Recently Tajikistan deployed 2,000 of its reserve forces on its border following the Taliban advance on the border town of Sher Khan Bander.

These measures are being taken despite assurances from the Taliban that they will not cross into Central Asian countries and will contain other radical groups in Afghan territories.

Many Afghan soldiers have reportedly fled to Uzbekistan and Tajikistan to evade the advancing Taliban forces. Kazakhstan and Kyrgyzstan do not share a border with Afghanistan but they are equally worried about the Taliban's growing control over Afghan territories.

Likewise Russia has not forgotten the humiliation it suffered at the hand of the U.S.-backed Mujahideen in the last century. Any advance by the Taliban does not spell good news for Russia. One should not underestimate the fear expressed by the Russian foreign minister in his talk with his Indian counterpart when he said that there is a need for collective effort to stop the spillover effect from Aghanistan.

Russia is deeply concerned about the Taliban advancing to the borders of Central Asian countries that are not far from Russia. Russia too may have to bear the brunt of the rapid expansion of the Taliban and its franchises.

A group of Taliban leaders held a comprehensive talk in Moscow with the Russian president’s envoy for Afghanistan, Zamir Kabulov. In the talk the Taliban leaders assured that they would not allow Afghan territories to be used against the interest of Russia or any other Central Asian country.

India is worrying as much as other bordering countries about the Taliban's growing ambitions in the political spheres of Afghanistan. India enjoys historical ties with Afghanistan and treats it as its extended neighbor.

India has invested around $3 billion in the past in various developmental projects such as hospitals, schools, Afghanistan's parliament, roads and most prominently, the Salma Dam, which the Taliban recently tried to damage but they were thwarted by Afghan forces.

India does not want to see any radical activities in its neighboring country. India fears the revival of insurgency in Kashmir following the withdrawal of U.S. forces, as witnessed following the Soviet withdrawal in 1989.

Armed groups fighting in Afghanistan will naturally look for new ground to expand their activities and Kashmir could be chosen for a variety of known and unknown reasons.

Whichever political dispensation takes over Afghanistan, India wants assurance that Afghan territories will not be used against India. Due to the growing security crisis, India has already shut three of its consulates in Afghanistan, and India is likely to adopt a different set of policies following the U.S. withdrawal.

Going back to the past

The ongoing withdrawal of U.S. troops and simultaneous chaotic diplomacy has proved that diplomatic exercises are driven more by existing interests than permanent principles.

China, Iran and Russia have almost reconciled with a Taliban-dominated Afghanistan in contrast to the UAE, Pakistan and Saudi Arabia, which were the only three countries to recognize the Taliban in its early days. Today nothing seems promising for Afghanistan and the region as diplomacy fails to deliver results.

There is every reason to worry that the world’s most inflamed country could fall deeper into anarchy. Afghanistan may once again become a hub of drugs and weapons trading, and many extremists may look to Afghanistan as a haven, embracing the Taliban as a mentor.

The Taliban themselves are an amalgamation of different ideologies to prevent disunity, and perhaps that is the only possibility. Afghanistan must be ready for next stage of bloodshed. Over the past few decades, there has never been a negotiated transfer of power. If history is any measure, Afghanistan will remain sovereign without a sovereign, a state without a nation. U.S. Gen. Kenneth McKenzie put it aptly: “withdrawal is not the end of the story but it is merely an end of the chapter.”