Roots of the current Tunisian crisis 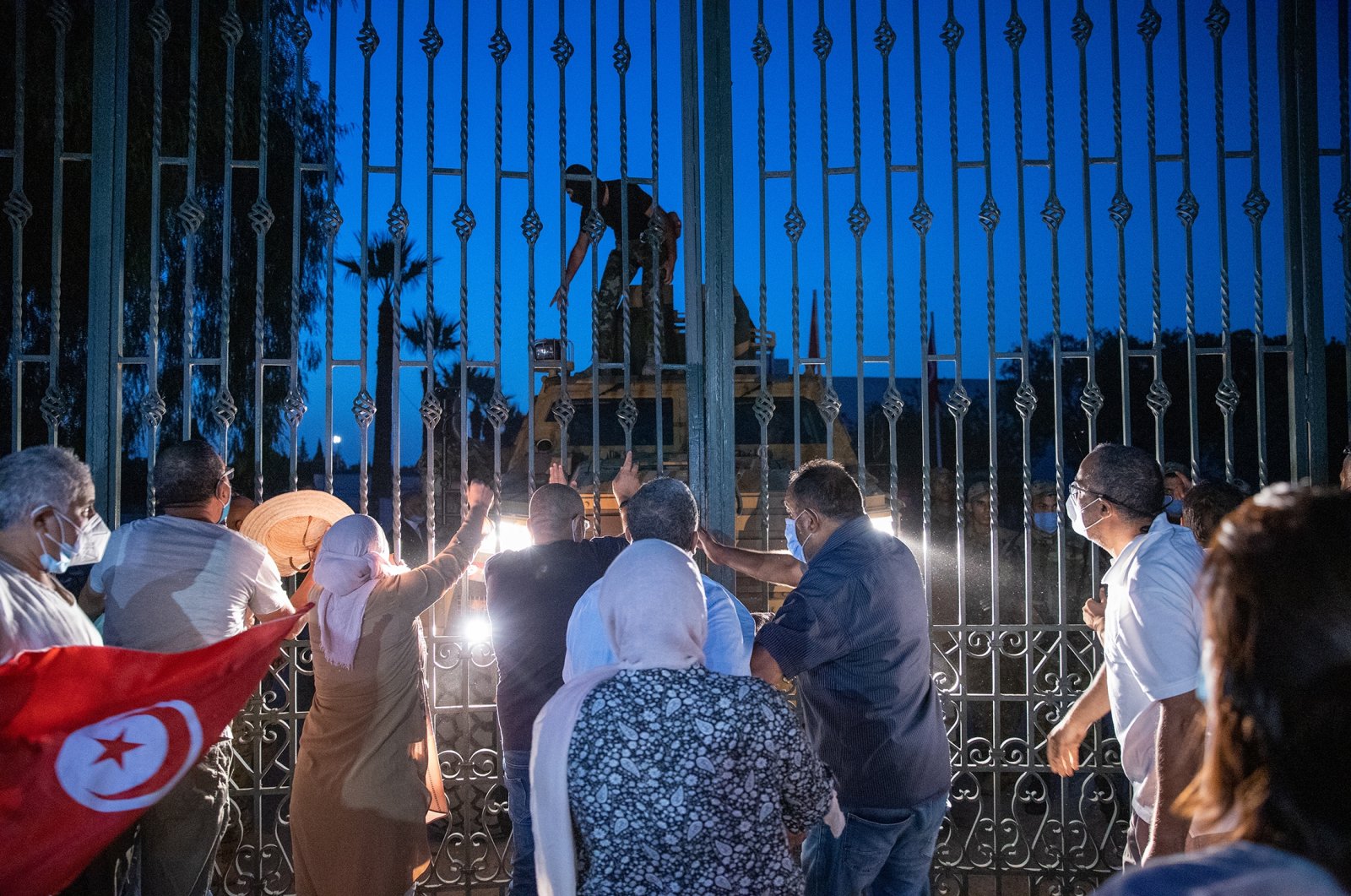 Supporters of the Ennahdha party stand at the gates of the Tunisian Parliament, protesting against the drastic political move widely seen as a coup, Tunis, Tunisia, July 26, 2021. (AA Photo)
by Hamoon Khelghat-Doost – Hande Ortay
Aug 05, 2021 12:05 am

The origin of the coup in Tunisia has many reasons, both ancient and contemporary. The fight against COVID-19, the economic crisis and political instability are the most prominent of these reasons

In a dramatic escalation of a political crisis, Tunisian President Kais Saied dismissed the government and froze parliament on July 25, 2021.

Political tensions continue in Tunisia, with Parliament Speaker Rached Ghannouchi threatening to call on his people and supporters to take to the streets if his party, Ennahdha, will not be consulted in forming the next government.

The party leader's remarks come after the Tunisian president, in coordination with the country's military, decided to oust Prime Minister Hichem Mechichi and dissolve parliament. This happened after a group of protesters who were dissatisfied with the government's performance, especially in the way the COVID-19 crisis was managed, staged demonstrations in different cities of the country.

At the same time, Saied claimed that he was seeking the implementation of the constitution by ousting the prime minister. Meanwhile, Mr. Saied issued a decree suspending the parliament and revoking the immunity of all its members. He also issued another order banning cars from traveling from 7 p.m. to 6 a.m. for a month.

In 2011, Tunisia became the birthplace of the Arab Spring, which quickly engulfed much of the Arab world like a rapid-fire, overthrowing several governments in the region within months. Now, 10 years after the Arab Spring, the nation considered the only successful Arab Spring movement is in crisis.

The situation in Tunisia is critical, and many people compare the events in Tunisia with the coup of General Abdel Fattah el-Sissi and the rise of the military in Egypt. The current political tensions in Tunisia are rooted in different socio-political factors.

The Tunisian government's response to the COVID-19 pandemic has increasingly frustrated people. Just a day before the start of the current round of tensions, 317 people had died from the coronavirus, the country’s highest death toll since the outbreak of the virus last year.

The World Health Organization (WHO) also indicates that Tunisia tops the list in terms of per capita COVID-19 casualties in Africa. The World Data Online magazine, which tracks vaccinations worldwide, estimates that as of July 25, only 8% of Tunisia's 11.9 million people had been vaccinated both times. The critical condition of the country in combating COVID-19 made Turkey send thousands of COVID-19 vaccine dosages and other necessary medical supplies to Tunisia in Early July 2021.

Nationwide vaccination lags far behind many countries. Many Tunisians fear that the already weak health care system would collapse under the rinsing pressure. The fear brought thousands of Tunisians to the streets to protest the government’s strategies in combating the pandemic. The protests are viewed as one of the main reasons for the current political crisis in the country.

The Tunisian economy was in trouble even before the COVID-19 outbreak, but the impact of the pandemic on the national economy, as well as local and small businesses, worsened the situation. Public support for democracy has waned amid surging unemployment and crumbling state services. The country is now struggling with an unemployment rate of 17%, which will likely rise as the detrimental economic impact of the current local crisis ripples throughout the country, exacerbating existing socioeconomic issues.

The COVID-19 pandemic gave a serious blow to Tunisia's tourism industry that employs 10% of the active population, and via which the nation's officials were counting on reviving the economy as it contributes greatly to its annual gross domestic product (GDP).

Additionally, almost a quarter of formal firms, mainly in the services sector, were either temporarily or permanently closed by the end of 2020, which made the GDP contract by 8.8%.

The political crisis in Tunisia has deeper roots. Since the Arab Spring protests in January 2011 and the ouster of longtime President Zine El Abidine Ben Ali, nine governments have taken office, some of them lasted just a few months.

In the 2019 elections, as well as in the last parliamentary elections, none of the parties won a parliamentary majority, resulting in a coalition government of parties across the political spectrum – sometimes politically opposed to each other. This has caused the government to face an inefficiency crisis, which triggered widespread dissatisfaction among Tunisians.

Protest becoming a routine means for citizens to express grievances and demand redress denotes a failure of democracy. Tunisia has been more successful than any other Arab country since 2011 in establishing the formal institutions and processes of democracy.

However, those institutions appear to be failing to address the problems and complaints of citizens, who are turning elsewhere to make their voices heard, mainly the streets. The failure of political parties to provide the channel between citizens and government is at the center of this failure which can threaten the country's stability in the near future.