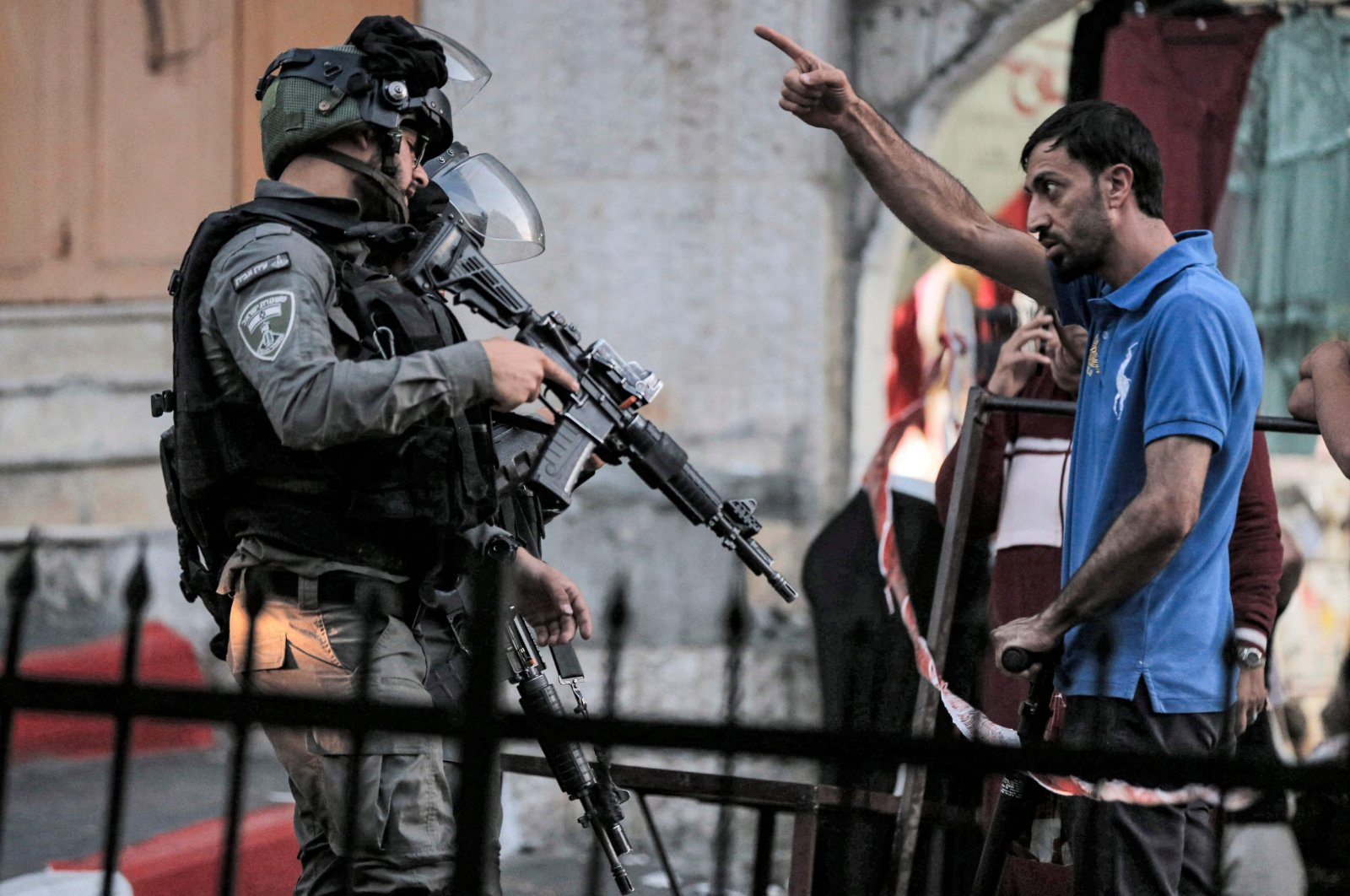 A Palestinian man argues with Israeli border guards blocking a street for a procession of Israelis on Tisha B'Av marching towards the shrine of Atnaeil Ben Kinaz in the flashpoint city of Hebron in the occupied West Bank, Palestine, June 18, 2021. (AFP Photo)
by Najla M. Shahwan Jul 25, 2021 8:31 am
RECOMMENDED

Since 1967, the question of Israeli settlements is old news to followers of the Israeli-Palestinian conflict. However, the new facts on the ground are reaching unprecedented dimensions as almost every week, new plans for the expansion of existing settlements or the erection of new outposts are announced, disrupting the political landscape of what is, according to international consensus, to be the future Palestinian state.

Occupying the West Bank in 1967 was an important strategic gain from the Israeli viewpoint, and successive governments have ignored the Green Line – as the 1949 cease-fire lines were called – and built numerous Israeli settlements on the Palestinian territory.

The settlements are illegal under international law, but Israel disputes this. Despite signing various agreements to curb settlement growth, it has pressed ahead with its activity, citing historical ties to the land on which they sit and its own security needs.

Today, there are nearly 300 settlements in occupied East Jerusalem and the West Bank, housing more than 680,000 Israeli settlers. Settlements have a separate civil infrastructure to surrounding Palestinian areas and are protected by a vast military infrastructure.

The first settlers were religious Jews who remained in Hebron after celebrating Passover there in 1968.

The settlement movement has become closely affiliated to Jewish religious nationalism, which claims boundaries of modern Israel based on Genesis 15:18: "God made a covenant with Abram and said, 'To your descendants, I give this land, from the river of Egypt to the great river, the Euphrates.'"

Therefore, on both political and religious grounds, it has been extremely sensitive for Israeli politicians to dabble in land-for-peace negotiations.

Prime Minister Yitzhak Rabin pushed for a two-state solution in the 1990s, and was made to pay for it with a Jewish nationalist assassin's bullet.

Successors Ehud Barak and Ariel Sharon unilaterally pulled out of south Lebanon and Gaza, respectively – both of which moves were followed by a resurgence of violent confrontation in subsequent years, discrediting that approach.

Benjamin Netanyahu managed to put the brakes on Rabin's historic drive for a two-state solution in the 1990s and had been in no rush to get to the negotiating table during his 12-year post as prime minister.

From the Palestinian and Arab viewpoint, the minimum acceptable territorial solution for a Palestinian-Israeli settlement is a complete withdrawal from all the land occupied in 1967.

Israel has sought to ring-fence East Jerusalem from any territorial retreat, and it hopes to annex the largest settlement blocs on the east side of the Green Line, which house a large majority of settlers.

This would involve adjustments to the Green Line, perhaps involving Israel swapping its territory for the settlements Ariel, Modiin Illit, Maale Adumim, Gush Etzion and many more.

The new Israeli prime minister Naftali Bennett is a supporter of Israeli settlements and opposed to Palestinian statehood. Although he presides over a patchwork coalition of right-wing, centrist and left-wing parties that include lawmakers who oppose settlements and favor a Palestinian state, his government is not moving the dial away from former Prime Minister Benjamin Netanyahu’s expansionist policies.

Recently a compromise was reached between Bennett’s government and Israeli settlers over an unauthorized outpost named Eviatar in the occupied West Bank.

Under the agreement, the settlers will leave the Givat Eviatar outpost in the Israeli-occupied West Bank. Some of the outpost's new buildings would remain, locked and under military guard, an outcome that angered Palestinian protesters who demand it be removed.

Troops would stay, and a land survey would be conducted to determine if a government-backed settlement can be established there.

The hilltop settlement near the Palestinian city of Nablus was established without Israeli government permits last May and is now home to more than 50 families.

In response, Interior Minister Ayelet Shaked, a member of Bennett’s pro-settler Yamina party, tweeted that the agreement was “an important achievement” for settlement in the land of Israel and thanked “the pioneers of Eviatar who with devotion demonstrate what Zionism is.”

The U.S. State Department said it was critical to refrain from any unilateral steps that would exacerbate tensions or undercut efforts to advance freedoms. "And this would include establishing outposts which are illegal even under Israeli law," said Department deputy spokesperson Jalina Porter in a briefing.

Presenting his latest report to the U.N. Human Rights Council in Geneva, Michael Lynk, the United Nations special rapporteur on the rights situation in the occupied Palestinian territories, said the settlements constitute a “violation of the absolute prohibition against settler implantation.”

“In my report, I conclude that the Israeli settlements do amount to a war crime,” the U.N. expert said.

He said the settlements violate an absolute ban on an occupying power transferring part of its civilian population into occupied territory, thereby meeting the definition of a war crime under the Rome Statute founding the International Criminal Court (ICC).

“I submit to you that this finding compels the international community ... to make it clear to Israel that its illegal occupation, and its defiance of international law and international opinion, can and will no longer be cost-free,” Lynk told the Geneva rights forum.

Lynk added that Israel’s demolition of Bedouin tent dwellings in a village in the occupied West Bank recently left residents without food or water in the heat of the Jordan Valley, calling it “both unlawful and heartless.”

“Progressive seizure of Palestinian lands together with the protection of the settlements is a further consolidation of Israel’s de facto annexation of the West Bank,” he said.

The United States, Israel’s closest ally on the council, did not speak at the council, accusing it of having an anti-Israel bias.

Lotte Knudsen, the European Union’s ambassador to the United Nations in Geneva, said the settlements were illegal under international law.

“Such actions as forced transfers, evictions, demolitions, and confiscation of homes will only escalate an already tense environment.”

The settlements have become “the engine of Israel’s 54-year-old occupation, the longest in the modern world,” Lynk added.

International action, not just words, was needed to resolve the situation, he said.

“As long as the international community criticizes Israel without seeking consequences and accountability, it is magical thinking to believe that the 54-year-old occupation will end and the Palestinians will finally realize their right to self-determination.”

After 73 years of conflict and 54 years of the Israeli occupation of Palestinian territory, the settlements and their ongoing expansion lie at the heart of the conflict – comprising a cornerstone in Israel’s policies toward the Palestinians and overshadow any attempt for a just solution to the conflict.

Israel’s ongoing territorial expansion into Palestinian land and the current political geography of the occupied Palestinian territory is changing with rapid speed as the de facto has come to undermine a two-state solution and is turning into a facade for a very different political game playing out in the occupied territory of the West Bank and Israeli-annexed East Jerusalem.

The settlement policies inside what are internationally recognized as Palestinian territories are not merely undermining the realization of the two-state solution, but the territorial claims put forward – pursued in practice and anchored in strategies of legitimization – are reaching far beyond international legal standards and, in the course of settlement construction, dangerously shifting its blatant role in turning the occupation permanent.