What to expect from Bennett on Israel-Palestine line? 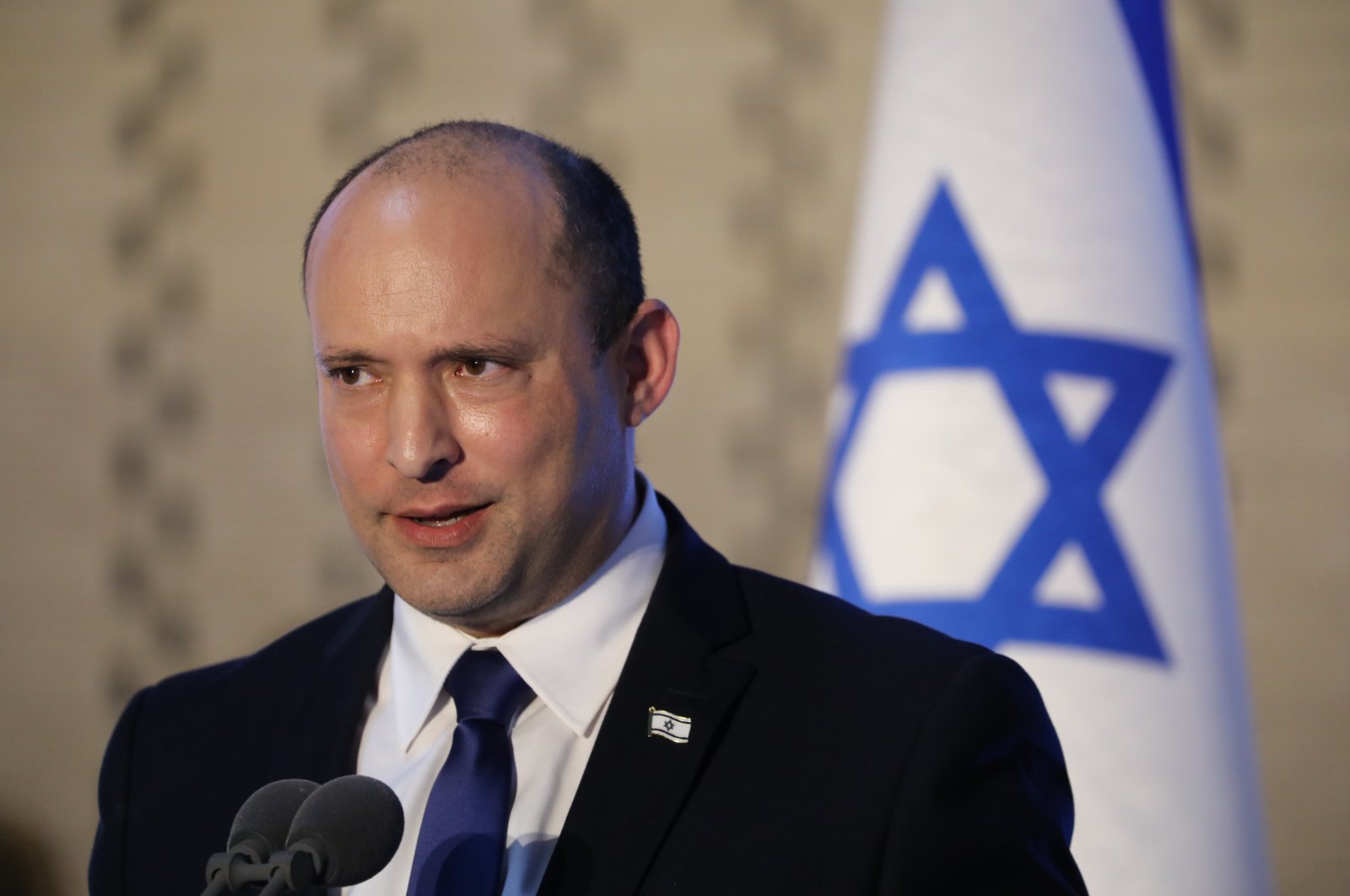 Israeli Prime Minister Naftali Bennett speaks during a memorial ceremony for Israeli soldiers who fell in battle in the 2014 Gaza War during "Operation Protective Edge," at the Hall of Remembrance of Mount Herzl Military Cemetery in West Jerusalem, Israel, June 20, 2021. (EPA Photo)
by Najla M. Shahwan Jun 29, 2021 12:05 am

What the end of the 12-year Netanyahu term in Israel means for Palestinians is still unclear. Palestinians deny that the most complex government in Israel's history represents a change

For the first time in more than a decade, Israel has welcomed a new government headed by Prime Minister Naftali Bennett, who was sworn in last Sunday after a new coalition unseated longtime Israeli leader Benjamin Netanyahu.

The right-wing nationalist will lead an unprecedented coalition of parties backed by lawmakers in last Sunday's 60-59 vote. He succeeds Benjamin Netanyahu who was forced out of office after 12 years.

Bennett, leader of the Yamina party, will be prime minister until September 2023 as part of a power-sharing deal and will then hand power over to Yair Lapid, head of the centrist Yesh Atid, for a further two years.

Netanyahu, Israel's longest-serving prime minister, will remain head of the right-wing Likud party and become the leader of the opposition.

He is a supporter of the West Bank settlers’ movement, served briefly as head of a major settler organization and his party is one of three in the coalition that strongly supports settlements.

This government that vowed change will be unlike any to have preceded it in Israel's 73-year history, as the alliance contains parties that have vast ideological differences, and perhaps the most complex formula.

The alliance includes the left-wing Meretz party that supports the two-state solution as part of its platform, Lapid, who has consistently stated support for a two-state solution and Merav Michaeli, the head of Labor, another party that had previously dominated Israeli politics for decades and largely supported the peace process.

Another part of the alliance is the leader of the Raam party, Mansour Abbas, who was one of only 13 Knesset members to vote against Israel’s normalization deal with the UAE, on the grounds that the Abraham Accords were a replacement for the principle of “land for peace,” thus undermining the prospect of reaching a two-state solution.

In order to remain united, the coalition government has agreed to hold off on major decisions surrounding controversial issues, such as the future of the occupied Palestinian territories, and to concentrate on domestic issues such as rebuilding the economy in the wake of the pandemic, proceeding with judicial appointments, expanding economic programs and pursuing legal reform.

Bennett said little about the Palestinians in his speech before being sworn in. “Violence will be met with a firm response,” he warned, adding that “security calm will lead to economic moves, which will lead to reducing friction and conflict.”

On her part Environment Minister Tamar Zandberg, a member of the dovish Meretz party, told Israeli television Channel 12 that she believes the peace process is important, but that the new government has agreed, “at least at this stage, not to deal with it.”

Bennett’s best hope for maintaining his ruling coalition will be to manage the conflict. This was the same approach favored by his predecessor, Netanyahu.

Netanyahu used most of his 12 years in the office to allow the growth of Israeli settlements in the occupied West Bank and East Jerusalem, frustrating Palestinians who aspire for statehood, and aligned Israel with right-wing leaders internationally. He paid lip service to a two-state solution mainly to conciliate the U.S., though he never sought to advance it.

Palestinians continued resisting the occupation and the expansion of Israeli settlements in occupied East Jerusalem, but the Israeli government's deadly shootings and a series of discriminatory measures that well-known human rights groups described as apartheid, didn't slow down.

Palestinian groups have disregarded the change of the Israeli government, saying that the new prime minister will likely pursue the same right-wing agenda as his predecessor.

“This is an internal Israeli affair,” said Nabil Abu Rudeineh, spokesperson for Abbas. “Our position has always been clear, what we want is a Palestinian state on the 1967 borders with Jerusalem as its capital,” he said.

The Palestinian Foreign Ministry, meanwhile, issued a statement saying it was “inaccurate” to call Bennett’s coalition government a “government of change” unless there was a significant shift in its position on the Palestinian right to self-determination and the establishment of an independent Palestinian state with East Jerusalem as its capital.

The ministry posed a host of questions to Bennett’s government. “What is the position of the new government regarding the Palestinian people’s right? What is its position of the settlement and annexation processes?"

In Gaza, Palestinian groups vowed to keep resisting Israel. “We aren’t counting on any change in the occupation governments since they are united on the policy of killing Palestinians and confiscating Palestinian rights,” said Sami Abu Zuhri, a senior Hamas official.

This so-called Israeli new “Change Government” will be the most ideologically diverse in Israel’s history, divided by fundamental fault lines on critical issues, and is under no significant pressure to make concessions to the Palestinians.

Washington's approach to this issue is formulaic, although following the latest Gaza flare-up President Joe Biden asked for the resumption of talks on a two-state solution. Even though that solution is something his advisers, if not he, know will now be out of reach as they are facing a reluctant partner given Bennett’s hard-line views on the Palestinian issue.

The Israeli-Palestinian conflict will remain the most contentious and divisive arena for this coalition, which will be tested by fire by the issues relating to it and the sequence of events that could unfold at any time.