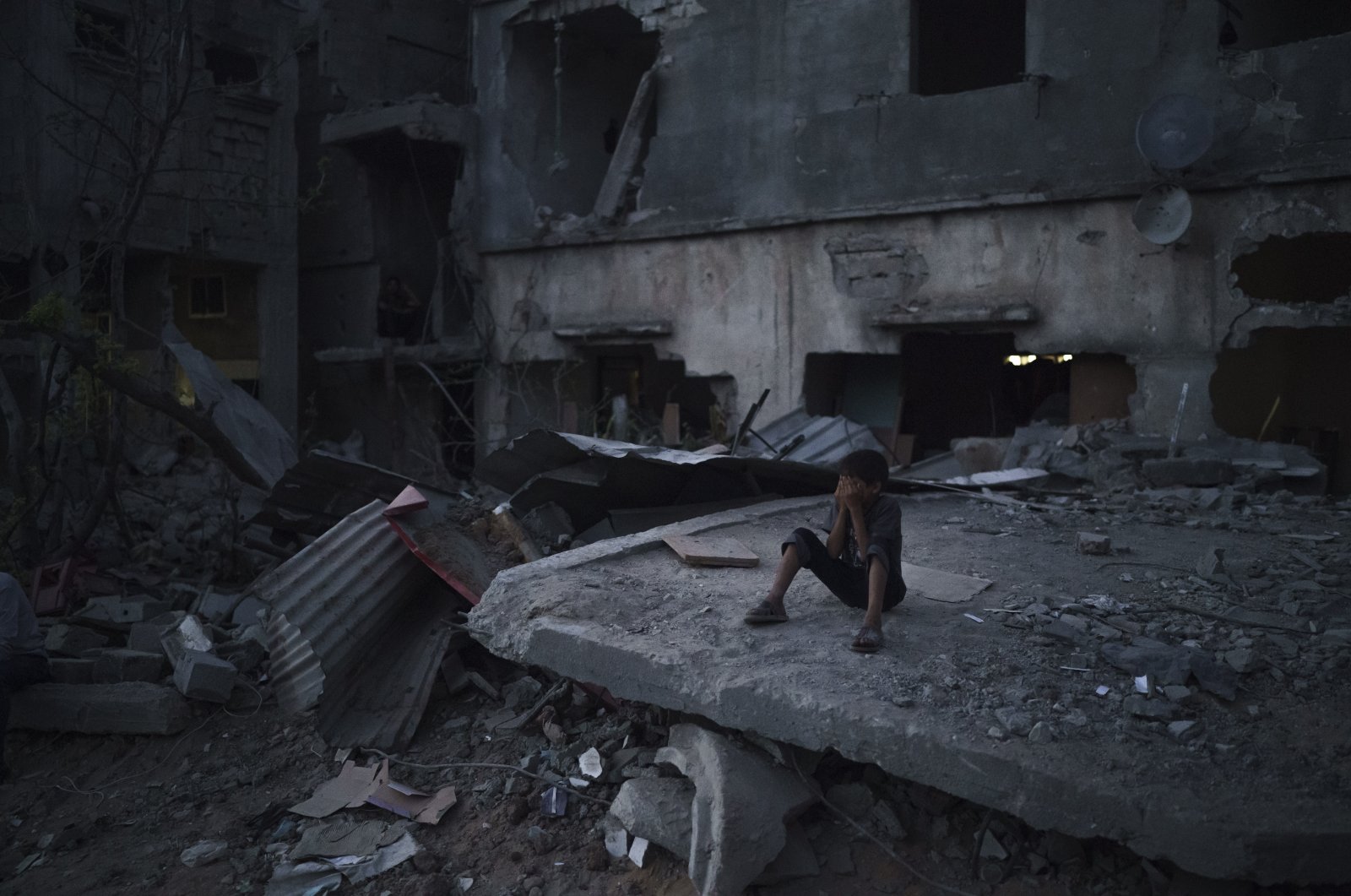 A boy sits on a destroyed building in a neighborhood heavily damaged by Israeli airstrikes, in Beit Hanoun, Gaza Strip, Palestine, May 31, 2021. (AP Photo)
by Najla M. Shahwan Jun 03, 2021 12:05 am
RECOMMENDED

The latest round of the Israeli-Palestinian conflict has seen an unusual surge in violence between Palestinian Arabs and Jewish communities living in Israel, drawing attention to the status and future of the 1.9 million Palestinian Arab Israeli citizens, who make up around 21% of the population.

Palestinian Arabs of Israel – also referred to as "48 Arabs," "Palestinian Israelis," or "Arab-Israelis" – are descendants of the 150,000 Palestinians who remained inside the so-called Green Line drawn between Israel and Jordan after the 1948 Palestinian exodus or nakba, which occurred when hundreds of thousands of Palestinians were forced to flee during the 1948 war over Israel's establishment.

They include Muslims, Christians, Druze (a religious minority) and Bedouins. In theory, Arab Israelis have the same rights as Jewish Israelis but, in practice, they are treated as second-class citizens and face discrimination in many aspects of their lives.

Last month, in an unprecedented conflict, Arab citizens of Israel took to the streets of Haifa, Lod and other cities in Israel in parallel with Israel’s fourth conflict with the Palestinian Hamas resistance group that rules the Gaza Strip.

The people were on the streets when the conflict intensified and protests erupted in the Israeli-occupied East Jerusalem over the eviction of Palestinian families in the Sheikh Jarrah neighborhood.

The large mass protests, not seen in decades, gave way to violent unrest and mobs on both sides assaulted civilians in some of the worst intercommunal strife in mixed cities where Jews and Arabs live alongside each other.

In past instances, Arab rioters had burned synagogues and far-right Jewish groups had destroyed Arab shops, businesses and homes chanting “Death to Arabs.”

Jewish extremists who view Arabs in Israel as a hostile threat vandalized Arab Israeli schools and mosques as well.

Although Arab Israelis protested Israel’s 2014 war in Gaza, this violence, appears to be the most widespread civil unrest among Israeli Arabs in decades.

Israel has one of the most unequal societies in the developed world, mostly due to its continued discrimination against Palestinian citizens particularly with regard to land, planning, budget allocation, housing, infrastructure, economic development, education, policing and political participation.

On July 18, 2018, the Israeli Parliament (Knesset) passed the “Jewish Nation-State Law” which disregards the rights of indigenous Palestinian citizens of Israel and cements their status as second-class citizens.

The very law gives Jews, wherever they are on the planet, exclusive rights to self-determination in Israel.

The legislation clearly reveals the face of racism in Israel by declaring that the country is “the historic homeland of the Jewish people” and that “the rights to exercise national self-determination in Israel is unique to the Jewish people.”

Besides, the law specifically establishes Hebrew as the “official language” downgrading Arabic to what the law calls “special status.”

More dangerously the law also claims the internationally illegal “Jewish settlements (colonies),” including those built in the occupied territories after the 1967 war in Palestine and Syria’s Golan Heights, are “of a national value.”

However, by this law, Israel has eventually chosen the religiousness of its identity rather than its own controversial brand of democracy.

Arabs constitute more than half of the poor families in Israel and Arab municipalities are the poorest ones in the country.

According to Adalah – The Legal Center for Arab Minority Rights in Israel, Israel maintains over 65 laws that discriminate against Palestinians.

The vast majority of Palestinians in Israel, live in around 139 towns and villages and receive only 1.7% of the state budget for local councils.

Last August, Adalah and the Arab Center for Alternative Planning filed a petition to the Israeli Supreme Court on behalf of 10 local Palestinian councils and dozens of Palestinian citizens of Israel against government policy discriminating against these communities in the distribution of housing, construction and land development benefits compared to neighboring Jewish communities that enjoy higher socioeconomic status and have access to such benefits.

In December, the magistrate court in Krayot, near Haifa, rejected a petition for access to education by Palestinian citizens of Israel living in Karmiel, citing the discriminatory law.

The decision said that establishing an Arabic school in the town or funding transport for its Palestinian residents to study in Arabic schools in nearby communities would undermine the town’s “Jewish character.”

On the other hand, Israel continues to deny Palestinians from the West Bank and Gaza married to Palestinian citizens of Israel the right to nationality by enforcing the discriminatory Entry to Israel Law.

Arabs and Jews in Israel largely live in separate societies. Most cities in Israel are either Jewish or Arab while Arab and Jewish Israelis attend separate schools, save for a small number who go to a handful of joint Jewish-Arab schools.

Few cities in Israel are “mixed,” with large Arab and Jewish populations living side by side and although these cities are sometimes praised as models of coexistence, divergences between the two communities continue and some of them, like Lod and Ramle, have recently seen grievous violence.

While Arab Israelis have representation in parliament, an Arab Israeli party has never been part of a governing coalition.

In recent years, the prevalent aspect of hostility and mistrust toward Arab citizens in Israel has become more obvious, with large sections of the Israeli public viewing the Arab minority as both a fifth column and a demographic threat.

What is the conflict?

Most Arab Israelis are broadly sympathetic to the plight of Palestinians living in occupied East Jerusalem, West Bank and Gaza Strip and many have members of their extended families living in these occupied territories.

Support for the Palestinian cause is widespread within the Arab Israeli community and the assertive identity of Palestinians in Israel runs parallel to an ongoing reframing of the Israeli-Palestinian conflict as a civil rights struggle, both in Israel and the occupied territories.

Like the previous rounds of fighting between Israelis and Palestinians, the cease-fire is just a pause.

The conflict is not just unresolved, it is not even frozen and the cease-fire will hold until it is tested by a crisis caused by the ongoing discrimination toward Palestinians in Israel, in East Jerusalem and in the occupied territories.

The violence has stopped, but the grievances and bitterness that sparked the unrest are far from resolved.