Why the PKK does not represent Kurds: Case of Töremiş 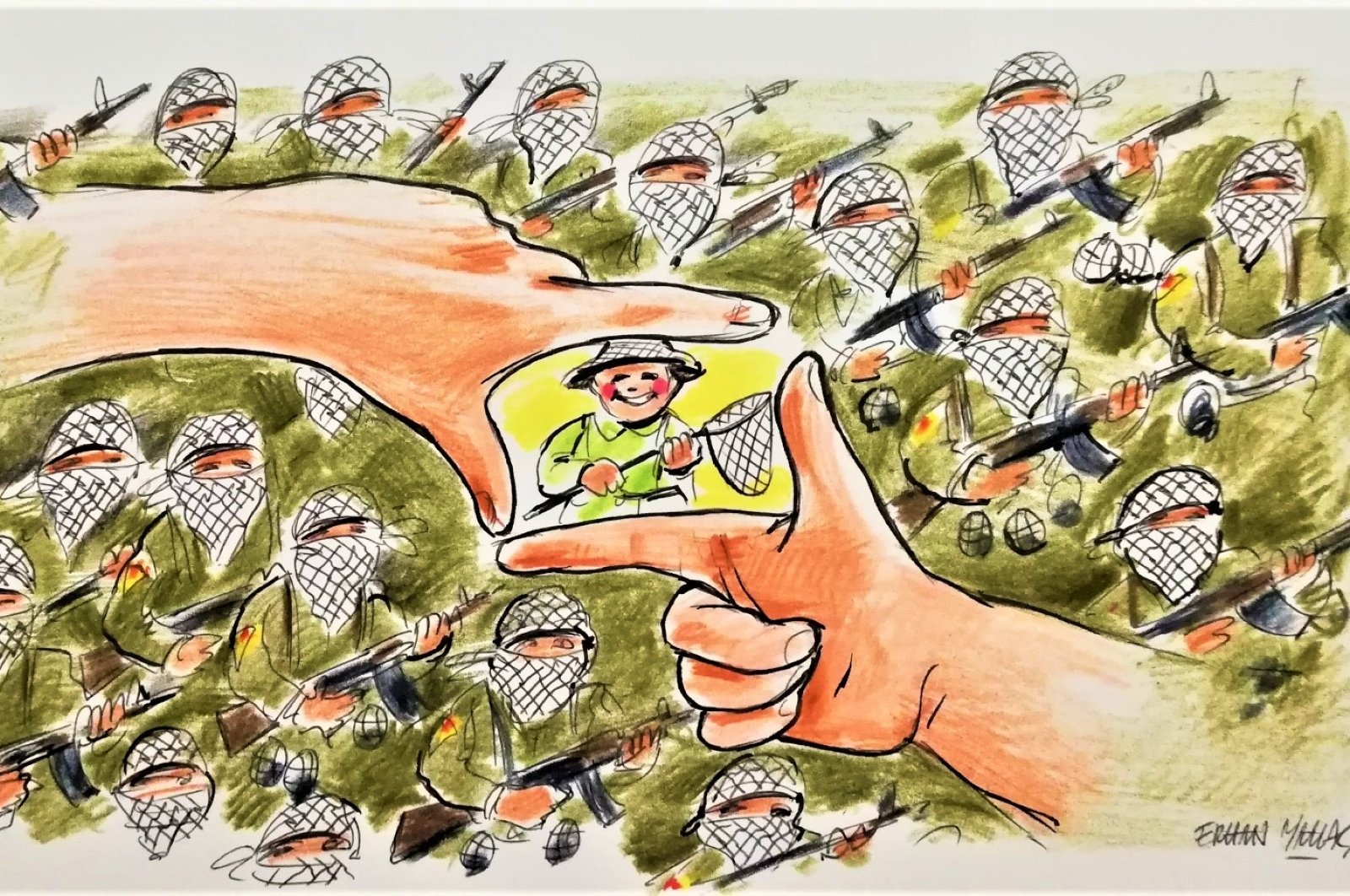 At the end of 2019, Turkey was criticized by the United States and the European Union for its counterterrorism Operation Peace Spring in northern Syria for "eradicating the Kurds." However, time has shown that this is not true. Turkey never fought against Kurds in Syria, Iraq or at home but has resisted the PKK/YPG terrorist elements in the region.

The reason for Turkey's resistance in the anti-terror campaign was directly linked with its national security as the PKK/YPG seeks to establish a terrorist state on Turkey's southern border with a logistically favorable exit to the Eastern Mediterranean to be able to carry out operations against the country.

In the course of the anti-Turkey campaign in 2019, Turkey was demonized by the West and its media. The fact that the U.S. has previously supplied the YPG with several thousand truckloads of weapons, although the PKK/YPG is classified as a terrorist organization in the West, and no one even made it an issue, is a moral destitution in itself.

Also, when Israel fought the Palestinians in their homeland behind the veil of national security for many years, the West took no position on the issue.

However, the Western stance differs when it comes to Turkey whereby Ankara indeed takes lawful measures to preserve its homeland and border security.

For example, Turkey’s Kurdish issue is often compared to that of Spain’s Catalonian issue. When the latter wants to secede, the media often say that separatists are at work and show solidarity with Spain. However, when a terrorist group in Turkey wants to split the country, the West treats this as the democratic right of the "Kurds" and Turkey is admonished to be prudent.

Nevertheless, what many people refuse to comprehend is that Turkey has been fighting the PKK for over 40 years, a terrorist organization that was formed with U.S. support and does not represent the interests of Turkey’s Kurds.

Since the beginning of the reform movement in 2002, the Kurds have enjoyed the same rights as all other ethnic groups, including ethnic Turks. In addition, Kurds in Turkey have more rights than the Turks living in Germany.

Likewise, a Turks-dominated political party in Germany is not entitled to funding from the state budget, whereas the pro-PKK Peoples' Democratic Party (HDP) in Turkey is able to take part in elections and even sits in the Turkish Parliament.

Moreover, it should be underlined that the HDP in no way represents the Kurds in Parliament. There are three active and recent reasons for this:

Those mothers have been waiting for their children for over a year in front of the HDP party building in the city of Diyarbakır, which was once highly terrorized by the PKK.

According to the protesting mothers, the HDP has brainwashed and kidnapped their children and led PKK operations in the country. Also, they claim that the HDP, together with the PKK leaders in Qandil, is robbing the Kurds of their wealth, family, lives and property.

The case of Maide Töremiş

This is also the case for Maide Töremiş, a Kurdish mother from Turkey, living in Berlin, Germany for over 20 years now. Like many mothers of Diyarbakır, she protests against the PKK in front of the German Bundestag.

Töremiş asks the German state for help to win her daughter back. During an interview, she told me that her daughter Nilüfer was brainwashed by the PKK's arm in Germany last year and was then kidnapped.

In tears, she told me about her frustration, despair and disappointment about the fact that no institution or politician has offered her help in Germany.

Töremiş has taught herself how to use social media in order to reach people and will continue to use it until her voice is heard and Nilüfer returns home.

Furthermore, despite all the PKK threats, she is not afraid for her safety or well-being but for the rest of her family, who have also been threatened by the PKK after she began to protest in front of the Bundestag.

The PKK offered Töremiş to see her daughter if she becomes an activist for the PKK. She rejected such a proposal, which further supported her views that the PKK does not represent her interests or those of Turkey’s Kurds, neither in Germany nor in Turkey. On social media, Töremiş is often verbally attacked by PKK members and sympathizers.

During our interview, she further advised me that she recently met with Foreign Minister Mevlüt Çavuşoğlu in Berlin, who promised her an appointment with German Interior Minister Horst Seehofer after his visit.

However, after his departure, Seehofer had told her through his secretary that he could not help her further and refused a personal conversation.

Töremiş's friend, a German journalist, was herself in Syria for a report and had witnessed how Berlin had rescued women and children from Daesh. Töremiş rightly asks why the German state can help families with Daesh but not with the PKK.

Both are classified as terrorist organizations in Europe but are treated differently. According to Töremiş, the PKK hardly differs from Daesh; the main difference is for what purpose Daesh and the PKK kill people.

While Daesh promises an extremist terrorist state, the PKK assures the same. Both groups' alleged agenda to form a state for Muslims or Kurds is just a ploy, she said. The Kurds in Turkey are doing well, the real goal is to weaken Turkey.

Töremiş drew my attention to two points: Firstly, German politicians of Turkish origin would by no means represent the Turks living in Germany in the Bundestag-the same politicians once voted in parliament to recognize the accusation of the so-called Turkish genocide against the Armenians.

Töremiş named Sevim Dağdelen, a member of Parliament in particular. When Töremiş emailed her to seek help, the PKK responded to Töremiş’ email instead of Dağdelen who had shared the email with them without Töremiş's consent.

Secondly, Töremiş concluded by emphasizing that the PKK is trying to portray itself as a peacemaker in the West in order to end its classification as a terrorist organization. If this happens, Töremiş warns, the PKK will not kidnap children by a detour, but by a direct route to Qandil.

Even though the German Focus Online had reported about Töremiş, many news agencies refused to make it a topic despite her request. Nevertheless, the mother in Berlin expects help and support from the German and Turkish states.

Even those who support and believe that the PKK is fighting for the Kurds' rights do not have to make a long journey to Turkey. They can instead always visit Töremiş in front of the German Bundestag and listen to her struggle.

Maybe, following a discussion with her, there will be more understanding about why Turkey was outraged when pictures of the PKK's imprisoned leader Abdullah Öcalan were hanging on EU official buildings in Brussels two years ago and why Turkey is fighting against the PKK/YPG.

What is clear is that the PKK does not represent Kurds but only harms them. It is therefore questionable as to why, for example, the U.S., as a NATO ally of Turkey, supplied thousands of weapons to the YPG, the PKK's Syrian offshoot, and prepared an uprising during Operation Peace Spring in 2019.

Considering the U.S.' greater Middle East plan, this can be quickly interpreted differently from Turkey's point of view. It should not be forgotten that the PKK/YPG also pose a threat to Europe and especially to Germany in the long term as they did in France with the yellow vest movement.

Most notably, some German youths are in the hands of the PKK and in immediate danger which places responsibility on the German state to act. Finally, it should be remembered that former U.S. Secretary of State Hillary Clinton downplayed the ambitions of the YPG through an emotional series that should not be trusted, for the reasons mentioned above.