Cyprus talks must be held between two states alone: Erdoğan 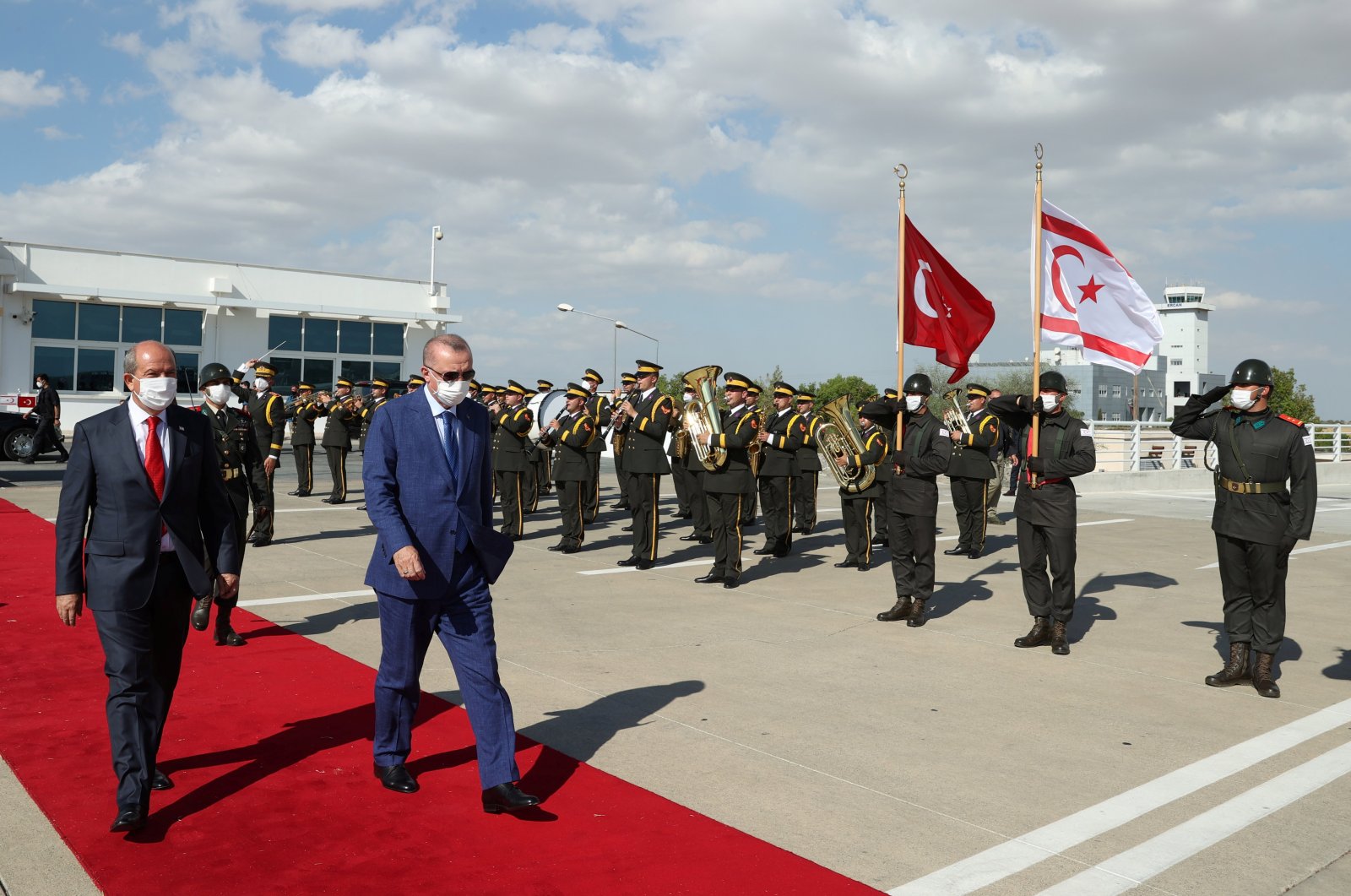 The time has come for the Cyprus talks to be conducted between two states, not two communities, President Recep Tayyip Erdoğan said Wednesday, underlining that the Turkish side is adamant third parties do not intervene in the process.

Addressing Turkish reporters accompanying him on his official visit to the Turkish Republic of Northern Cyprus (TRNC), Erdoğan said: "As the Turkish side, we have opened a new page in our national cause, the Cyprus issue, without changing this constructive understanding. Instead of being stuck with parameters that have been proven not to provide a solution, we present a fair, sustainable and realistic solution vision together with the Turkish Republic of Northern Cyprus."

"(In Cyprus) We pose a challenge, we say to the south, 'We can give you water from here if you want. We call it the Peace Spring. They could not want it," Erdoğan also said.

Erdoğan added that Turkey is the only side that exerts efforts for peace and stability on the island and in the region, noting that neither the Greek Cypriot side nor Greece and the United Kingdom, which are guarantor countries, have demonstrated the same intention.

Touching on the reopening of the ghost town Maraş (Varosha), Erdoğan described it as a peace project in essence.

"All steps are taken transparently on the basis of international law. It is futile that this initiative, which will benefit both peoples on the island, is used as a tool for black propaganda. We will continue to support the Turkish Cypriot authorities on this road that has been set out to eliminate the victims," he said.

Varosha partially opened on Oct. 8, 2020, after remaining a "ghost town" for decades in the wake of Turkey's 1974 peace operation on the island in response to a coup aimed at Cyprus's annexation by Greece. Varosha appeals to both people living in the TRNC and foreign tourists, drawing in thousands of visitors.

Addressing the speculations about Greek Cyprus joining NATO, Erdoğan said it is impossible given Turkey's opposition.

Reflecting on his visit to the TRNC, Erdoğan noted that he held meetings with TRNC President Ersin Tatar, TRNC Prime Minister Ersan Saner as well as other ministers and officials. In these meetings, they discussed the Cyprus issue, developments in the Eastern Mediterranean and steps to improve cooperation and solidarity between the two countries.

"We also held the opening and promotion ceremonies of the projects that reflect the different dimensions of our cooperation. We have implemented the second phase of the Maraş (Varosha) reopening. I would like to congratulate the president of the republic, Mr. Tatar, and the government of the Turkish Republic of Northern Cyprus for their strong stance on the initiative and the decision they took in this context," Erdoğan said.

During his visit to the TRNC, Erdoğan once again underlined that a new negotiation process on Cyprus can only be carried out between the two states.

"If there will be a new negotiation process for the Cyprus issue, it can only be held between two equal and sovereign states," he stated.

Responding to a question about security on Turkey’s eastern border amid migration from Afghanistan and Ankara’s goal to operate Kabul Hamid Karzai International Airport, Erdoğan said every necessary precaution was being taken.

“We have talks ongoing with Pakistan. There is also the issue of the Taliban. We are also in talks of them,” the president said, adding that Turkey’s Foreign Ministry was also in talks with Afghan officials about the recent influx of migrants crossing into Turkish territory.

“We are also asking them to do their part. ‘Please don’t watch the issue from the stands and look after your people,’ we keep telling them,” he said.

“We are in a long and busy campaign but how much we can achieve remains to be seen, because the extent of the crisis is quite big.”

Speaking about Turkey’s foreign policy on Libya, Erdoğan said Ankara’s attitude since day one has been to ensure Libya’s security and sovereignty.

“We are in Libya on an official invitation by the legitimate government which has been recognized by the U.N. We stopped Libya from descending into a lengthy civil war with both our diplomatic and military achievements,” the president said.

“Thus, we have paved the way for a U.N.-led political process in Libya,” he added.

Emphasizing that Turkey will continue to fight for “brotherly Libya’s” peace and stability, Erdoğan explained that it was critical for Libya to remain united in the process as well.

“We are following all developments regarding Libya closely. Other countries need to act in a more sincere manner,” he said.

"Macron wants to get along with me... But on the other hand, a few days pass; here they are taking steps hand in hand with such extensions of the PKK and YPG. Moreover, at the moment, they are together with the United States in the coalition forces. Since they are in coalition forces together with the United States, they are passing from there to Syria, especially from Iraq, with an infiltration movement. By crossing to the Syrian side, they are giving serious support to the terrorists here."

Turkey condemned on Tuesday a meeting between Macron and members of the so-called Syrian Democratic Council, which is under the control of the YPG/PKK terror group.

"We condemn the meeting of French President Emmanuel Macron with the members of the so-called ‘Syria Democratic Council' led by PYD/YPG, the offshoot of PKK terrorist organization in Syria," Foreign Ministry spokesperson Tanju Bilgiç said in a statement.

Bilgiç said the ongoing relationship between France and "this separatist bloody-handed terrorist organization" and its affiliates undermines Turkey's national security as well as efforts to ensure regional stability and preserve the political unity and territorial integrity of Syria.

"We also remind the French and international public opinion the facts that this organization suppressed with violent and bloody methods peaceful demonstrations of youngsters refusing to be recruited, shelled civilian targets such as Afrin hospital, attacked Syrian civilians including children and tortured detainees to death," read a Foreign Ministry statement shared by Bilgiç. "We reiterate once more that Turkey will resolutely continue its fight against this terrorist organization and its affiliates everywhere."

Macron received a Syrian Democratic Council delegation at the Elysee Palace on Monday in Paris.