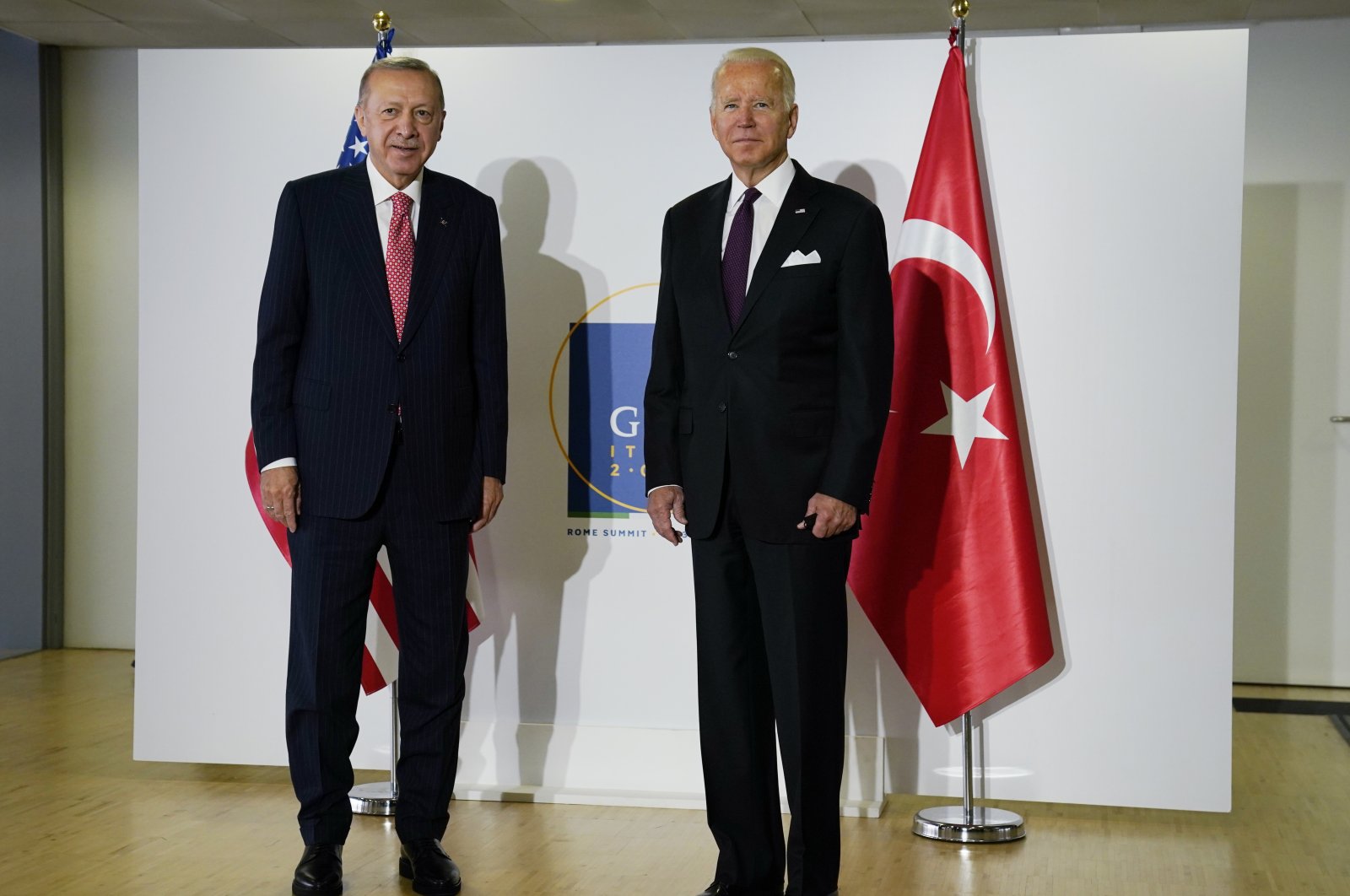 While Ankara described the two leaders' meeting as positive, Washington said that defense partnership and Turkey's importance as a NATO ally were reaffirmed

President Recep Tayyip Erdoğan and United States President Joe Biden met on the sidelines of the G-20 summit in Rome on Sunday and expressed their joint desire to strengthen bilateral relations that have been strained as of late, agreeing to establish a joint mechanism in this direction.

Releasing a statement after the 70-minute meeting, Turkey's Presidential Communications Directorate said the exchange took place in a positive atmosphere and that bilateral relations and regional issues were discussed.

In addition to negotiating steps to be taken by both sides, in line with their shared perspective on increasing the bilateral trade volume per mutually agreed targets, they stressed the importance of the NATO alliance and strategic partnership.

Both presidents expressed their satisfaction with the steps taken by the other regarding climate change.

The White House said that Biden underscored his desire to maintain constructive relations with Turkey during the meeting with Erdoğan.

"President Biden reaffirmed our defense partnership and Turkey's importance as a NATO Ally, but noted U.S. concerns over Turkey’s possession of the Russian S-400 missile system," the White House said in a statement after the meeting.

"He also emphasized the importance of strong democratic institutions, respect for human rights, and the rule of law for peace and prosperity," it said.

The White House statement said Biden and Erdoğan also discussed the political process in Syria, humanitarian assistance for Afghans, elections in Libya, the situation in the Eastern Mediterranean, and diplomatic efforts in the South Caucasus.

“We’re planning to have a good conversation,” Biden said in response to a question on Turkey's possible purchase of F-16 jets from the United States as the two leaders stood together before their meeting in Rome.

The leaders were expected to discuss bilateral relations and regional matters, including Syria, Libya and Afghanistan along with other issues related to Turkey's request for clarity in the ongoing F-35 fighter jet dispute. Erdoğan and Biden are also expected to attend the world leaders' summit at the start of the U.N. climate summit, known as COP26, which starts on Sunday in the Scottish city of Glasgow.

The United States is discussing ways for Turkey to buy F-16 fighters after a deal for more advanced F-35s was scrapped due to Ankara’s purchase of a Russian missile system, officials said recently.

Erdoğan said on Oct. 17 that Ankara wants to buy the cheaper F-16s using the $1.4 billion (TL 13.45 billion) it allotted for the F-35 fighter jet program. Erdoğan has said Washington offered Ankara a package of F-16 jets and modernization kits in exchange for the payment.

Tensions also flared between the two NATO allies recently after an ambassadorial crisis. Erdoğan at an Oct. 23 rally said that 10 foreign ambassadors who called for the release of a jailed businessperson should be declared persona non grata. The envoys, including the U.S., French and German representatives, had previously issued a statement seeking to resolve the case of Osman Kavala, a businessperson held in prison since 2017 despite not having been convicted of a crime.

Turkey’s Foreign Ministry summoned the ambassadors of these countries, accusing them of meddling in the Turkish judiciary.

Erdoğan said he ordered the Foreign Ministry to designate the ambassadors as persona non grata in response, prompting several embassies and the U.S. to issue another statement later in which they committed to complying with Article 41 of the Vienna Convention.

The ambassadors retreated from their position slandering the Turkish judiciary and Turkey with the new statement, said Erdoğan after a Cabinet meeting.

“We believe that these ambassadors, who expressed their commitment to Article 41 of the Vienna Convention, that is, the commitment to abide by the laws and regulations of countries and not interfering in internal affairs, will now be more careful in their statements on Turkey’s sovereign rights,” said Erdoğan.

He said anyone who does not respect the independence of Turkey and its sensitivities cannot stay in Turkey “regardless of their positions.”

“I cannot honestly say that there is a healthy process in Turkish-American relations,” Erdoğan also said in September.

The two leaders did not meet for bilateral talks on the sidelines of the U.N. General Assembly. Since Biden became president, they had met only in June at a NATO summit where they discussed the possibility of Turkey securing and operating the Hamid Karzai International Airport in Kabul. But those plans evaporated as the Taliban swiftly took control of Afghanistan amid the U.S. military departure.

Foreign Minister Mevlüt Çavuşoğlu said Thursday during an interview that the offer to meet came from the U.S. side.

"If the U.S. does not want to resolve the issue about F-35s, or if the U.S. Congress blocks it, Turkey will consider other options, including purchasing (Russian-made) SU-35s or SU-57s," Çavuşoğlu said.

The Turkish president has said he's open to buying a second Russian missile system, despite the controversy generated by his 2017 deal to acquire the Russian-made S-400 system.

In a September interview with CBS News, Erdoğan said that Turkey wasn’t given the option to buy American-made Patriot missiles. He also said the U.S. hadn’t delivered F-35 stealth jets despite a payment of $1.4 billion.

In 2002, Turkey joined several other NATO allies who agreed to buy the F-35, and five years later reached a deal to participate in its production, an agreement worth potentially billions of dollars to Turkish industry.

As it was preparing to receive the first two of 100 aircrafts planned for its air force, Ankara in 2017 announced it was buying an S-400 battery.

One week after the Turkish Ministry of Defense received the first delivery of S-400 components in July 2019, Washington announced the cancellation of Turkey’s F-35 program.

Washington argued that the S-400 could be used by Russia to covertly obtain classified details on the F-35 jets and that they are incompatible with NATO systems. Turkey, however, insisted that the system would not be integrated into NATO systems and would not pose a threat to the alliance.

Five months later, Washington imposed sanctions on Turkey’s Presidency of Defense Industries (SSB), which is in charge of defense technology imports, its chief Ismail Demir and three other employees.

There are additional sources of strain for the two countries, including the U.S. support for PKK terrorist group's Syrian branch, the YPG, whom Turkey considers terrorists; and the continued U.S. residency of Gülenist Terror Group (FETÖ) figures including its head Fethullah Gülen, who plotted the failed coup attempt against the Turkish government in 2016.