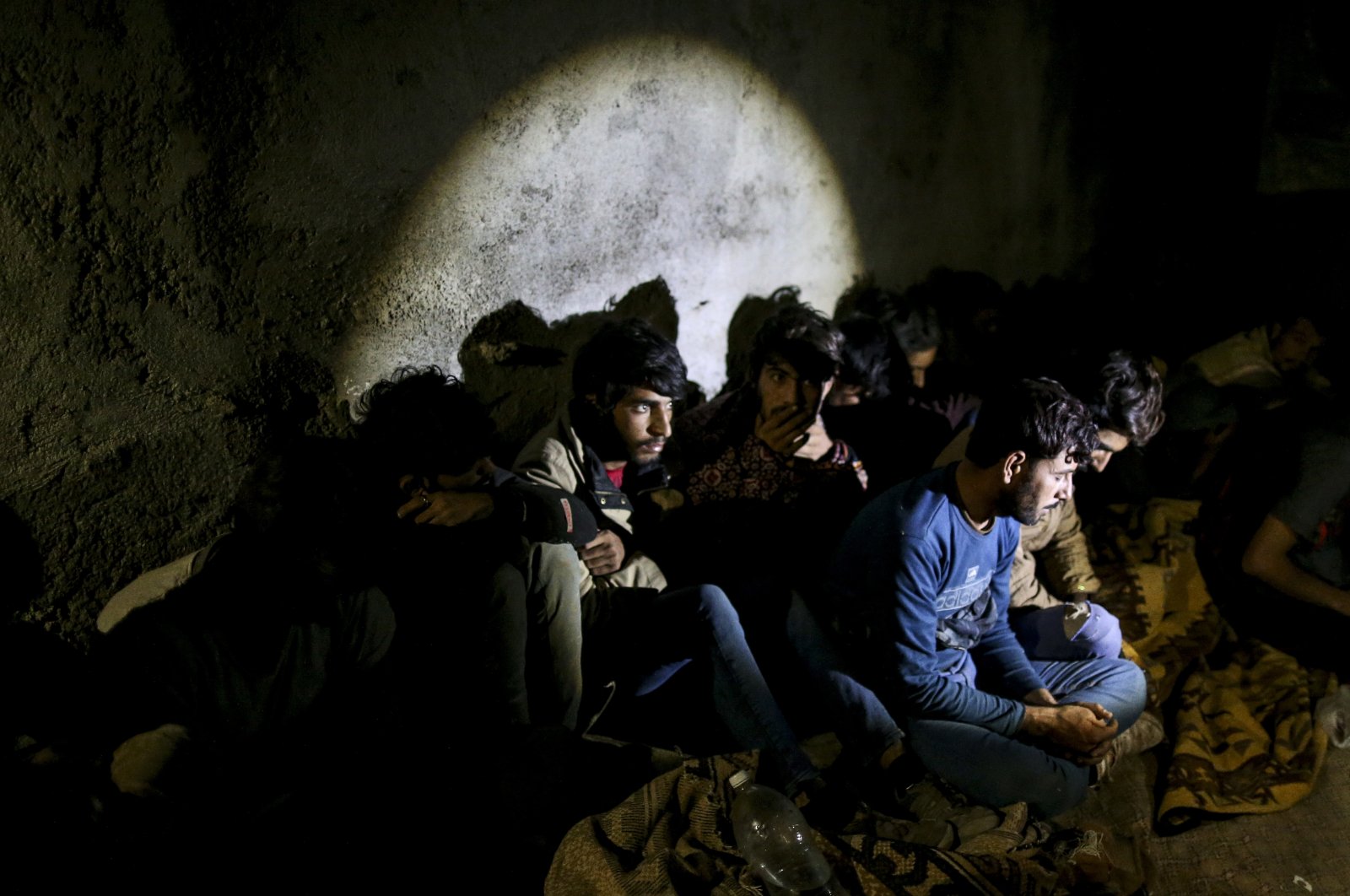 Turkish security forces apprehend a group of irregular migrants in an operation aimed at stemming the recent influx of migration, mainly coming from Afghanistan and stopping human trafficking operations in the area at the border province of Van, eastern Turkey, Aug. 21, 2021. (AP Photo)
by DAILY SABAH
Oct 12, 2021 5:29 pm

Speaking to BBC Turkish, Pope stated that the current situation in Syria is not suitable for the mass return of refugees. Regarding the migration from Afghanistan to Turkey in recent months, she also said that there has not been a large migration wave yet.

Pope visited Turkey after taking office. Prior to her duty at the U.N., Pope took part in the U.S. National Security Council during the Barack Obama era and served as the chief migration advisor to the current U.S. President Joe Biden. She held various meetings in the capital Ankara and southeastern border province Gaziantep during the visit.

In the past months, in parallel with the withdrawal of international forces from Afghanistan, the Taliban's take over of one province after another and then their seizure of power brought up the possibility of a large migration wave from Afghanistan to other countries in the region.

Asked about the latest situation regarding migration from Afghanistan, Pope stated that there was no big wave of immigration abroad: “Current findings show that most Afghans remain in their country for now. However, there are serious issues that need to be addressed urgently to avoid a future humanitarian disaster. This situation will be exacerbated as we enter winter. We cannot turn our backs on Afghanistan. We must all work together to ensure that at least the basic needs of Afghans are met."

Pope stated that in the absence of investment, the country risks economic collapse and worsening socioeconomic and security conditions. "The effects of this will not be limited to Afghanistan. As the international community, we must acknowledge and address the possibility of further internal displacement and greater population movements," she added.

The political developments in Afghanistan also concern Turkey which has been a key transit point for asylum-seekers who want to cross into Europe to start new lives. The possibility that the eastern borders of the country might encounter a much larger irregular migration movement came to the fore.

Pope stated that Turkey has not faced a large migration wave in recent months: “Afghans are traditionally a mobile people. This is nothing new. Turkey has been a common destination for Afghans, especially in the last 30 years since the Soviet occupation."

"Conflicts and other migration factors have periodically caused Afghans to leave their country. However, there has been no major influx in recent months. The displacement has so far occurred inside Afghanistan. But we do not know what the future will hold. Therefore, governments have to respond to the most pressing humanitarian challenges. and we need to work with the international community."

Turkish President Recep Tayyip Erdoğan on Tuesday proposed the creation of a working group on Afghanistan under the G-20, noting that Turkey is ready to lead the working group.

"Ensuring security and stability in Afghanistan as soon as possible is of critical importance not only at the regional but also at the international level," Erdoğan said, speaking at the G-20 extraordinary meeting on Afghanistan, joining via videoconference from Vahdettin Mansion in Istanbul.

He underlined that regardless of the political process, there is a need to show strong solidarity with the Afghan people due to the deepening humanitarian crisis in the country.

"The international community does not have the luxury of turning its back on the Afghan people and leaving this country to its own fate," he added.

Erdoğan stressed that Turkey will continue to fulfill its "duty of brotherhood" for the Afghan people in these difficult days.

The president also said the international community should keep the channels of dialogue with the Taliban open in order to “patiently and gradually steer” it toward establishing a more inclusive administration, adding: "We have not seen necessary inclusiveness from them on the issue of humanitarian assistance, security and prevention of Afghanistan being a base of terror organizations and prevention of extremism."

He repeated that Turkey, which already hosts more than 3.6 million Syrians, cannot shoulder the burden of an influx of migrants from Afghanistan, warning that European nations would also be affected by a new wave of migrants.

“It is inevitable that European countries will also be affected by the migration pressure that Turkey will be exposed to on its southern and eastern borders,” he said.

His remarks came as Afghanistan faces an economic and humanitarian crisis in the wake of the Taliban's takeover in mid-August. The Taliban captured Kabul on Aug. 15, forcing the president and other top officials to leave the country. They have formed an interim government headed by Mullah Mohammad Hasan Akhund. World powers have called on the group to form an inclusive government that is representative of the country's ethnic diversity.

Foreign Minister Mevlüt Çavuşoğlu said in September that Turkey has been working with the United Nations High Commissioner for Refugees (UNHCR) on the possible return of refugees, especially Syrians, to their countries. Pope said that the conditions in the country are not suitable for this.

"Turkey has shown the rest of the world what it means to be in solidarity with people who are less fortunate in life. No one can ignore the fact that Turkey provides safety and security to millions of people in urgent need and welcomes them as guests. Turkey has recruited many adults into the workforce, sent children to school, provided health services to patients and provided an opportunity to adapt to those who came to the country as foreigners," she said.

"The situation in Syria is not yet conducive to the mass return of refugees. So even while we in the international community face other humanitarian issues, we must greatly step up our efforts to help Turkey so that it can cope with the disproportionate burden it has so skillfully carried over the past 10 years," she added.

Government officials in Turkey criticize Western countries for looking at the migration issue from a security perspective and trying to keep migrants at Europe's doorstep.

“Few countries in the world have felt the impact of the Syrian crisis as much as Turkey. The Turkish government has taken creative measures to respond to the magnitude of the migrant crisis, adopting new laws and policies to better manage migration and provide protection to migrants. Other countries can learn from Turkey's approach a lot," Pope said.

She also stated that they have been coordinating and cooperating on various projects with the Turkish government to prevent irregular migration.

Turkey stands as one of the world's top refugee-hosting countries with its refugee population of 4 million, including more than 3.6 million Syrians who fled the country following the eruption of a bloody civil war in 2011.

Erdoğan late Monday said it is not possible for Turkey to shoulder the entire burden of the migration crisis all by itself, and expects refugees' target countries to take more responsibility.

In the past five years, about 2.35 million irregular migrants have attempted to enter Turkish territories, the president said. He added that more than 1.3 million were held within Turkey, some of them voluntarily left whereas about 286,000 were deported.

"The goal of almost all of these migrants was not to ‘stay in Turkey' but cross into Europe, or even other locations, we should underline that," Erdoğan said.

"With its comprehensive and efficient border security and migration policy, Turkey has thwarted a migration influx Europe would not be able to overcome," he said.

While Turkey can sort its migration issue through security and voluntary departures and integration via social and economic programs, the target countries should also focus on their share of the burden, the president asserted.