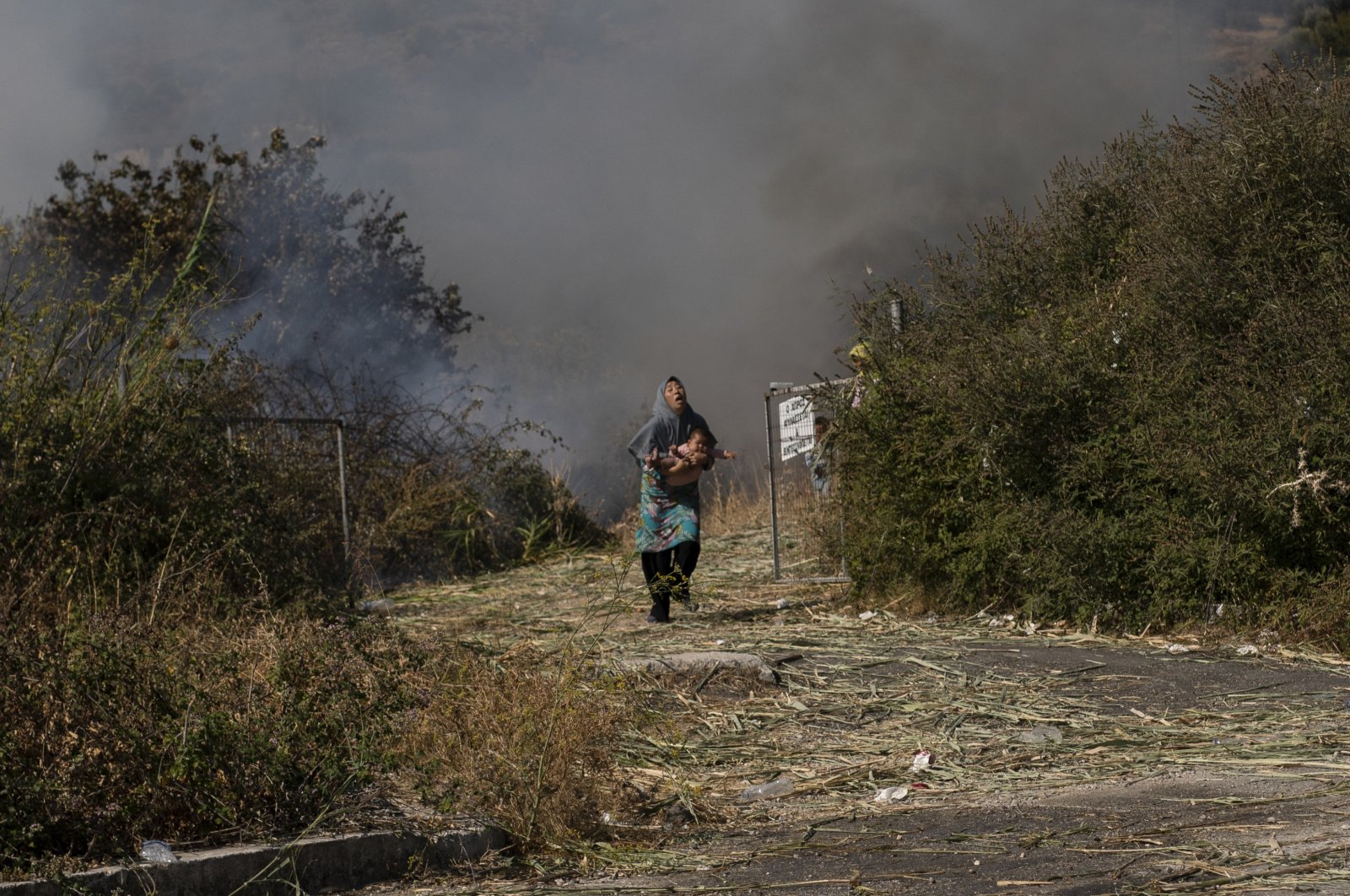 An Afghan woman from the destroyed Moria camp holds her baby as she runs to avoid a small fire in a field near where refugees and migrants are sheltered, in Lesbos island, Greece, Sept. 12, 2020. (AP Photo)
by DAILY SABAH Sep 20, 2021 10:48 am
RECOMMENDED

A possible migrant influx due to the recent situation in Afghanistan is a problem that passes beyond the borders of Turkey and concerns Europe and the West, experts said.

Fabio L. Grassi, a history professor at Sapienza University, told Anadolu Agency (AA) that there may be a mass refugee influx due to the situation in Afghanistan.

"This is an issue that goes beyond Turkey's borders and concerns Europe and the West a lot. Once again, Turkey has a very sensitive role and a duty in its magnificent and troubled geography," Grassi said.

He said Europe should take more responsibility at this point.

Regarding the U.S. invasion in Afghanistan, the professor said: "The results of this occupation are clear: There was a great failure, a great disaster. For this, of course, the U.S., Europe and the West should bear responsibility."

The Taliban took over Afghanistan in mid-August and have announced a 33-member interim government.

Noting that Anatolia is like a pool that embraces all kinds of people, Grassi said: "This is the destiny of Anatolia. For this reason, it became the cradle of civilizations."

Sadullah Gülten, a history professor at Turkey's Ordu University, said that people see Turkey as strong enough to embrace them all. Gülten urged historians and sociologists to focus more on the migration issue.

President Recep Tayyip Erdoğan on Sunday highlighted that Turkey is the country that bears the greatest burden of the migrant crisis, calling on Western countries to take more responsibility for the issue.

Greek Prime Minister Kyriakos Mitsotakis said Friday that Turkey was an important partner in tackling any new migration challenge to Europe and needed support, adding that Europe itself has not delivered on a common policy in addressing the migrant issue.

"We need to see steps being taken by those around us. If we do not see them, we will make the necessary decision and act accordingly," Erdoğan said in response to Mitsotakis’ remarks. “Turkey is nobody’s doorman on this,” he added, echoing earlier comments that Turkey cannot be expected to take in a new wave of migrants. Turkey was abandoned in its efforts to prevent irregular migration, Erdoğan said recently.

Concerns have risen over a possible spike in migrants from Afghanistan, due to the U.S.’ pullout from the country and the following surge of Taliban attacks. Turkey has made it clear that it will not bear the burden of the migration crises experienced as a result of the decisions of third countries.

Turkey is continuing efforts to bolster the security of its border with Iran to prevent any new migrant wave in the face of the recent developments in Afghanistan. The beefed-up border measures in Turkey, which already hosts nearly 4 million Syrian refugees and is a staging post for many migrants trying to reach Europe, began as the Taliban started advancing in Afghanistan and took over Kabul last month. Turkey is not the only country putting up barriers. Its neighbor Greece has just completed a 40-kilometer (25-mile) fence and surveillance system to keep out migrants who still manage to enter Turkey and try to reach the EU.

Authorities say there are 182,000 registered Afghan migrants in Turkey and up to an estimated 120,000 unregistered ones. Erdoğan urged European countries to take responsibility for any new influx, warning that Turkey had no intention of becoming “Europe’s migrant storage unit.”