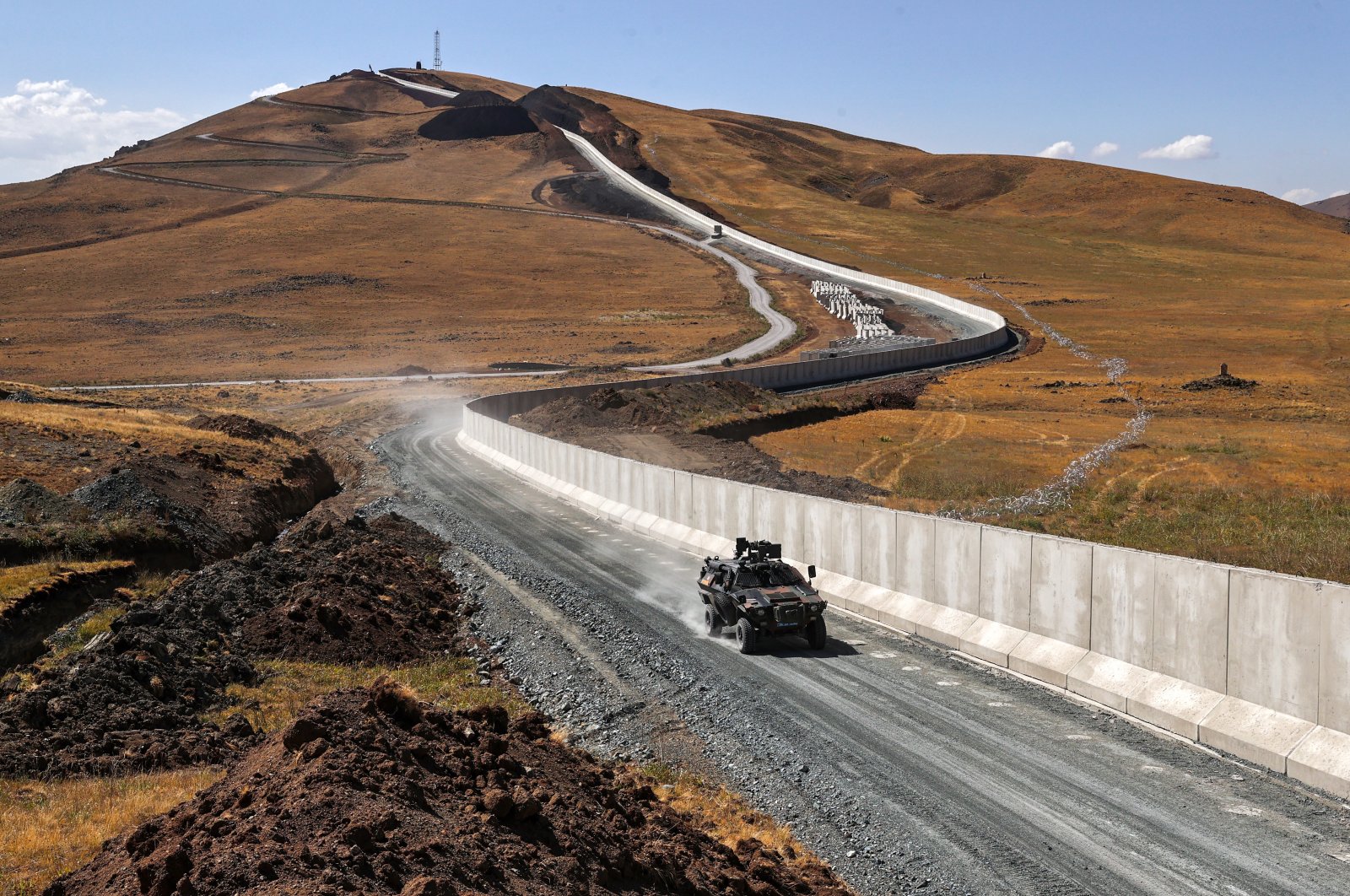 Turkish security forces are hard at work tightening measures to ensure the security of the country's eastern border with Iran to prevent illegal migration, smuggling and the infiltration of terrorist elements.

A modular wall, observation posts and trenches are being set up close to the 295-kilometer (183-mile) borderline with the neighboring country to prevent illegal activities.

The teams, which completed the first 5-kilometer section of the modular wall, were deployed to prevent irregular migrants from entering Turkey through Iran along the border.

Special Mine Search and Clearance Battalion Command teams affiliated with the Ankara Gendarmerie Engineering Command that came to the region are also clearing mines along the border to ensure construction and trench digging continue safely.

Then, 3-meter by 2.8-meter (9.8-foot by 9.1-foot) concrete blocks weighing 7 tons produced by contractor companies in concrete batching plants will be laid along the border. The ground has been prepared beforehand with construction equipment.

In order to completely cut off the border crossings, 110 kilometers of trenches, with a depth and width of 4 meters, have been dug and barbed wire has been installed at exit points.

Nine battalions of the 6th Border Brigade Command and soldiers serving in 44 police stations are struggling to keep the region along the Iranian border secure through patrols and surveillance activities.

To bolster the measures in the region, two reconnaissance and two commando companies from the Land Forces Command, three companies and a battalion from the Gendarmerie General Command and 750 special operations police officers, consisting of 35 teams from the General Directorate of Security, were sent to the region with armored vehicles.

Security forces work tirelessly in regions, which security guards are assigned to monitor, keeping the Van-Iran border under control 24 hours a day, seven days a week, using all technological means at their disposal.

The units coordinate to evaluate even the smallest details and monitor the region using planes, drones and helicopters, working hard to prevent unwanted migration through their successful operations.

In order to ensure the security of the border, the security forces prevented 69,156 irregular migrants from crossing this year and detained 904 human traffickers who organized the illegal crossings.

Turkey is not a pit stop for migrants, President Recep Tayyip Erdoğan said late Wednesday and added that the country is taking the necessary steps to avert an irregular migration crisis due to the situation in Afghanistan.

In a live interview with private broadcasters CNN Turk and Kanal D, Erdoğan underlined that Turkey is not a stop on a journey, adding that considering all matters, “we will take steps accordingly.”

The Turkish president also denied that there was an influx of irregular migrants crossing Turkey's borders, as is currently being "exaggerated on social media."

Referring to irregular migrants from Afghanistan, Erdoğan also said in the interview that Turkey is building walls along its borders with both Iran and Iraq.

"The walls being built there are to prevent these irregular migrants from entering our country," he underlined.

Concerns have risen over a possible spike in migrants from Afghanistan due to the United States' pullout from the country after two decades and the following surge of Taliban attacks.

The Taliban have rapidly captured several smaller administrative districts and are now targeting towns and cities. They have captured nine provincial capitals from government forces in six days.

As recently announced, to ensure the safety and security of the Turkish-Iranian border, a 295-kilometer wall will be constructed along the entire shared border. It is hoped that the wall will help prevent illegal crossings, the trafficking of contraband and that it will also hinder terrorists from infiltrating the country.

Turkey hosts nearly 4 million refugees – more than any country in the world. After the Syrian civil war broke out in 2011, Turkey adopted an "open-door policy" for people fleeing the conflict, granting them "temporary protection" status.