Israel must be held accountable for its crimes: FM Çavuşoğlu 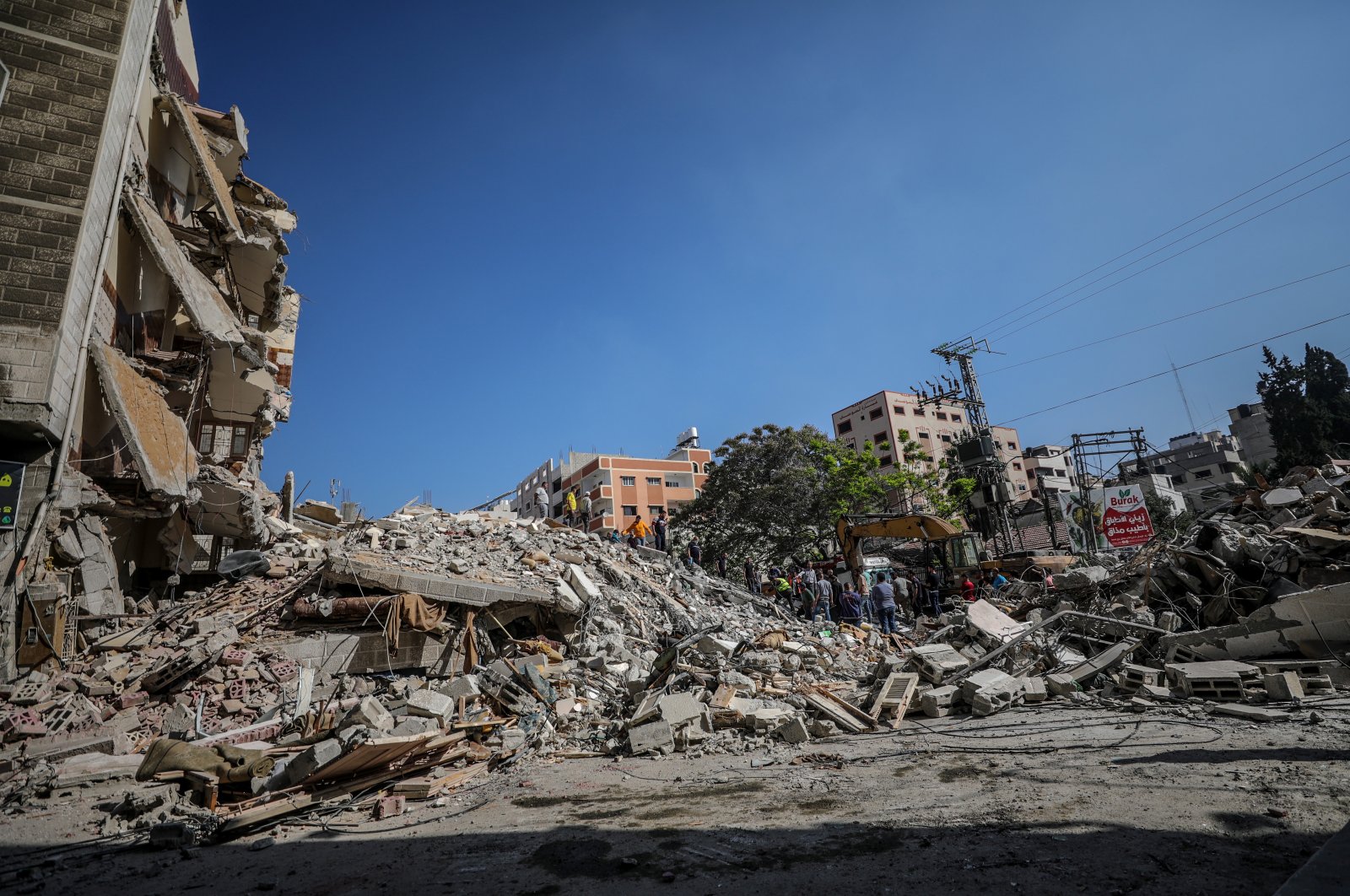 Palestinian civil defense men search for people in the rubble of a destroyed house after an Israeli airstrike in Gaza, Palestine, 16 May 2021. (EPA Photo)
by DAILY SABAH May 16, 2021 1:37 pm

Underlining Israel's responsibility for the ongoing crisis, the Turkish top diplomat said it is time for unity and determination against Israeli violence

Israel is the only party responsible for the ongoing tensions with the Palestinians and the humanitarian crisis in the region and must be held accountable for its crimes, Turkey's Foreign Minister Mevlüt Çavuşoğlu said Sunday during his address to the emergency meeting of the Organisation of Islamic Cooperation (OIC), underlining that it is time to show solidarity, unity and determination.

Sources from the Turkish Foreign Ministry said that the meeting to discuss Israeli attacks on Palestinian people and territories was the initiative of Turkey and OIC term chair Saudi Arabia. In the meeting, steps that the OIC and international community can take against Israel's violence were discussed.

Addressing the virtual meeting via video link, Çavuşoğlu said that Israel is responsible for the escalation of tensions in East Jerusalem, the West Bank and Gaza, explaining that the restrictions on Muslim prayers at Al-Aqsa Mosque and forceful displacement of Palestinians from their homes have triggered the ongoing situation.

Underlining that the tragedy was caused as a result of Israel not heeding warnings, Çavuşoğlu said: "This is a part of Israel's systematic campaign of ethnic, religious and cultural cleansing."

The Turkish top diplomat noted the high rate at which Israelis have been illegally settling on Palestinian land and the escalated levels of destruction to the Palestinian people's property, underlining that if this trend cannot be reversed, a two-state solution will be unachievable.

Çavuşoğlu also criticized the United Nations Security Council (UNSC) for its failure to condemn Israel, highlighting that the council failed to even publish a press release on the issue due to the United States rejecting the move.

He announced his participation in the upcoming U.N. General Assembly meeting on the issue and said that everyone should exert efforts to protect the Palestinian people.

Çavuşoğlu also underlined the responsibility of UNESCO and the Human Rights Council (HRC) and proposed the HRC establish a fact-finding commission to investigate international law violations on Palestinian lands.

The death toll from the Israeli attacks on the blockaded Gaza Strip rose to 181, including 31 women and 52 children, on Sunday. Despite international outrage over its deadly raids, Israel continued its attacks on Gaza overnight Saturday into Sunday. In a statement, the Palestinian Health Ministry in Gaza said 26 Palestinians, including 10 women and eight children, lost their lives in attacks carried out by Israel since midnight. The number of injured has reached 1,225.

Tensions spread from East Jerusalem to Gaza after Palestinian resistance groups there vowed to retaliate against recent Israeli assaults on Al-Aqsa Mosque and the Sheikh Jarrah neighborhood if they were not halted. Israel occupied East Jerusalem, where Al-Aqsa is located, during the 1967 Arab-Israeli war. It annexed the entire city in 1980 in a move never recognized by the international community.

Çavuşoğlu noted that he and President Recep Tayyip Erdoğan have intensified diplomatic contacts on the issue and added that the civil community must be mobilized for this aim.

Israel has started to target the press and half of those who lost their lives in Gaza are women and children, Çavuşoğlu said, adding: "We cannot only make statements and declarations. We need to do more than that. The international community is obliged to protect the Palestinian civilians. In this context, the OIC's responsibility is big too. We need to spend efforts for the establishment of an international protection mechanism to protect Palestinian civilians, in line with the United Nations General Assembly's 2018 decision."

Countries can volunteer financial and military support to create this mechanism, he said.

He also stated that Israel must be held accountable for its war crimes and crimes against humanity, underlining the special role of the International Criminal Court (ICC) in The Hague.

"It is time to show unity and determination. The Ummah expects leadership from us. Turkey is ready to take every necessary step," Çavuşoğlu added.

“There are a few who have lost their moral compass and voiced support for Israel,” he said. “If there are half-hearted statements within our own family, how could we criticize others who (don't) take our words seriously?"