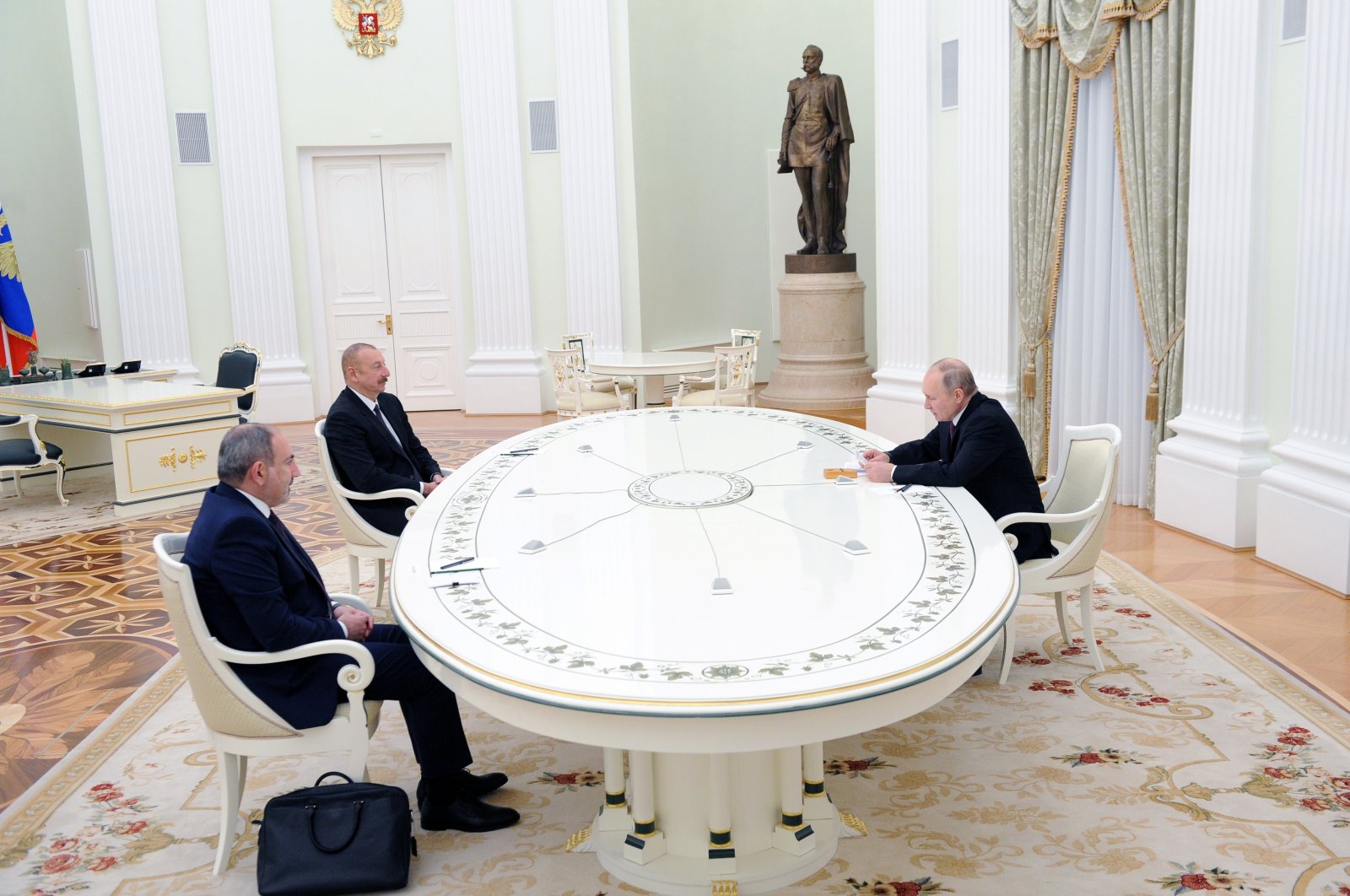 Russia's President Vladimir Putin meets with Azerbaijan's President Ilham Aliyev and Armenia's Prime Minister Nikol Pashinian to discuss the implementation of the cease-fire over Nagorno-Karabakh reached on Nov. 9 and measures to solve problems in the region, in Moscow, Russia, Jan. 11, 2021. (Reuters Photo)
by Daily Sabah with AA Feb 22, 2021 11:43 am
RECOMMENDED

The liberation of Nagorno-Karabakh from the Armenian occupation has provided a greater chance for cooperation, peace and development in the region, an Azerbaijani expert said Monday.

Vugar Bayramov, the chairperson of the Baku-based Center for Economic and Social Development (CESD), said President Recep Tayyip Erdoğan's proposal to form a six-country regional cooperation platform with Turkey, Russia, Iran, Azerbaijan, Georgia and Armenia would prove beneficial in this regard. Erdoğan said that if Armenia joins this process and takes positive steps, it will open a new page in Turkey-Armenia relations.

"Trilateral negotiations between Russia, Azerbaijan and Armenia are going on, and a working group has also been established," Bayramov told Anadolu Agency (AA) on the sidelines of a two-day conference in Istanbul. "In their first meeting held recently in Moscow, they discussed a corridor from mainland Azerbaijan to Nakhchivan."

The Azerbaijani expert said: "Russia, Azerbaijan and Armenia have discussed opening up transportation and logistics and connectivity with Nakhchivan, which could result in more non-oil exports from Azerbaijan."

Ankara supported Baku throughout the 44-day-long battle, which ended on Nov. 10 with a Moscow-brokered cease-fire.

The opening of a transit corridor connecting Azerbaijan with its Nakhchivan enclave provides new opportunities for the region and gives Turkey direct access to the Caspian Sea.

Bayramov said the corridor would allow more exports from the Turkish side "as it will provide a chance to Turkish companies to export directly into Central Asian, and Asian markets."

The creation of the southern corridor was part of the cease-fire deal which saw the return to Azerbaijan of a significant part of Nagorno-Karabakh and also required Armenia to hand over all of the areas it had occupied outside Nagorno-Karabakh.

According to the ninth article of the agreement, Armenia will guarantee transport through the country from Azerbaijan to Nakhchivan, and the construction of transport communications will be provided.

The presidents of Turkey and Russia recently discussed regional matters, including Karabakh, in a telephone call.

Erdoğan suggested to Vladimir Putin that experts from the two countries and Azerbaijan could hold talks on how to more efficiently reestablish roads and rail transportation lines in Nagorno-Karabakh under an agreement signed on Jan. 11.

"We believe that the post-war period will make all countries better," said Bayramov, who heads the CESD.

Azerbaijani cooperation agreements with Turkmenistan and Kazakhstan, he added, make transportation and cargo supplies "easier" through the Caspian Sea.

"This is for Central Asia. A new corridor. A new opportunity to export efficiently to Turkic markets, and also to have direct access to European markets," he said. "It is also a step toward Turkic integration."

Azerbaijan is not a part of the central Asian region but is ethnically Turkic and enjoys strong ties with Turkey.

On trilateral cooperation between Azerbaijan, Turkey and Pakistan, Bayramov said joint projects would pave the way for further collaboration.

Turkish companies are investing in Nagorno-Karabakh, and "we also expect Pakistani companies to engage in resurrection stage of the liberated territories," he added.

He said for Azerbaijan, Turkey is the second major trade partner after Italy and the top trading partner in non-oil exports and imports.

"Economic relations between Pakistan and Azerbaijan have also been increasing in the last couple of years, and we expect more trade turnover in the future. Such cooperation will result in more joint projects and a rise in imports and exports."

"Cooperation between these countries is strategic in nature," Bayramov said. "This cooperation is important to promote regional peace."

Turkey and Pakistan have the potential to improve economic relations, "but there is a need to do a lot of work," said Salman Shah, an adviser on financial affairs to the chief minister of Pakistan's Punjab province.

The bilateral trade volume between Turkey and Pakistan is around $800 million (TL 5.6 billion), and the two countries are working to increase it.

Asghar Zaidi, the vice-chancellor of the Government College University Lahore, said Pakistan, Turkey and Azerbaijan have "great prospects" of partnership in higher education.

"We have a bulge of the youth population, and it will benefit all three countries if we could form a union of universities that can lead to better education, research and investment in science and technology," Zaidi told Anadolu Agency (AA). "It is high time that the universities come together."