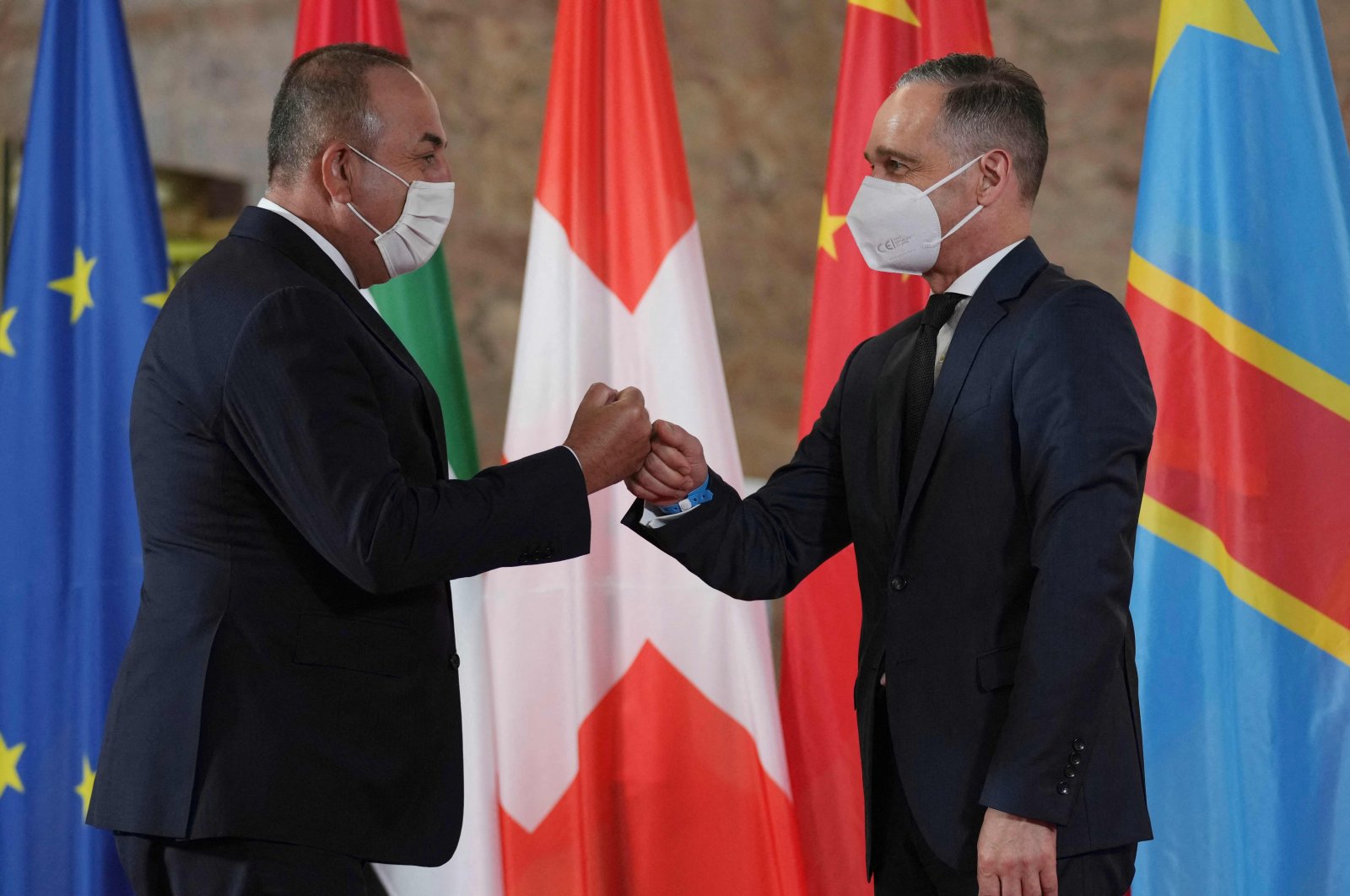 As world powers on Wednesday met in Berlin to seek lasting peace in Libya by ensuring the conflict-torn North African country stays firmly on the path toward general elections on Dec. 24, Turkey is represented by Foreign Minister Mevlüt Çavuşoğlu under the motto of "Libya belongs to Libyans."

The efforts to end a decadelong spiral of violence in Libya are the focus of the second round of talks being held in Berlin after the first was attended by the presidents of Turkey, Russia and France in January 2020 before the pandemic.

Turkish diplomatic sources stated that Turkey is expected to defend the principle of Libya belongs to Libyans and demand the withdrawal of Russian mercenaries sponsored by the Wagner Group, who fought for illegitimate forces loyal to eastern-based putschist Gen. Khalifa Haftar during their offensive against the legitimate U.N.-recognized Government of Nation Accord (GNA) and its capital, Tripoli, during the country's recent conflict.

The GNA had turned the tide against Haftar's forces thanks to the military support provided by Turkey, while Haftar was backed by France, Egypt and the United Arab Emirates (UAE).

Turkish officials advocate the idea that every element disturbing stability in the country, especially the Wagner mercenaries, should be removed.

Turkey provides training to over 1,000 Libyan soldiers and police personnel in five training centers with the aim of establishing the regular army in Libya and bringing its units up to international standards.

Ankara, which has been striving for Libya's territorial integrity, a sustainable cease-fire, lasting peace and stability since the beginning of the process, emphasizes the necessity of taking the appropriate steps to prevent unlawful practices in the region.

Çavuşoğlu also met with his German counterpart and Libyan prime minister ahead of the second Berlin Conference on Libya.

"We discussed Libya, our EU relations in the context of immigration and customs union and tourism issues with German Foreign Minister Heiko Maas," Çavuşoğlu wrote on Twitter.

Separately, he also met with Libya's Prime Minister Abdul Hamid Dbeibah, according to a statement from the Libyan Prime Ministry's press office.

The two discussed coordinating political positions to be put forward at the Berlin Conference, the statement added.

Ahead of the conference, German Foreign Minister Heiko Maas noted that much has been achieved in the past two years. An October cease-fire agreement that included a demand that all foreign fighters and mercenaries leave Libya within 90 days led to a deal on elections that are due to be held on Dec. 24, 2021, and a transitional government that took office in February.

But “many challenges still lie ahead of us,” said Maas, who met Libya's transitional prime minister and foreign minister on Tuesday evening. “For the further stabilization of the country, it is crucial that elections take place as planned and that foreign fighters and mercenaries really do leave Libya.”

He added that Wednesday's conference launches a new phase “in which we no longer only talk about Libya, but in which we are now speaking with Libyan men and women about the future of their country.”

Maas reminded participants of pledges made in 2020 for an end to international meddling and for foreign militants or troops to withdraw.

"For the further stabilization of the country, it is crucial that elections take place as planned and that foreign fighters and mercenaries really do leave Libya," Maas said ahead of the gathering.

"It is our aim to support the Libyan transitional government so that it can take the fate of the country into its own hands."

The United Nations has estimated that 20,000 foreign fighters and mercenaries are still on Libya's territory. And that presence is seen as a threat to the U.N.-backed transition leading to the elections.

The oil-rich country descended into chaos after dictator Moammar Gadhafi was toppled and killed in a 2011 NATO-backed uprising, resulting in multiple forces vying for power. In recent years Libya has been split between two rival administrations backed by foreign forces and countless militias.

In October, after Turkey-backed forces of the GNA based in Tripoli routed out those of eastern military strongman Haftar, the two camps agreed on a cease-fire in Geneva. The security situation in Libya has been slowly improving since then.

However, the U.N. recently warned that progress has stalled, notably on a key requisite of the polls – the pullout of all foreign soldiers. Western leaders have repeatedly called on the foreign fighters to depart. But Russian mercenaries supporting Haftar's side in the east of the country are still in place. Turkey meanwhile has troops in Tripoli, which it argues were sent under a bilateral agreement with the government, implying that they are not affected by a request for foreign troops to leave.

But any withdrawal is also a delicate balancing act, said the German foreign minister.

"Foreign forces must leave the country in a gradual and uniform manner so that there won't be a sudden military imbalance that could be used by one side for a sudden offensive," Maas told Die Welt newspaper.

It is crucial that Libya holds a national election in December as the only way to ensure peace and stability in the North African country, Blinken also said before the conference.

"We share the goal of a sovereign, stable, unified and secure Libya, free from foreign interference," he said. "For this to happen national elections need to go forward in December. That means the urgent agreement is needed on constitutional and legal issues."

The U.S. special envoy for Libya, Richard Norland, welcomed the participation of Libyans in the talks.

“The U.S. goal is a sovereign, stable, unified Libya with no foreign interference and a state that is capable of combating terrorism within its borders. We strongly oppose all military escalation and all foreign military intervention, which only deepen and prolong the conflict," he told reporters in Washington ahead of the conference.

Norland said that it was important to start bringing all armed groups in the country under a joint military command.

“When foreign forces leave, they’re going to need to be replaced by a viable united Libyan national military and police structure,” he said.

A diplomat, speaking on the condition of anonymity, stressed the sensitivity of the situation, saying solutions could not be found overnight.

But he also voiced cautious optimism that some progress could be made on Wednesday because it was in no one's interest for conflict to break out again.

Jalel Harchaoui, Global Initiative senior fellow and an expert on Libya, also believed the talks could bring tangible help in the upcoming elections.

"Somebody could come up with a good idea of agreeing on a constitutional basis in July and be on course for elections in December," he said, referring to a key requisite for the polls.

"I think there's a good chance (for elections by year's end) and the Berlin process could help."