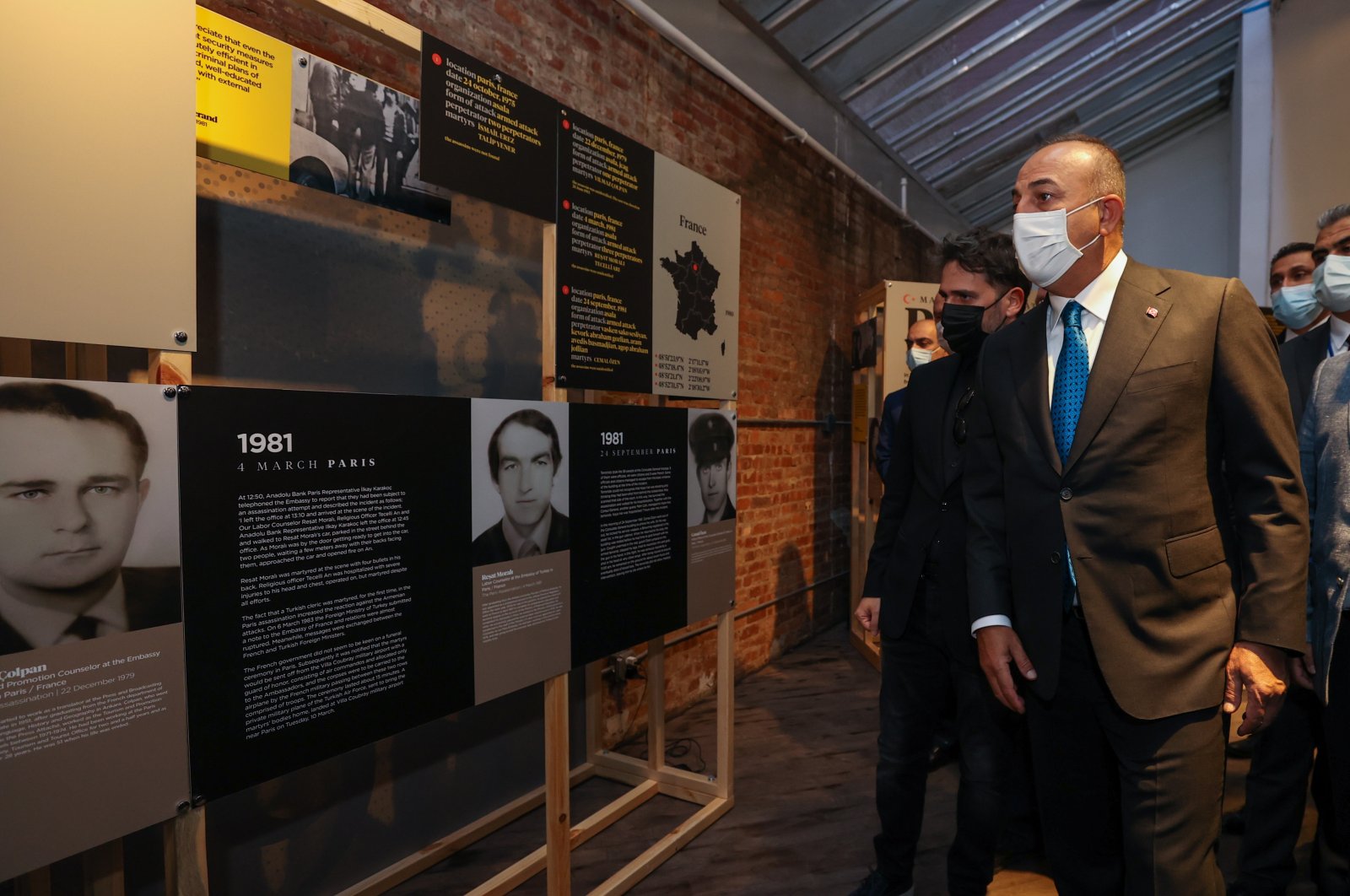 The exhibition being held to commemorate the Turkish diplomats killed by Armenian terrorists in New York will make an important contribution toward creating awareness among Americans and informing public opinion about the truth of the 1915 events at a time when it has been highly distorted for populist political goals, Foreign Minister Mevlüt Çavuşoğlu said Thursday.

Turkey's Directorate of Communications has opened an exhibition in the United States' New York City in memory of Turkish diplomats killed by Armenian terrorists between 1973 and 1984. An opening ceremony was held with the participation of top Turkish diplomat Çavuşoğlu.

Delivering a speech during the event, Çavuşoğlu thanked the Directorate of Communications and its director Fahrettin Altun for the exhibitions that opened in Los Angeles, Washington and New York.

He noted that a total of 58 Turkish citizens, including 31 diplomats, were killed during attacks by Armenian terrorist groups between 1973 and 1984.

"On this occasion, we once again commemorate our beloved martyrs with mercy and respect. We work to be worthy of all our martyrs."

Underlining the importance of the exhibition, Çavuşoğlu said: "I think it made an important contribution to raising the awareness of the American public about the facts, especially at a time when the 1915 events were distorted for populist political purposes. I would like the politicians who evaluate the 1915 events as 'genocide' with a political populist approach to see the facts. We see the actions and expressions of those who came to work with the discourses of international law and human rights that contradict these discourses."

"After Los Angeles, Istanbul and Washington, the ‘The Martyred Diplomats Exhibition' is now in New York," Altun also said on Twitter.

The exhibition in New York has become the third venue after opening its doors last month in Los Angeles, where Turkish diplomats were first targeted by Armenian terrorists. An exhibition in Washington was also opened earlier this week.

The exhibition reveals all the details about the terrorist attacks and assassinations that systematically targeted Turkey's diplomatic representatives. In the exhibition, which includes panels showing the terrorist attacks and assassinations carried out by Armenian terrorists by country and city-based graphics and a date strip, there are special images featuring the stories of the murdered diplomats, along with high-resolution photographs made with artificial intelligence technology.

In a statement for the "Martyr Diplomats Exhibition" released by the Directorate of Communications last month, it was stated that the attacks in the 1970s and 1980s carried out by Armenian terrorist groups – the Armenian Secret Army for the Liberation of Armenia (ASALA) and the Justice Commandos of the Armenian Genocide (JCAG) – killed 58 Turkish citizens, including 31 diplomats. A total of 77 people were killed in these attacks, and many were injured. The statement added that the exhibition is dedicated to Turkish diplomats who continued their duties despite the threats and attacks by Armenian terrorist groups between 1973 and 1984 and lost their lives for this purpose.

In a period when allegations of the so-called "Armenian genocide" are being ignited by Armenian lobbies and some countries for political goals, the exhibition also focuses on Turkey's efforts to reveal the truth and facts about the 1915 events. Last month, U.S. President Joe Biden recognized the events of 1915 as "genocide."