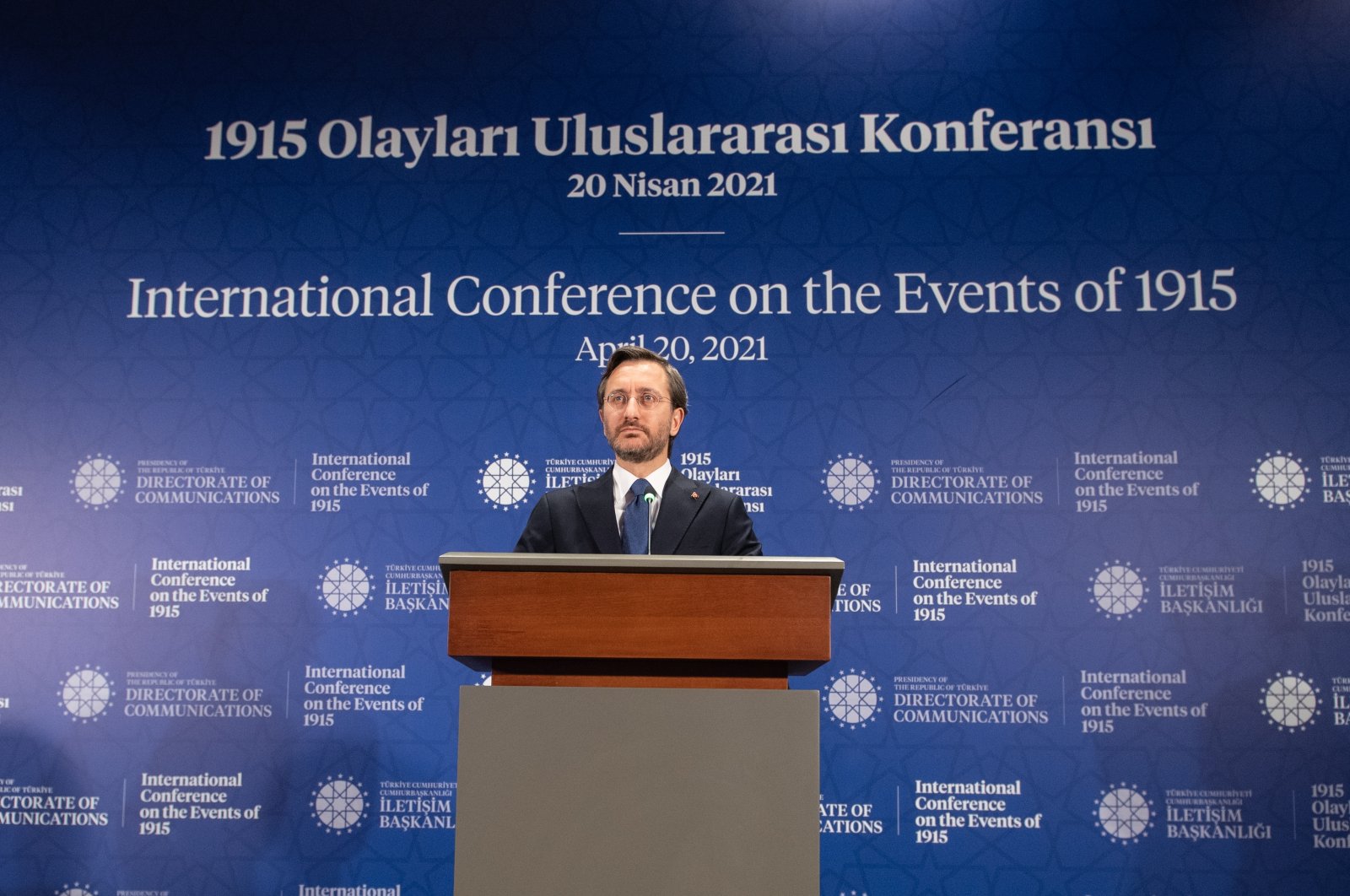 Speaking at a conference on the 1915 events, Communications Director Fahrettin Altun said that the common pains of the Anatolian people have been distorted to be used as a political tool and reiterated Turkey's call for historical facts to be revealed by historians

Suffering has been manipulated by international actors for their political agenda, Turkey’s communications director said Tuesday regarding the 1915 events.

Presidential Communications Director Fahrettin Altun also said that Turkey shares the pain and called on the historical facts to be revealed instead of a manipulated narrative for political goals.

In the opening session of the “International Conference on the Events of 1915” virtually organized by Turkey’s Directorate of Communications, Altun said that the previous century was an exceptional historical period that witnessed many breaking points in human history such as world wars, collapsing empires, changing borders and developing democracies.

“At the end of World War I, the Ottoman Empire, the Austria-Hungary Empire and Tsarist Russia were dissolved. In this first global war, millions of civilians and soldiers died. It caused trauma for every country that participated in the war,” he said, adding that some events were mythicized by distorting reality and others were ignored and lost their place in history.

“During this process, the Anatolian people, unfortunately, experienced some events that caused pain. While different nations in the Ottoman Empire were fighting against common enemies, some elements collaborated with the rival side.”

Altun noted that Armenian groups that collaborated with the enemy against the Ottomans were deported to Syria, adding that some undesirable incidents took place during the implementation of this security measure amid the war, and both sides experienced death and sorrow.

“This has constituted the basis of the current slander. We feel the pain of what happened during the deportation in our hearts,” he said and expressed Turkey’s condemnation of the manipulative narrative created by the distortion of the common history of the two nations who lived together in peace for centuries.

He said that the debate on what happened in 1915 still continues, despite occurring more than 100 years ago, because some actors insist on using the incident for their imperial goals by dragging the discussion into the political and ideological sphere.

He described politically motivated decisions based on the 1915 events as disrespectful of the victims and the suffering.

In recent years, the legislative bodies of some countries, including the U.S., France, Italy and the Netherlands, decided to recognize the 1915 events as “genocide."

The U.S. Senate unanimously passed a resolution on Dec. 12, 2019, recognizing the so-called Armenian genocide. The resolution had been blocked several times in the Senate, but the Democratic-led House of Representatives passed the resolution by an overwhelming 405-11 in late October. The resolution asserts that it is U.S. policy to commemorate the 1915 events as "genocide." The recognition of the 1915 events as "genocide" had stalled in Congress for decades, stymied by concerns over U.S.-Turkey relations.

Altun reiterated that Turkey has been calling for the truth and facts to be revealed, as a sign of its sincerity on the issue. He also noted that the most concrete steps about it have taken by the leadership of President Recep Tayyip Erdoğan.

Erdoğan last year offered condolences to the Patriarch of Turkey's Armenian community, as he highlighted determination to ensure that no citizen would be discriminated against based on their faith or ethnic identity. “We have never let even one citizen be otherized or discriminated against for their beliefs or identity,” Erdoğan said in a letter sent to Patriarch Sahak Maşalyan.

"I remember with respect the Ottoman Armenians who lost their lives in the difficult conditions of World War I, which caused immense suffering for the people of the world, as I extend my condolences to their grandchildren," the president said, adding that Turkey will not allow provocateurs to exploit history and spoil the unity of different people who have lived together in Anatolia for centuries.

Altun described the genocide allegations as lies feeding on political motives that do not have any connection to the truth or historical facts.

"Their concern is not about Ottoman Armenians or historical suffering. They turn pain in history into useful tools for their imperialist motives. The decisions taken by parliaments do not have any value for Turkey or truth."

Birol Çetin, the chair of the Turkish Historical Society (TTK), also said that some international actors hide behind politics and try to manipulate parliamentary decisions by lobbying in various countries.

He reiterated Turkey's call for historians to analyze the issue and that all archives should be opened, saying that all these calls have gone unanswered so far.

Turkey's position on the 1915 events is that the deaths of Armenians in eastern Anatolia took place when some sided with invading Russians and revolted against Ottoman forces. A subsequent relocation of Armenians resulted in numerous casualties, made worse by massacres conducted by militaries and militia groups from both sides. The mass arrests of prominent Ottoman Armenian politicians, intellectuals and other community members suspected of links with separatist groups, harboring nationalist sentiments and being hostile to the Ottoman rule were rounded up in then-capital Istanbul on April 24, 1915. The date is commemorated as the beginning of later atrocities.

Yerevan has demanded an apology and compensation, while Ankara officially refuted the Armenian allegations over the incidents, saying that although Armenians died during the relocation, many Turks also lost their lives in attacks carried out by Armenian gangs in Anatolia.