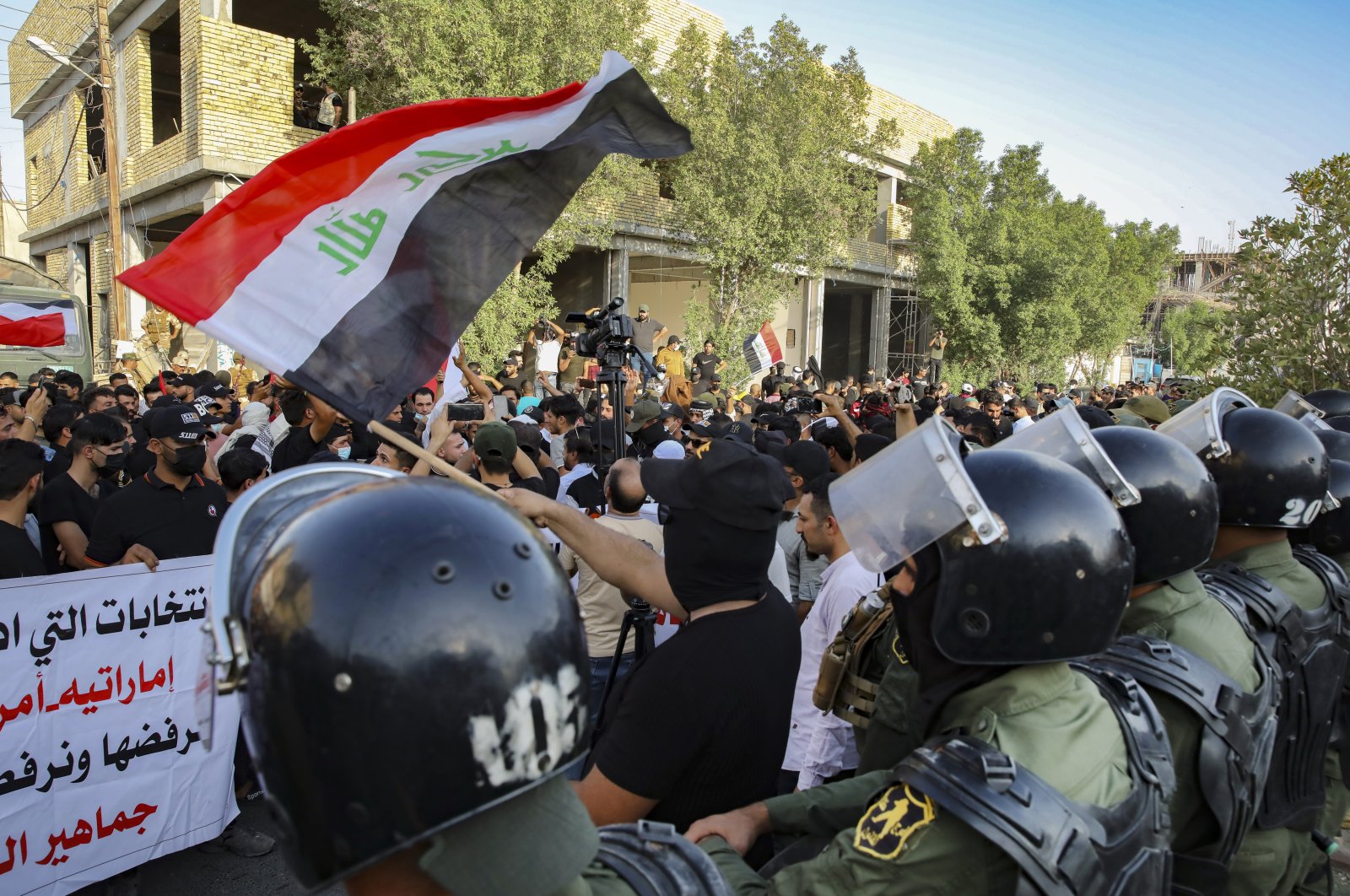 Experts state that a government formed by Muqtada al-Sadr, the Kurdistan Democratic Party (KDP) and Taqaddum would have warmer relations with Turkey as efforts to form the new Iraqi government continue

Following the Iraqi elections on Oct.10 in which pro-Iran groups suffered significant losses, all eyes are on the new coalition government that will be formed in the country. The new Iraqi government will influence the future course of bilateral relations with Turkey as well as the fight against terrorism in the country, analysts say.

"An al-Sadr-led government would be more advantageous for relations with Turkey. Considering that Maliki is not supported by regional countries other than Iran, it seems difficult he will be able to make an opening toward regional countries even if he forms the government,” Haydar Karaalp, Baghdad-based journalist of the Anadolu Agency (AA) told Daily Sabah.

Some 43% of eligible voters cast their ballots, an electoral commission said Sunday – marking the lowest turnout in the five elections since long-time ruler Saddam Hussein was toppled from power in 2003.

The big winner, with more than 70 seats according to the initial count, was the movement of Muqtada al-Sadr, a Shiite Muslim preacher who campaigned as a nationalist and critic of Iran, seeking to set himself apart from other Iran-backed Shiite factions.

“At this stage, if the government is formed with KDP and Taqaddum, the relations of the al-Sadr government and Turkey can be positive. Considering the already existing relations with the KDP and Halbousi’s Turkey visit just days before the election, we can expect that the new government will have warm relations with Ankara,” Duman said.

“Whoever forms the government, Turkey will seek and find a way to cooperate with them although an al-Sadr-led government with the Taqaddum and KDP would be more advantageous for Turkey. Ankara’s priority is to enhance relations with Baghdad.”

“However,” he said, “considering the intense effect of Iran, such a move proves difficult.”

Duman, on the other side, pointed to the fact that it is still not certain that al-Sadr will form the new Iraqi government while Maliki, with the support of groups close to Iran, is also vying to form the government. “It seems there will be a competition in this regard.”

In the election's biggest surprise, Maliki, an ally of the Hashd al-Shaabi, also known as the Popular Mobilization Forces (PMF), a network of paramilitary forces and a figure close to Iran, won more than 30 seats in the 329-seat parliament.

Karaalp further stated that the Sunnis and Kurds will not want to be part of a government that will fail before there is unity between the Shiites while he said it will be difficult for al-Sadr to win over the KDP due to his nationalistic stance.

“The KDP under Masoud Barzani will want to wait for a consensus between al-Sadr and Maliki. This is also the case for Halbousi who gained one third of Sunni votes. Maliki, on the other hand, wants to foil al-Sadr’s efforts to form a government as he tried before on (former Prime Minister-designate) Ayad Allawi.”

Karaalp said that Maliki could have the advantage in winning over the Kurds due to previous policies and giving Kurds good ministries in two terms of his government.

Duman highlighted that al-Sadr is highly eager and reiterated that, although he faced a similar situation in the previous election, this time he is taking a direct initiative to form the government, whereas before he just approved the government without determining a prime minister.

“Just a day after the elections, he created a four-person delegation to form a government and stated that the premier will come from within themselves.”

Stressing that it is also important with whom al-Sadr will form a coalition, Duman said: “My expectation is that a majority government will be formed this time, unlike the previous governments. Since 2008, there was a significant competition between al-Sadr and Maliki. There had been significant pressure on the Mehdi army led by al-Sadr during Maliki’s time as prime minister.” He elaborated that al-Sadr had to leave aside the demands of the Mehdi, a thousands-strong militia formed against American invaders, and has even left politics from time to time.

Speaking on the likely coalition that could emerge in the upcoming time, Duman said: “There are two key structures – Taqaddum and Barzani-led KDP. These seem to be two powers currently in the forming of the government” while he added that Halbousi and al-Sadr met with Barzani prior to the elections, indicating that negotiations had already begun.

The Taqaddum, or “progress,” bloc is led by the Sunni Parliament Speaker Mohammed al-Halbousi.

“On the other hand, it is also possible to say that there is tension between al-Sadr and political parties supported by Iran-aligned Shiite militia groups,” he said, reemphasizing that protests have been an ongoing challenge to the elections.

Hashd al-Shaabi and their allies denounced the election outcome as a "scam.”

“Al-Sadr will perceive these protests, as efforts for forming a government are continuing, against himself.”

The elections were originally scheduled for 2022, but political parties decided to hold early elections following mass protests that erupted in 2019 against deep-seated corruption and poor governance.

The polls saw 3,249 candidates representing 21 coalitions and 109 parties vying for seats in the assembly.

Many Iraqis have little faith in politics and had not expected the recent election to change the balance of power.

Oil-rich Iraq has been struggling with an economic and political crisis for years.

Iraqi politics have been dominated by factions representing the Shiite Muslim majority since the fall of Saddam's Sunni-led regime.

They are, however, increasingly split, especially on their attitude toward powerful Shiite neighbor Iran, which competes with the United States for strategic influence in Iraq.

Led by militia commanders who have close ties to Iran, the biggest grouping of Iran-aligned parties falls under the Fatah (Conquest) Alliance led by paramilitary leader Hadi al-Amiri, whose bloc came second in 2018 with 48 seats.

The Fatah Alliance, Hashd al-Shaabi's political wing, lost more than half of its 48 deputies, according to preliminary results.

The Alliance includes the political wing of Asaib Ahl al-Haq, which the U.S. has designated a terrorist organization and also represents the Badr Organization, which has long ties with Tehran and fought alongside Iran in the 1980-1988 Iran-Iraq war.

On the other side, the parties of Iraq's northern Kurdistan Regional Government (KRG) region, which has had de-facto autonomy since 1991 and became formally autonomous under Iraq's 2005 constitution, are also an important power broker.

The two main Kurdish parties are the Kurdistan Democratic Party (KDP), which dominates the government in the capital Irbil, and The Patriotic Union of Kurdistan (PUK) party, which dominates areas along the Iranian border and is headquartered in Sulaymaniyah.

“The KDP has made significant gains in these elections in both the KRG and Iraq. It is the fourth party in the Iraqi parliament and the first Kurdish party,” Karaalp said, indicating that the KDP will have a strong hand in negotiations for a government. He said the KDP could get the positions of president, foreign minister or economy minister.

“Iraq as well is suffering (just as) much from terrorism ... as Turkey. Today, Iraq is almost one of the main sources of terrorism. One of the major groups that Turkey is fighting is the PKK, which is currently in Iraqi territory,” Duman said, reminding that Turkey has made vital bilateral cooperation with Iraqi Prime Minister Mustafa al-Kadhimi and previously with the Adel Abdul-Mahdi government on fighting the PKK and other terrorist groups.

“One part of these cooperations is the KRG (Kurdistan Regional Government), therefore I evaluate the process independent from the government.”

“Even if groups close to Iran become part of the government, I believe that cooperation in this field will continue since terrorism is a common threat,” Duman said.

He gave the example of Qassem al-Araji, Iraq's national security adviser, member of the Badr Organization, which is close to Iran, and former interior ministers, saying that bilateral cooperation has taken place with al-Araji during both of his positions.

The Iranian-backed Shiite militia Asaib Ahl al-Haq earlier this year had stated it would "block any aggressive behavior" by Turkey, referring to the latter’s counterterrorism operations.

Another Iran-backed paramilitary group in Iraq, Harakat Hezbollah al-Nujaba, two weeks ago threatened to attack the Turkish military if it continues to carry out counterterrorism operations in northern Iraq. The group, designated as a terrorist organization by the U.S., is receiving military assistance, training and advice from Iran. Part of the Hashd al-Shaabi also warned the Turkish military and government to revise their plans.

PKK terrorists often use northern Iraq as a base to plan cross-border terrorist attacks on Turkey. The Turkish Armed Forces (TSK) regularly conduct cross-border operations in northern Iraq. Turkey has long been stressing that it will not tolerate terrorist threats posed to its national security and has called on Iraqi officials to take the necessary steps to eliminate the terrorist group. Ankara previously noted that if the expected steps were not taken, it would not shy away from targeting terrorist threats.

PKK terrorists are being heavily targeted in the Metina, Avashin-Basyan, Zap and Qandil regions in northern Iraq.