'No recognition of Turkish Cypriot sovereignty, no negotiations' 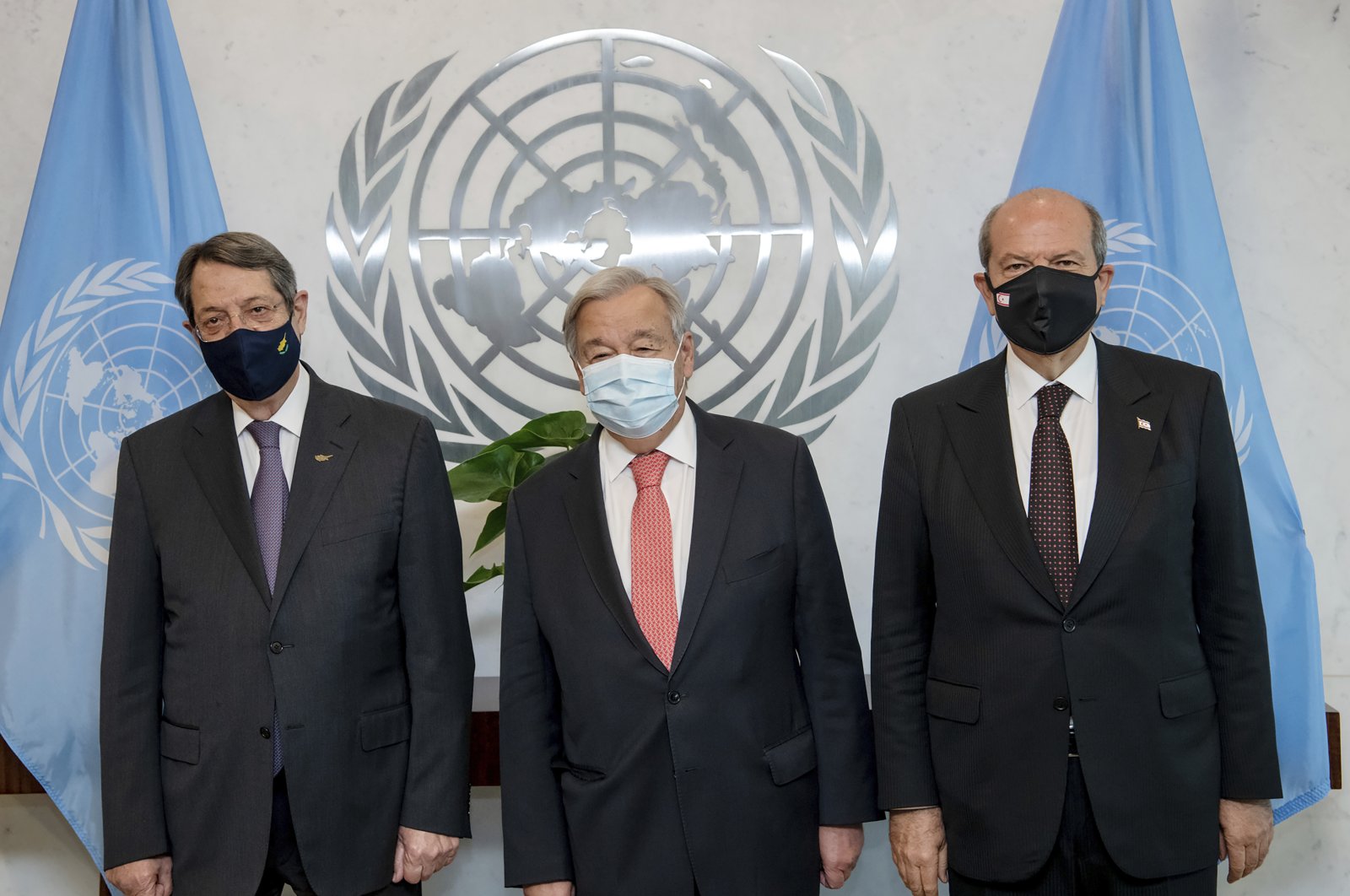 Negotiations to solve the decadeslong Cyprus problem will not start unless those talks take into consideration the sovereign equality and international status of the Turkish Republic of Northern Cyprus (TRNC), President Ersin Tatar said following a meeting with Greek Cypriot administration leader Nicos Anastasiades and U.N. Secretary-General Antonio Guterres in New York on Monday.

Speaking to reporters after the luncheon meeting, Tatar said that these talks cannot continue along the same path, as they have borne no fruit over nearly half a century of deliberations. There needs to be a new understanding, he said, echoing Guterres' statement that there is no urgency to begin formal negotiations in Cyprus as there is no common ground.

The TRNC president noted that there are two separate nations and two separate states in Cyprus, saying that if this situation is not recognized, the status quo will continue.

He also said that Turkish Cypriots are facing injustice.

"The Secretary-General also confirms this in his speeches. There is a state in the north," Tatar said. "This state has full-fledged institutions and organizations. That's why it is out of the question for us to take a step back from our own state from now on."

Earlier, after leaving the meeting, Tatar told Anadolu Agency (AA) that the Turkish side was working "to preserve our position to safeguard the interests of our community, of the Turkish Cypriot people."

"We will be using every opportunity to discuss the way forward," he said.

Tatar met Saturday with Guterres on the sidelines of the 76th session of the U.N. General Assembly in New York. The two exchanged views on the Cyprus issue, according to a statement by the U.N.

Anastasiades in a press briefing said he shared the Greek Cypriot administration's approaches on the solution of the Cyprus issue and that their positions are in line with U.N. Security Council resolutions.

"We also made proposals on how to move forward. The U.N. Secretary-General plans to appoint a special envoy for Cyprus," said the Greek Cypriot administration leader.

Anastasiades also said that Guterres will issue a statement regarding the trilateral meeting and how it will proceed from now on after consultation with both sides.

He said there will be no meetings between the leaders of both sides in the near future.

“We discussed different ways through which we can overcome the stalemate, but also to create conditions for a resumption of a productive dialogue,” Anastasiades said. He wouldn't go into details of the discussion but said Guterres is considering the appointment of a special envoy who would explore confidence-building measures and “search for common ground for the possible resumption of talks in the future.”

Cypriot Foreign Minister Nikos Christodoulides said in an interview later Monday with The Associated Press that the lunch meeting was “quite constructive" and also “positive because it shows the interest of the secretary-general to the Cyprus problem.”

He said the Greek Cypriots expect the new special envoy that the secretary-general appoints to visit Cyprus and the three guarantors of the island nation's independence — Turkey, Greece and the United Kingdom — “to see if it is possible to resume negotiations.”

“The only viable solution for Cyprus,” Christodoulides said, is as a federation.

The island has been divided since 1964, when ethnic attacks forced Turkish Cypriots to withdraw into enclaves for their safety. In 1974, a Greek Cypriot coup aiming at annexation by Greece led to Turkey's military intervention as a guarantor power. The TRNC was founded in 1983.

The Greek Cypriot administration, backed by Greece, became a member of the European Union in 2004, even though in a referendum that year most Greek Cypriots rejected a U.N. settlement plan that envisaged a reunited Cyprus joining the EU.