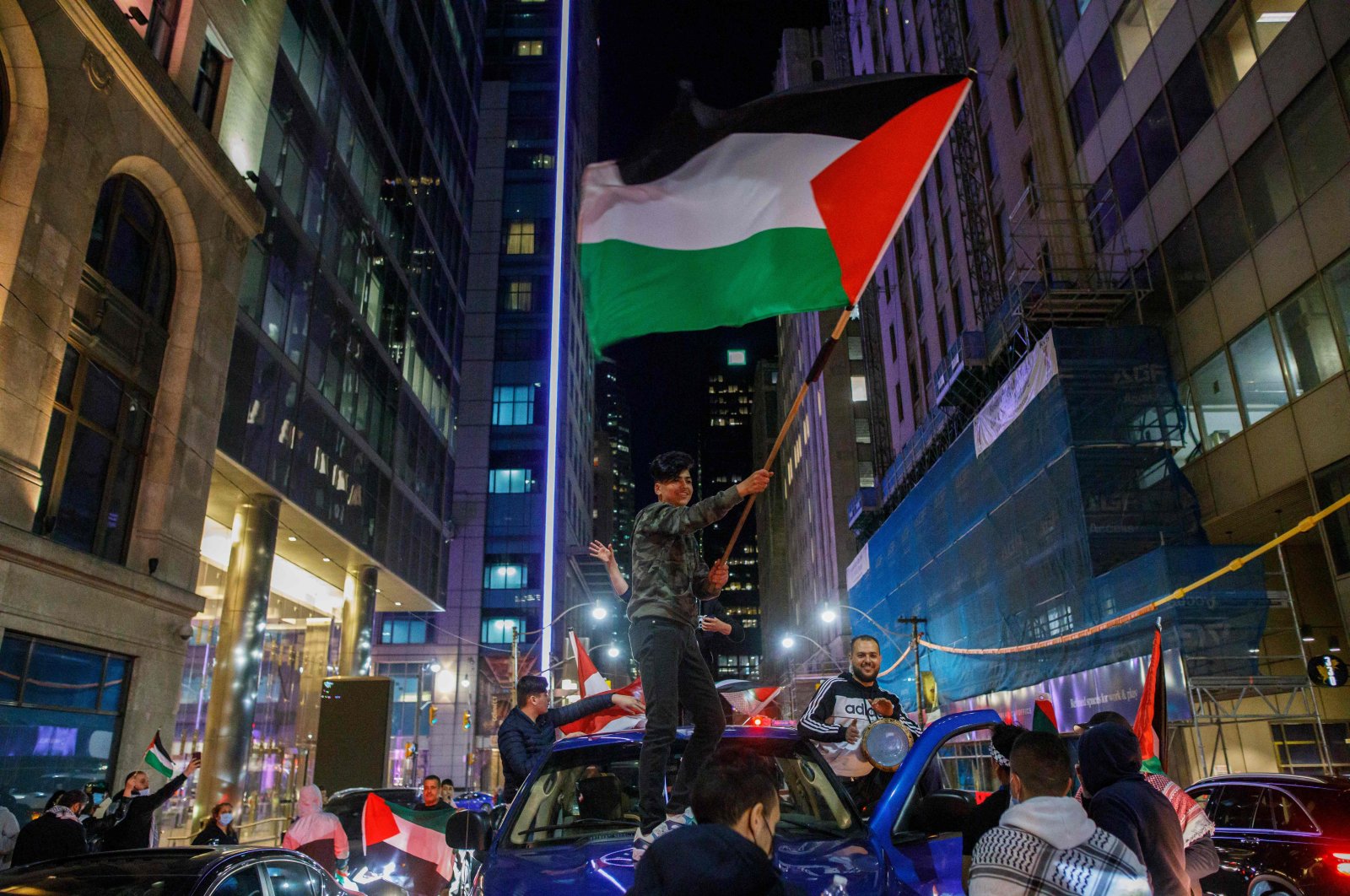 People wave flags atop cars in traffic during a demonstration to voice support for the people of Palestine, at Toronto City Hall in Toronto, Ontario, Canada, on May 15, 2021. (AFP Photo)
by DAILY SABAH WITH AA May 16, 2021 12:20 pm
RECOMMENDED

Palestinians will continue resisting Israeli occupation, Palestine's ambassador to Turkey said Saturday, as he marked Nakba Day, which commemorates the 1948 expulsion of hundreds of thousands of Palestinians from their homes in historical Palestine to make way for the new state of Israel.

Faed Mustafa released a video message for the Palestinian citizens living in Turkey and the Turkish people on the occasion of the 73rd anniversary of the nakba or "great catastrophe."

Mustafa said that the Palestinians continue to fight for their cause in Al-Aqsa, Jerusalem, Sheikh Jarrah, Bayt al-Maqdis, Gaza and other cities, as well as in refugee camps to where they were exiled.

The forced migration that followed the nakba was a great calamity and a genocide that has continued to this day, he said. "In 1948, more than 800,000 of 1.5 million Palestinian people living in Palestinian lands were forced to migrate," he noted.

Most of those people went to neighboring Arab countries, but also to the West Bank and Gaza, he added.

Mustafa also recalled that 774 Palestinian villages and cities were occupied by Israel during the nakba and that 531 of them were completely destroyed.

"With this genocide, the Zionist gangs committed more than 70 massacres against the Palestinians," he said, adding that "more than 15,000 Palestinians were martyred."

"Despite all the obstacles, occupation policies, and the murders during the occupation, we are taking firm steps to gain our rights. We will eradicate this invasion in our blessed lands," Mustafa said.

"Depending on our national principles, our blessed march will not stop until Palestinian flags fly in the heart and walls of Jerusalem."

"These people, who were reborn from their ruins in 1948 and (who) persevered and resisted with the will of their martyrs, have not changed in 2021 and will resist," Mustafa said.

"It is true that we paid great prices and shed blood and tears, but this is the tax paid by those whom Allah chose to protect the Al-Aqsa Mosque."

Mustafa conveyed his endless gratitude to the Turkish presidency, government, people, parties, Parliament and nongovernmental organizations for their unwavering stance in supporting the Palestinian people.

The Turkish foreign minister on Saturday voiced solidarity with the Palestinian people as they observed the 73rd anniversary of Nakba,

On Twitter, Mevlüt Çavuşoğlu said that Palestinian people have still been subjected to "ethnic, religious and cultural cleansing" since the Nakba in 1948, when hundreds of thousands of Palestinians were exiled from their homeland.

"Will forever stand by Palestinian brothers&sisters in their fight for freedom and dignity," he pledged.

Observed on May 15 annually, the Nakba Day marks the 1948 forced expulsion of nearly 800,000 Palestinians from their homes in historical Palestine. Seventy-three years ago, hundreds of Palestinians were forced by Zionist gangs to leave their villages and towns to neighboring countries like Jordan, Lebanon and Syria. Another part of Palestinians found themselves displaced to the Gaza Strip and West Bank to pave the way for the creation of the state of Israel.

Despite their decades-long suffering, however, Palestinians still continue to affirm their right to return to their homes and villages in historical Palestine, coming up with creating ways to make this right achievable. The Palestine-Israel conflict dates back to 1917 when the British government, in the now-famous Balfour Declaration, called for "the establishment in Palestine of a national home for the Jewish people". According to the Palestinian Central Bureau of Statistics, the Nakba resulted in the displacement of nearly 800,000 Palestinians out of 1.4 million Palestinians who lived in historical Palestine in 1948 in 1,300 villages and towns.

Palestinians today are exposed to unprecedented oppression and attacks of Israel in their homeland. A total of 145 people, including 41 children and 23 women, have been killed and 1,100 more injured since Israel started attacks on Gaza on May 10. The airstrikes on Gaza were preceded by days of tensions and Israeli aggression in occupied East Jerusalem, where hundreds of Palestinians were assaulted by Israeli forces and settlers at the Al-Aqsa Mosque and in the Sheikh Jarrah neighborhood. Tensions spread from occupied East Jerusalem to Gaza after Palestinian resistance groups vowed to retaliate for Israeli assaults.

Israel occupied East Jerusalem during the 1967 Arab-Israeli war and annexed the entire city in 1980 in a move never recognized by the international community.

Commenting on the latest Israeli attacks, Turkey's deputy foreign minister on Saturday rejected the notion that Israel was acting in "self-defense" and called out the international community for its silence on Israel's "brutal attacks" on Palestinians.

"Today is the 6th day of Israel's brutal attacks on Palestinians. 139 Palestinians, including 40 children, were killed in 6 days. Yet, the international community is silent," Yavuz Selim Kıran said on Twitter.

"Some even declare solidarity with Israel for "self-defense". Since when [does] "self-defense" means "killing children"?" he added.

Earlier, President Recep Tayyip Erdoğan had reiterated that Turkey will not remain silent and accept Israeli persecution of Palestinians as most of the world chooses to watch on and ignore the bloodshed.

Those who remain silent or openly back Israel's bloodshed should know one day it will be their turn, the president said. He called on the world to stand against Israeli attacks on Palestine, saying it was "a duty of honor for humanity."