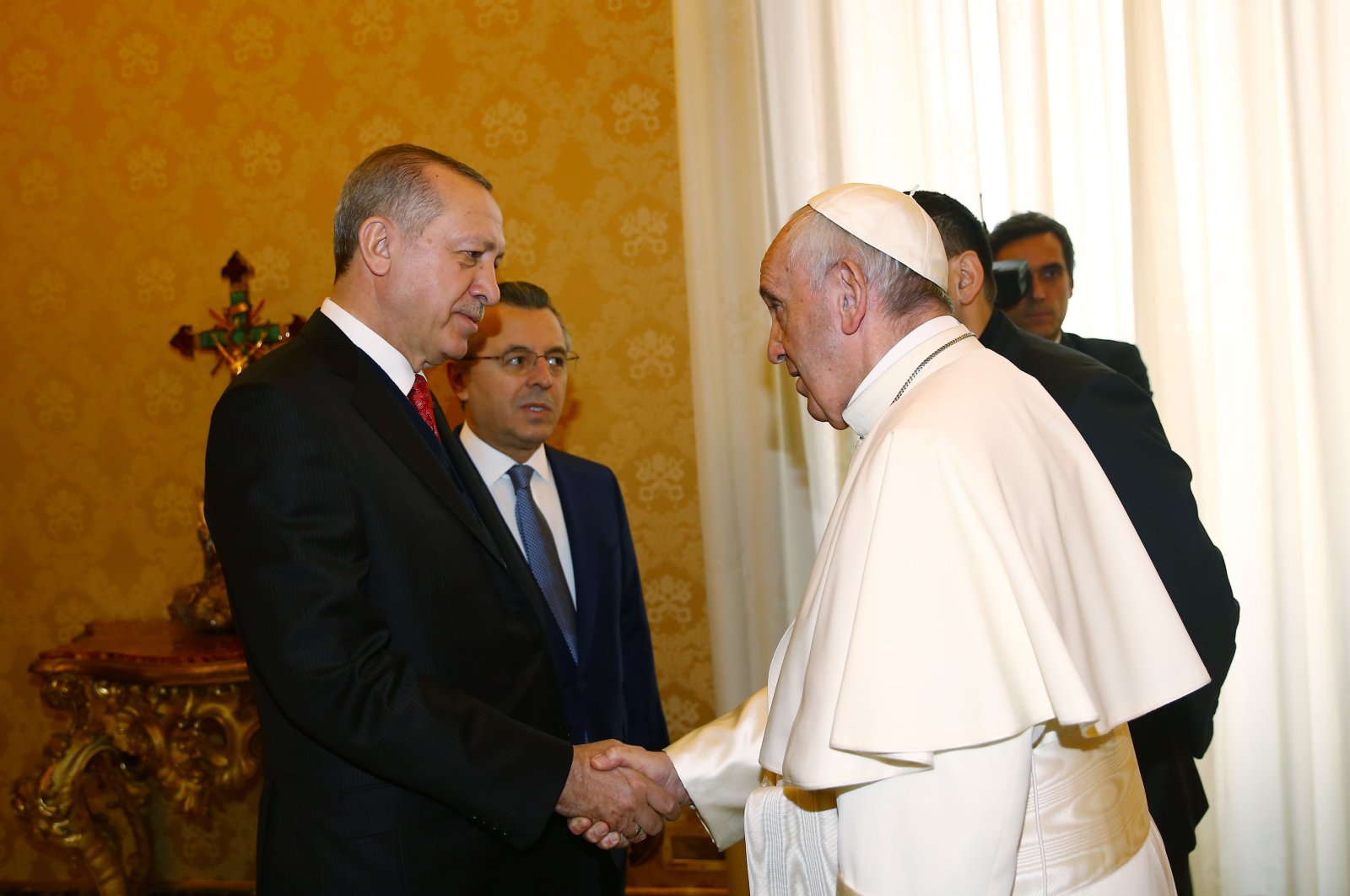 President Recep Tayyip Erdoğan meets with Pope Francis in Italy, Feb. 5, 2018. (Courtesy of the Turkish Presidency)
by DAILY SABAH May 17, 2021 11:42 am
RECOMMENDED

President Recep Tayyip Erdoğan in a phone call with Pope Francis Monday underlined that the pope's continued messages and reactions concerning Israeli attacks on the Palestinians will help mobilize the international community, as well as the Christian world.

Stating that an “atrocity” is being committed in Palestine, Erdoğan added that Israel is answerable to not only the Palestinian people but the whole of humanity, including Christians and Muslims.

Erdoğan further highlighted that Israel, which is blocking access to Al-Aqsa Mosque and the Church of the Holy Sepulchre and limiting freedom of worship, is undermining human honor while also endangering regional security.

He stated that all of humanity must unite in the face of Israel’s illegal and inhumane practices that also violate the status of Jerusalem.

The president pointed out that Turkey has been engaging in busy diplomatic efforts to deter Israel and ensure it is punished for its actions, while the United Nations Security Council (UNSC) has fallen short in displaying its necessary responsibility.

If the international community does not penalize Israel, which is conducting crimes against humanity, the Palestinians will continue to be massacred, Erdoğan added.

Meanwhile, the continuing Israeli strikes killed 42 Palestinians in the Gaza Strip Sunday, the worst daily toll in almost a week of deadly attacks, while the UNSC talks fizzled out despite global alarm at the escalating conflict.

U.N. Secretary-General Antonio Guterres pleaded for an immediate end to the "utterly appalling" violence and warned of an "uncontainable security and humanitarian crisis."

But the council meeting, already delayed by Israel's ally the United States, resulted in little action.

The death toll keeps rising in the Gaza Strip as rescuers extract bodies from the vast piles of smoking rubble, and the bereaved are left to wail in grief.

Tensions in Jerusalem soared in recent weeks as Palestinians protested against Israel's restrictions on access to parts of the Old City during the Islamic holy month of Ramadan, and after authorities ordered several Palestinian families to leave their homes to make way for Israeli settlers.

Erdoğan, since the beginning of the attacks, called on the international community to act as Turkish authorities have intensified diplomatic efforts to put an end to Israeli aggression against the Palestinians.

As Turkey continues its efforts to rally support from all relevant institutions, chiefly the U.N. and the Organisation of Islamic Cooperation (OIC) to support Palestine, Erdoğan has held phone talks with the leaders of nearly 20 nations, including Palestine, Russia, Pakistan, Kuwait and Algeria.

He urged the leaders to take a united stance against Israeli raids and attacks on Palestinians in Gaza, Al-Aqsa Mosque and Jerusalem.

Erdoğan first got in touch with Palestinian President Mahmoud Abbas and Hamas chief Ismail Haniyeh last week. He stated that Turkey will mobilize the whole world, especially the Islamic world, in order to stop “Israel’s terror and occupation.”

In contacts made since May 8, Erdoğan has discussed the matter with Russian President Vladimir Putin, Qatar's Emir Sheikh Tamim bin Hamad Al Thani and Jordan's King Abdullah II, among others.

Describing the attacks as "terrorism," Erdogan condemned the atrocities against Palestinian Muslims.

Erdoğan reiterated Turkey's support for the Palestinian cause and the sanctity of Jerusalem.

He further underlined that an idea of an international force to protect Palestinian civilians from Israeli aggression should be worked on, while he urged the international community to "teach a lesson to Israel, which lacks law, justice and a conscience."

Most recently, Turkey’s top diplomat Monday held a phone call with British Foreign Secretary Dominic Raab on the latest developments in Palestine and the international steps to be taken.

Israel is the only party responsible for the ongoing tensions with the Palestinians and the humanitarian crisis in the region and must be held accountable for its crimes, he stated Sunday during his address to the emergency meeting of the OIC, underlining that it is time to show solidarity, unity and determination.

Sources from the Turkish Foreign Ministry said that the meeting to discuss Israeli attacks on Palestinian people and territories was the initiative of Turkey and OIC term chair, Saudi Arabia.

Addressing the virtual meeting via video link, Çavuşoğlu said that Israel is responsible for the escalation of tensions in East Jerusalem, the West Bank and Gaza, explaining that the restrictions on Muslim prayers at Al-Aqsa Mosque and forceful displacement of Palestinians from their homes have triggered the ongoing situation.

Meanwhile, Justice and Development Party (AK Party) Deputy Chair Numan Kurtulmuş Sunday stressed the importance of diplomacy, saying: "At this point, there is no other way to prevent this persecution other than virtually stopping Israel. For this, it is vital to mobilize all international platforms, including the OIC, the Arab League and the UNSC."