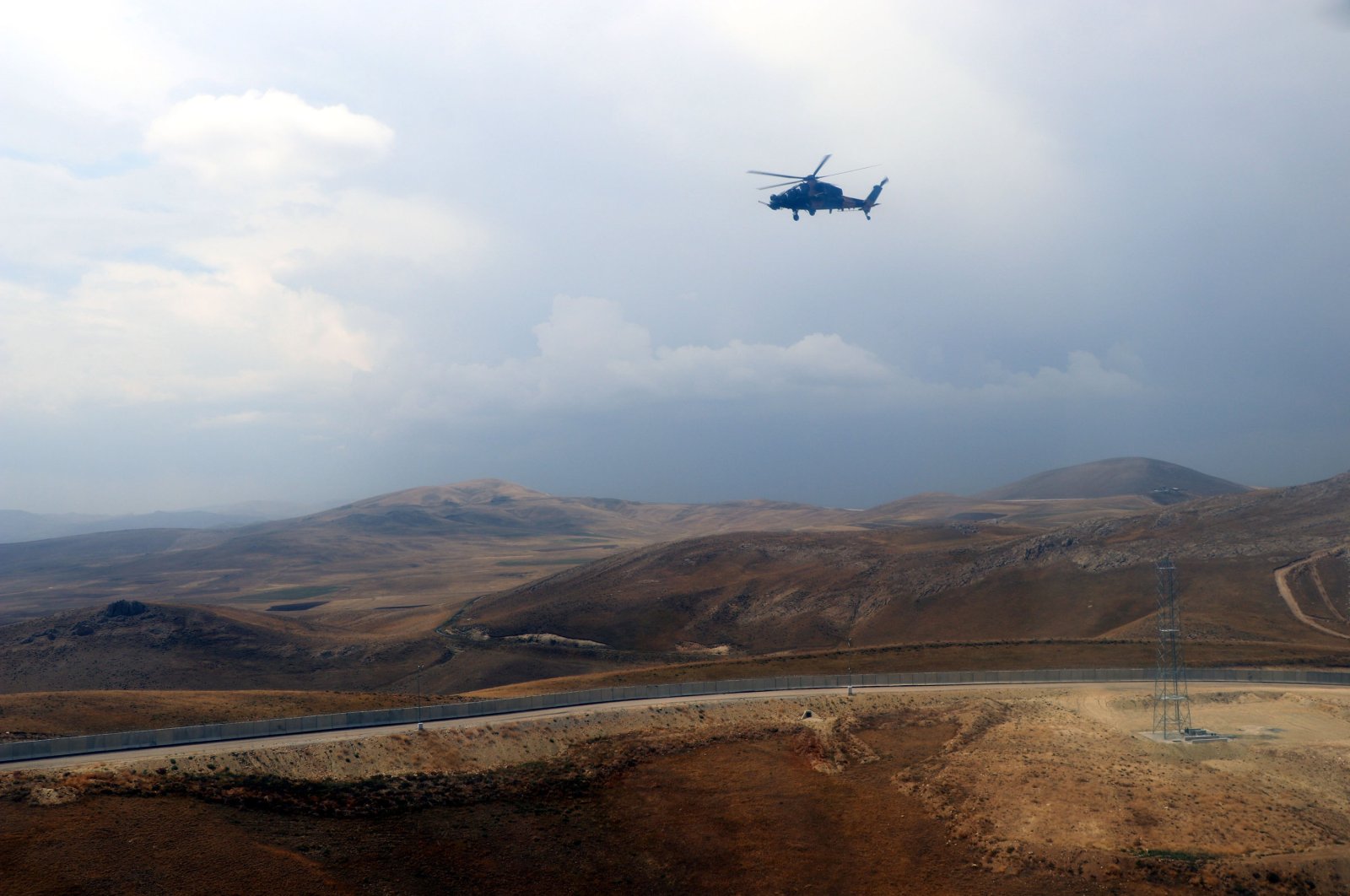 A helicopter flies over the construction of a modular wall across the Turkey-Iran borderline in Van province, eastern Turkey, Aug. 21, 2021. (DHA Photo)
by DAILY SABAH WITH AA Sep 06, 2021 11:20 am
RECOMMENDED

In the face of a new potential migrant wave due to the instability in Afghanistan, Turkey has maximized measures on its eastern border. The governor of Van, Turkey's eastern border province, reiterated Monday that security forces act in coordination and are on watch 24/7 thanks to technological data. He also rejected the claim that there is an influx of irregular migrants on the border.

The construction of one of the leading measures, the modular wall and smart tower, which starts on the Iranian border of Van's Çaldıran district and extends to Doğubayazıt in Ağrı and Yüksekova of Hakkari, continues.

In Van, which has the longest border with the neighboring country Iran, the security forces are taking every precaution to prevent illegal migration and smuggling activities, eliminate terrorists, catch irregular migrants who want to cross into Turkey and hand them over to the relevant institutions.

In the modular wall works initiated to prevent border crossings, 7 kilometers (4.3 miles) of the 63-kilometer section was completed, and a trench was dug for 130 kilometers along the border.

Van Governor Mehmet Emin Bilmez told Anadolu Agency (AA) that the measures on the border have been constantly increasing over the last three years.

Stating that the regiment that previously provided the security of the border was raised to the brigade level, Bilmez said that the gendarmerie served in 9 battalions, 44 police stations and nearly 150 towers.

Explaining that reinforcements were sent to the border after the developments in Afghanistan, Bilmez said: "We have maximized the measures at the border. We are doing our best to make the border impassable."

Bilmez pointed out that the security forces were protecting the border in a coordinated way and continued as follows: "We make use of the latest technology on the borderline. One hundred and three electro-optical towers were built along the border. There are thermal cameras, sensors and radars ... There are systems that detect the direction of the shot. We also make the most of drones. Our security forces work at the border 24/7 in coordination, using all technological data. There is no accumulation of migrants at the border. Sometimes there are people who somehow cross the border. We catch them in derelict buildings that we call 'shock houses.' There has been an increase in the complaints of citizens about this issue recently. We process the immigrants we catch at the removal center. We demolished over 100 derelict structures where immigrants were hiding."

Bilmez also mentioned the wall works are being carried out with three contractor companies at the border. "We have a borderline of 295 kilometers. While providing border security, on the one hand, we are building a wall on the other. Trench digging continues. We dug 130 kilometers of trenches. We built a 7-kilometer wall. By the end of the year, I hope we will finish the 64-kilometer wall work. Our President gave an instruction for another 100 kilometers to be tendered," he added.

Turkey is not the only country putting up barriers. Its neighbor Greece has just completed a 40-kilometer fence and surveillance system to keep out migrants who still manage to enter Turkey and try to reach the European Union.

Addressing the public concerns regarding a possible refugee wave, Erdoğan said that Turkey would ensure the refugees' safe return. Erdoğan also dismissed claims of the opposition that Turkey is hosting 1.5 million Afghan refugees. Regarding irregular migrants, Erdoğan said at least 235,000 Afghans have been sent back.

The number of irregular Afghan migrants detained in Turkey so far this year is less than a fifth of the number detained in 2019, and officials say they have not yet seen signs of a major surge since the Taliban victory, though the long distances mean refugees could take weeks to arrive. The Turkish side of the mountainous border with Iran is lined by bases and watchtowers. Patrol cars monitor around the clock for movement on the Iranian side, from where migrants, smugglers and terrorists frequently try to cross into Turkey.

Turkey has been a key transit point for asylum-seekers attempting to cross into Europe to start new lives, especially those fleeing war and persecution. Concerns have risen over a possible spike in migrants from Afghanistan, due to the United States' pullout from the country and the following surge of Taliban attacks.

Turkey has made it clear that it will not bear the burden of the migration crises experienced as a result of the decisions of third countries.

Bilmez also emphasized that they have maximized the security measures both on land, in the air and in the lake, and said: "Seven hundred and fifty police special operations, 35 teams and 50 armored vehicles are working on the borderline. It not only ensures the security of contractor companies doing the wall work, but also prevents border crossings by supporting military units. In support of the gendarmerie, three reinforced commando squadrons and a commando battalion came to our city as reinforcements. As the security measures on land increased, smugglers started to use Van Lake with boats. In this context, the Coast Guard Boat Command was established with the instructions of our Ministry of Interior. The teams also started to work in Van Lake. The Coast Guard Command is responsible for the entire lake."

Turkey has launched a new unit to prevent smuggling activities and ensure security on Lake Van. The Turkish Coast Guard Boat Command will play an active role in preventing irregular migrants from being taken to other provinces by boat, according to officials.

Stating that they have intensified the efforts against migrant smugglers this year, Bilmez said: "A record-breaking amount of organizers were caught. In 2021, 1,036 organizers were caught and handed over to the judicial authorities. Nearly half of them were arrested. The trials of the others are still ongoing. The penalties are not enough of a deterrent. The number of organizers we caught last year was 599."

No surge in migrants

In a press briefing, Interior Ministry spokesperson İsmail Çataklı also said Monday that the negative claims on Turkey's security border are unjust to the soldiers in charge of border security, the police who support them, the gendarmerie and the reputation of the state.

"Turkey is not demanding, welcoming or displaying deliberate inaction on this influx, as some groups claim," he said.

"In 2020, despite the negative effects of the pandemic, we prevented the migration of 122,000 people. Since the beginning of the year, 94,915 irregular migrants have been caught," he added.