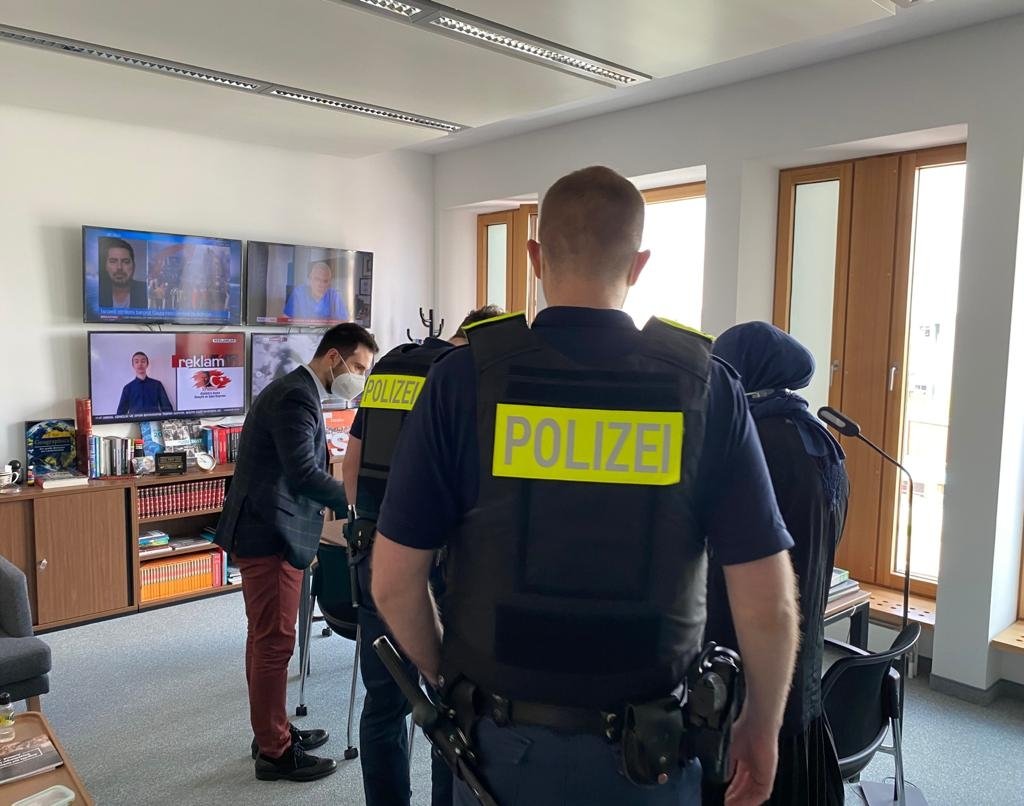 German police receive information from TRT Deutsch officials in the news platform's office in Berlin, Germany, May 19, 2021.
by DAILY SABAH May 19, 2021 1:39 pm
RECOMMENDED

TRT Deutsch received the letter signed by the racist Prinz Eugen Group, which carries the name of a notorious military group that was among SS soldiers during the Nazi era.

“These threats only prove that we are doing our job well. We are filling a gap that German media has failed to complete, as they’re turning a blind eye on important topics such as racism and Islamophobia. Racists will not quash our motivation to unfold the truth," he said.

As the German police stated, the letter is "racist, anti-Muslim and anti-Turkish," depicting a presumably Muslim person with a beard and wearing a bomb-shaped hat. Police have taken the writing as evidence and forwarded it to state security authorities.

The new letter marks the third time that the TRT Deutsch has received such threats within a year. Investigations of the first two have led to no results, although police promised clarification.

The letter comes after the Berlin-based news platform was deliberately targeted by public persons and German media outlets in the past five days over its coverage of the Israel Palestine conflict.

The Turkish community in Europe is concerned with the rising trend of Islamophobia and Turkophobia in Western countries, calling on European states to escalate measures against hate crimes.

Germany has been recording Islamophobic crimes separately since 2017. In 2018, there were 910 incidents, including 48 attacks on mosques alone, a little lower than 2017's 1,095 crimes. In 2019, some 871 attacks targeted the Muslim community in Germany, while 2020’s data has not yet been announced. Every other day throughout the course of 2019, a mosque, a Muslim institution or a religious representative in Germany was targeted in anti-Muslim attacks. More than 90% of these were attributed to politically motivated crimes by the far-right.