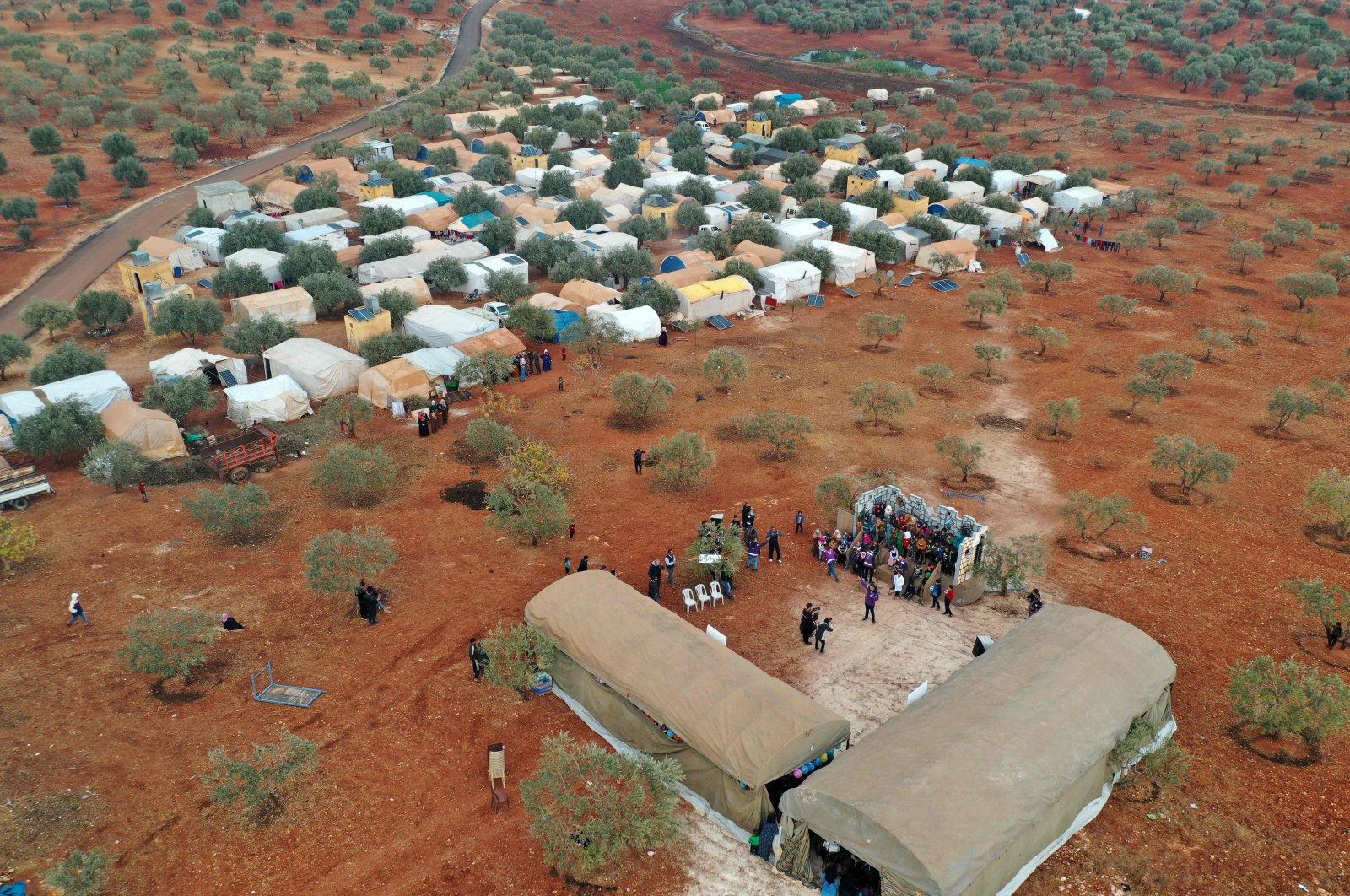 An aerial view of children singing in a choir during an outdoor event celebrating World Children's Day at the Haranbush camp for displaced Syrians in the opposition-controlled Idlib province, Syria, Nov. 20, 2021. (AFP Photo)
by DAILY SABAH Nov 26, 2021 10:42 am
RECOMMENDED

Speaking during a televised interview, Kurtulmuş said Turkey aims for people of all ethnic backgrounds to live in peace in Syria.

"For this, Syria's territorial integrity must be protected," he said.

Since the beginning of the Syrian civil war in 2011, Turkey has backed moderate opposition groups against the Bashar Assad regime. Also, Turkish forces carried out several cross-border operations to clear its border from the occupation of the PKK terrorist group's Syrian affiliate, the YPG, and the Daesh terrorist group in order to provide national border security and create a stable environment for local people living near Turkish borders.

After these operations, a large area in northern Syria consisting of Ras al-Ain, Tal Abyad, Jarablus, al-Bab, and Azaz towns and districts are controlled by Syrian opposition groups backed by Turkey.

Northwestern Syria's Idlib region is also home to nearly 3 million people, two-thirds of them displaced from other parts of the country. The Idlib de-escalation zone was forged under an agreement between Turkey and Russia. The area has been the subject of multiple cease-fire agreements, which have been frequently violated by the Assad regime and its allies.

Referring to the recent agreements made with the United Arab Emirates (UAE), Kurtulmuş said that the two countries have to restore friendship and brotherhood.

"We care about the development of good relations with the countries in our region and we know that it will lead us to a good place," he said.

This was his first official visit to Turkey since 2012 and the first top-level meeting between the UAE and Turkey in recent years.

Following a meeting between the two leaders at the Presidential Complex, Turkey and the UAE signed bilateral cooperation agreements in numerous fields, including trade, energy and the environment.

The crown prince's visit to Turkey is viewed as part of a wider effort by the UAE to recalibrate its foreign policy following an unsuccessful attempt to isolate fellow Gulf state Qatar in 2017. Turkey, an ally of Qatar, rushed to support Doha amid an embargo imposed by the UAE and three Arab states. Turkey has since deepened its military ties with Qatar. The Arab quartet at the time demanded a series of reversals by Qatar, including the expulsion of Turkish troops, but Doha rejected the demands, which it saw as violations of its sovereignty. The dispute was resolved earlier this year with an agreement signed in Saudi Arabia.