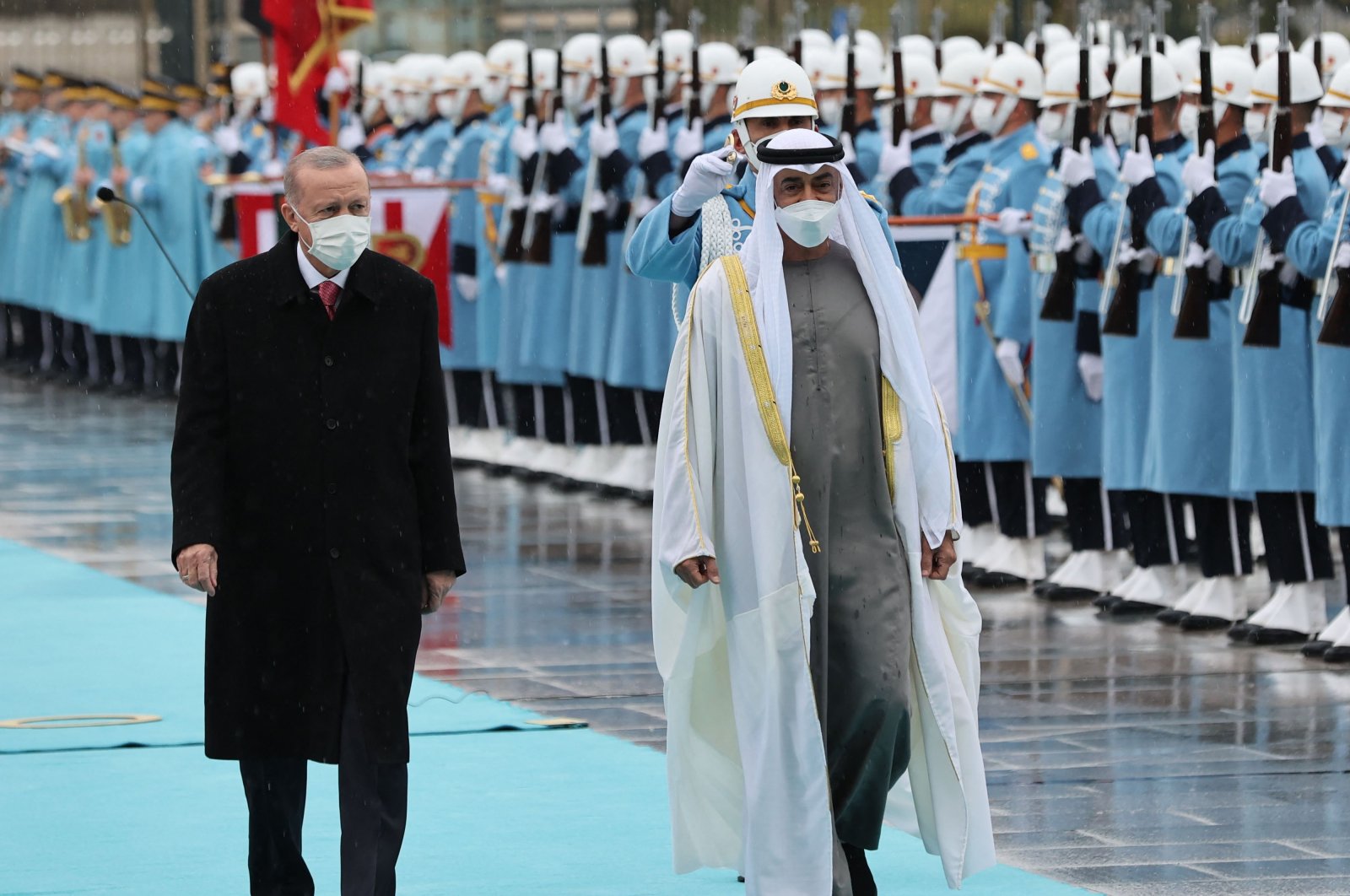 The visit by the crown prince, seen as the de facto leader and the force behind the UAE’s foreign policy posture, was his first official trip to Turkey since 2012, and the highest-level visit by an Emirati official since relations hit a low as the countries have battled for regional influence and backed opposing sides in conflicts. The crown prince’s brother, the UAE national security adviser Tahnoun bin Zayed Al Nahyan, visited Turkey in August as the first major step toward mending strained ties.

A statement from the Turkish president’s office had said the two leaders would discuss bilateral ties as well as steps that can be taken to expand cooperation. They would also exchange views on regional and international developments.

Ahead of the visit, one source familiar with the preparations for MBZ's visit stated that there has been an increasing Emirati interest in Turkish defense companies, which have established lucrative opportunities with domestic production capabilities in recent years. The Abu Dhabi Investment Authority and other Emirati companies are also reportedly interested in health care, fintech targets and other industries in Turkey.

Turkey and the UAE are expected to agree on investment deals during the visit, two Turkish officials also told Reuters earlier Wednesday.

"It is expected that some deals on the economy, technology, environmental issues, cyber security and logistics that are still being worked on will be signed," a senior Turkish government official said, speaking on condition of anonymity.

A Turkish official familiar with preparations for the visit said deals could be agreed in the e-commerce, energy, and supply chain fields. Longer-term economic cooperation could come in funding and through UAE companies purchasing or establishing partnerships with their Turkish counterparts, the official said, predicting total UAE investment would ultimately be in the billions of dollars.

The memorandums of understanding are expected to be signed between the Abu Dhabi Development Holding (ADQ), Turkish Wealth Fund (TVF), and the Turkish Presidency Investment Office, as well as with some Turkish companies, including Kalyon Holding and CCN Group.

The two countries will also evaluate ways to cooperate in foreign policy. "Problems with the UAE are now behind us. We are entering a period based fully on cooperation and mutual benefit," the official said.

The Arab quartet at the time demanded a series of reversals by Qatar, including the expulsion of Turkish troops, but Qatar rejected the demands as violations of its sovereignty. The dispute was resolved earlier this year with an agreement signed in Saudi Arabia.

Turkey is also engaged in an effort to mend its frayed ties with regional powers, including Egypt and Saudi Arabia. Erdoğan had reiterated that Turkey hopes to maximize its cooperation with Egypt and Gulf nations "on a win-win basis," at a time when Ankara intensified diplomacy to mend its fraught ties with Cairo and some Gulf Arab nations after years of tensions.

Erdoğan said after his meeting with Sheikh Tahnoun in August that he expected increased investments from the UAE in Turkey. Sheikh Tahnoun’s visit was followed by a telephone call between Erdoğan and the crown prince.

Turkey’s trade and finance ministers visited Abu Dhabi and Dubai on Tuesday, a visit that further helped set the stage for Wednesday’s top-level meeting in Ankara.