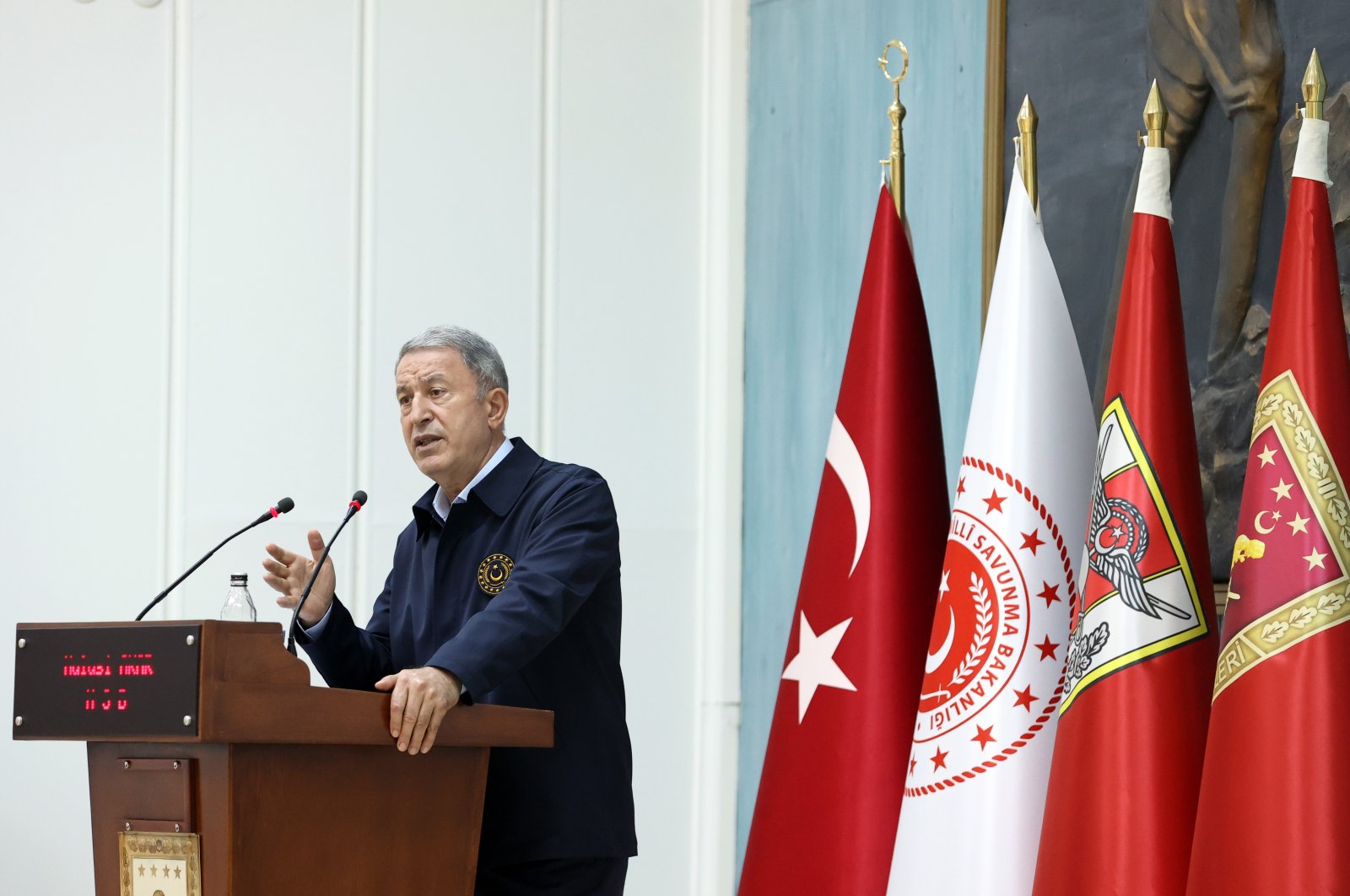 Turkey aims to continue its contributions to the security, peace and welfare of its Afghan brothers, Defense Minister Hulusi Akar said Friday amid ongoing talks with the United States for a Turkish mission to guard and run Kabul's Hamid Karzai International Airport after the withdrawal of NATO troops from the war-torn country.

Visiting a military command in eastern Turkey's Malatya province, Akar addressed the military personnel and briefed them about the Afghanistan process.

Stating that Turkey has made great efforts to ensure that its Afghan brothers live in an environment of peace, security and stability, Akar said Turkey has been a member of the International Security Assistance Force since its first assignment in 2002, and it has continued to contribute to NATO's Resolute Support Mission since 2015.

"The responsibility of preserving the gains achieved so far and operating the Hamid Karzai International Airport, which we have been carrying out for six years, will be continued by us if the necessary conditions are met. Hamid Karzai International Airport is of vital importance for Afghanistan, it is the gateway to the whole country. Discussions continue on the issue. We are working on how we can do this together with other countries. No decision has been taken at the moment. We want to achieve appropriate results for the interests of our country and Afghanistan. Our aim is to continue our contributions to the security, peace and welfare of our Afghan brothers," he said.

Akar on Thursday also said that Turkey will likely run and guard Kabul Hamid Karzai International Airport in Afghanistan if the necessary conditions are met, adding that no additional personnel is to be sent there.

Akar said that a delegation from the U.S. came to the ministry early Thursday and talks about the future of Kabul airport after the withdrawal of U.S.-led NATO troops have been launched.

Turkey, whose forces in Afghanistan have always been comprised of noncombatant troops, has offered to guard and run Hamid Karzai airport after NATO's withdrawal and has been holding talks with the United States on logistic and financial support for the mission, as questions remain on how security will be assured along major transport routes and at the airport, which is the main gateway to the capital, Kabul.

Ties between Turkey and its NATO allies have been strained over a host of issues, ranging from Ankara's purchase of a Russian defense system to policy differences in Syria, Libya and the Eastern Mediterranean.

The mission could be a potential area of cooperation between Ankara and its allies amid strained ties, as the security of the airport is crucial for the operation of diplomatic missions out of Afghanistan after the withdrawal. Ankara has said it cannot carry out the mission without support.

Erdoğan said after the meeting that Turkey was looking for “diplomatic, logistic and financial assistance” from the United States to protect and operate the airport. Turkey also wanted Pakistan and Hungary to be involved in the mission, he said.

Stating that there is no difference between the PKK terrorist organization and its Syrian branch, the YPG, Akar also said: "There is no reason for some of our allies to cooperate with the YPG and to provide them with weapons, tools and equipment, while reports, photographs and other evidence is available. This support is expressed in all kinds of contacts and speeches at the level of the president, minister and chief of staff, and this is not acceptable," he said.

Explaining that Turkey prevented the establishment of a terror corridor on the southeast border with its operations, Akar said, "If it were not for the Euphrates Shield, Olive Branch and Peace Spring, we would be faced with very different, much more difficult formations, and the situation would be a lot more difficult."

Noting that the struggle in the north of Syria and Iraq continues, Akar also said that they are working to protect Turkey's rights and interests in the Aegean, Eastern Mediterranean and Cyprus.

Akar recently underlined that the greatest challenge that Turkey-U.S. relations face is not Ankara’s purchase of the Russian S-400 missile defense system but rather Washington’s support for the PKK terrorist organization’s Syrian wing YPG.

The U.S. primarily partnered with the YPG in northeastern Syria in its fight against the Daesh terrorist group, while Turkey strongly opposed the YPG's presence in northern Syria. Ankara has long objected to the U.S.' support for the YPG, a group that poses a threat to Turkey and that terrorizes local people, destroying their homes and forcing them to flee.

Furthermore, local people living in areas held by the YPG have also long suffered from its atrocities, as the terrorist organization has a notorious record of human rights abuses including kidnappings, recruitment of child soldiers, torture, ethnic cleansing and forced displacement in Syria. The YPG has forced young people from areas under its control to join its forces within its "compulsory conscription."

Since 2016, Turkey has launched a trio of successful anti-terror operations across its border in northern Syria to prevent the formation of a terror corridor and enable the peaceful settlement of residents, including Euphrates Shield (2016), Olive Branch (2018) and Peace Spring (2019).

In its more than 40-year terror campaign against Turkey, the PKK, listed as a terrorist organization by Turkey, the U.S. and the EU, has been responsible for the deaths of at least 40,000 people, including women, children and infants.