Turkey aims to win together with Africa, FM Çavuşoğlu says 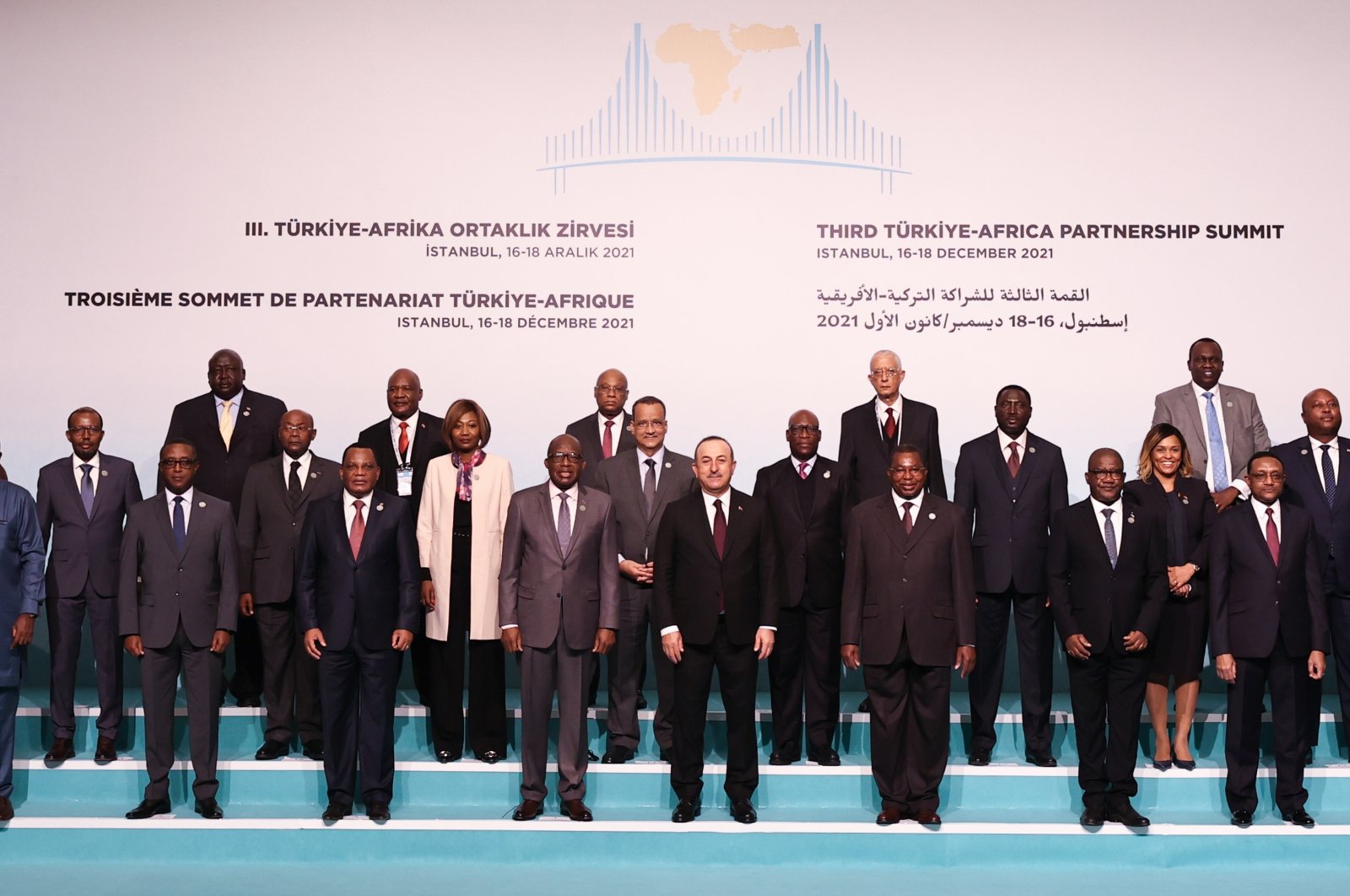 Turkey aims to win alongside Africa and march together towards the future, Foreign Minister Mevlüt Çavuşoğlu said Friday in his commencement speech at the third Turkey-Africa Partnership Summit's foreign ministers meeting in Istanbul.

Stating that Turkey was pleased with the intense participation in the summit despite the ongoing pandemic, he said: "While six heads of state and government attended our first summit in 2008 and seven heads of state attended our second summit in 2014, we host 16 heads of state and government at this summit. We are hosting 102 African ministers, 26 of whom are foreign ministers, in Istanbul on the occasion of the summit. High participation is actually an indicator of the level our ties with Africa have reached."

Highlighting that the theme of this year's summit is “Enhanced Partnership for Common Development and Prosperity,” Çavuşoğlu said: "We want to walk the path of development and prosperity with our African friends and carry our cooperation to the future. Our aim is to win together with Africa, to walk into the future together. Our view of relations with Africa is strategic and long-term. Our president is one of the leaders who visited Africa the most, with 50 visits to 30 African countries."

The first Turkey-Africa Partnership Summit was held in Istanbul, the second in Malabo, the capital of Equatorial Guinea, and the third just kicked off at the Istanbul Congress Center. Held under the auspices of the Turkish Presidency, the three-day summit, which will continue until Saturday, is being attended by heads of state or government and representatives of international institutions from African countries. The summit is expected to launch a new stage in Turkey’s relations with the African Union (AU) and African countries, according to Turkey’s Foreign Ministry.

"With the communique, action plan and joint implementation report, expected to be adopted at the summit, relations improving in every area between Turkey and Africa, including the concrete projects to be carried out for the benefit of the continent, will be shaped between 2022 and 2026 until the next summit," Turkey's Communications Directorate also said in a statement.

Çavuşoğlu called special attention to the partnership and cooperation in the fields of culture, health, education and defense through the relevant Turkish ministries and the efforts of nongovernmental organizations (NGOs) and Turkish agencies on the continent, including the Turkish International Cooperation and Development Agency (TIKA), the Presidency of Religious Affairs (Diyanet) and the Turkish Red Crescent (Kızılay).

"THY (Turkish Airlines) is not only a bridge of friendship between Turkey and Africa, but also connects Africa to the world. Turkish investors leave permanent traces all over Africa," he added.

Noting that the relevant ministries held meetings in the fields of health, agriculture and education within the scope of the summit, Çavuşoğlu said that an action plan for the next five years would be accepted at the summit.

"This action plan, which will have five main topics, includes concrete steps in various areas such as development, trade, industry, education, informatics, women, youth, infrastructure, agriculture, and health," he said.

Çavuşoğlu underlined that the aim is to establish peace and stability in Africa. "We will continue to increase our support to Africa in the fight against terrorism. I would like to take this opportunity to thank our African friends who stand by us in the fight against the Gülenist Terror Group (FETÖ). The establishment of lasting peace can only be achieved through political stability. For this reason, we would like to underline that we are against the violent change of hands of elected governments."

"Thank God, we are a country without a stain of colonialism in our history. We will continue to walk together, despite the circles that claim that Africa will not come out of this vicious circle that mentions underdevelopment, civil wars and coups. Because we believe in Africa," he added.

Çavuşoğlu met on Thursday with his counterparts from several African countries attending the summit.

The top Turkish diplomat said on Twitter that he met with Albert Shingiro of Burundi, Kandia Camara of the Ivory Coast and Frederick Musiiwa Makamure Shava of Zimbabwe.

Later, in a tweet, he said he held his last meetings of the day on the sidelines of the summit with Lejeune Mbella Mbella of Cameroon and Cherif Mahamat Zene of Chad.

The minister said he also met with the acting speaker of Libya's House of Representatives, Fawzi al-Nuwairi.

The official opening of the summit will be held on Saturday, Dec. 18 with the participation of President Recep Tayyip Erdoğan and the leaders of African countries.

In addition, Erdoğan will meet with his counterparts at the Dolmabahçe working office as part of the summit.

Erdoğan will also attend the dinner being thrown to honor of the heads of state and government who attended the third Turkey-Africa Partnership Summit at Dolmabahçe Palace.

Meanwhile, bilateral meetings at the ministerial level are being held with the heads of state and government within the scope of the summit.

Concrete projects to be realized in the 2022-2026 period for the benefit of Africa have been included in the action plan.

The declaration to be accepted at the summit aims to provide strategic direction to the developing relations between Turkey and Africa in all fields until the next summit.

The next Turkey-Africa Partnership Summit will be hosted in an African country.

Erdoğan in October once again reaffirmed that Turkey’s approach in its ever-growing relations with African countries is based on equal partnership and a win-win principle, emphasizing the strong will to further develop commercial ties. Earlier in the same month, he embarked on a four-day diplomatic tour to three African countries, Angola, Nigeria and Togo, as part of the country's African policy to contribute to the economic and social development of the continent with peace and stability, as well as to develop bilateral relations on the basis of equal partnership and mutual benefit. During the tour, Erdoğan underlined that Western countries for years exploited the continent of Africa for their own interests and reiterated his message for a fairer world by calling the oppressed to act together for this aim.

Turkey’s engagement with the African continent has been gaining pace over the years. Since taking office nearly two decades ago, first serving as prime minister, Erdogan has been fostering ties with Africa, presenting Turkey as a fairer player than the continent’s former colonial powers. Ankara has been stressing the desire to advance relations with the continent on the basis of a win-win relationship and equal partnership while observing mutual respect. Both sides have been vowing to tap into their greater potential when it comes to further expanding and deepening relations.

Turkish Airlines offers flights to 60 different destinations across 39 African countries while the TIKA has nearly 30 coordination centers on the continent. The Foreign Economic Relations Board (DEIK) has joint business councils with more than half of the nations in Africa.