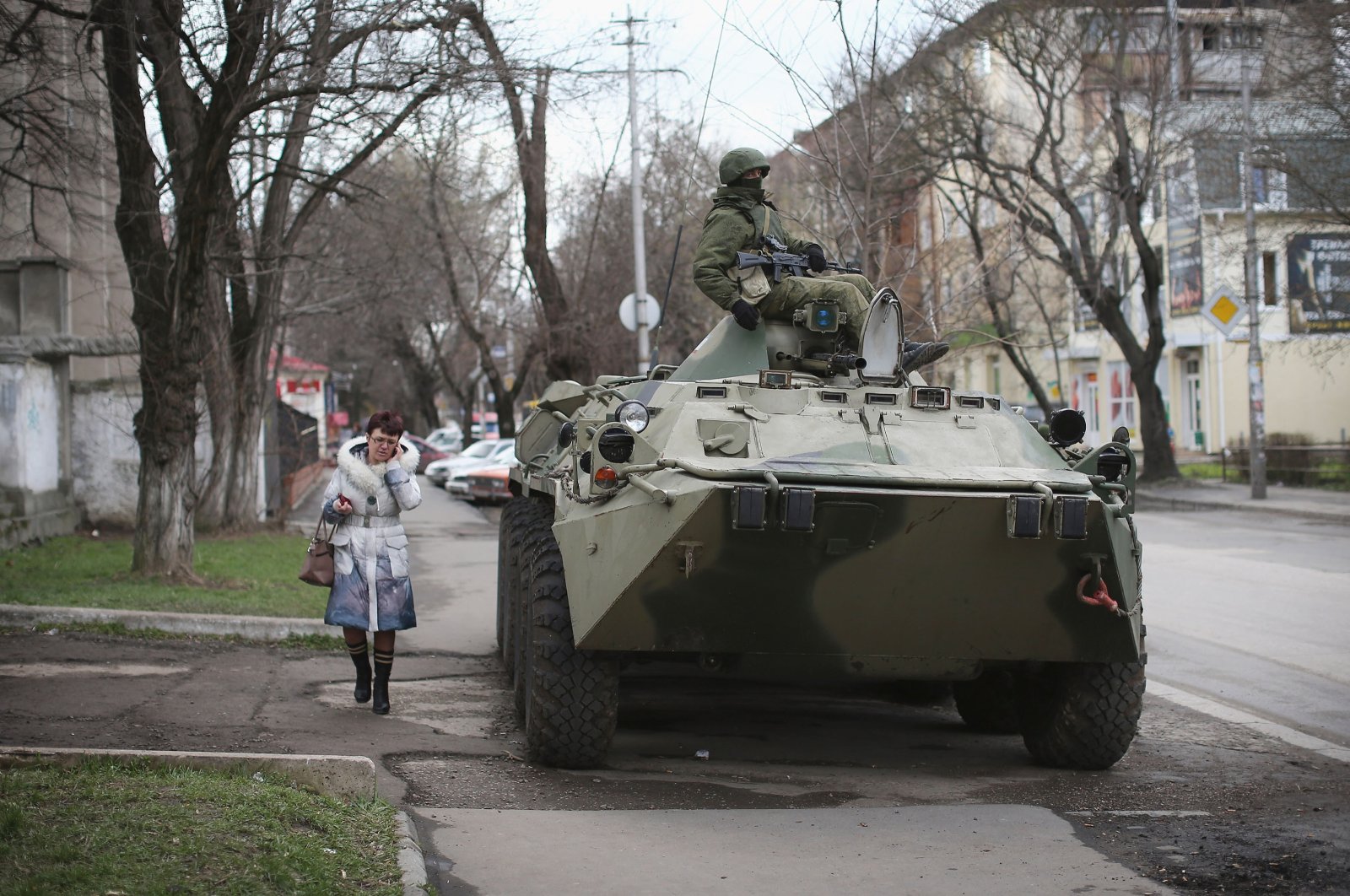 A woman walks past a Russian military personnel carrier outside a Ukrainian military base on March 18, 2014 in Simferopol, Ukraine. (Getty Images)
by DAILY SABAH WITH AA Sep 05, 2021 11:55 am
RECOMMENDED

In response to Russia's latest attempt of repression against Crimean Tatars, Turkey's Foreign Ministry said Saturday that Ankara is closely following the detention of the Crimean Tatar National Assembly's deputy chairman by Russian forces with "concern."

Foreign Ministry spokesperson Tanju Bilgiç said in a statement that they had received news that Nariman Dzhelyal, the deputy head of the Crimean Tatar National Assembly, has been "detained and taken to an unknown place following a raid on his house in Crimea" early on Saturday and that his whereabouts are yet unknown.

"We are following the developments with concern," Bilgiç said, adding that Turkey expects Dzhelyal and the four other Crimean Tatars arrested with him to "return to their homes and families as soon as possible."

Earlier on Saturday, President of the Crimean Tatar National Assembly Refat Chubarov said on social media that Dzhelyal was being held in the Russian Federal Security Service (FSB) building in Crimea after he was taken into custody at his home in the city of Akmescit.

"There are already 50 detainees in Crimea, relatives, friends, activists, including 2 civilian journalists, who came to the Russian Federal Security Service (FSB) building to enquire into the fate of 5 Crimean Tatars detained shortly before," Deputy Foreign Minister Emine Dzhaparova said on Twitter.

"Mass repression against Ukrainian citizens is an act of revenge for the Crimea Platform," Dzhaparova noted.

Dzhaparova said in an earlier statement that a recent series of arrests of Crimean Tatars by Russian authorities constitutes "another wave of repressions in the temporarily-occupied Crimea."

One of those abducted, Nariman Dzhelyal, is a Ukrainian Crimean Tatar politician, journalist, teacher, political scientist and "deputy chairman of the Mejlis of the Crimean Tatar People, banned by Russia in 2016," Dzhaparova noted.

During the summit, Foreign Minister Mevlüt Çavuşoğlu stated that Turkey has never recognized the illegal occupation of Crimea and will not recognize it, underlining that Ankara supports Ukraine's territorial integrity. He also called on the international community to act as one against the annexation of Crimea.

Turkey is one of the most active supporters of the Crimea issue on the international level, Ukraine's Deputy Foreign Minister Dzhaparova also said, expressing her hope that the Crimean Platform will strengthen global efforts for the liberation of the region.