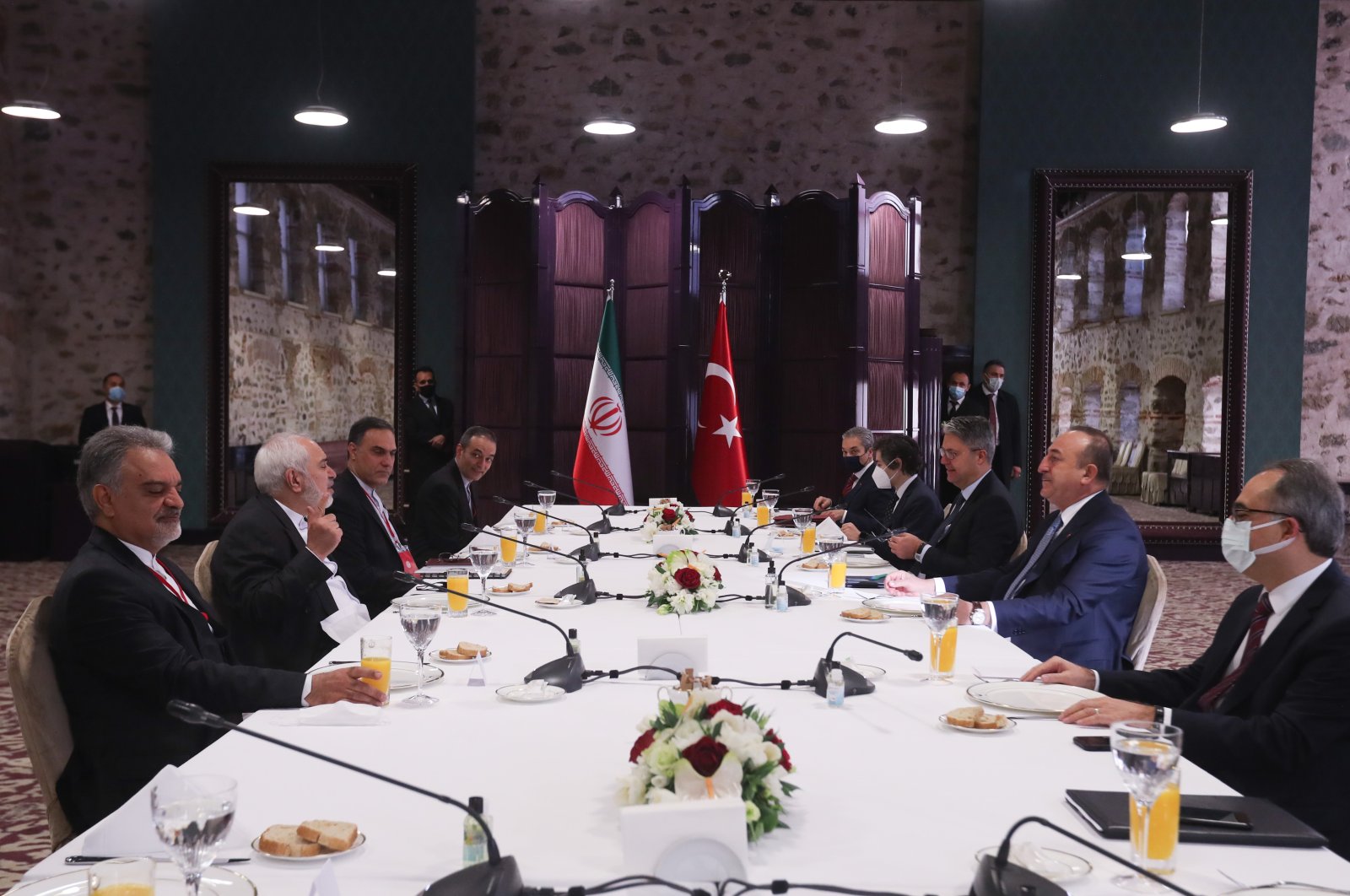 Foreign Minister Mevlüt Çavuşoğlu and his Iranian counterpart Javad Zarif reiterated Turkey and Iran’s commitment to cooperate to ensure stability and peace in the region, as they touched upon the set of mechanisms in this regard.

Speaking in a joint news conference after a bilateral meeting in Istanbul on Friday, Çavuşoğlu said Turkey has multiple diplomatic mechanisms with Iran, including the ones in the Caucasus and the Astana format for Syria.

“We are working on a mechanism with Afghanistan as well,” he said.

Noting that the two countries are located in a region “plagued by many problems,” Çavuşoğlu said they need to work to not only strengthen bilateral ties but also the strategic partnership.

Zarif also said relations between the two countries have survived “even in the hardest times.”

“These well-established relations will be sustained in the future as well,” Zarif said.

The Iranian top diplomat also said Ankara-Tehran cooperation in the Caucasus region would also benefit the people of the region to a great extent.

Regarding the new administration in the U.S., both ministers expressed hope that Biden returns to the nuclear deal, unilaterally abandoned by former U.S. President Donald Trump in 2018.

“Turkey hopes that the newly elected Biden administration in the U.S. will return to the nuclear agreement with Iran and withdraw sanctions on the Iranian people,” Çavuşoğlu said, while Zarif said they expect relations to flourish even further “with the U.S.' more constructive approach.”

The Iranian foreign minister noted that his country does not see nuclear weapons as a means of security, and on the contrary, they want all countries possessing such weapons to eliminate them.

Informally known as Iran nuclear deal, the Joint Comprehensive Plan of Action (JCPOA) was seen as a great step toward ensuring peace and stability in the Middle East when the P5+1 countries – the U.S., the U.K., France, China, Russia and Germany – along with the EU agreed to relieve sanctions imposed on Iran on the condition that the country curbs its nuclear capacity. After nearly three years, U.S. President Donald Trump announced on May 8 that his country would withdraw from the agreement, which took effect during the term of his predecessor Barack Obama. The U.S.' allies across the Atlantic – Germany, France and the U.K.– criticized Trump’s decision and they have been working on a special purpose vehicle (SPV) to facilitate the payments for the EU-Iran trade.

“These sanctions have no value for us. The U.S. has turned into a state that is accustomed to imposing sanctions recklessly,” he said.

In December, the U.S. imposed sanctions on Turkey’s Presidency of Defense Industries (SSB) and its chief Ismail Demir over the country’s purchase of S-400 missile defense systems from Russia.

It was the first time Washington deployed Countering America's Adversaries Through Sanctions Act (CAATSA) legislation against a NATO ally and came as Washington sought to discourage other countries including its Middle East partner Egypt from buying Russian military equipment.

Ankara has repeatedly stressed it was the U.S.’ refusal to sell Patriots that led it to seek other sellers, adding that Russia had offered a better deal, including technology transfers. Turkey even proposed setting up a commission to clarify any technical issues.

The U.S. sanctions on Turkey defused tensions between the two countries over a poem recited by President Recep Tayyip Erdoğan, who attended Azerbaijan’s victory parade on Dec. 10 to celebrate Nagorno-Karabakh victory. Iranian officials, including Zarif, were infuriated after Erdoğan recited a poem in the Azerbaijani language about the Aras River, which forms most of the boundary between Azerbaijan (in the larger Karabakh region and autonomous Nakhchivan exclave) and Iran, which houses a significant Azerbaijani-Turkic community mostly residing in the country's northwest.

Although welcomed by Azerbaijan and Turkey, the poem triggered historical disputes over the Aras River and the region in general, causing Iran to react harshly. Zarif claimed on Twitter that the poem “refers to the forcible separation of areas north of Aras from Iranian motherland," in reference to the Russian Empire's annexation of all southern Caucasus with the 1828 Treaty of Turkmenchay signed with Qajar Persia.