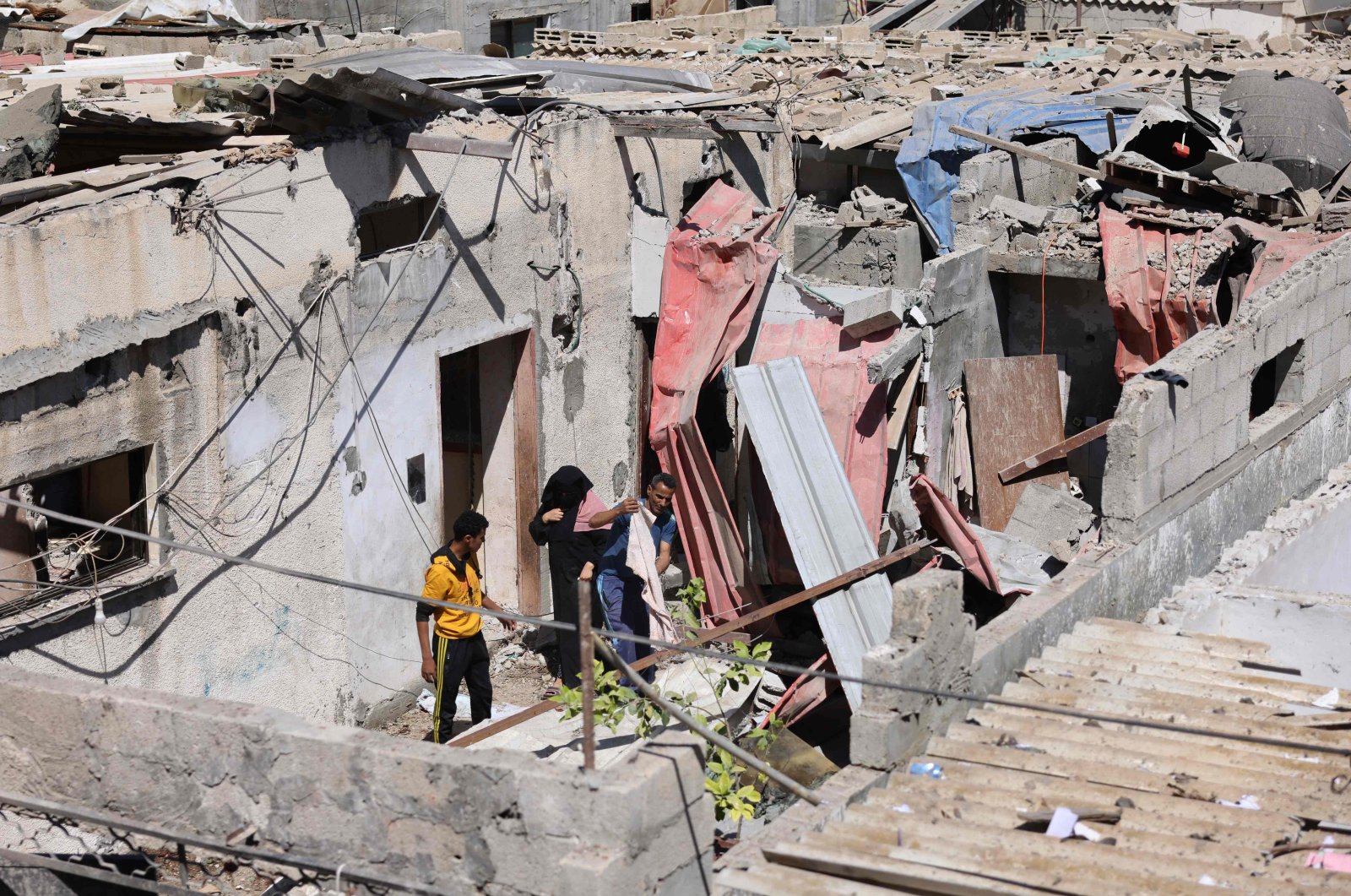 Palestinians check the aftermath of Israeli airstrikes in Rafah in the southern Gaza Strip, Palestine, May 19, 2021. (AFP Photo)
by DAILY SABAH WITH AA May 19, 2021 11:44 am
RECOMMENDED

"As of today, Israel has killed 61 children. Not terrorists, not soldiers. Children. Ethem et-Tanani is one of them. He was 4 years old. He will never wake up again. Will you?" Kalın said in a video published on Twitter.

Two more children have been killed since the video was posted.

He encouraged mentioning the names of children who were killed and said, "#SayTheirNames and pass it on."

At least 217 Palestinians have been killed, including 63 children and 36 women, and 1,500 others injured in Israeli attacks on the Gaza Strip since May 10, according to the Palestinian Health Ministry.

Recent tensions that started in East Jerusalem during the Muslim holy month of Ramadan spread to Gaza as a result of Israeli assaults on worshippers in the Al-Aqsa Mosque complex and Sheikh Jarrah neighborhood.

Since the beginning of the violence, Turkish officials have intensified diplomatic efforts to put an end to Israeli aggression against Palestinians.

"Discussed Israel's atrocities in Palestine, our relations and the Afghan peace process," Çavuşoğlu said on Twitter.

"Nothing can shake our resolve as we stand shoulder to shoulder with the people of Palestine in their legitimate right to self-determination & establishment of an independent state with pre-1967 borders and Al-Quds Al-Sharif as the capital," Qureshi said in a separate tweet.

Both Turkish and Pakistani leaderships have reached out to world leaders and international organizations in their efforts to protect the Palestinians.

Turkey's parliament speaker Tuesday also held a phone conversation with his Iranian counterpart on the issue of Palestine, repeating Turkey's position that "immediate and concrete steps" must be taken to halt Israeli attacks.

"As our president (Recep Tayyip Erdoğan) said, 'immediate and concrete steps must be taken to teach the occupier Israel a powerful and deterrent lesson.' The passive and contradictory attitude of the international community is a waste of time for the Palestinian people," Mustafa Şentop told Iran's Mohammad Bagher Ghalibaf.

Şentop underlined that Ankara would continue to stand firmly with the Palestinians "in their struggle for freedom and justice."

"We are making all manners of diplomatic efforts for Palestine," he added.

Ghalibaf, for his part, said that the recent incidents in Palestine were "unacceptable."

"All parliaments, all Muslims should take to the scene on the Palestine issue," he said.

Şentop urged his Burkinabe counterpart to mobilize the Parliamentary Union of the Organisation of Islamic Cooperation (OIC) and other parliamentary unions in which they hold membership "to react immediately to this issue."

Sakande, for his part, said they valued Turkey's active role on the Palestinian issue. "The efforts of Turkey and yourself on Palestine are very important," he added.