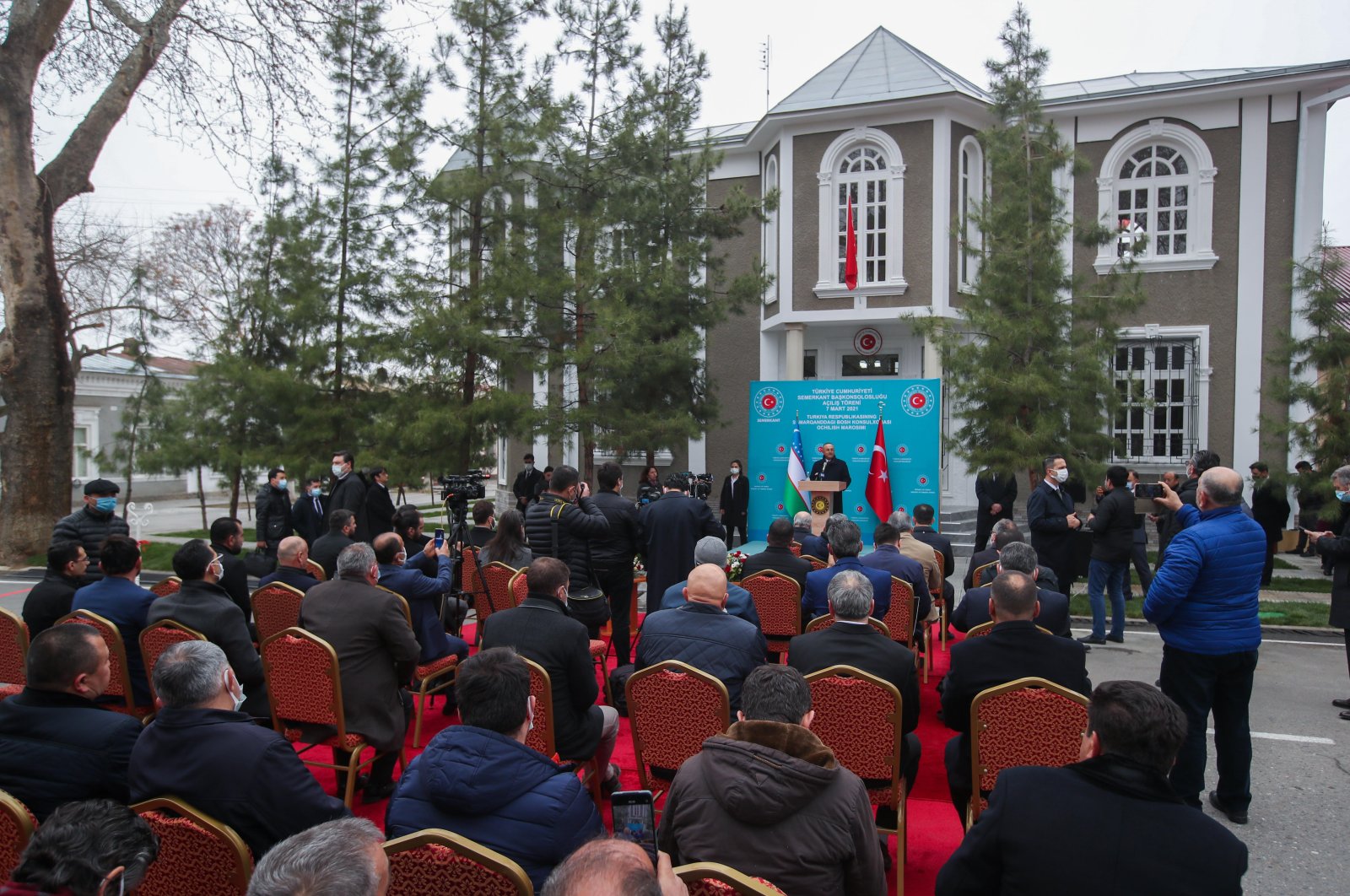 Foreign Minister Mevlüt Çavuşoğlu speaks at the inauguration ceremony of the new Turkish Consulate-General in the Uzbek city of Samarkand on Sunday, March 7, 2021 (AA Photo)
by Anadolu Agency
Mar 07, 2021 6:33 pm

Speaking at the inauguration ceremony, Çavuşoğlu said the consulate will be the new symbol of permanent fraternity with Turkey’s fatherland Uzbekistan.

The opening of the consulate general was announced jointly by Turkey’s President Recep Tayyip Erdoğan and his Uzbek counterpart Shavkat Mirziyoyev last year, he added.

He also said that although Turkey was the first to announce the decision of opening a consulate in Samarkand, Kazakhstan opened its consulate in the city a short while ago.

“Of course, each mission is important in Uzbekistan, but the opening of this mission in the ancient city of our civilization, Samarkand, is of great significance,” he added.

Noting that Samarkand was the center of the historical Silk Road and the meeting pointing of the tribes, Çavuşoğlu underlined that the city has started to become one of the attraction centers under the leadership of Mirziyoyev.

He also stressed that Turkey closely monitors the efforts of Governor Erkincan Turdimov to brand a new image for Samarkand, adding that Uzbekistan is also the homeland of scientists and Islamic scholars.

Çavuşoğlu said he will meet with his Uzbek counterpart Abdulaziz Kamilov on Monday in the capital Tashkent to exchange views on furthering the relations and prepare for the Second High-Level Strategic Cooperation Council Meeting.

Earlier in the day, Çavuşoğlu visited historical sites such as the Kalyan (Great) Minaret, and the Mir-i Arab Madrasa in the historical Bukhara city.

Çavuşoğlu will also be received by Mirziyoyev.

‘Meaningful to open consulate in Samarkand’

Speaking at the inauguration ceremony, Uzbekistan’s Foreign Minister Kamilov said: “It is very meaningful to open the Consulate General of Samarkand in 2021. I consider that this is Turkey’s gift to Uzbekistan that celebrates 30th anniversary.”

He also said the consulate will have a positive impact on the development of bilateral cooperation in the fields of culture and tourism, adding that the introduction of flights between Istanbul and Samarkand increased the number of people coming from Turkey to the city.

Turkey and Uzbekistan's defense ministers signed a military agreement last year and underlined their will to further cooperate in the fields of military, defense and security.