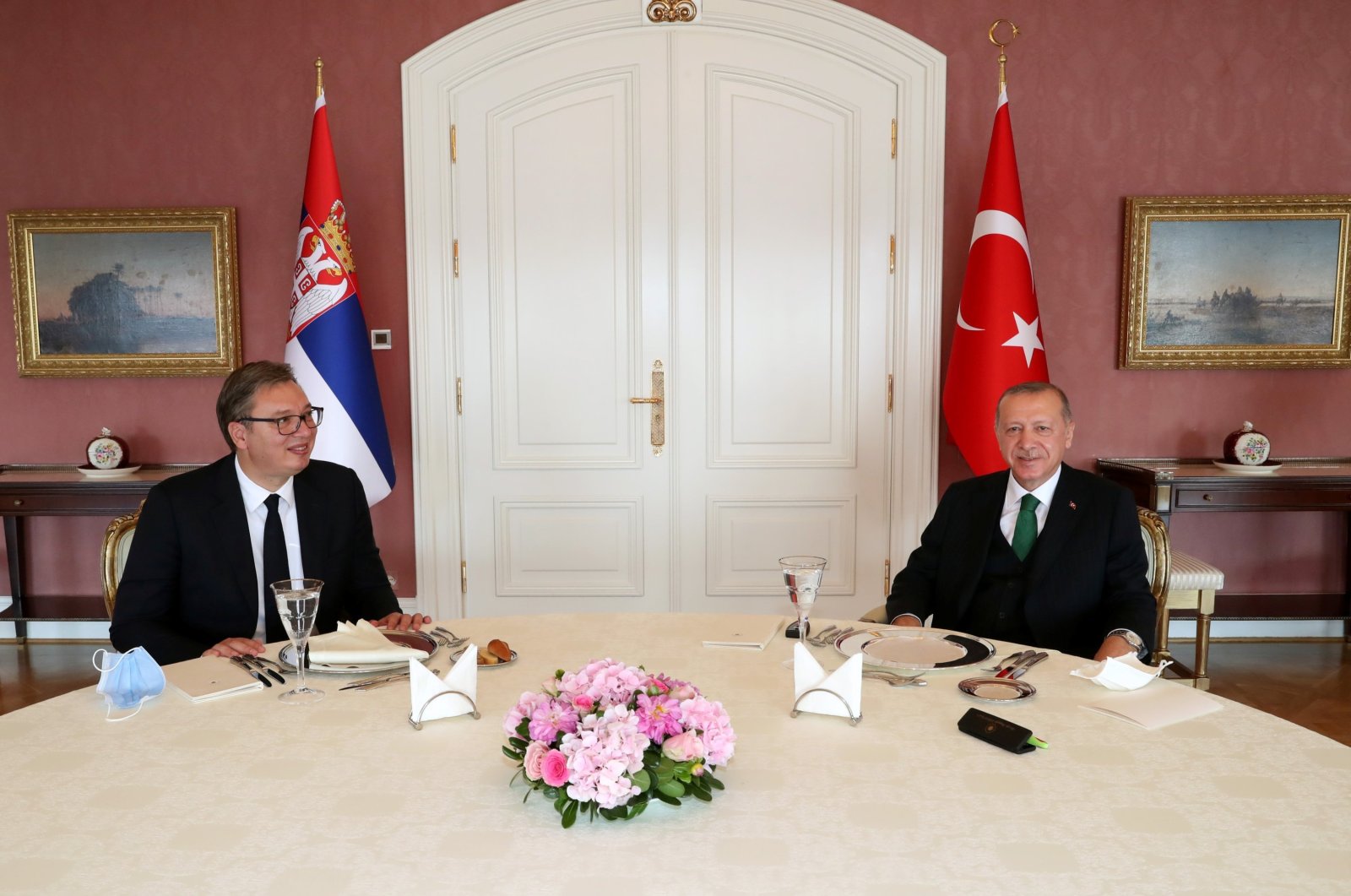 Speaking to Serbian Politika newspaper during his visit to the country, he evaluated Turkey-Serbia relations, developments in Afghanistan after the Taliban took control of the country and relations with the U.S. and Russia.

Underlining that relations with Serbia have been improving in every field, Çavuşoğlu said: "We are living in the best period of our history in terms of our bilateral relations. There is a sincere friendship between our President and the President of Serbia, Aleksandar Vucic. The visionary attitudes of the presidents of the two countries and the trust and friendship between them have a great role in reaching this level of our relations."

Reminding that a Memorandum of Understanding (MoU) was signed in order to develop cooperation between the two countries, Çavuşoğlu said: "We discussed our bilateral relations with all their dimensions. We evaluated regional developments. On this occasion, we will make the official opening of our Novi Pazar Consulate General together with my dear friend Nikola Selakovic. Thus, Turkey will be the first country to open a Consulate General in Novi Pazar. I believe that our Consulate General will make very positive contributions to our relations by strengthening the cultural and human ties between us."

Turkey's top diplomat highlighted the fact that peace, stability and welfare in the Balkans are very important. "Serbia is one of the key countries for peace and stability in Southeast Europe. We are pleased that our excellent relations with Serbia are contributing to regional peace and prosperity," he said.

Emphasizing that economic and commercial activities constitute the locomotive of relations, Çavuşoğlu said that the Free Trade Agreement (FTA), which was updated and came into force in 2019, provided a boost to the development of trade. He pointed out that the bilateral trade volume reached $1.5 billion (TL 12.46 billion) last year despite the pandemic, and that is could still reach this year's target of $2 billion. Çavuşoğlu then added, "Our medium-term goal is to reach the $5 billion target set by our Honorable Presidents."

Çavuşoğlu is visiting Serbia in an official capacity from Aug. 31 to Sept. 1 to discuss bilateral ties and to strengthen cooperation between the two countries, a statement by the Foreign Ministry said Monday.

"Besides discussing steps to further enhance cooperation and all dimensions of bilateral relations between the two countries, the meeting will also touch upon regional and international developments,” a statement by the ministry said.

He will also attend the inauguration ceremony of the Turkish Consulate in Novi Pazar.

Çavuşoğlu also touched upon the coming to power of the Taliban in Afghanistan. "There is a new reality in Afghanistan now. But now we must focus on establishing peace, tranquility and stability in Afghanistan. First of all, in order to protect the safety of life and property of the people, a vacuum of authority should not be allowed. In this framework, we desire the establishment of an inclusive government where all Afghans feel they belong. Taking lessons from past mistakes and acting with an inclusive understanding will contribute to the establishment of sustainable peace in Afghanistan," he explained.

Emphasizing that terrorist groups, especially al-Qaida and Daesh, should not find shelter in Afghanistan again, Çavuşoğlu said that it is important in this context to fulfill the commitments made by the Taliban.

Stating that the proliferation of terrorist groups in Afghanistan will have serious repercussions for regional stability, he added: "An unsafe environment can trigger a new wave of migration. Therefore, the international community should act in unity and solidarity regarding Afghanistan. Half of the population is in urgent need of humanitarian assistance. The international community needs to increase its aid and support efforts. It is imperative that the work of the U.N. and other aid organizations continue uninterrupted in order to deliver aid to the public."

Underlining that Turkey is ready to contribute to the establishment of an inclusive government and the establishment of an environment of peace and tranquility in Afghanistan, Çavuşoğlu said, "With these considerations, our Embassy in Kabul is expected to continue its activities. We are also negotiating to provide technical support to keep Kabul (Hamid Karzai International) airport open at the request of the Taliban."

The Taliban have guaranteed Turkey that the security of Afghanistan’s Kabul airport will be ensured, the group’s spokesperson, Zabihullah Mujahid, said Sunday after Turkey offered to provide security and run the airport itself.

Turkey has praised what it described as moderate statements by the Taliban since they captured Kabul on Aug. 15 and has said it is open to engaging with them once a new, inclusive government is formed.

Since 2002, the Turkish Armed Forces (TSK) have operated in Afghanistan under the United Nations, NATO and bilateral agreements to contribute to the peace, welfare and stability of the Afghan people. Turkey has been in Afghanistan in a noncombatant role for two decades and has been involved in consultancy efforts, reconstruction and maintenance. It has been operating the airport for six years. Turkey had more than 500 noncombatant troops stationed in Afghanistan as part of NATO’s now-abandoned mission in the war-torn country.

It had been negotiating with both the Taliban and Washington about playing a role in protecting the airport after the U.S. troop withdrawal, which was completed by the Aug. 31 deadline. But the Taliban’s swift capture of the Afghan capital changed Ankara’s plans.

After the Taliban seized control of the country Turkey offered technical and security assistance at the airport. Keeping the airport open after foreign forces hand over control is vital not just for Afghanistan to stay connected to the world but to maintain aid supplies and operations.

Turkish officials said that the Taliban have asked Turkey for technical help to run the Kabul airport after the departure of foreign forces but have insisted that Ankara’s military also withdraw fully by the end of the August deadline. Within this scope, Turkey Friday completed the evacuation of all Turkish personnel and all Turkish citizens who wished to leave Afghanistan, in less than 48 hours. The evacuation was completed days before the Taliban’s Aug. 31 deadline for foreign forces to leave the country.

Çavuşoğlu pointed out that bilateral relations with the United States have a rich potential for cooperation, although there are various differences of opinion today.

"It is clear that our interests overlap in important regional and global issues and that our multidimensional partnership is capable of making important contributions to the peace and stability of a wide geography, especially the Euro-Atlantic region, as in the past. In this respect, we aim to constructively and realistically address all issues on which we disagree, particularly the approach to terrorist organizations such as the PKK/PYD/YPG and FETÖ, and unilateral sanctions related to our S-400 procurement, and to develop our bilateral relations within the framework of our positive agenda," he said.

Ankara and Washington disagree on a number of issues that have further strained bilateral ties – from Turkey’s purchase of Russian S-400 air defense systems to U.S. support for the PKK's Syrian branch the YPG terrorist group, as well as the U.S.' refusal to extradite Fetullah Gülen, leader of the Gülenist Terror Group (FETÖ).

The PKK is a designated terrorist organization in the U.S., Turkey and the European Union, and Washington's support for its Syrian affiliate, the YPG, has been a major strain on bilateral relations with Ankara. The U.S. primarily partnered with the YPG in northeastern Syria in its fight against the Daesh terrorist group. On the other hand, Turkey strongly opposed the YPG's presence `in northern Syria. Ankara has long objected to the U.S.' support for the YPG, a group that poses a threat to Turkey and that terrorizes local people, destroying their homes and forcing them to flee.

Çavuşoğlu stated that relations with Russia also have an intense content at the bilateral and regional level, adding that they attach importance to keeping bilateral cooperation on a positive course on the basis of mutual respect.

Çavuşoğlu noted that Turkey is in dialogue with Russia on many regional issues, which are also important for Euro-Atlantic security. He emphasized that there are some different approaches on regional issues, but they try to find common ground and find solutions to problems through dialogue.

"We cooperate with all actors who will make a positive contribution to the solution of problems just beyond our border. Russia is an effective actor on the field in these regions. Making the constructive contribution of Russia is necessary for the solution of the problems in our region. Turkey's positive relations with Russia make significant contributions to international and regional security. We think this should be better understood," he said.