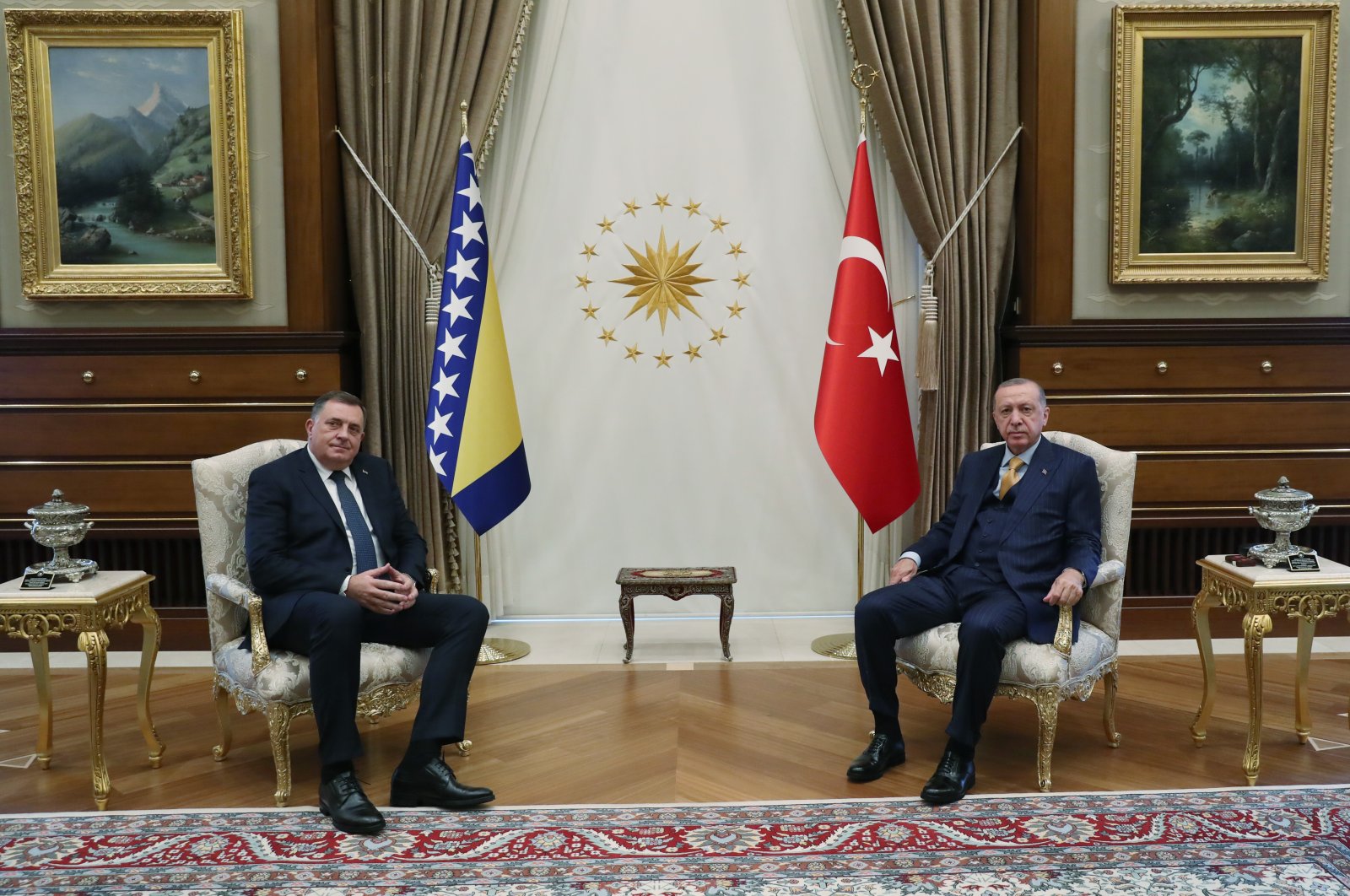 Turkey supports the Bosnian people and stands against any step that would unsettle them, said the chair of the Turkey-Bosnia-Herzegovina Inter-Parliamentary Friendship Group on Thursday in light of the recent political turmoil in the Balkan country.

Chair Refik Özen of the ruling Justice and Development Party (AK Party) evaluated the political crisis in the country while speaking to Anadolu Agency (AA) after the Serb member of Bosnia-Herzegovina's multi-ethnic presidency, Milorad Dodik, said that the Republika Srpska region would declare its independence if the Dayton peace agreement, which ended the 1992-1995 war, was not returned to its original form.

Stressing that Dodik's statements increased pressure in the Balkans, especially in Bosnia-Herzegovina, Özen said that President Recep Tayyip Erdoğan took serious initiatives to decrease the tensions in the country. Noting that Erdoğan met with representatives from Bosnian nongovernmental organizations (NGOs) in Turkey, Özen said: "We were also at that meeting. We had the opportunity to evaluate the thoughts and suggestions of our Bosniak brothers living in Turkey."

"Separatist rhetoric has seriously disturbed us. We had the opportunity to express once again that we stand by our Bosniak brothers in the future, as we have done so far," he added.

"As Turkey, we are trying to do our part in establishing and maintaining peace in the Balkans, especially in Bosnia-Herzegovina. In this sense, we expect these separatist rhetoric and politicians pursuing the dream of a 'Greater Serbia' to return to more prudent and reasonable explanations. We don't even want it to be thought otherwise. We never thought of any possibility other than peace. We wish that the approaches of international organizations, especially the United Nations, the United States, Russia and Serbia to this issue will be more effective. We believe that a gun, a bullet, that will explode here, will affect the whole geography and will not benefit anyone. Therefore, we hope that lessons can be learned from the painful experiences of the past," Özen explained.

Turkey has been taking diplomatic initiatives to de-escalate tensions in Bosnia-Herzegovina, just Sunday Erdoğan met with representatives from Bosnian NGOs in Istanbul. "We have provided support without any discrimination for the preservation and stabilization of Bosnia-Herzegovina's multicultural and ethnic identity," he said.

Highlighting that Turkey mobilized all its resources in support of Muslims during the Bosnian War, in which massacres and crimes against humanity took place, Erdoğan said his country will continue to stand by the Bosnian people "in a much stronger and different way."

He underlined that Turkey is closely following developments in the Balkans and views the region's problems as its own.

"We are taking the necessary steps to resolve the problems in the region," he said, adding Turkey will continue to work for the well-being of Bosnia-Herzegovina and the entire Balkans.

Also, Erdoğan Tuesday met with Dodik at the Presidential Complex in the capital Ankara.

Özen said that Turkey is trying to do its part to reduce tensions and return to normal as soon as possible. "I believe that sanity will prevail in a short time and the continuation of peace in the Balkans, especially in Bosnia-Herzegovina, will be established. As Turkey and the Turkish people, we stand by our Bosnian brothers and are against any step that will make them uneasy and set the region on fire. We will continue to pursue our diplomatic initiatives to mobilize international organizations," he stated.

Touching on the tripartite summit meetings that take place in Turkey from time to time, Özen added: "Our President is one of the rare leaders who can establish a positive dialogue with the three of them. If there is a need at this point in the coming days, it is possible to do this. We will continue to follow this process closely."

Bosnia-Herzegovina is currently in the throes of a political row between the Bosnians and Serbs living in the country. The dispute began after a former U.N. high representative for Bosnia-Herzegovina, Valentin Inzko, amended in July the country's criminal code to ban the denial of genocide and the glorification of war criminals. Bosnian Serb politicians said they would boycott state institutions in protest of the move.

Milorad Dodik, the Serb member of Bosnia-Herzegovina's joint presidency, denounced the amendments. "We will not live in a country where someone can impose a law by simply publishing it on his website," he said.

Dodik, who has rejected all legal changes enacted by the Office of the High Representative, said he would take radical steps in the army, judiciary and tax systems if the essence of the U.S.-brokered Dayton agreement that ended the war is not returned.

One of the major current issues in the country is a bill that Dodik recently pushed through the assembly of Republika Srpska that transfers powers of the nationally authorized Bosnia-Herzegovina pharmaceuticals and medical equipment agency to a new institution to be established in the region – a move critics say seeks to undermine the national government.

However, members of Bosnia-Herzegovina's collective presidency have offered assurances that there will be no repeat of ethnic clashes in the war-scarred nation, a senior United States diplomat said on Monday, despite deep tensions triggered by Bosnian Serb separatist moves.