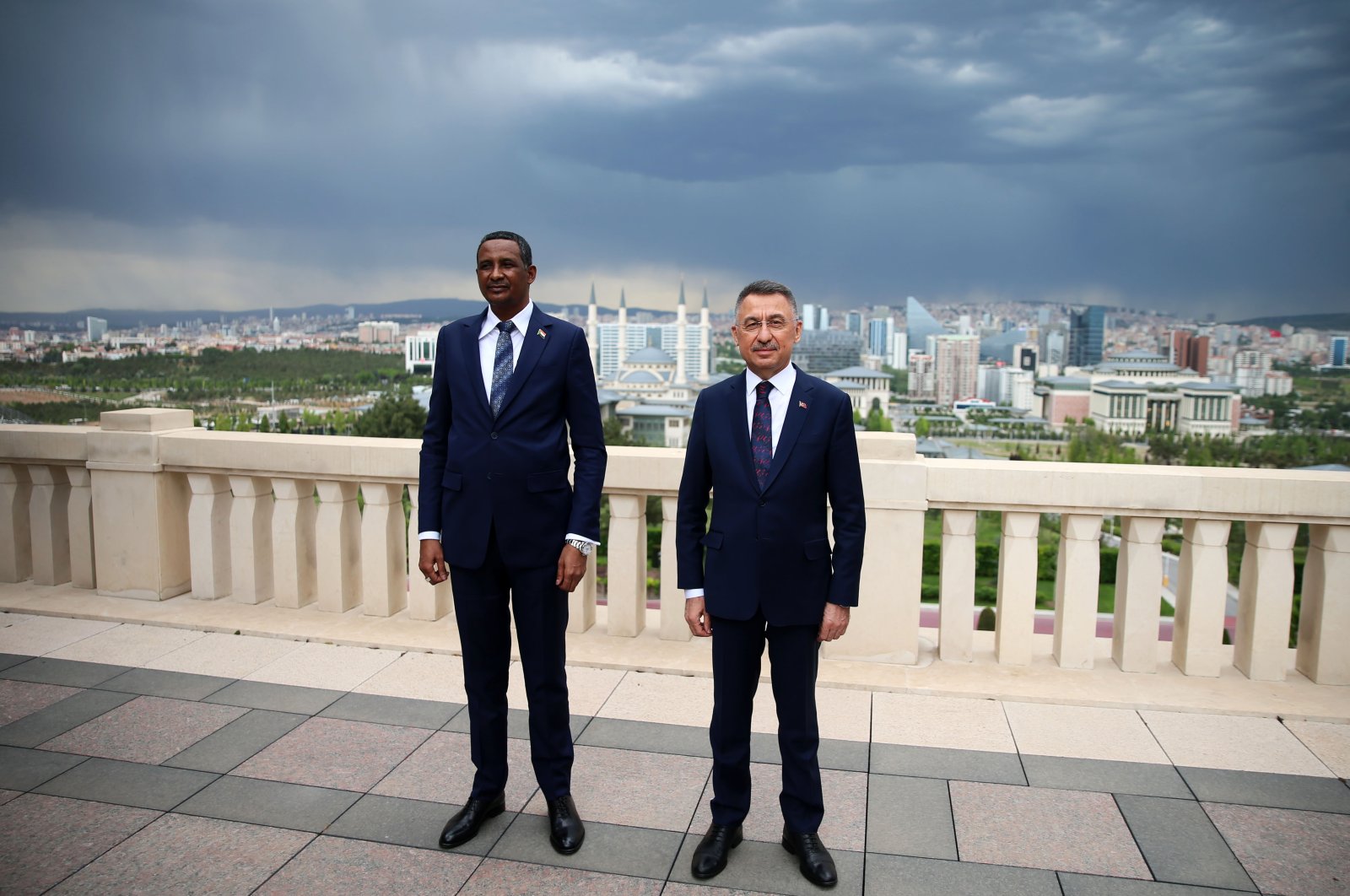 Turkey and Sudan on Thursday decided on taking strategic actions in the upcoming period including cooperation in the fields of agriculture, railways, mining, oil and electricity sectors.

Vice President Fuat Oktay said in a joint news conference with Mohamed Hamdan Dagalo, vice president of the Sudanese Transitional Sovereign Council, that Turkey will continue efforts both to contribute to the prosperity of the region and to add value to the development of Sudan with a win-win understanding.

They spoke to reporters in the Turkish capital Ankara following a meeting between delegations from both sides. The Sudanese delegation arrived in Turkey Thursday on a two-day official visit.

During the meeting, all aspects of Turkey-Sudan relations were discussed, Oktay said, adding that wide opportunities for bilateral cooperation were evaluated as well.

"At the 15th Joint Economic Commission meeting in 2018, we took concrete decisions and implemented a wide range of actions, from transport to agriculture, from finance to energy and from education to culture and tourism," the Turkish vice president said, adding: "Despite the transition period in Sudan and the COVID-19 epidemic, we have progressed in the direction of our goals."

"At our meeting today, we agreed to continue our cooperation and relations strongly within the framework of the previously reached agreements," he noted.

"We believe that with the implementation of the Turkey-Sudan Trade and Economic Partnership Agreement we signed in 2018, our bilateral trade will move to much higher levels," he said.

He stated that Turkey has provided Sudan with market opening for agricultural products, which it does not provide in most of the existing free trade agreements, and added: "This will allow Sudan to open its domestic market to the world after the transition process."

He said Turkey will continue all of its objectives for cooperation within the framework of a comprehensive "Turkey-Sudan Action Plan."

"With the opening of Turkish Ziraat Participation Bank's Khartoum branch in 2020, an important step was taken to support our trade and investment relations. Sudan Ziraat Participation Bank, the first Turkish bank to be opened on the African continent, will continue to be the only institution where entrepreneurs of the two countries transact safely and receive support."

The Nyala-Turkey Sudan Education and Research Hospital in Darfur, built and operated with the support of Turkey, has treated thousands of Sudanese so far, Oktay said, noting that the hospital became even more important during the pandemic.

"Being beside Sudan in the fight against the epidemic, we delivered the most critical medical supplies and respirators to Sudan through our Health Ministry, the Turkish Red Crescent (Kızılay), TIKA (the Turkish International Cooperation and Development Agency) and some other Turkish nongovernmental organizations (NGOs).

"We will continue to stand by Sudan in the field of health through work such as the operation of Sudan Merowe Hospital by our Health Ministry, the training of health workers and medical supplies support," Oktay said.

Dagalo, for his part, praised the Turkish nation and the government for always supporting Sudan on every platform and standing by them in challenging times and crises.

Stating that his visit is the start of many others in the future, he said they had a "fruitful meeting" with Oktay.

Sudan is going through an exceptional period, he said, adding that despite the challenging conditions, they achieved to establish peace in the country.

"Therefore, we made progress with the support of the international community, the U.S. and the countries that stand by Sudan, and with our efforts.

"As one of them, Sudan was removed from the list of countries supporting terrorism," Dagalo said.

Highlighting his country's rich resources, Dagalo said it has not reached the desired level.

The Sudanese government signed a peace agreement last year with opposition groups except for two rebel movements – one in the western region of Darfur known as the Sudan Liberation Movement/Army, and the Sudan Popular Liberation Movement-North (SPLM-N) from the south in the Nuba mountains region.

The armed opposition SPLM-N rejected the deal because it demanded Sudan do away with Shariah law and become a secular, democratic state.

But in March, the government and the SPLM-N signed a road map for peace talks and agreed to separate religion from the state. Peace talks between the two sides just began on Wednesday.

Dagalo also noted that they will revise and modernize already existing agreements, which were signed between Turkey and the former Sudanese government but not implemented.

"We desire to realize these agreements on a mutual win-win basis," he said.

Turkey wants to see Sudan standing tall on its own feet and making use of its rich resources, Oktay underlined.

"We don't want to see Sudan in the middle of proxy wars and as a country that cannot realize its potential, but as a country that assesses its rich resources in the best way ... and that stands strongly on its own feet," Oktay said.

On the U.S. decision to remove Sudan from the list of countries that support terrorism, Oktay said it is "a belated step but a step in the right direction."

"We are also pleased that the financial and economic sanctions and restrictions that Sudan has been unfairly subjected to for years have been lifted recently," he added.

Oktay expressed hope that the existing disputes that pose a threat to peace and stability in the Horn of Africa region are resolved through dialogue and reconciliation, saying they also discussed the al-Fascaga conflict between Sudan and Ethiopia.

"We will continue our efforts both to contribute to the prosperity of the region and to add value to the development of the friendly and brotherly country of Sudan with a win-win understanding," he said.