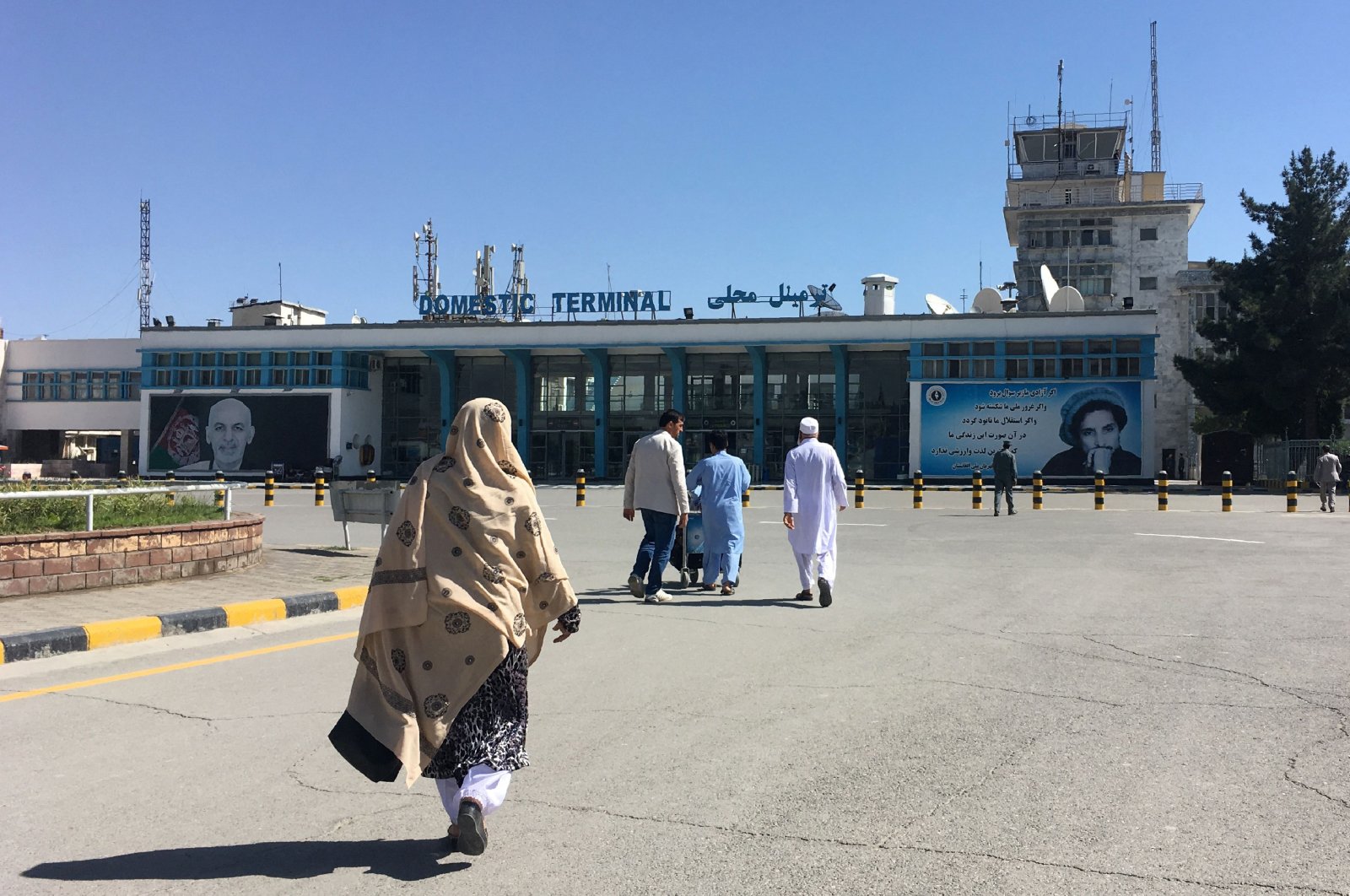 People arrive at the domestic terminal of the Hamid Karzai International Airport in Kabul, Afghanistan, May 8, 2018. (AFP Photo)
by Daily Sabah with AFP Jul 02, 2021 10:31 am
RECOMMENDED

A decision is yet to be reached on the Turkish mission to operate and secure Afghanistan's Kabul Hamid Karzai International Airport, Defense Minister Hulusi Akar said Friday, adding that contact between Turkey and the United States on the issue will continue.

Turkey, whose forces in Afghanistan have always comprised of noncombatant troops, has offered to guard and run Hamid Karzai airport after NATO's withdrawal. It has been holding talks with the U.S. on logistic and financial support for the mission, as questions remain on how security will be assured along major transport routes and at the airport, which is the main gateway to the capital, Kabul.

A delegation of U.S. State Department and Pentagon officials arrived in Ankara last week to discuss progress on efforts to keep Hamid Karzai International Airport in Kabul operational after the U.S. troop pullout, set to conclude by Sept. 11.

Contact between Turkey and the U.S. over the security of Kabul's international airport after the U.S. pullout will continue, Akar said.

"No decision has been reached at the moment," he told reporters after his visit to Kyrgyzstan and Tajikistan.

"We will discuss the outcome of the talks at a meeting chaired by our president. And we will put the plan into effect after the president's approval," he said.

Mentioning how President Recep Tayyip Erdoğan underlined that certain conditions must be met for Turkish troops to stay for the airport in the Afghan capital, Akar said: "We said we can stay if these conditions are met."

"In this regard, our contacts with several countries continue," he said. "We continue contacts for some political decisions to be taken by the United Nations and NATO, to reach an agreement with the Afghan government, and for political, financial, and logistical support from certain countries."

Turkey has also said as the airport is an international concern, there must be foreign financial support for its security.

Stressing that Afghanistan is a "sister" country for Turkey, Akar said Turkey will continue to do whatever it can to ensure Afghans' peace, stability, and security.

“The airport must be open and operate. If the airport doesn’t work, embassies will pull out, and in such a situation, Afghanistan would become an isolated state,” Akar added.

Another statement by Pentagon said this week that some American troops will remain in Afghanistan to protect the U.S. diplomatic presence, adding that they are still working on the details of how to secure the Kabul airport following the withdrawal of NATO forces amid the ongoing talks with Turkey about the mission.

The situation in Afghanistan heated up after U.S. President Joe Biden announced that all American forces will withdraw from the war-torn country by Sept. 11, with NATO allies doing the same.Biden and Erdoğan discussed the issue at a recent NATO leaders' summit in Brussels.

Turkey will likely run and guard Kabul Hamid Karzai International Airport in Afghanistan if the necessary conditions are met, Turkish Defense Minister Hulusi Akar had said last week, adding that no additional personnel is to be sent there.

U.S. National Security Adviser Jake Sullivan recently said that Biden and Erdoğan agreed in a meeting at the NATO summit that Turkey would play a lead role in securing Kabul airport after the NATO withdrawal.

Ankara has been running the military and logistic operations of the Kabul airport for the last six years as part of the NATO-led Resolute Support Mission.

An agreement on the protection of the airport has become increasingly urgent as the final withdrawal of the remaining 2,500-3,500 U.S. troops and 76,000 allied NATO soldiers near a conclusion. The airfield had been the epicenter of the countrywide military operation to defeat the Taliban and hunt down al-Qaida perpetrators of the 9/11 terrorist attacks on the United States.

Most recently, all U.S. and NATO troops have left the biggest air base in Afghanistan, a U.S. defense official told Agence France-Presse (AFP) Friday, signaling the complete withdrawal of foreign forces from the country was imminent after two decades of war.

Bagram Airfield served as the linchpin for U.S. operations in the rugged country, where the long war against the Taliban and their al-Qaida allies was fought with airstrikes and resupply missions from the airfield.

"All coalition forces are off Bagram," said the official – who asked not to be identified – without specifying when the last foreign troops left the base, 50 kilometers (30 miles) north of the capital Kabul.

He did not say when it would be officially handed over to Afghan forces, but the ministry of defense spokesperson Rohullah Ahmadzai said government authorities were "fully prepared" to take over the base.

The U.S. military and NATO are in the final stages of winding up involvement in Afghanistan, bringing home an unspecified number of remaining troops by a deadline of Sept. 11.

The Taliban have launched relentless offensives across Afghanistan in the past two months, gobbling up dozens of districts as Afghan security forces have largely consolidated their power in the country's major urban areas.

The ability of Afghan forces to maintain control of the Bagram Airfield will likely prove pivotal to maintaining security in Kabul and keeping pressure on the Taliban.

Media reports say the Pentagon will probably retain about 600 U.S. troops in Afghanistan to guard the vast U.S. diplomatic compound in Kabul.

Bagram was built by the U.S. for its Afghan ally during the Cold War in the 1950s as a bulwark against the Soviet Union in the north.

Ironically, it became the staging point for the Soviet invasion of the country in 1979, and the Red Army expanded it significantly during its nearly decadelong occupation.

When Moscow pulled out, Bagram became central to the raging civil war – it was reported that at one point the Taliban controlled one end of the 3-kilometer (2-mile) runway and the opposition Northern Alliance the other.

In recent months, Bagram has come under rocket barrages claimed by the extremists, stirring fears that militants are already eyeing the base for future attacks.

So far, Germany and Italy have both confirmed the full withdrawal of their contingents.