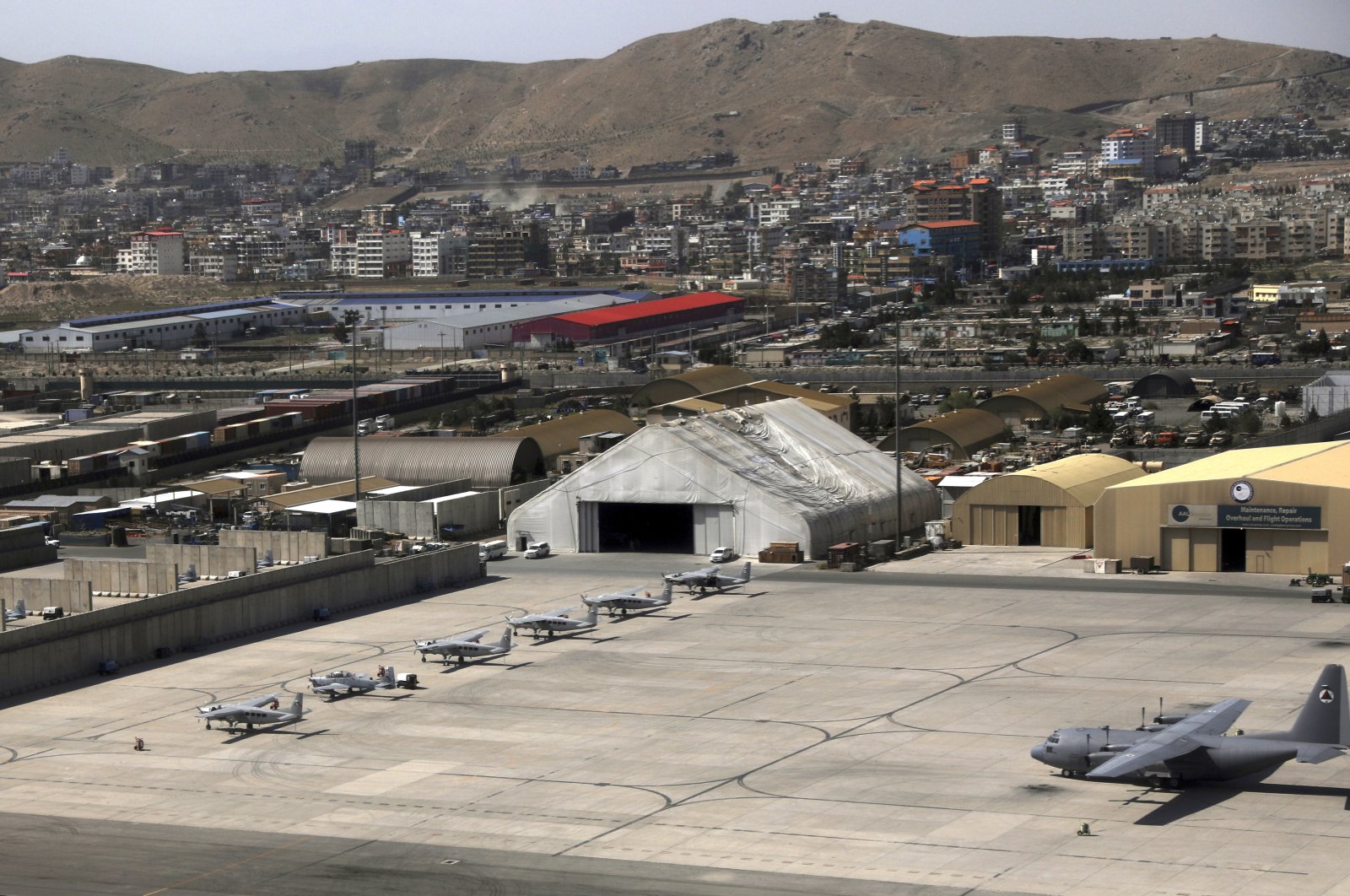 A side of Kabul Military Airport where AC 208 combat caravan aircraft are parked is seen from a commercial airplane, Afghanistan, July 7, 2021. (AP Photo)
by DAILY SABAH WITH AGENCIES Jul 08, 2021 11:26 pm
RECOMMENDED

Turkish Defense Minister Hulusi Akar and his U.S. counterpart Lloyd James Austin on Thursday held talks for a second straight day to discuss developments regarding the operation and guarding of the Kabul airport after the NATO withdrawal from Afghanistan, the ministry said.

Ankara has offered to run and guard the airport after NATO’s withdrawal this summer and has been in talks with allies, namely the United States, on financial, political and logistical support.

Security of the airport is key for the operations of diplomatic missions out of Afghanistan after the withdrawal.

“We will continue our effort to provide the necessary support for the uninterrupted operation of Hamid Karzai International Airport with our elements after the termination of the Resolute Support Mission for the security and welfare of our brothers and sisters of Afghanistan,” read a statement by the National Defense Ministry.

Turkey, whose forces in Afghanistan have always comprised of noncombatant troops, has been in Afghanistan for two decades and has been running the airport’s operation for six years.

The ministry said the facility was Afghanistan’s only gateway to the world and was of “critical importance for the security, peace and welfare of the Afghan people.”

The phone call on Thursday followed what the Defense Ministry said was a “constructive and positive meeting” between Akar and Austin on Wednesday.

The Pentagon said in a statement that Austin and Akar had discussed the drawdown of the U.S. forces from Afghanistan and both “reasserted the importance of adequate security” at the airport.

The situation in Afghanistan heated up after U.S. President Joe Biden announced that all American forces will withdraw from the war-torn country, with NATO allies following suit.

Turkey has more than 500 soldiers in Afghanistan as part of NATO’s mission to train Afghan security forces. Some of these soldiers still serve at the airport.

Biden on Thursday set a target date of Aug. 31 for the final withdrawal of the U.S. forces, minus about 650 troops to provide security for the U.S. Embassy in Kabul.

The U.S. earlier this week vacated Bagram Airfield – its epicenter of the conflict to oust the Taliban and hunt down the al-Qaida perpetrators of the 2001 terrorist attacks on the U.S. that triggered the war. The Pentagon says the withdrawal of U.S. forces is 90% complete.

Biden’s order in April to pull out U.S. forces by Sept. 11 after 20 years of conflict has coincided with major gains by the Taliban movement against overwhelmed Afghan forces after peace talks sputtered.

Taliban fighters seized control on Thursday of a district in western Afghanistan that includes a major border crossing with Iran, Afghan security officials said, as they continued their rapid military advances around the country.

Biden said he did not trust the Taliban but trusted the capacity of the Afghan military to defend the government.

The president said it was “highly unlikely” that one government will control Afghanistan after the U.S. pullout and urged the Afghan government to reach a deal with the Taliban.

He added that there is no “mission accomplished” moment as the U.S. war comes to an end.