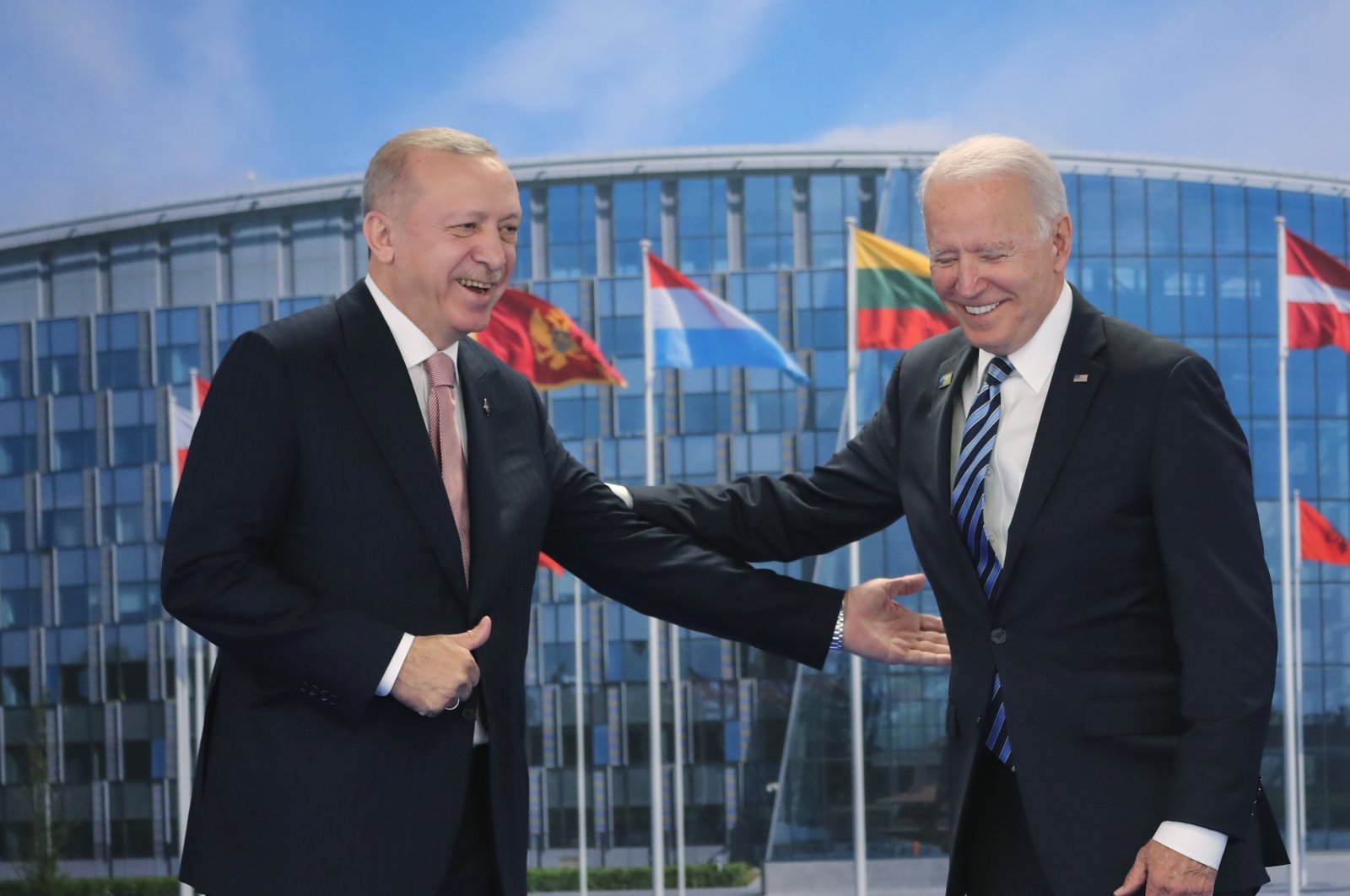 Following their crucial meeting on the sidelines of the NATO Leaders Summit, the presidents of Turkey and the United States confirmed their willingness to restore strained ties and increase cooperation.

"In our meeting with Mr. Biden, we constructively handled issues that we differ on as well as areas of cooperation. We agreed to keep Turkey-U.S. dialogue channels open just like how strategic partners and allies do," President Recep Tayyip Erdoğan said late Monday after meeting with his U.S. counterpart Joe Biden in a closed-door meeting earlier in the day during the NATO summit in Brussels.

"We are going to increase our cooperation with the U.S. There is no problem between us that cannot be solved," the president told a press conference.

"We believe that cooperation between the U.S. and Turkey will contribute to regional security," he said.

Erdoğan also said that "a strong will" is evident for the beginning of an efficient period of cooperation in Turkey-U.S. relations, "based on mutual respect and interests in every field."

For his part, Biden said the meeting with Erdoğan was "positive."

"Our two countries have big agendas. Our teams will continue discussions and I'm confident we will make real progress between the U.S. and Turkey."

In his press conference, Erdoğan also touched upon Afghanistan and the Turkish proposal to run Kabul airport following the departure of U.S. troops on Sept. 11.

"The U.S.' diplomatic, logistical and financial support is important in the case of a sustained Turkish presence in Afghanistan. We also conveyed to President Biden our desire to work alongside Pakistan and Hungary," he said.

"We conveyed Turkey's expectations and grievances to our counterparts," Erdoğan also added with regards to the fight against terrorism.

"There should be no double standards in anti-terror efforts and it should be known that one terrorist group cannot be defeated with another," Erdoğan added, pointing to U.S. support of the PKK terrorist group's Syrian wing the YPG.

"Turkey is the only NATO country that fought against Daesh terror on the ground," he said.

"In addition, YPG terrorists just killed 14 innocent civilians in their attacks against the Shifa Hospital in Idlib. This should tell (you) a story about the nature of PKK/YPG terrorists too."

"Our expectation is that our allies cut their support to those terrorists," he concluded.

Erdoğan announced no progress on the ongoing S-400 dispute between Ankara and Washington, which imposed sanctions on Turkey's military procurement agency for the purchase last year.

It also expelled Turkey from the F-35 program under which Western allies produce the next-generation fighter jet's parts and secure its early purchasing rights.

"I raised the issue of F-35s," he added, signaling that he wanted Turkey admitted back into the program.

"I told him what joint steps we can take on the defense industry."

Their one-on-one meeting lasted 45 minutes, after which Turkish and U.S. delegations held a joint meeting.

The NATO summit, gathering heads of member states and governments, began Monday in Brussels. Leaders have been holding bilateral meetings on the sidelines of the summit.

According to NATO, the summit is being held to respond to the challenges "of today and tomorrow," which include terrorism, cyberattacks, disruptive technologies and the security implications of climate change. The NATO 2030 initiative to "continue adapting" the alliance is at the heart of the summit.

While Erdoğan also held bilateral meetings with other NATO leaders on the sidelines of the summit, the meeting with Biden came to the forefront, as it was the first face-to-face interaction between the two since the latter's election as president.

A positive agenda is prioritized for the upcoming meeting between Erdoğan and Biden, with potential areas of cooperation and opportunities expected to dominate talks in addition to discussions about ongoing disagreements. Biden and Erdoğan were expected to discuss a range of issues including Syria, Afghanistan, the Eastern Mediterranean and the S-400s issue on the sidelines of the NATO summit in Brussels Monday.

The meeting comes against the backdrop of a fair amount of tension between the two countries. Although NATO allies Turkey and the U.S. have voiced interest in resetting recently strained ties, disagreements on several points remain, and sources have pointed out that political cooperation is the key to progress.

Turkey approached the upcoming meeting between Erdoğan and Biden with a positive agenda, Turkish Foreign Minister Mevlüt Çavuşoğlu said last week, adding that Ankara has received similar optimistic signals from Washington. Çavuşoğlu noted that the U.S. wants to cooperate with Turkey not only on the issues of Libya and Syria, but also in many areas from the Mediterranean to the Black Sea and the Caucasus regions.

Biden is also looking forward to reviewing the "full breadth" of Ankara-Washington ties, as he and Erdoğan were scheduled to discuss Syria, Afghanistan and other regional issues, the U.S.' national security adviser said last week, underlining that the two leaders will also look at the "significant differences" between the two NATO allies.