Turkey, US to form joint working group on disagreements 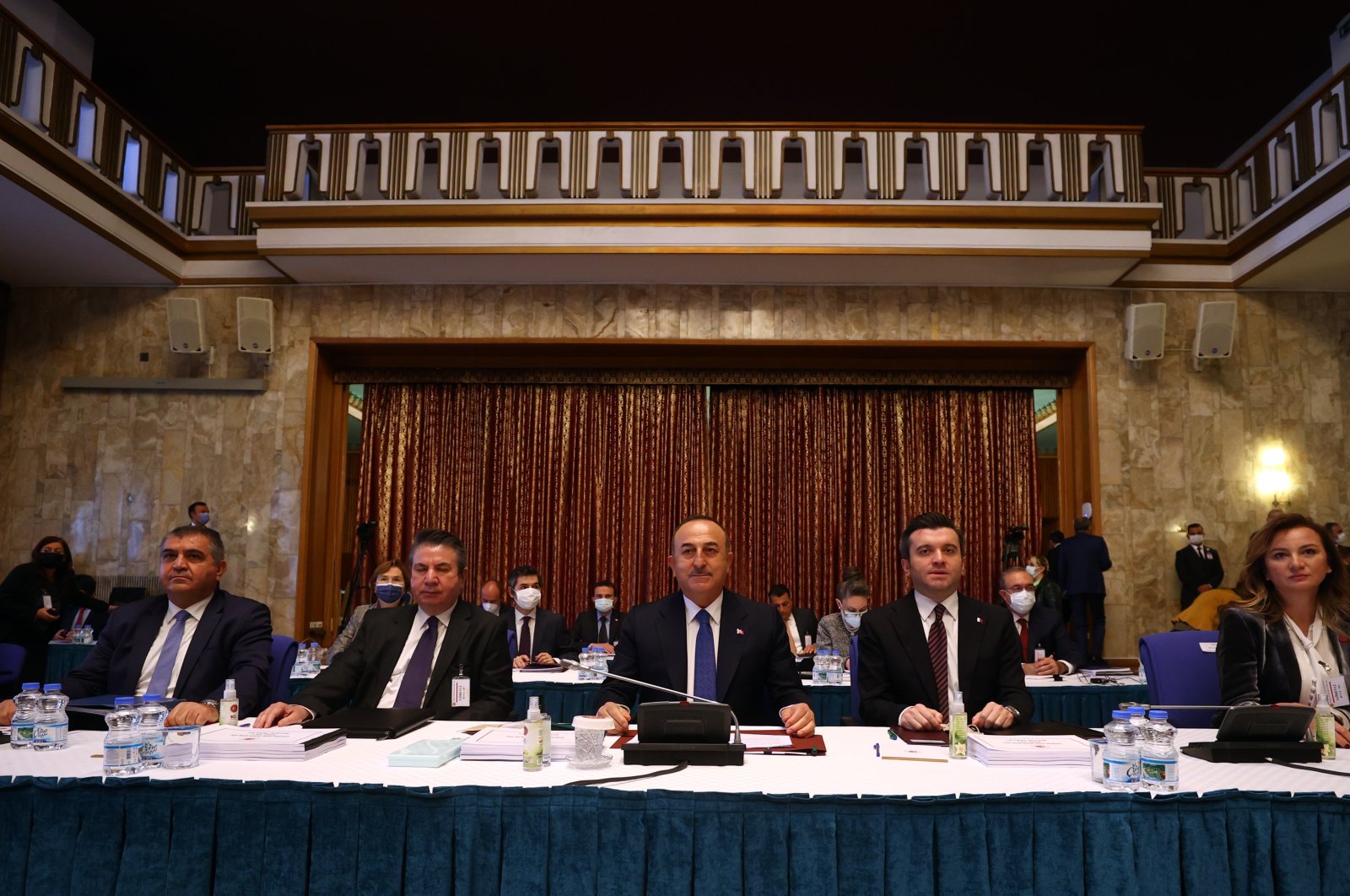 Turkey and the United States will establish a joint working group on disagreements, including the issues of the PKK terrorist group's Syrian branch YPG, the Gülenist Terror Group (FETÖ) and the Russian-made advanced S-400 defense system, Foreign Minister Mevlüt Çavuşoğlu said Thursday. He underlined that the proposal came from Washington.

Çavuşoğlu presented the 2022 budget of the Foreign Ministry and related institutions at the Planning and Budget Committee of the Grand National Assembly of Turkey (TBMM).

Stating that Turkey maintains its contact with the U.S. administration, Çavuşoğlu said that the recent meeting between President Recep Tayyip Erdoğan and U.S. President Joe Biden last Sunday was in a constructive atmosphere.

Çavuşoğlu said that the U.S. cooperation with the PKK/YPG, FETÖ's presence in the U.S. and its stance on the S-400-related sanctions are incompatible with the spirit of alliance.

"Our president clearly emphasized these at this meeting. We will set up a working group to address these issues. We have said before that we made such an offer to the United States, and now this offer has come from the United States, from Biden."

Çavuşoğlu also stated that institutions and ministries related to the formation of the working group and the issues to be discussed are carrying out studies.

Erdoğan and Biden met on the sidelines of the G-20 summit in Rome on Sunday and expressed their joint desire to strengthen bilateral relations that have been strained as of late, agreeing to establish a joint mechanism in this direction.

Releasing a statement after the 70-minute meeting, Turkey's Presidential Communications Directorate said the exchange took place in a positive atmosphere and that bilateral relations and regional issues were discussed. During the meeting, the two leaders declared a shared will to further strengthen and develop Turkey-U.S. relations and agreed to establish a joint mechanism in this direction.

Biden has shown a "positive attitude" toward Turkey's purchase and modernization of F-16 fighter jets, Erdoğan also said during a press conference at the G-20 summit in Rome on Sunday.

The White House said that Biden underscored his desire to maintain constructive relations with Turkey during the meeting with Erdoğan.

"President Biden reaffirmed our defense partnership and Turkey's importance as a NATO ally, but noted U.S. concerns over Turkey’s possession of the Russian S-400 missile system," the White House said in a statement after the meeting.

The U.S. is discussing ways for Turkey to buy F-16 fighters after a deal for the more advanced F-35s was scrapped due to Ankara’s purchase of a Russian missile system. Erdoğan said on Oct. 17 that Ankara wants to buy the cheaper F-16s using the $1.4 billion (TL 13.45 billion) it allotted for the F-35 fighter jet program. Erdoğan has said Washington offered Ankara a package of F-16 jets and modernization kits in exchange for the payment.

But one U.S. official said that any possible F-16 order could be dogged by the same issue that forced the cancellation of the F-35s: Turkey’s decision to buy an S-400 missile system from Russia. Turkey has been indicating that Ankara still intends to buy a second batch of S-400s from Russia, despite opposition from the U.S. Turkey reportedly made a request to the U.S. to buy 40 Lockheed Martin-made F-16 fighter jets and nearly 80 modernization kits for its existing warplanes. The deal is potentially worth $6 billion.

In 2002, Turkey joined several other NATO allies who agreed to buy the F-35, and five years later reached a deal to participate in its production, an agreement worth potentially billions of dollars to Turkish industry. As it was preparing to receive the first two of 100 aircrafts planned for its air force, Ankara in 2017 announced it was buying an S-400 battery. One week after the Turkish Ministry of Defense received the first delivery of S-400 components in July 2019, Washington announced the cancellation of Turkey’s F-35 program.

Washington argued that the S-400 could be used by Russia to covertly obtain classified details on the F-35 jets and that they are incompatible with NATO systems. Turkey, however, insisted that the system would not be integrated into NATO systems and would not pose a threat to the alliance. Five months later, Washington imposed sanctions on Turkey’s Presidency of Defense Industries (SSB), which is in charge of defense technology imports, its chief Ismail Demir and three other employees.

Delegations from the Turkish and U.S. defense ministries are planning to hold a second meeting in Washington on the F-35 fighter jet issue in the following months, Turkish Defense Ministry sources said this week.

The decades-old partnership between the two NATO allies, Turkey and the U.S., has gone through unprecedented tumult in the past five years over disagreements on many issues, including Syria and Ankara’s closer ties with Moscow. There are additional sources of strain for the two countries, including the U.S. support for the YPG, whom Turkey considers terrorists; and the continued U.S. residency of FETÖ figures including its head Fethullah Gülen, who plotted the failed coup attempt against the Turkish government in 2016.

Noting that 2021 has been a year with a busy agenda in terms of international political conjuncture, Çavuşoğlu stated that important developments were experienced in Afghanistan, the Middle East, the Balkans, Africa and Asia.

Çavuşoğlu stated that the atmosphere of insecurity continues to dominate the global landscape, and that the increasing power struggle and competition threaten the order of the rules-based relations.

Pointing out that the approach based on short-term interests has gained prevalence, Çavuşoğlu emphasized that the COVID-19 pandemic has also made the existing weaknesses, injustices and deficiencies in cooperation more evident.

Çavuşoğlu pointed out that all countries are trying to adapt their foreign policies to the multipolar and volatile world order.

Explaining that they also saw these trends at the G-20 summit and evaluated the possibilities of finding common solutions to them, Çavuşoğlu stated that Turkey took firm steps with its entrepreneurial and humanitarian foreign policy.

Expressing that Turkey has established multidimensional relations with different power centers at the same table, under equal conditions, Çavuşoğlu noted that on the other hand, it reaches out to the needy, follows a strong and fair diplomacy and works for a "more just world."

Stating that Turkey determined its direction itself, Çavuşoğlu said, "We are aware that peace at home passes through peace in the world. Dialogue and cooperation are our priorities. However, we continue to use the elements of hard power to open up a space for diplomacy when necessary."

Underlining that they follow a dynamic foreign policy, Çavuşoğlu said: "Since our commission meeting last year, we have made 72 overseas visits despite the pandemic conditions. We made more than 260 phone calls and more than 40 videoconference calls. The number of foreign ministers who came to our country is 48, the number of heads of state and government is 33."